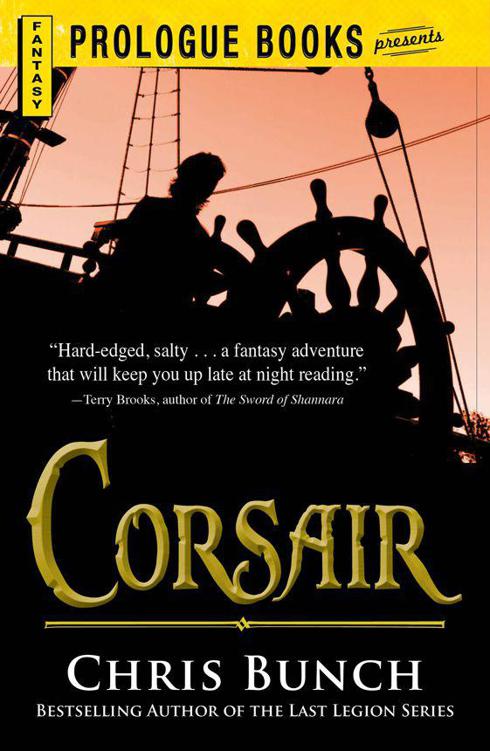 a division of F+W Media, Inc.

To
Elizabeth Rice Bunch
Not too wee, but fierce

Morning, Mage Radnor,” the boy said cheerily. “And could we have a spell for our fishing?”

“If I could summon up the cod, and have them dancing on your doorstep,” the rather rotund, balding man said with a smile, “do you think I’d be sitting here worrying about taxes?”

“Probably,” said the wizard’s wife, Bon, a slender woman some ten years younger than her husband. “Maybe not living here — perhaps with our own fleet, with a fine house in Ticao, like your brother — but you’d still be fretting about the king’s share. Just think how much more it would be if you
could
magic up the finnies.”

“Probably, probably that’s how things would work out,” Radnor said. “Plus the cost of the nets, whether my men were happy, whether I needed to build my own salting plant, and so on and so forth. Best we should be happy with what we have.

“Although I
would
fancy a spell that’d bring up a tiny demon that understood addition and subtraction.”

He got up from the table littered with scrawled papers and broken-tipped quills, and went to the stairs.

There was no reply.

“Over what? What’s there to gloom about?” Knoll N’b’ry said. “The sun’s out, the sea’s almost flat, there’s near no wind, and the title is on the turn.” He raised his voice. “C’mon, Gareth! Tuck your pouty lip back in and stir your stumps!”

Footsteps sounded, and Gareth Radnor came down the winding stairs. He was just fifteen, taller than his friend Knoll, thin, and if it weren’t for his pursed lips and frown, would be considered darkly handsome. He wore heavy canvas pants and a patched sweater.

Without speaking to anyone, he sat by the back door and pulled on tarred canvas knee boots, then stood.

“Good idea,” Knoll said. “Bound to be a chop coming back.”

Gareth didn’t answer, but went out, letting the door bang behind him.

“So it’s his business if he gets wet,” his father said.

Knoll held up his hands helplessly. “He doesn’t listen to me, either,” and went after Gareth.

“There is a temptation,” Radnor said wearily, “to cast a bit of a weather spell after our only son. Nothing more than a half-hour drenching, mind you.”

“Make it a weeklong cascade for all of me,” Bon said.

“I’m sure I wasn’t that big a pain in the sitter when I was his age,” Radnor said righteously.

“And I’m sure you were,” his wife said. “Now, what, assuming the boys have no luck, do you fancy for our evening meal?”

Knoll caught up to Gareth as he went down the cobbled street toward the docks.

“And what’s the matter with you?” he asked. “A night-spirit appear in your bed and then leave before you were satisfied or something?”

Knoll looked at him, sneered ostentatiously, but said nothing. The street flattened, and they passed mostly empty docks.

“Hope we do as well as the fleet,” Knoll said, unable to keep silent for long. “I helped Da load his pots, and said a prayer over every one before dawn.”

“Prayers don’t do any good with fish,” Gareth said.

“And how do you know that? Just because your father’s a magician doesn’t mean you have the Gift,” Knoll said. “Next you’ll be saying magic doesn’t work either. Maybe we should just put fish guts in the traps and let the crabs’ common sense, or lack of it, take charge.”

“Probably do as good as anything else.”

A small boat was tied up at the last, rickety, half-sinking pier. The boat was old, but neatly kept, white with green trim, single-masted, a bit over twenty feet long, with a tiller at the stern. A third boy, almost as thick as he was tall, not quite Gareth’s height, busied himself baiting hooks on a long line and curling the line in a wooden bucket.

“Gareth’s got the pouts,” Knoll said. “I tried chucking his little chin, but he’d have none of it.”

“Can’t have a man going out with the pissies,” the stocky boy said and, surprising for one of his bulk, sprang athletically to the dock. “Come on, Gareth. We’ll need a smile for all the little fishies to admire.”

“Oh I know you will,” Thom Tehidy said happily. “In fact, I guarantee it.”

“Thom, I’m in no mood to be trifled with! I said, leave me alone! We’ve got fishing to do!”

Tehidy picked Radnor up in his thick arms, spun him until he was head down, feet flailing in empty air.

“Now, we dunk him a time or two, nice brackish water down here, look, there’s a turd floating, right under your head, and one, and a two, and — ”

“What do you think, Knoll N’b’ry?” Tehidy said. “Appears to me he’s faking it, and needs a good healthy drink of mother ocean.”

Tehidy obeyed, swinging Gareth around and setting him on the dock.

Gareth looked at his two friends, then started laughing. It was a strong, cheerful sound.

“There,” Knoll said. “Now you’re all better, and we’ll even let you man the rudder on the way out.”

“So what was the problem?” Knoll asked, as the boat tacked out of the harbor under its single sail.

“Everything like how?” Thom said, from his seat below the mast.

Behind them, about a third of a league distant, was the village, climbing up steep cliffs, houses brightly painted, roofs red, blue, green. Occasional clouds drifted above, and the sky was a solid blue. Behind the village, on rising ground to the high moors, were farmhouses and cultivated land. Here and there were the dots of oxen pulling plows, their owners beside the teams.

Two of the royal semaphore towers could be seen leading off into the distance, connecting the village with the capital of Ticao and the rest of the great island of Saros.

Empty beaches and cliffs were on either side of the village, and other settlements could be dimly made out to the east and west.

The sea was greenish blue, low waves gently lifting the boat, a slight breeze blowing across the boat’s thwarts.

“Only the same thing we look at every day, that’s all!”

“What’s the matter with that?” Thom said. “Who wants a change when things are good?”

Gareth growled. “What good? We’re doing the same thing we’ve done every week that somebody doesn’t want us to work on one of the boats, or else helping some clod kicker with his planting! There’s time enough for drudgery in the years to come!”

“I know!” Gareth said. “That’s the problem! For the rest of our lives, pulling fish out of the ocean or shoving seeds in the ground! Over and over and over!”

Thom was looking at him curiously.

“I remember,” he said slowly, “when we were kids, and you were always going on about going off to be a sailor. I mean, a deepwater sailor. Fighting wars.”

“Or being a pirate,” Knoll said.

“I wish I’d stuck to that,” Gareth said sullenly.

“The problem is,” Tehidy said reasonably, “none of us know who to talk to about pirating. Nobody at the semaphore station seems to know the routing for the Royal Loyal Evil and Roistering Pirates.”

“Plus,” N’b’ry put in, “we figured out a long time ago that Old Man Baltit’s stories about pirating seem to be mostly made up, since they keep changing, and he’s just about the only one who’s been away anywhere.”

“You could always run away,” Thom went on. “Find a village that’s on the king’s impressment list, and be taken for the navy. Even though I hear running up and down the mast with some bastard with a rope end hitting you on your butt gets old real fast.

“Or join the coastal guard. Give you a chance to stay in home waters, and prob’ly drown in the first big storm, trying to save some dumb fisherman like me. Or maybe meet real pirates on the wrong end of a cannon.”

“What happened?” Knoll asked quietly. “You normally don’t go off like this.”

Gareth sat staring out at the water. He picked up a bit of salted fish from the bait bucket, chewed at it.

“Dad got a letter this morning, that he’s supposed to pass along to the herald so everybody’ll hear it,” he finally said. “From Vel’s father.”

“Uh-oh,” Thom said quietly. Vel Kese had been the closest thing the village had to a beauty, a year younger than the boys. Her father had run one of the village’s two shops until recently, when he’d announced there wasn’t any money to be made here and moved the family to another village two or three days’ distant. She’d been Gareth’s girl since they were seven or eight, and most of the villagers assumed she and Gareth would eventually marry.

Gareth was considered a good catch, being the son of the village thaumaturge, with seven years of tutoring. Everyone assumed that he’d amount to something more than a fisherman, even though he didn’t show any signs of having his father’s Talent.

“
Hern
Kese is really damned proud to announce that his daughter has become affianced and will soon be the second bride of some asshole cidermaker, who’ll make her very happy and so on and so forth.”

“Makes me wish Dad had let me go off to Ticao and live with my uncle. Instead, I hung around here, and thought that … It doesn’t matter what I thought,” Gareth said.

“Oh the hells with it,” Gareth said. “Let’s start looking for a good place to drop our lines.”

“I thought,” Knoll said, eager for the change of subject, “we’d try back of that seamount you climbed once, to the east, where it shallows.”

“Why not?” Gareth said. “It’s past time I learn to concentrate on making a good life for myself,” he said bitterly. “Whatever the hells that might be.

“I just wish,” he said, after a pause, “something exciting would happen around here.”

The seas around the huge stack, rising abruptly out of the deep waters, were choppy, almost treacherous. Even though all three boys had been in boats since before they could walk, they still kept a wary eye to seaward for the sudden widowmaker that could smash them into the nearby rocks.

They also watched the horizon as the day grew later, saw the village’s crabbers sail home.

Two years earlier, on a dare, Gareth had climbed to the top of the nearby stack, using a grass rope where he could, finding foot- and toeholds in cracks, pulling himself up with the tussocks that grew out of the face. Once a gull had exploded from its nest, almost making him fall. When he reached the top, a tiny plateau not much bigger than his father’s spellcasting floor, he’d held firm against the gusts that tried to send him spinning down into the breakers, wondering why the hells he insisted on making such a damned fool of himself, and then wondered how he would climb down.

Over the Edge of the World: Magellen's Terrifying Circumnavigation of the Globe by Laurence Bergreen
Shadows in Scarlet by Lillian Stewart Carl
Revenger 9780575090569 by Alastair Reynolds
Next Door to Romance by Margaret Malcolm
For the Love of a Soldier by Victoria Morgan
The Crossing: A Zombie Novella by McKinney, Joe
Covenant With the Vampire by Jeanne Kalogridis
Bells and Chains (Operation Reindeer Retrieval Book 7) by Viola Grace
All the Time in the World by Caroline Angell
Dead Watch by John Sandford