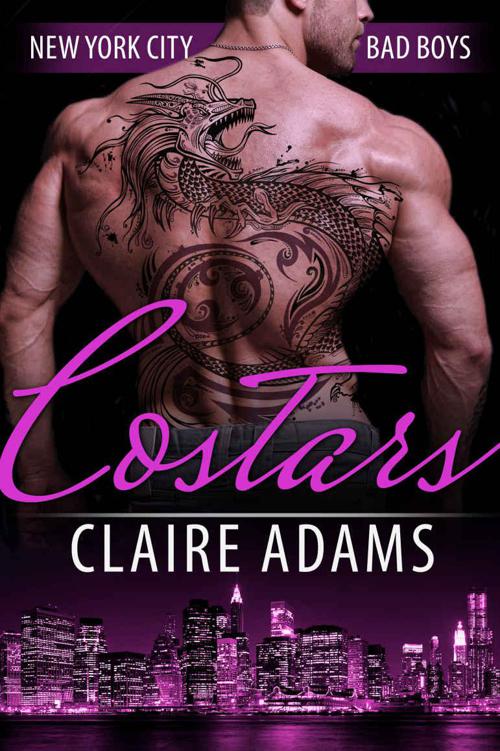 This
book is a work of fiction. The names, characters, places and incidents are
products of the writer's imagination or have been used fictitiously and are not
to be construed as real. Any resemblance to persons, living or dead, actual
events, locales or organizations is entirely coincidental.

Newsletter
:
–
Click
here to get an email as soon as the next book in the series is available.

This is it. Today’s the day.

I’ve been waiting for this moment all my
life and now that it’s here, I wish I were somewhere else. I wish I were
someone else.

It’s not that I lack gratitude or an
understanding of just what a big deal this moment is for me personally as well
as professionally. I’m nothing but gratitude right now.

No, what’s bothering me is that I can’t
remember any of my lines and I’m going to be working with quite possibly the
greatest actor of my generation: Damian Jones.

The problem with reaching the top is that
there are other people, people who have been there for a while. I’ve been
rather clever so far, working in near anonymity and only ever being recognized
as that chick from that tampon commercial.

It’s not the best kind of notoriety I
could have hoped for, but it paid the rent.

Now, though, all eyes are going to be on
me, and I know exactly what everyone’s thinking. They’re all just sitting back,
waiting and hoping that they’ll have a front row seat when I inevitably prove
just how unqualified I am to be here.

Or maybe that’s just my own personal
insecurity.

Regardless, I think it’s time that I start
betting against myself here. My cheeks have been red for the last ten minutes,
and I’ve been having a hell of a time breathing at what anyone might consider a
natural pace.

“Emma,” Lane, my on-set assistant, says,
poking his head through the door of my trailer, “they’re ready for you.”

I take a breath.

Ten minutes later and I’m back in my
trailer, waiting for them to get the lighting set up for the next scene.

I’ve been in movies before, just nothing
you would have seen. There were a few low-budget, sci-fi flicks where I was
either the lusty heroine or, more likely, damsel in distress who is rescued by
the super-power-wielding hero, or I was the space vixen who’s basically just
walking cleavage that completely fails as a character.

My biggest moment before landing this film
was in
Mega Leopard vs.
Megalodon
IV: Rise of the Phoenixes
, where I had a
thirty-second monologue in which I’m trying to reassure the rest of the
captives—all buxom women like myself, each character with a different reason
why the front of her shirt is torn open, exposing everything but areola—they’re
going to survive the machinations of the Cult of
Megalodon
culminating in the glorious words, “We are not fodder for monsters; no! We are
women and women fight!”

Sure, it’s a nice thought from a feminist
standpoint, but the writing left a lot to be desired.

Now, though, I’m on the set of a motion
picture that doesn’t only have one of Hollywood’s biggest stars, but it
actually has financial backing and a decent script.

It should be a lot harder to be cynical,
but I’m starting to find myself longing for the days where the director didn’t
care if the lighting was right or whether the sun was two hours higher in the
sky in one shot than it is in the next. At least then, I could put in a day’s
work and be done.

Now, all I have is time to sit here and
freak out because of where here is.

Lane opens the door to my trailer to ask
me if I need anything. I ask him what he means by anything.

“I don’t know,” he says. “Are you hungry,
thirsty? Is there anything I could bring you that would help to pass the time?
I could read lines with you, whatever you need.”

“If I were to ask you to do something to
help me pass the time, you’d probably do it?” I ask.

“So if I were to tell you that I wanted an
eight ball of coke, two hookers of questionable character and gender, a fifth
of Jack, along with a quarter of whatever they were giving Snoop
Dogg
back in the early two thousands, and, just to round it
out, at least a dozen people old enough to die in a war but not old enough to
drink legally with whom I can enjoy all of the above with me, you’d do it?” I
ask.

“Obviously,” he says, “I couldn’t
knowingly participate in an illegal action. That said, I haven’t really checked
the laws that recently, so I may miss a few things.”

“Excellent,” I tell him.

“So, did you actually want any of that or
were you just looking to prove a point?” he asks. “My hooker guy likes to have
as much notice as possible—otherwise he has a lot more trouble finding just the
right one.”

“I guess we’ll never know,” he says. “Is
there anything I can get you?”

He leaves the trailer and I take a moment
to really appreciate the fact that I have, at my beck and call, someone who has
a “hooker guy.”

There’s a knock on my trailer door and I
call for whoever’s there to come in.

“Hey, I just wanted to see how you were
settling in,” a very familiar voice says.

I look up and there, ducking his head as
he enters my trailer, is Damian Jones.

“Shit,” I say and try to stand up,
managing to bend everything except my knees in the process. If it looks half as
awkward as it feels, I’m in serious trouble.

“You don’t have to get up,” he says, a
partial smile on his full lips.

It helps that his dirty blond hair always
looks like it’s five minutes out of the stylist and that he’s frequently
beefing up for this or that role.

He’s ducking his head a little as he makes
his way over to my makeshift couch. He doesn’t find a spot and so ends up
sitting on my coffee table.

“Just as well,” I tell him. “My legs seem
to have forgotten how to work. I’m Emma Roxy.”

No matter what I do at this point, his
first impression of me is going to involve the word clumsy. All I have left is
the remote possibility that I can add the word charmingly to the front end of
the title.

“I’ve seen some of your work,” he says. “You’re
good. To tell you the truth, I always thought you weren’t getting the kind of
roles that you deserved.”

“Thanks,” I tell him, wondering if I
should have put a question mark at the end of the statement. “I’m obviously a
great admirer of yours as well.”

“So, I hear you got your first scene in
and done. How’d that go?” he asks.

My phone starts ringing on the coffee
table next to Damian and for whatever reason I decide that I don’t want Damian
Jones to see who’s calling me. No, it doesn’t make any sense, but I’m still
pretty new to this.

I snatch the phone off the table and mute
it with my thumb.

Damian is looking up at me, but he’s not
saying anything.

“You’re Damian Jones,” I tell him, “and
you’re sitting on my coffee table.”

“Sorry about that,” he says, getting up.
“You had to have known that we’d cross paths at one point or another, though,
right?” he asks. “We are the main romance plot to the film, you know.”

“No point. So,” he says with a flash of
his dark green eyes, “are you into tall, handsome actors?”

“You know, for someone who’s always in the
tabloids with a different woman on his arm, I would have thought you’d have a
lot more game,” I tell him.

“You’re hitting on me,” I tell him, “and
you’re not the slightest bit good at it. Maybe it’s just one of those sad
things that tend to happen when fantasy meets reality.”

“Let’s start with tobacco and go from
there,” he says.

“That’s good,” he says. “It’s terrible on
the lungs and it makes you age like crazy.”

“I was going to see if you’d be cool with
me lighting up a cigarette in here,” he says.

“
It’s
fine,” I
tell him without thinking. “Just open a window.”

“I think I’d better not,” he says. “You’re
not a smoker, so you’re going to get sick of the smell really fast.”

“I heard you were nervous,” he says. “I
also heard that you were trying to throw a party for teenagers involving
cocaine and prostitutes and I wanted to see if you were actually that jaded—I
was coming here to make sure I got an invite if it went that way—or if you’ve
just got a sense of humor.”

“And,” he says, “I have found that I’ve
still only just met you and couldn’t possibly pass that kind of judgment so
quickly.”

“Oh, you’ve got your own trailer ritual,
huh?” he asks. “Carl Ivan had one of those that involved a rubber turkey leg, a
pint of Southern Comfort, and a still of
Stockard
Channing from
Grease
. He never really
said how it worked or even whether it worked or not. Come to think of it, I’m
not sure exactly what he was hoping to accomplish, but—”

“You’re a very strange man,” I tell him.