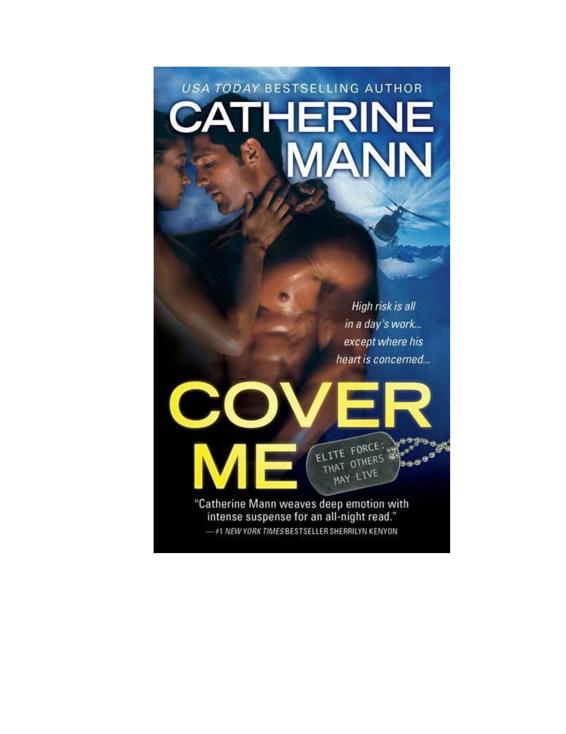 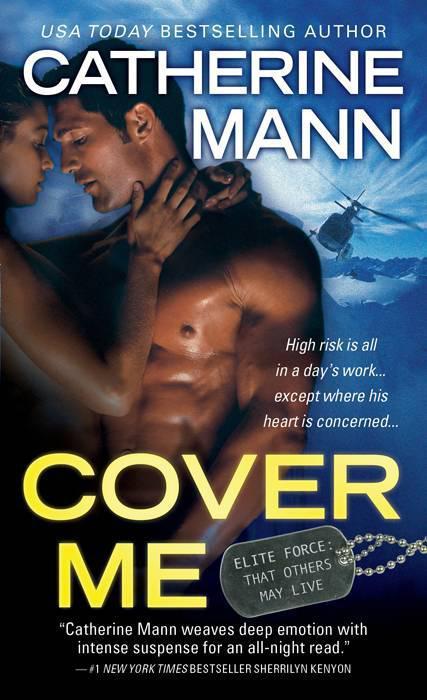 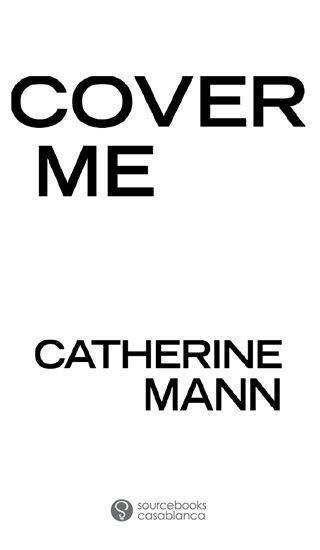 The characters and events portrayed in this book are fictitious or are used fictitiously.

Any similarity to real persons, living or dead, is purely coincidental and not intended by the author.

To my husband Rob and our four miracles—Brice, Haley, Robbie, and Maggie. I love

It was a cold day in hell for Tech Sergeant Wade Rocha—standard ops for a mission in Alaska.

He slammed the side of the icy crevasse on Mount McKinley. A seemingly bottomless crevasse. That made it all the more pressing to anchor his ax again ASAP. Except both of his spikes clanked against his sides while the underworld waited in an alabaster swirl of nothingness as he pinwheeled on a lone cable.

Wade scratched and clawed with his gloved hands, kicked with his spiked shoes,

reaching for anything. The tiniest of toeholds on the slick surface would be good right about now. Sure he was roped to his climbing partner. But they had the added load of an injured woman strapped to a stretcher beneath them. He needed to carry his own weight.

Chunks of ice and snow pelted his helmet. The unstable gorge walls vibrated under his gloved hands.

Focus narrowed, Wade tightened his grip on his rope. He’d earned his nickname, Brick, by being the most hardheaded guy in their rescue squadron. Come hell or high water, he never gave up.

Each steady breath crackled with ice shards in his lungs, but his oxygen-starved body welcomed every atom of air. Lightning fast, he grabbed the line tying them together and worked the belay device.

“I got ya, Brick. I got ya,” Franco chanted through the headset. Intense. Edgy. Nothing was out of bounds. Franco would die before he let him fall. “It’s just physics that makes this thing work. Don’t overthink it.”

And it did work. Wade stabilized against the icy wall again. Relief trickled down his spine in frosty beads of sweat.

He keyed up his microphone. “All steady, Slow Hand.”

“Good. Now do you wanna stop horsing around, pal?” Franco razzed, sarcastic as ever.

“I’d like to get back before sundown. My toes are cold.”

Wade let a laugh loosen the tension kinking up his gut. “Sorry I inconvenienced you by almost dying there. I’ll try not to do it again. I’ll even spring for a pedicure, if you’re worried about your delicate feet chafing from frostbite.”

“Hey, Franco? Thanks for saving my ass.”

“Roger that, Brick. You’ve done the same for me.”

And he had. Not that they kept score. Wade recognized the chitchat for what it really was—Franco checking to make sure he wasn’t suffering from altitude sickness due to their fifteen thousand foot perch. They worked overtime to acclimate themselves, but the lurking beast could still strike even the most seasoned climber without warning. They’d already lost one of their team members last month to HACE—high altitude cerebral edema.

He shook his head to clear it. Damn it, his mind was wandering. Not good. He eyed the ledge a mere twenty feet up. Felt like a mile. He slammed an ice ax in with his left hand, pulled, hauled, strained, then slapped the right one in a few inches higher. Crampons—ice cleats—gained traction on the sleek side of the narrow ravine as he inched his way upward.

Slow. Steady. Patient. Mountain rescue couldn’t be rushed. At least April gave them a few more daylight hours. Not that he could see much anyway, with eighty-mile-per-hour wind creating whiteout conditions. Below, his climbing partner was a barely discernible blur.

Hand over hand. Spike. Haul. Spike. Haul. He clipped his safety rope into a spike they had anchored in the rock on the way down. Scaled one step at a time. Forgot about the biting wind. The ball-numbing cold.

The ever-present risk of avalanche.

His arms bulged, the burden strapped to his harness growing heavier.
Remember the
mission. Bring up an unconscious female climber. Strapped to a litter. Compound fracture in her
leg.

His job as a pararescueman in the United States Air Force included medic training. Land, sea, or mountain, military missions or civilian rescue. With his brothers in arms, he walked, talked, and breathed their motto, “That Others May Live.”

Muscles burning, he focused upward into the growl of the storm and the hovering

military helicopter. A few more feet and he could hook the litter to the MH-60. Rotors
chop,
chop, chopped
through the sheets of snow like a blender.

The crevasse was too narrow to risk lowering a swaying cable. Just one swipe against the narrow walls of ice could collapse the chasm into itself. On top of the injured climber and Franco.

On top of him.

So it was up to
him
—and his climbing partner—to pull the wounded woman out. Once clear, the helicopter would land if conditions permitted. And if not, they could use the cable then to raise her into the waiting chopper.

Wind slammed him again like a frozen Mack truck. He fought back the cold-induced

mental fog. At least when Hermes went subterranean to rescue Persephone from the underworld, he had some flames to toast his toes.

Wade keyed his microphone again to talk to the helicopter orbiting overhead.

“Fever”—he called the mission code name—“we’re about five minutes from the top.”

Five minutes when anything could happen.

“Copy, the wind is really howling. We will hold until you are away from the crevasse.”

The rest of his team waited in the chopper. They’d spent most of the day getting a lock on the locale. The climber’s personal locator beacon had malfunctioned off and on. Wade believed in his job, in the motto. He came from five generations of military.

But sometimes on days like this, saving some reckless thrill seeker didn’t sit well when thoughts of people like his mother—wounded by a roadside bomb in Iraq, needing his help—hammered him harder than the ice-covered rocks pummeling his shoulder. How damned frustrating that there hadn’t been a pararescue team near enough—he hadn’t been near enough—to give her medical aid. Now because of her traumatic brain injury, she would live out the rest of her life in a rehab center, staring off into space.

He couldn’t change the past, but by God, he would do everything he could to be there to help someone else’s mother or father, sister or brother, in combat. That could only happen if he finished up his tour in this frozen corner of the world.

As they neared the top, a moan wafted from the litter suspended below him. Stabilizing the rescue basket was dicey. Even so, the groans still caught him by surprise.

The growling chopper overhead competed with the increasing howls of pain from their patient in the basket. God forbid their passenger should decide to give them a real workout by thrashing around.

“Franco, we better get her to the top soon before the echoes cause an avalanche.”

“Picking up the pace.”

Wade anchored the last… swing… of his ax… Ice crumbled away. The edge shaved

And cleared the edge.

Franco’s exhale echoed in his ears. Or maybe it was his own. Resisting the urge to sprawl out and take five right here on the snow-packed ledge, he went on autopilot, working in tandem with Franco.

Climbing ropes whipped through their grip as they hauled the litter away from the edge.

Franco handled his end with the nimble guitarist fingers that had earned him the homage of the Clapton nickname, Slow Hand. The immobilized body writhed under the foil Mylar survival blanket, groaning louder. Franco leaned over to whisper something.

Wade huffed into his mic, “Fever, we are ready for pickup. One survivor in stable condition, but coming to, fast and vocal.”

The wind-battered helicopter angled overhead, then righted, lowering, stirring up snow in an increasing storm as the MH-60 landed. Almost home free.

Wade hefted one end, trusting Franco would have the other in sync, and hustled toward the helicopter. His crampons gripped the icy ground with each pounding step. The door of the chopper filled with two familiar faces. From his team. Always there.

With a
whomp
, he slid the metal rescue basket into the waiting hands. He and Franco dove inside just as the MH-60 lifted off with a roar and a cyclone of snow. Rolling to his feet, he clamped hold of a metal hook bolted to the belly of the chopper.

The training exercise was over.

Their “rescue” sat upright fast on the litter, tugging at the restraints. Not in the least female, a hulking male pulled off the splint Wade had strapped on less than a half hour ago.

Wade collapsed against the helicopter wall, exhausted as hell now that he could allow his body to stop. “Major, have you ever considered an acting career? With all that groaning and thrashing about, I thought for sure I was carting around a wounded prima donna.”

Major Liam McCabe, the only officer on their team and a former army ranger, swung his feet to the side of the litter and tossed away the Thinsulate blanket. “Just keeping the exercise real, adding a little color to the day.”

The major tugged on a helmet and hooked into the radio while the rest of his team gaped at him—or rather, gaped at McCabe’s getup. He wore civilian climbing gear—loud, electric yellow, with orange and red flames that contrasted all the more up next to their bland sage green military issue. Laughter rumbled through the helicopter. The garish snow gear had surprised the hell out of him and Franco when they’d reached the bottom of the chasm. They’d expected McCabe, but not an Olympic-worthy ski suit.