“We’re going to get you both out of here. I swear it.”

A dead woman and child. He resisted the urge to tear through the rocks with his bare hands and to hell with waiting on the crews above. He stowed his gear, twisting to avoid that damn stone stabbing his side.

“Hey,” Amelia whispered, “That was supposed to be a joke.”

“Right, got it.” Admiration for her grit kicked through his own personal fog threatening to swallow him whole. “You’re a tough one. I think you’re going to be fine.”

“I’m a county prosecutor. I chew up criminals for a living.”

“Atta girl.” He settled onto his back, watching the hypnotic drip, drip. His fingers rested on her wrist to monitor her pulse.

She sniffed. “I prefer to be called a woman or a lady, thank you very much.”

“Where I come from, it’s wise not to be nitpicky with the person who’s saving your ass.”

“Score one for you.” She scraped a torn fingernail through the dust on the ground. Her sigh stirred the dust around that shaky line. “I’m good now. So you should go before this building collapses on top of you and keeps you from doing your job for other people.”

“I don’t have anywhere else to be.” He ignored a call from McCabe through his headset that pretty much echoed the woman’s words. “The second they give the go ahead, I’m hauling you out of here, Amelia Bailey.”

“And Joshua. I want you to promise you’ll take care of him first.”

“I will do what I can for him,” he answered evasively.

Her wide eyes studied him for seven drips of the IV before she cleared her throat. “You don’t think he’s alive, do you? I can feel his pulse.”

“I’m not imagining it, damn it.” Her hand flipped and she grabbed his arm, her ragged nails digging deep with urgency. “I can feel his pulse in his wrist. He’s a little chilly, but he’s not cold. Just because he’s not screaming his head off doesn’t mean he’s dead. And sometimes, he moves. Only a little, but I feel it.” Her words tumbled over each other faster and faster until she dissolved into a coughing fit.

Ah, to hell with it. He unhooked his canteen. “Wet your mouth. Just don’t gulp, okay? Or they’ll kick my butt up there.”

He brought the jug to her lips and she sipped, her restraint Herculean when she must want to gulp. Sighing, she sagged again, her eyes closing as she hmmmmed, her breathing evening out. He freaked. She needed to stay awake, alert.

“Tell me about your son Joshua.” He recapped the canteen without wasting a swallow on himself.

Her lashes fluttered open again. “Joshua’s my nephew. I came with my brother and his wife to help them with the paperwork for their adoption. They don’t want any legal loopholes.

What happens to Joshua if they’re…?”

She bit her lip.

His brain raced as he swept the light along the rubble, searching for some signs of others.

Although if they’d been outside, chances were next to nil. All the same, he made sure they heard upstairs, by speaking straight into his mic as he asked her, “Where were your brother and sister-in-law when the earthquake hit?”

“They were in the street, right outside the hotel. They went outside to buy lunch. They waited until Joshua was asleep so he wouldn’t miss them.” Her voice hitched. “I promised I would take care of him.”

“And you have.” He pinned her with his eyes, his determination, the swath of light steady on her face. “If your family is outside, they stood a much better chance of being okay. They’re probably over in one of the camps right now going nuts trying to find you.”

“I’ve read stories about how babies do better because they have more fat stores and they don’t tense up or get claustrophobic.” Her eyes pleaded with him. “He’s just napping, you know.”

jackhammered ceiling. The world closed in to just this woman and a kid he couldn’t see. Too clearly he could envision his wife and his daughter, trapped in the wreckage of a crashed plane.

Marissa would have held out hope for Tilly right to the end too, fighting for her until her nails and spirit were ragged.

The vise on his brain clamped harder, the roar in his ears louder, threatening his focus.

“I’m changing your IV bag now, so don’t wig out if you feel a little tug.”

She clenched her fist. “You must get pretty jaded in this line of work.”

“I’ve got a good success rate.” He didn’t walk away from tough odds. Every mission was do or die for him.

“About my foot,” she started hesitantly, “am I imagining it’s okay? Be honest. I won’t panic. I need to be prepared.”

“The mind does what it needs to in order to survive. And that’s what you need to focus on.”

Not that it had mattered in the end for Marissa or Tilly. They’d died in that plane crash, their broken bodies returned to him to bury along with his will to live. A trembling started deep inside him. His teeth chattered. He dug his fingers into the ground to anchor himself into the present. Amelia Bailey would not die on his watch, damn it.

But the trembling increased inside him. Harder. Deeper. Until he realized… the shaking wasn’t inside, but outside.

The ground shuddered with another earthquake. 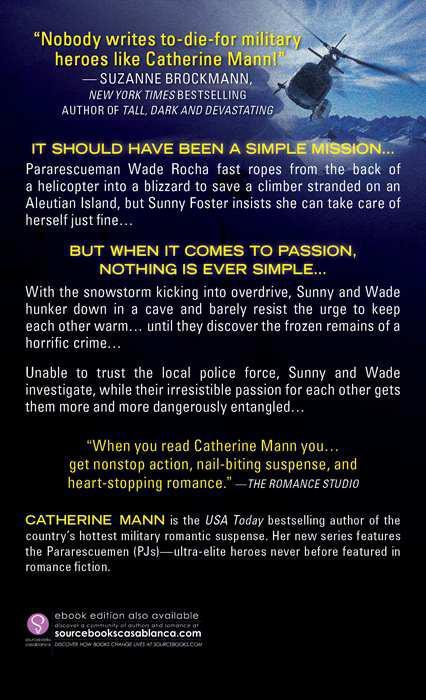