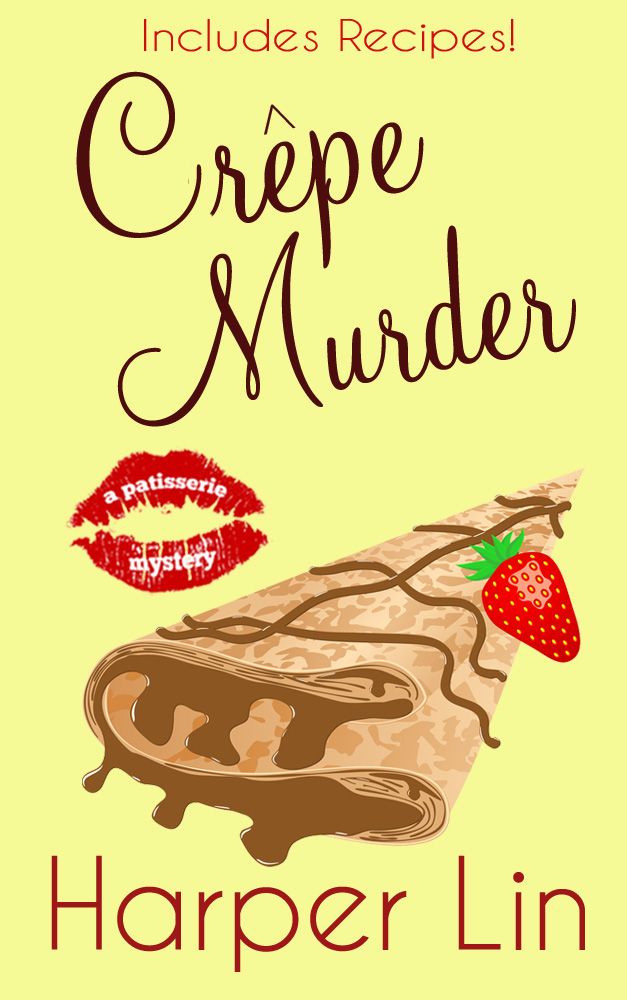 This is a work of fiction. Names, characters, organizations, places, events and incidents are either products of the author’s imagination or are used fictitiously. Some street names and locations in Paris are real and others are fictitious.

No part of this book may be reproduced, or stored in a retrieval system, or transmitted in any form or by any means, electronic, mechanical, photocopying, recording, or otherwise, without express written permission of the author.

Clémence Damour and her head baker, Sebastien Soulier, had just made another batch of their latest invention. It was a croissant, but not just any average buttery French croissant. This one had an American influence.

“Are you sure you want to make an
apple pie
croissant?” Sebastien peered at the limp flaky pastries on the tray and wrinkled his nose. “These are not quite right either. I don’t even have to try them.”

This was their third batch of the day. The first batch had been too sweet and overpowering. Clémence thought the second batch had promise until she took a bite and realized it was too crunchy. And now the third batch simply looked weird.

“They’re more like apple turnovers.” Sebastian continued. “It’s going to be a challenge to get the right balance of apples and cinnamon in a light-as-air croissant.”

Clémence took a bite. She liked the taste of the croissant, to her surprise. She had always enjoyed American-style pastries and desserts, since she was half American herself, but because their customers were mostly French, their products couldn’t be too greasy, dense, or sweet.

“Fine.” Reluctantly, Sebastien chewed. “The apples are a little too mushy. Are you sure you want to stick with Granny Smith apples? I’m thinking we can branch out with something more unique, like Pink Lady apples.”

“My grandmother in Boston always uses Granny Smith apples. In her apple pies, that is.”

“But we’re not making an American pastry here. We’re trying to come up with something to appeal to the French. Pink Lady apples are a good balance of sweet and tart. We might be able to cut down on some of the sugar in the recipe too.”

Clémence took another bite just to be sure. The apples were mushier than she would’ve liked. They used too much cinnamon this time too. It was close, but not quite right. Trying a different apple could help tweak the taste a bit.

“I’m open to trying different apples,” she said. “Why don’t I go to the open air market tomorrow morning and pick up a few different tart apples? We’ll continue this experiment tomorrow.”

Sebastien smiled. “
Merci
. I’m glad you’re in agreement, for once.”

Clémence and Sebastien had a great working relationship, but sometimes they differed in taste. While they ultimately agreed on what made the cut and what didn’t, sometimes they had to make compromises in getting to the end product.

“We can also try cutting the apples into thinner slices,” said Clémence. “Maybe it’ll help cut down on the density.”

“Yes, I was just going to suggest that too.”

Sebastien lifted the tray from the table to chuck the croissants in the garbage, but Clémence stopped him.

“Come on,” said Clémence. “They’re not that bad. They’re still good enough for the average person to consume.”

As bakers, they both had perfectionist tendencies in the kitchen. Anybody else would’ve thought that the croissants were delicious. Sebastien and Clémence held themselves to a much higher standard.
Damour
was, after all, one of the best patisseries in Paris.

This was Sebastien’s first year working as head baker. He had ambitions to ultimately be one of the
Meilleurs Ouvriers de France
, the best craftsman in France. It was a prestigious award and he wanted to win in the pastry chef category. While he was already talented, he wanted to perfect his craft before he entered. This meant he had to work extra hard to be innovative, while adhering to the classic expectations of French consumers. It was a fine balance that Clémence would overstep had she worked alone. It was why she was glad to have Sebastien and the team working while her parents, the founders of
Damour
, were in Asia for the next few months.

Clémence looked at her watch. “It’s almost four. I’m off.”

“Where are you going so early in the work day?”

“I want to check out this painting class,” said Clémence. “My friend Ben recommended it. The teacher said I could drop by and see what they’re working on.”

“I thought you already have a degree in painting,” said Sebastien. “Why are you taking more classes?”

“That was for classical painting and art history. Sure, I learned the techniques, but I always feel confined when I paint in some old master’s style. It’s beautiful, but I’ve decided that it’s not the kind of style I want to pursue. The teacher is from Brazil, and I hear she’s more open-minded and experimental. Maybe she’ll help me loosen up and find my own style.”

“Sounds good. You know, I haven’t seen any of your artwork. Is it online anywhere?”

“No,” said Clémence. “I haven’t done anything I’m that proud of yet, so I won’t show them until I start producing some good pieces.”

“That’s funny,” said Sebastien. “You’re always experimenting and open to trying new things in the kitchen, but you make it sound like you’re the opposite when you’re in front of the easel.”

“Same here with culinary school. One of my teachers was terrifying.”

“Then how did you get to be so open?”

Clémence beamed. “That’s good to hear. They’ve always been supportive. I think it helps that my mom had an American way of upbringing, where there’s an emphasis on encouragement rather than pointing out faults.”

“How are they by the way? Are they still in Japan?”

“I think they’re back in Hong Kong. They’re overseeing the recipes for the salon de thé. You should see the menu. Dad emailed it to me last night. It’s Chinese-French fusion food, and there’s even French-inspired Dim Sum. I can’t imagine how it tastes.”

“That sounds amazing. It’d be so neat to go to a
Damour
in a different country. I wonder if it’ll be like a parallel universe, with different versions of ourselves.”

Clémence laughed. “Probably. I can imagine a Chinese version of you in the Hong Kong kitchen, intensely focused on making a Jasmine tea macaron or something.”

She put the remaining six apple pie croissants in a plastic container.

In fact, she was planning on giving them to Arthur Dubois, her official boyfriend of two weeks. He was a neighbor. His family lived on the third floor of her building. A Ph.D. Student, Arthur lived in one of the
chambres de bonne
, a single room on the top floor, where the servants used to live back in the old days.

Arthur had a big family. There were seven kids in the Dubois household in total. Arthur and his brother Theo both lived in
chambres de bonne,
which were comparable to dorm rooms, while the other siblings lived in the main apartment. His parents still didn’t know that Clémence was dating Arthur. Clémence’s parents didn’t know either. The young couple wanted their relationship to remain under wraps for the time being, since they were still getting to know each other and didn’t want to experience pressure or scrutiny from their elders. She liked the way things were going in the relationship, and didn’t want to rush anything. For now, they were simply enjoying each other’s company.

She said goodbye to Sebastien and the rest of the staff in the kitchen, and then passed through the salon de thé on her way out. Since it was mid-afternoon, the customers were mostly drinking coffee or tea and eating desserts. She smiled as she passed them, while taking a peek at what they were eating.

A cute brunette girl with a short pixie haircut caught her eye. She had big brown eyes, dimples, and looked to be in her mid-twenties. Short hair was hard to pull off, but it suited the girl’s feminine features.

There was also something familiar about her. Had Clémence met or seen her somewhere before? Maybe she was a celebrity. It wasn’t unusual to see celebrities eating at
Damour
. Just last week, Marion Cotillard and Guillaume Canet were spotted eating lunch there. Her friend Celine, one of the hostesses, had almost fainted. She was a huge fan of Guillaume Canet and had nearly been hysterical when she ran back into the kitchen to tell Clémence and Berenice who was in the salon.

As Clémence passed by the pixie-haired brunette, she glanced at what she was eating: a dark chocolate crêpe with
chantilly
—whipped cream—and strawberries on the side. She had good taste, as it was also the crêpe of Clémence’s choice.

She had been so distracted by the girl and her crêpe that she didn’t notice the man she was dining with until it was too late. He was also eating a dark chocolate crêpe. She looked up, inadvertently making eye contact with him.

Carlos.
She knew him. Tall, dark haired, square jawed, a muscular built. He was as handsome as a prince, and certainly charming, especially when he spoke with such a sexy Spanish accent. She thought she’d never see him again. What was he doing in Paris?

Clémence and Carlos both averted eye contact immediately. He became preoccupied with cutting a piece of his crêpe, and Clémence couldn’t get away fast enough.

She had met Carlos almost two years ago, a month after she started her travels around the world. In a fancy hotel bar in Berlin, Carlos came over and introduced himself, saying that he was visiting from Madrid. Clémence and her two American friends, Jessica and Emily, whom she’d been traveling with at the time, all thought Carlos was cute. He was also a bit mysterious, as he didn’t reveal details about himself freely.

Apparently he was on vacation, traveling around Europe alone. After a fun evening with the girls, he decided to come along with them to Hungary at the last minute. Carlos dressed in designer clothes and wore a Rolex, so she assumed he was well off. When Emily pressed him for more details about himself, he’d smoothly insinuated that he was a person of importance, but that he was traveling incognito so bodyguards weren’t necessary.

When they were back in their hotel room, the girls speculated whether he was Spanish royalty or a rich heir with a lot of time to waste. While the three girls were all well-off, they had started out the trip with the intention of staying in hostels to meet other international travelers and to really get into the backpacking experience. But now that they had met Carlos, they were more than happy to change their plans to stay at the 5-star hotels that he recommended, figuring that spending time with Spanish royalty would be a more memorable experience.

Clémence found him intriguing as well. Carlos certainly carried himself in a royal manner. He was a gentleman, knew his wines and table etiquette, and everyone in the hotels treated him with the utmost respect. He was also a welcome distraction since she was fresh from a breakup with her ex Mathieu. Carlos was flirtatious with all of them, but Clémence thought he was interested in her because he’d asked her the most questions.

Sun Poisoned (The Sunshine Series) by Rae, Nikki
The Secret Ministry of Ag. & Fish by Riols, Noreen
Amaryllis by Jayne Castle
Fin & Matt by Charlie Winters
All Falls Down by Morgen, Ayden K.
Heaven Saga 1: The Lost Hero by Marcus Johnson
Blink by Rick R. Reed
Dark Omens by Rosemary Rowe
The Flower Reader by Elizabeth Loupas
The Stormcaller: Book One Of The Twilight Reign by Tom Lloyd