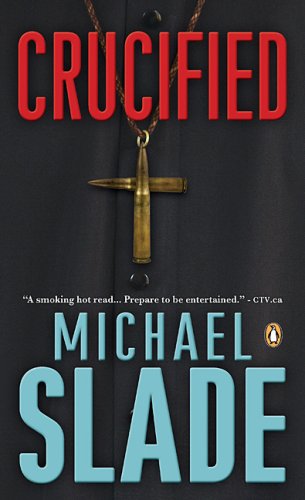 As devil's advocate,
MICHAEL SLADE
has acted in over one hundred murder cases, and has argued a dozen appeals in the highest court.

His specialty is the law of criminal insanity.

in Great Britain and the USA by

All Severn House titles are printed on acid-free paper.

And Satan entered into Judas,

who was surnamed Iscariot,

one of the twelve.

When the existence of the Church

is threatened, it is released from

the commandments of morality.

With unity as the end, the use of

every means is sanctified, even

deceit, treachery, violence, simony,
prison, death. For all order is for

the sake of the community, and the

individual must he sacrificed to the
common good.

Sunlight sparked off the hammer as the Roman nailed the wrist of the supine Jew to the crossbar that would surmount his execution post. The spike that pushed through the flesh was seven inches long, with a square head crowning a tapered shaft. As the legionary labored, insects buzzed around the Jew's wounds, birds of prey circled the crest of the hill, and a gathering mob taunted the doomed man. Nearby, soldiers boisterously cast lots for the Jew's robe, having stripped him of all but his loincloth. A woman—possibly his mother—sobbed as the spike passed through the nerve, causing the fingers to curl like claws.

The nail sank deep into the rough-hewn wood.

Devised by the Persians and brought to the Mediterranean by Alexander the Great, crucifixion was raised to an art by the Romans. To communicate its unbearable pain, they coined the word
excruciatus,
meaning "out of the cross." By law, the citizens of Rome could not be crucified. It was a disgrace reserved for slaves, barbarians, and those who—like this "messiah"—preached heresy against Pax Romana.

This hammer-wielding Roman was a master at crucifixion.

He drove the nail between the bones of the wrist because he knew the flesh of the palms wouldn't support the weight of the body. He was careful not to break the bones or pierce the arteries, for his aim was to kill the Jew as slowly and as agonizingly as possible. Having impaled the central nerve and several liga-ments, the spike would shoot bolts of fiery pain up this arm until the wretch expired.

The heat of the midday sun drenched the Roman in sweat.

He finished hammering the head of the nail down to the skin of the wrist and then crawled around to the other end of the
patibulum.

Aided by a cohort who tugged the Jew's free arm along the crossbar, he began to pound a spike into that wrist too.

The man being crucified was already half-dead. Earlier, he'd been scourged with a whip called a
flagrum
, the lead-tipped leather thongs tearing his back to shreds. With a crown of thorns shoved down around his brow, he'd then been forced to carry this heavy crossbar from Jerusalem to Golgotha, the execution mound beyond the city's walls. Unable to bear the burden, he'd stumbled along the way, until a passerby was commandeered to help shoulder the weight. Up this rugged hill they'd come, with a Roman centurion leading the procession and a soldier carrying a sign announcing the Jew's name and his crime.

erected on the hill. Once the horizontal
patibulum
was fitted into its slot, completing the cross, the hammer man bent the Jew's legs at the knees and positioned one foot over top of the other. Then he nailed them through the arches to the vertical post. Finally, the sign—the
titulus
in Aramaic, Latin, and Greek—was pinned to the cross above the crucified Jew's head as a warning to others.

Jesus of Nazareth, king of the Jews.

Taunts from the mob grew louder as the executioner stepped back to admire his handiwork. He'd ensured the death would be as slow as possible, with maximum suffering. Crucifixion killed in as little as three to four hours or as much as three to four days, depending on how much blood the victim lost during the lashing.

So weakened was this Jew from the severity of his beating that the Roman was certain he would be dead by sunset.

Death would be by asphyxiation. Normally, breathing in is an active process, breathing out a passive one. Here, the weight of the Jew's body pulling down on his shoulders and outstretched arms would tug his chest muscles into a fixed state of inhalation.

To exhale, he would have to push up on his impaled feet and flex his elbows, causing the pierced nerves to shoot pain through his body. His flayed back would scrape against the rough wood of the upright post, opening the wounds for greater loss of blood.

"I thirst," the Jew murmured in a voice that could barely be heard. That, too, required exhaling.

One of the soldiers offered him wine vinegar from a sponge raised on a rod.

The Roman guards couldn't leave until this Jesus was dead, so the man who'd nailed him to the cross whiled away the time by watching the so-called king of the Jews pay for his heresy.

With the descent of the sun, the shadow of the cross crept over the execution mound until ominous clouds blotted out the blue sky with angry gray.

"That's the price," the Roman snarled, "of refusing to bow to us. Just as your shadow has vanished from the face of the earth, so you will be forgotten."

But the shadow of the cross continued to elongate until it reached through the centuries for almost two thousand years to the here and now.

Clang!
The sound of metal striking metal ground the bulldozer to a halt. Reversing the earthmover, the driver leaned out of the cab to peer around the dusty windshield. In front of the blade, there appeared to be an aluminum shark's fin jutting from the dirt.

"Verdammt
/" the road builder cursed in German. How long would resurrecting the past stall his work?

It took them a day to unearth the plane, but finally they could read the nickname painted below the cockpit window of the long-lost Second World War bomber.

The
Ace of Clubs.

Apeshit by Carlton Mellick, Iii
First Impressions by Josephine Myles
Trifariam, The Lost Codex (2012) by Diego Rodriguez
9:41 by Iannuzzi, John Nicholas;
Palace by Katharine Kerr, Mark Kreighbaum
You Don't Love Me Yet by Jonathan Lethem
Asking for Trouble by Anna J. Stewart
A Somers Dream by Isabel, Patricia
Any Which Wall by Laurel Snyder
Thunder Dog by Michael Hingson