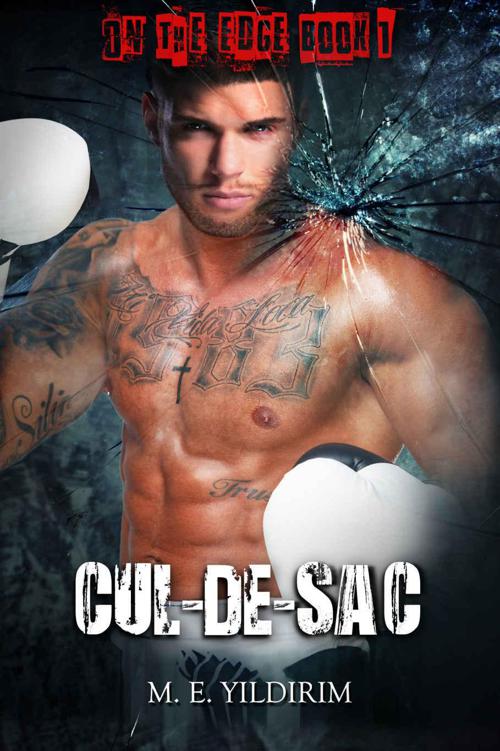 ON THE EDGE SERIES

A street or passage
closed at one end.

A route or course
leading nowhere.

All rights reserved. No part of this book
may be reproduced in any form or by any electronic or mechanical means,
including information storage and retrieval systems, without written permission
from the author, except where permitted by law.

This is a work of fiction. Names,
characters, businesses, places, events and incidents are either the products of
the author’s imagination or used in a fictitious manner. Any resemblance to
actual persons, living or dead, or actual events is purely coincidental.

There is no honest
way to

explain it because
the only people

who really know
where it is are the

ones who have gone
over

Sometimes feelings turn out to be the most
lethal of adversaries.

He is known as Xan
–
an unapologetic
king of an underground fighting arena who doesn't step out of the ring until a
fight is over and won. Nothing matters to him as much as adding another victory
to the tally. But who is Alexander Thorpe, the man behind the fierce stance,
and what is he really fighting for? Brutal childhood and the rough reality of
living on the streets create the perfect background for a relentless and
merciless warrior, but is that really all there is to the man himself? Even
winning can lose its appeal if a man doesn't know what is he really fighting
for... or with whom?

“Perfect” is the word often used when it
comes to Catalina Bennett, “privileged” is another. An entitled upbringing,
private schools and extracurricular activities make for a flawless résumé, but they
don't paint the whole picture of a person. As a photographer, she chooses to
stand behind the camera, which is a perfect way of getting to know the world...
without letting the world know her. Fostered by her grandmother after the loss
of both parents at the tender age of ten, she is expected to bring nothing but
honor to her family's name. Be nothing else than prim and proper, with no space
left for her wants or needs.

But nothing can be denied forever.

Two completely different worlds of two
individuals collide during an accidental event. But does coincidence really
exist or do things happen for a reason? Life is made of seemingly unrelated
moments, fragmented memories and betrayals influencing the reality, no matter
the class a person is from.

Sooner or later, suppressed emotions and
desires demand their due…

“There
were always in me, two women at least, one woman desperate and bewildered, who
felt she was drowning and another who would leap into a scene, as upon a stage,
conceal her true emotions because they were weaknesses, helplessness, despair,
and present to the world only a smile, an eagerness, curiosity, enthusiasm,
interest.”

“It’s
just that sometimes I forget I don’t have to be perfect. I just have to be.”

“In
a fight, your doubt is a target of enemy's attack.”

“It's
strange, but once you learn to fight, you seem to attract enemies...Sooner or
later, those who master the art of combat must end up fighting.”

Vivid crimson was making her stomach lurch.
The metallic scent of it was exactly the same as when she scraped her knee when
she was not careful enough.

But this was worse.

The smell was clogging her nose, her throat,
like an invisible fist trying to choke the life out of her. The pain vibrating
in her parents' bedroom didn't belong to her, yet she was hurting along.

Screams branded by such agony her young
mind couldn't comprehend but would remember from this day on. The well-known
voice of her mother was muffled and distorted in a way that was
incomprehensible to her.

Bad things didn't happen in ten-year-old
Catalina's life. Not truly bad anyway, and she was still hoping that this was
nothing more than a nightmare. One she was going to wake up soon from and find
herself in her daddy's strong arms.

But the next scream froze the blood in her
veins and she knew that this time even her father was hopeless in the face of
monsters that found their way into their home this summer night.

She wasn't even supposed to be here and
wished
–
with the whole
fervor only a child was capable of
–
that she had stayed in her own room, her
own bed instead. But her stomach was acting up and she wanted her mother's
care, her father's affection.

The sudden silence was eerie and even worse
than the wails. Her own heartbeat sounded unnaturally loud in her ears and she
was convinced they were going to hear it and come for her, to make her scream and
beg as well.

The thought alone caused more tears to come
and she wanted to crawl out from under the bed and run blindly ahead. But her
mother's urgent demand that she stay put played in her mind along with her own
promise she would follow it through. It was enough to keep her firmly in her
place.

Bennetts didn't break their promises
–
was what her father
had told her more than once and, above all else, Catalina wanted to make him
proud.

She was torn between whispers of her
heart's needs to join her family and the feeling of duty ingrained in her since
her birth. The latter was about to lose when laughter split the silence,
surrounding her with its inappropriateness, making her choke back a sob that
was threatening to escape her.

The laughter sounded maniacal and filled
with such glee it brought forth a memory of the clown in a circus her parents
had taken her to, not long enough ago for the impression of it to fade away.

She wanted to cover her ears with her small
hands, just to hold the horrible sound at bay. But she couldn't force her
clenched fist to move as if she were nothing but a puppet herself, devoid of
its owner's masterful touch.

The next round of silence was prolonged and
even more ominous, making her whimper like a wounded animal that the sinister
events of this night had turned her into.

Something crashed nearby and Catalina
jumped when a string of profanities erupted around her, but she stayed in her
hideout.

She kept to it long after every sound
subsided along with any sign of life in her no longer safe and happy home.

She was in the exact same position when the
police found her twenty minutes later and the detective who arrived at the
scene carried her from the dark to light again.

Carried her back to life.

It was the wild pitter-patter of her own
heartbeat that brought her to the surface and she woke up in her bed, fourteen
years after the fateful night.

She jolted upright, coming awake in a wave
of pain too big to contain in her soul, in her body, even though it had grown
over the years. The night's blackness and silence were unbroken by nothing but
the wheezing sound that was her own labored breathing.

She reached blindly to the nightstand,
trying to find the switch of the lamp she knew must be standing right there. No
matter how insignificant the knowledge was it felt like a balm poured over her
jagged insecurities and bottomless fear.

She sobbed in relief when a faint glow of
light flooded her bedroom. The artificial illumination was a weak attempt at
dispersing the darkness forever etched into her very being, but it was the only
available weapon at her disposal.

It had been a while since Catalina found
herself in this dream, but each time tore her apart, clawing at the wound that
was never supposed to scab over.

In her sleep, she was locked back in the
body of that helpless child she once was. Reliving the nightmare which split
her life in half and marred her soul while her flesh remained intact.

The death of her parents.

It brought the end of her childhood,
leaving her with just a few memories of the two people closest to her, ripped
from her life and from the world too early. Memories that were fading,
deepening the injustice of that brutal night.

Catalina rose to her feet, letting the cool
silk of the sheet slide down her feverish body and pool on the floor with a
soft rustle, a susurration of sound as audible as a whisper. Barefoot, she
padded to the window, opening it wide to absorb the air and the lulling sound
of the ocean.

But even waves were roaring furiously
tonight, finding a similar rhythm to the wild pounding in her temples. It was
as even nature itself denied to soothe her jaded senses. She breathed deeply
and closed her eyes, but the bloody images refused to abate and let her be.

Wet sounds of blood, pleas and screams
filled her ears once again, forcing her to witness it all over in this lifelong
imprisonment she was in, while those responsible for the carnage had never been
caught and sentenced for their crime. Would it change anything if they had? Not
the outcome, she thought, never the outcome.

She shook her head slightly, as if trying
to wake up from this haze anew and remind herself she was here.

While those she had loved were long time
gone.

A lonely, burning-hot tear slid down her
cheek and she didn't try to stop it, allowing herself to cry. Secure in the
knowledge there was nobody to witness her falling apart at the seams and coming
undone. The perfect mask was cracking just to reveal her true and expressive
face that nobody was allowed to see.

It was easy to lose a sense of reality at
three a.m. when morning was still too far away, she thought. Nightmares were
shrouded in shadows, giving birth to monsters and those were as real to her as
when she was a child.

The difference was, twenty-four-year-old
Catalina knew that no figment of imagination could hold a candle to evil deeds
only a human being was capable of.