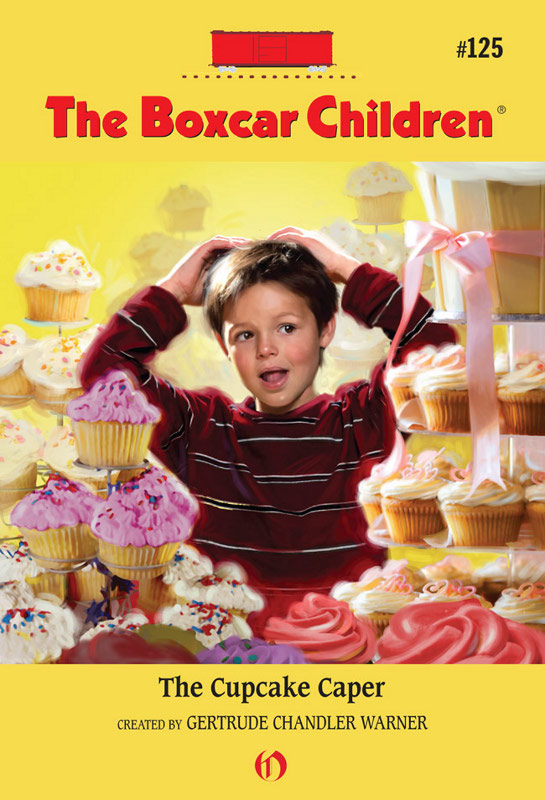 3. A Ghost in Greenfield?

4. The Clue in the Flowers

“Come on, hurry!” six-year-old Benny Alden said, tugging his sister Violet’s hand, practically dragging her down the sidewalk. “Mama Tova just took the cupcakes out of the oven!”

Until a few months ago, the Aldens’ neighbor Maria Tovanoff, who was known to everyone as “Mama Tova,” only made her tasty cupcakes just for family and friends. But the treats were so popular that Mama Tova decided to open a small shop in Greenfield.

She made only 108 cupcakes every day—nine dozen. They all came from the same recipe, but each cupcake was a little different, because Mama Tova added delicious flavors and wonderfully tasty decorations.

When all the cupcakes sold out, the store closed until the next day!

Ten-year-old Violet asked her brother Benny, “How can you tell the cupcakes are ready?”

Henry and Jessie, their older siblings, began to laugh.

“His nose is the eighth wonder of the world. And if Benny smells the cupcakes, we’d better hurry,” Jessie said, breaking into a run. “I hope Mama Tova has some left when we get there.”

Henry’s thick brown hair bounced up and down as he kept pace with his twelve-year-old sister. It wasn’t long before they arrived at the front of Sweets, Mama Tova’s new cupcake bakery.

“Oh no,” Henry said, seeing a long line of people in front of the building. “We’ll never get a cupcake today.”

“Thirty-one, thirty-two,” Benny was busy counting the people in front of them in line. Mama Tova’s rule was “only one cupcake per person.”

“Whew! We got here in time,” Jessie said happily.

Benny jumped up and down, clapping his hands and shouting, “Hip! Hip! Hurray! We’re going to eat a cupcake today.”

Very patiently, the Alden children stood in line waiting for their turn at the cupcake counter.

“I wish we could buy an extra cupcake for Grandfather,” Violet said.

“Maybe he can come with us next time,” Henry replied. “We could bring Watch on a leash and sit outside at the little tables.” 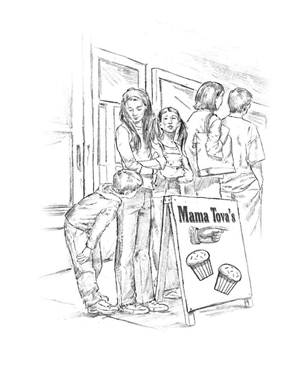 Jessie, Violet, Henry and Benny lived with their grandfather. After their parents died, they ran away and hid in a railroad boxcar in the woods. They heard that their Grandfather Alden was mean. Even though they’d never met him, they were afraid. But when he finally found the children, they discovered he wasn’t mean at all. Now the children lived with him, and their boxcar was a clubhouse in the backyard. They even got to bring along the stray dog they found on their adventures, a wire-haired terrier named Watch.

Jessie and the others took a few steps closer to the boy in front of them. The sisters knew him from school. His name was Pauly and he was in the class between Jessie and Violet. Pauly had straight dark hair and wore braces.

Just before it was his turn at the counter, Pauly turned to Jessie and said, “Can you believe Mama Tova makes me wait in line? I mean I am her nephew, after all.” Pauly complained. “I liked the way it was before she opened the shop. I could have all the cupcakes I wanted, all the time.”

Finally they were almost at the head of the line.

“Next!” called Mrs. Waldman, one of the workers at the shop. It was Pauly’s turn to order. With a sigh, he pointed at a chocolate chip cupcake with purple frosting.

“At least she still gives them to me for free,” Pauly told the Aldens. He went off to eat his cupcake.

“It’s our turn!” Benny announced doing his cheer once again, this time adding, “Hip. Hip. Hurray. A yummy cupcake is on its way!”

“This is the last tray,” Mama Tova announced. She carried three dozen cupcakes to the front. The shop was so busy that Mama Tova needed helpers. Mrs. Waldman served the cupcakes and poured cold milk or lemonade. A girl named Alicia, who was Henry’s age, rang up orders at the cash register.

“Four cupcakes, please,” Henry told Alicia. Each of the Alden children picked out the one they wanted. Benny’s had chocolate cookie dough frosting. Jessie’s was filled with lemon custard and drizzled with lemon icing. Henry’s cupcake had a red cinnamon candy frosting. And Violet picked a purple colored cupcake with blueberry frosting.

“Here you go,” Alicia said. Her curly blonde hair was pulled up under a hat with a huge, floppy, red fabric flower in the middle. Her apron was printed with the same flowers. It was the Sweets uniform. Mrs. Waldman and Mama Tova wore flowered aprons and hats, too.

Each table at Sweets had a flowered tablecloth and a vase of fresh flowers on it. Floral pictures of all different kinds hung on the walls around the room. And there were little purple lilies on the wallpaper. Outside there were even more flowers in a beautiful planter box.

“I just love the decorations in here,” Violet told Jessie as they found a table. “All of the flowers make me feel so happy and bright.” She touched one of the petals on the flower in their table vase. “No matter what season it is outside, it will always be spring at Sweets,” Violet said.

“You say that every time we come here,” Jessie said, laughing.

“I know. I think I should paint a picture of some flowers for my bedroom wall.” Violet glanced around. “Maybe some like that.” She pointed to a painting of a single pink flower. “I don’t even know what kind of flower that is, but it’s so pretty. I could stare at that picture all day.”

Jessie said, “I’ll look it up on the internet when we get home. At least then you’ll know what you’re drawing.”

The children began to eat their cupcakes. They were so delicious, no one talked while they ate. Not even Benny.

When he was done, Benny licked his fingers and sighed. “I’m so sad it’s gone.”

“We can come back again soon,” Henry assured Benny, while Jessie handed him a napkin.

“So, how about same time, next week?” Benny asked his brother, eyes wide. “And then we could come the week after that, too.”

“And maybe even the one after that,” Henry promised.

When all the children were finished, they took their plates and cups to the counter.

“Thanks,” Alicia said, taking the dishes.

“Wow, Alicia,” Jessie said, “Your necklace is so pretty.” Alicia was wearing a gold chain with a large glittery letter
G
hanging from it.

“Thanks,” she said again, lightly touching the letter. “It’s new.”

Just before the Aldens left the shop, Mama Tova came out of the kitchen. She always spent some time in the shop, welcoming her customers. “Hello children,” she greeted as she made her way through the crowd. “How’d you like the cupcakes?”

“I could have eaten all 108 of them by myself,” Benny exclaimed, patting his stomach. “Why are your cupcakes so good?”

Mama Tova chuckled. “It’s because of my secret ingredient. I put it in all the cupcakes I make.”

Mama Tova ruffled Benny’s shiny dark brown hair. “Sorry, Benny. It’s an old family recipe. I can’t tell anyone, ever. But I will tell you this …” She smiled, then said, “I keep the secret ingredient right here at the shop, underneath the flower.”

Jessie, Henry, Violet and Benny looked around the shop at all the different flowers. There were flowers everywhere!

Mama Tova winked. Then they all laughed together.

The bell to the cupcake shop’s door jingled. A tall man entered the store. He wore a suit and his dark hair and mustache were very neatly trimmed.

“Good day, Mama Tova,” Mr. Kandinsky said. “I hope you have had time to think about my offer.” Mr. Kandinsky ran one hand over his tie, smoothing the silk flat against his chest.

Jessie wondered what the man wanted. “No thank you, Mr. Kandinsky,” Mama Tova said. “I cannot possibly sell you my cupcake recipe.”

Benny’s eyes grew wide. “Why do you want her recipe?” he asked Mr. Kandinsky. “It’s a very big secret. She won’t even tell
me
what the mystery ingredient is!”

“I am the owner of BakeMart,” Mr. Kandinsky said. “We are Greenfield’s biggest bread factory.”

“I went there on a school field trip!” Henry exclaimed. “You make all kinds of bread for the grocery stores and restaurants around town.” He added, “It’s a huge factory. All silver and shiny and clean. Impressive.”

“Why, thank you,” Mr. Kandinsky said. “Our business is doing so well that it’s time for BakeMart to grow. We want to make something new.” He looked around the shop. “We think Mama Tova’s cupcakes would be a perfect BakeMart product.”

At that, Mama Tova shook her head. “No, no,” she said. “I like making my cupcakes unique and special. I don’t want my cupcakes in every grocery store and restaurant.”

“You are thinking small,” Mr. Kandinsky said. “From the moment I tasted one of your treats, I knew that you and your cupcakes could be big! Kids everywhere would be eating them fresh out of the package. We could even put your face on the wrapper.”

He took a thick stack of papers out of his jacket pocket and set them on a nearby table. “Here is a contract. You’ll see I am willing to give you a lot of money for the recipe with your secret ingredient.”

“No,” Mama Tova said firmly. She picked up the contract and handed it back to Mr. Kandinsky. “I will not give you my recipe. It’s a family secret. And I won’t sell it for all the money in the world. If you want a cupcake, come by tomorrow and get in line with everyone else.”

And with that, Mama Tova pointed to the shop door. “Good day to you, Mr. Kandinsky,” she said clearly.

Mr. Kandinsky tucked the contract back into his pocket. “You’ll be sorry, Mama Tova,” he said. “BakeMart will get a recipe better than yours. People will buy our cupcakes at every shop in town and your little store here will have to close! You’ll have no more business.”

Mr. Kandinsky turned around and looked straight at Benny. “That sounds like a challenge,” he said. He pressed his lips together for a moment, looking thoughtful. “Thanks to this boy, I have a brilliant idea.”

Benny stepped back. He didn’t mean to give the man any ideas.

“I propose we have a contest!” Mr. Kandinsky announced. Then he called out to the crowded room. “Attention everyone! BakeMart will be having a cupcake bake-off. Bring your best cupcakes and the recipe. The prize is a thousand dollars and BakeMart will make the winning cupcakes.” He smiled so widely that the edges of his mustache rose up a little. “The contest will be held at the BakeMart factory next Saturday at noon. See you all there!”

Mr. Kandinsky left the shop, slamming the door behind him.

“Oh no,” Benny groaned. “A cupcake contest.” He covered his head with his arms. “It’s all my fault.”

“No it’s not, Benny,” Henry told his brother. “You didn’t do anything wrong.”

“But what if he gets a really good cupcake? And then Mama Tova will have to close her store because everyone is eating BakeMart cupcakes!” Benny peeked up at Henry through his arms.

Jessie leaned in and put an arm around Benny. Violet shook her head.

“Don’t worry, Benny,” Jessie said. “Can you imagine anyone on earth with a better cupcake than Mama Tova? You’ve eaten a whole lot of cupcakes, right? Are there any more delicious?”