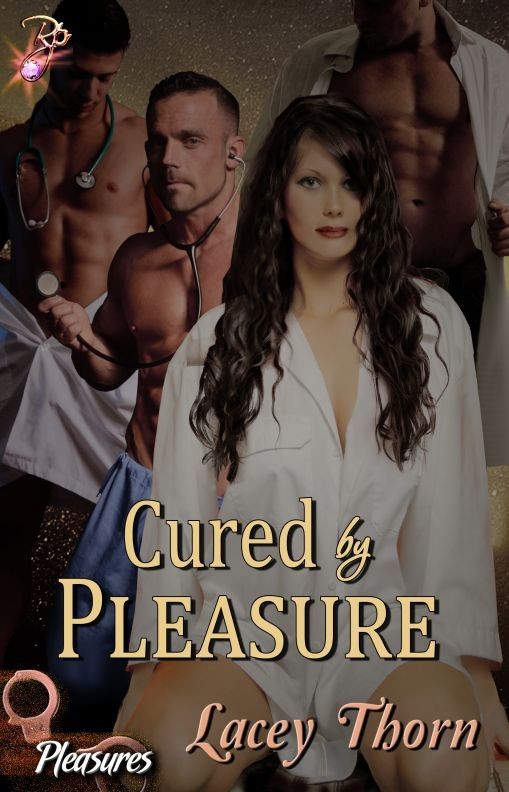 Deja loves her career working as a temp, moving from job to job, covering for those on holiday, sick leave, or just filling vacated positions not yet occupied. Growing up in foster care, she was accustomed to moving around a lot, until she found a home and two sisters, Skye and Melda.

Arriving at another job in a physician’s office, Deja meets the three doctors at the practice—each of them a woman’s greatest fantasy in the flesh. Normally, she’d pick one and make her move, but she wants all three and can’t decide.

Asher, Beck, and Spencer share more than a practice. Sharing a woman, showering her with pleasure is the perfect prescription to cure any ailment. When they convince Deja to join them for one night, no one expects more than a brief fling. But what will they do when none of them wants to walk away?

This one goes out to all the fans of the Pleasures series.
Thanks for all the love and support! You guys rock!

“You can’t be serious!” Deja practically screamed, sending them all into peals of laughter. Hopefully, her neighbors wouldn’t complain about the noise in her apartment, but she’d lived here long enough that most of them were familiar with her weekly get-togethers with her two sisters.

“I’m d-dead s-serious.” Skye was laughing so hard it was difficult to make out her words.

“Oh, my God!” Melda squealed. “I can’t even imagine. He actually jumped on the bar?”

“Jumped on the bar and started gyrating,” Skye stated with a nod. “I think he actually believed he was sexy.”

“How did you get him down?” Deja voiced the question as soon as she caught her breath. She hadn’t laughed this hard in far too long.

“Not my job,” Skye scoffed. “I signaled the bouncers. They helped him down and escorted him to the curb, where they called a cab to take him home.”

Melda was holding her sides as she continued to laugh. “I’d have loved to see that.”

“Trust me. You wouldn’t. The image is seared into my brain. A grown man should never drink to that point.” Skye shook her head in disgust.

Deja wiped the tears from her eyes, as she tried once again to stem her laughter. “It still kills me that the only one of us who doesn’t drink works in a bar.”

“Manages a club,” Skye corrected as she always did.

Melda and Deja glanced at each other and broke into peals of laughter again.

“By the way, I’ve been authorized to hire an assistant,” Skye informed them. “Either of you interested?”

“I have a job,” Deja reminded her. She felt like she was constantly reminding her friend, her sister of that.

“And where are you temping at this time?” Melda asked, always the peacemaker. She’d been playing the role since they were preteens and had ended up in the same foster home.

“Tomorrow is actually my last day as a temp in a doctors’ office. I’ve been there for three weeks now, and let me tell you. I’ve never been so stupid with lust before. Holy moly!”

“One of the doctors?” Melda asked.

“All three of them,” Deja said with a groan. “All of them are tall and built. Powerful and sexy. I wouldn’t mind trying them on for size once tomorrow is over.”

Deja licked her lips. “There’s this rumor at the office that they like to share.” She wiggled her eyebrows and grinned.

Deja shrugged. “Could be just a rumor, but it could be the beginning of my ultimate fantasy come to life.”

Deja nodded, a blissful grin on her face.

“How would that even work?”

“Imagine it this way, Melda,” Deja crooned. “You’ve got one hot guy between your thighs. He’s reclined back on the bed, and you’re on top of him, slowly lowering yourself over the thick stalk of his cock, taking inch-by-inch until he’s fully inside you. Then, before he can move, you’re leaning forward over him while another man moves into position behind you. Your ass is lubed, stretched, and ready for him. There’s a slight pinch as he presses in, the fit so tight with all that cock stuffed in your pussy. And just when you think it can’t get any better, when you’re panting with the need for them to move, to fuck. That’s when your final guy grips your hair with a snug grasp, a slight tug and pull, just enough to focus your attention on him and the big cock he has ready for you to lick and suck. All that masculine attention. All those thick hard inches. All for you. Firm and ready, just for you. You’re the center of their pleasure. You have all the control, even though you’re out numbered. Even though it would seem you would be at their mercy, they’re actually at yours.”

Melda licked her lips and let out a slow breath. “You’ve done this before?”

Deja shook her head. “No. Not yet. But I want to. It’s probably my biggest sexual fantasy.”

“That’s a hell of a fantasy,” Skye murmured.

“What about you guys?” Deja prompted, reaching for the bottle of wine and refilling her and Melda’s glasses. “What do you fantasize about?”

Melda shrugged. “I guess I’ve never really thought about it.”

“Bullshit,” Skye snorted. “I call bullshit on that answer. We all have fantasies.”

“Spill,” Deja ordered. “Hell, I just told you how I want to get it on with three men at the same time. Like anything you want could top that.”

Melda sighed and bit her lip. “I have this fantasy. I’m with my lover, and he’s talking dirty to me, making me wet by telling me all the things he wants to do to me.”

“Nothing wrong with dirty talk,” Deja murmured in agreement.

“When we get to the bedroom, he begins to undress me until I’m naked while he’s still fully clothed.” She peeked at her friends and gulped as they nodded encouragement. “Then he bends me over his lap. I can feel the rasp of his jeans against my skin, the press of his hard thigh against my clit.” She closed her eyes, one hand coming up to touch her neck and rub over the skin there. “He rubs his hand over my ass, caressing it, touching it, relaxing me. Until his hand moves only to strike back down, leaving his print on my ass. He spanks me, his hand making my ass blush, making my pussy weep with need as each fading burn seems to center there. And when he’s satisfied, when the color of my ass suits him, he’ll push me to my knees and stand in front of me, letting me see how hard his cock is. He’ll tell me to unzip him, to take his cock out and suck it. When he’s ready, he’ll pull it free of my mouth, bend me over the bed and fuck me so hard. The room will be filled with the sound of my screaming pleasure as our skin slaps against each other with each fiery plunge of his cock.”

“Holy shit,” Skye groaned. “You guys are making me wish I drank. I need another bottle of water.”

Melda’s eyes popped open, and Deja could tell she was embarrassed at how carried away she’d gotten.

“Damn, Melda,” Deja offered. “I think I’ll add that to my fantasy. I never would have picked you for the type to want to be dominated and spanked.”

Melda shrugged, lifting her filled wine glass and draining it. “You wanted to know my fantasy.”

Skye plopped back down on the couch, lifting her half-full water bottle to her brow and rolling it across. “All this sex talk makes me wish I currently had a lover.”

“So talk, Skye,” Deja encouraged. “If you did have a lover, what would you want him to do?”

She shrugged her shoulders. “I’ve got nothing to top either of you. Who knew my sisters were so pervy.” She grinned.

Deja laughed while Melda snorted. “So, what’s your pervy desire? I know you have one.”

Skye sighed. “After listening to you two, I feel like my sex life has been way too vanilla. That just sucks.”

“These are fantasies,” Deja reminded her.

“Yeah,” Melda agreed. “Trust me. I’ve never had anyone do what I want them to.”

Skye nodded. “Isn’t that the truth? Sometimes the fantasy is so much better in your head. I have this fantasy where I’m cuffed. I’ve always fantasized about two men, but thanks to Deja, I think it will be three from now on. I’m at their mercy. Sometimes I’m blindfolded; sometimes I’m not. Now I’ll be dreaming of them spanking me before they take turns fucking me. They keep trading places, making me come over and over again, while they hold off their own orgasms. Then when I can’t take anymore, when they can’t hold back any longer, they jack off on me, coating my face, chest and stomach with their cum. I’ve got my mouth open, wanting them to give me a taste.”

“Holy shit, that’s hot!” Deja exclaimed, fanning herself. “I’ll be adding that to my fantasy as well.”

Skye laughed. “Here we are talking sex when none of us has a man in our lives at the moment. Obviously, we are gluttons for punishment.”

“Well, Deja could if she dared.”

“I could what?” Deja asked Melda.

“If it were that easy, I wouldn’t be going to bed by myself every night.”

“But tomorrow is your last day at the hot doctors’ office. Give them a signal that you might be interested, you know,” she wiggled her brows, “and see if any of them nibble at your line.”

“Are you sure that’s wise?” Skye asked. “What if it doesn’t work out and you end up temping there again?”

“What if it does work out and you have the most amazing night of your life? What if you get to live the fantasy?” Melda challenged.

“Just play it by ear,” Melda encouraged. “If it feels right, put the idea out there. If it doesn’t, then don’t. You’ll know.”

“I would like to get a better look at them, and by better, I mean a full frontal naked look,” Deja admitted with a groan. “I’ll just be a little flirtier tomorrow and see if any of them seem interested in taking the flirtation to the next step.”

“Are you sure that’s wise?” Skye asked again.

“Sure.” Deja nodded and gulped the rest of her wine. “Just don’t fill that position until I call you tomorrow and let you know if I’m fucked or just fucked.”

“Are you drunk?” Skye asked her.

“Speaking of that,” Skye said with a glance at the clock on the wall. “We’ve got to get going soon. I need to head back to the club for a bit before closing.”

“Can they ever function without you?” Deja asked as Melda stood up.

“Be ready in a sec,” Melda called as she headed down the hall toward the bathroom.

“They hired a new bouncer,” Skye answered Deja. “There’s just something about him I don’t trust.”

“I will,” Skye agreed. “I just want to keep a close eye on him, until I figure out why he has me edgy.”

Deja nodded, glancing down the hall Melda had disappeared down before voicing her next question.