Read Curse of the Nandi (Society for Paranormals Book 5) Online

Curse of the Nandi (Society for Paranormals Book 5) 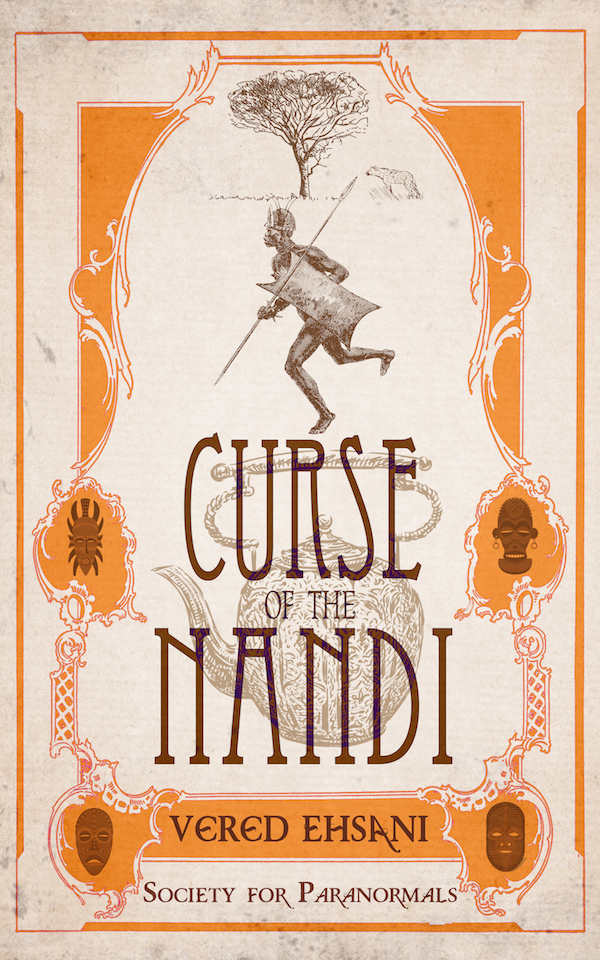 The House of Stone

CURSE OF THE NANDI

from Africa… with a Bite

Get 3 Books for Free:

Ghosts of Tsavo
~ the first book in the “Society for Paranormals” series, with over 200 rave reviews

That Night in Lagos
~ the prequel

For more information on how to get your 3 free books, go to
http://veredehsani.co.za/free-books/

Dear reader, I thought it prudent to provide a synopsis of my past adventures, to refresh the mind, invigorate the spirit and prepare you for the disaster that awaits. If you are already conversant in the comings and goings of the past few months in Nairobi, then by all means skip along to the next chapter.

As some of you may (or may not) recall, I arrived in East Africa with my aunt, uncle and cousins, not to mention a dead husband in tow. Life’s tragedy had bestowed on me resilience to change and challenge, so I approached the dramatic move with a certain curiosity and a conviction that I would no longer be employed in paranormal investigations. As it turned out, the African continent was riddled with all sorts of wildlife, of which the most interesting specimens would never be found mounted on a hunter’s wall.

Soon after setting eyes on the town which was little more than a construction camp, I quickly became embroiled in the matter of the Ghost Lions. These fascinating creatures were in fact twin shape-shifters with a fondness for goat meat. It was during that fiasco when I was introduced to Kam, the God of Lightning and all things troublesome, and my future husband Mr. Timmons, who at first meeting struck me as an irksome and dangerous man, an opinion I still at times maintain.

I then had to contend with a rampaging automaton that was possessed by the demented and vindictive Mrs. Cricket, the deceased wife of the bumbling but well-meaning inventor Dr. Cricket. Possession seemed to be the theme of the day, for my uncouth horse Nelly was likewise battling with a serpent spirit which she eventually devoured and in the process developed a peculiar obsession with flowers and flying.

Meanwhile, Dr. Cricket was possessed with the notion that I might actually be induced to marry him, and my cousin Lilly became infatuated with the dashing Mr. Tiberius Elkhart, a Popobawa whose singular crime was to abduct me in a failed attempt to deport me back to England. After a delightful skirmish in a cave with the evil Mrs. Cricket, we suffered through the ordeal of planning Lilly’s wedding.

No sooner had we sorted that mess out, my dead brother Drew arrived. As it turned out, he wasn’t as dead as we’d all presumed, and he revealed himself to be not only a werewolf, but the beloved of my best friend Priscilla White.

As if that wasn’t sufficiently unsettling, my nemesis also decided to pay me a visit. I’m not the vengeful sort, so I don’t quite appreciate the motivations of those who are. Koki, a she-demon from West Africa, was one of those vindictive personalities and had stalked me ever since I sliced off one of her legs. In my defense, it was either her leg or my head that was being removed, and she did have five other legs while I had only one head. Needless to say, there was a grand battle on the shores of Lake Naivasha that was proceeding rather poorly until Koki’s spider husband, Anansi the Trickster God, put a stop to it while reminding me of a promise I had never intended to make.

At some point, Mr. Timmons persuaded me to marry him. Before we could carry through with that madness, Lilly and I were kidnapped by a zeppelin-flying dwarf who shall be referred to as Nameless. The experience wasn’t as terrible as it sounds. Far more offsetting were the truths that I discovered concerning my beloved mentor, Prof. Runal, the Director of the Society for Paranormals. It appeared the wily old werewolf hadn’t been at all forthright about his involvement in the deaths of my parents and my first husband, Gideon.

While the Society was officially governed by three mandates that protect both normal and paranormal communities, there was a little-known fourth mandate that provided justification for murder. And between fending off Nameless and discovering inconvenient truths about my former employer, I yet again ran afoul of Koki and lost my left hand in the process. Dr. Ribeiro, a zebra riding Goan with a charming disposition, managed to prevent my premature demise while Dr. Cricket invented for me a rather clever contraption to replace my lost limb.

Along the journey, I discovered my mother was a witch (literally), and that in addition to being a witch myself, I was also part werewolf, which explained my odd, yellow eyes and my impressive night vision, not to mention my highly sensitive olfactory nerves and my wolf energy. More critical than that was the realization that for all that I had lost in my life, I had gained a circle of friends and family whose eccentricities and powers were only matched by their devotion.

And now, let us begin.

The first scream ended abruptly, which was fortunate for all but the source of the scream, as no one likes to be awoken in such a manner. It is safe to assume the brevity of the noise created was associated with the rapidity of the victim’s demise. Perhaps the screams would have persisted longer if the victim had caught more than a fleeting glimpse of the beast, or if the beast’s appetite had been less than voracious.

Its needs somewhat appeased by the delicacy, the hunter lingered on the outskirts of the settlement, waiting, its hunched form clinging to the outstretched branch of a flame tree.

It didn’t have long to wait. A woman and her child hurried along the darkening path, their backs bowed under loads of wood. They glanced about in every direction but upward, as if at some level they intuited the risk of being out among the trees past sunset. Yet despite their care, they failed to recognize where the true danger lay.

A moon, heavy with light, hovered close by, a watchful and aloof spectator with no interest in the scene beyond a dispassionate curiosity.

Something howled, and the two humans and the beast startled at the sound. It was a foreign cry in this land, the call of another hunter who didn’t belong on these shores.

Dismissing the distraction, the creature crouched in readiness, unconcerned by the other, distant predator. An unearthly silence pervaded the air, for no other being would dare enter the space in which it stalked its prey. Less able to disregard the howl,
the woman berated the child for its slowness as they approached the occupied tree.

Leaning forward, the beast readied its arms, long and muscular, each ending in three long claws.

The woman continued to shuffle along, even when her head was removed with two fierce strokes. Only after she passed from under the branch did her legs give way. Branches fell off her back with a great clatter that could barely disguise the child’s wail.

Satiated, the hunter emitted a sound reminiscent of a tortured demon, leaped to another tree, scurried down and raced off into the darkness.

Street Game by Christine Feehan
Wednesdays in the Tower by Jessica Day George
By Some Miracle I Made It Out of There: A Memoir by Tom Sizemore
The Clear-Out by Deborah Ellis
Song of the Sea Spirit: An epic fantasy novel (The Mindstream Chronicles) by May, K.C.
Written in the Blood by Stephen Lloyd Jones
The Runaway by Katie Flynn
WereWoman by Piers Anthony
Captive of the Hitman: A Bad Boy Mafia Romance Novel by Alexis Abbott, Alex Abbott
Journey to the End of the Night by LOUIS-FERDINAND CÉLINE