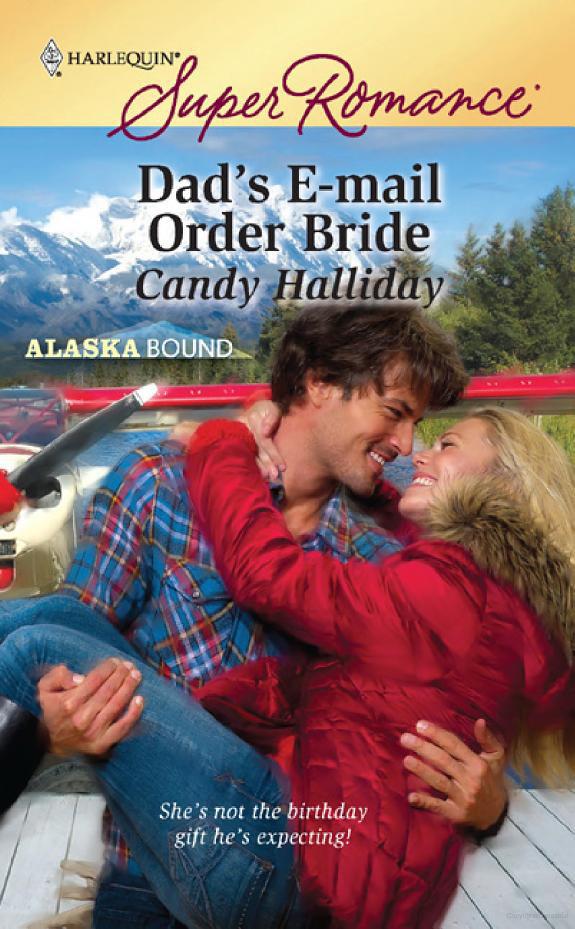 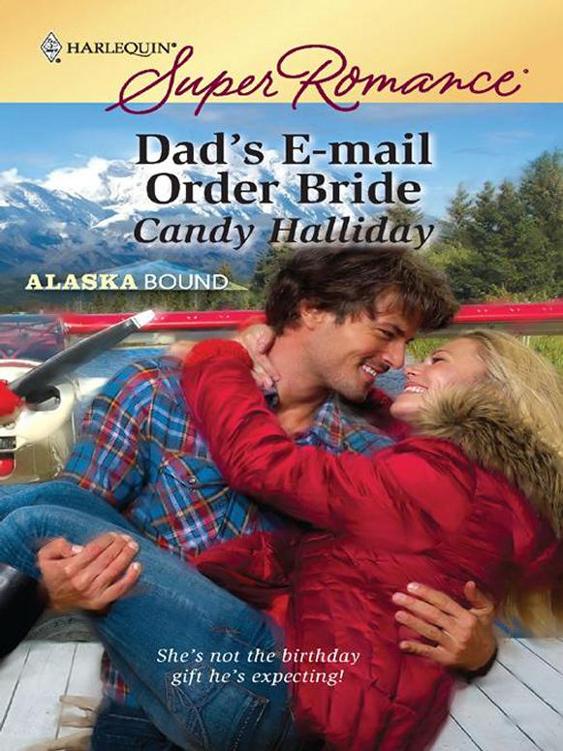 “Do you want to teach your daughter a lesson?”
Courtney cocked her head in Graham’s direction. “Because you know the best way to do that would be to beat Rachel at her own game.”

“I’m not sure what you mean,” Graham admitted.

“I think we’ve both figured out the reason I’m here is because Rachel thought if we hit it off, you’d be willing to move back to New York City.”

He snorted. “Not likely to happen.”

“So what if we let Rachel think her idea worked when she gets home? Except instead of you going to New York, we’ll tell her I’ve decided to move to Alaska?”

He threw his head back and laughed. “To quote Rachel’s favorite expression, she would totally freak out.”

“Exactly,” Courtney said with a smile.

Like many authors, I also have a day job. One of the things I enjoy about being a dental hygienist is meeting interesting people.

Recently one of my patients married a man she’d met on an online dating site. The venue she used to meet her Mr. Right wasn’t what intrigued me. What intrigued me was that this man lived in a remote part of Alaska.

I thought of the drastic changes she and her teenage daughter would face living in such a secluded place, especially from her daughter’s point of view. Can you imagine telling a teenager she would be living with no shopping malls, no movie theaters, no fast-food and—
gasp
—no cell phone service?

That’s when my inspiration for
Dad’s E-mail Order Bride
was born. I decided to tell my story from a different angle. Fifteen-year-old Rachel Morrison isn’t going to Alaska—she’s there with her stubborn widower dad who has no interest in moving back to New York City. Rachel’s goal: pretend to be her dad on an online dating site and find him a wife from New York so he’ll have a reason to return to civilization.

Getting to know my characters in this book was great fun for me. I hope you enjoy reading it as much as I enjoyed writing it.

ABOUT THE AUTHOR
Multipublished romance author Candy Halliday lives in the Piedmont of North Carolina with her husband, a spastic schnauzer named Millie and an impossible attack cat named Flash. Candy’s daughter and son-in-law and her two teenage grandchildren live nearby. Candy loves to hear from readers. Drop her a line at www.candyhalliday.com.
Books by Candy Halliday
HARLEQUIN SUPERROMANCE
1575—A RANCH CALLED HOME
This book is dedicated to the greatest group of dads I know: Tracy Cottingham, Eddie Clark, Chris Patrick, Steve Poe, Matt Miller, John Mathews, Mark Thomas, Mike Simmons and Jon Scott.
ACKNOWLEDGMENTS
Thanks always to my super agent Jenny Bent, and a huge congratulations to Jenny for launching her own literary agency: The Bent Agency.
Immense thanks to my amazing editor, Wanda Ottewell, who has incredible insight and demands the best from me.
All of my love forever to my wonderful family: Blue, Shelli, Tracy, Quint and Caroline.
CONTENTS
CHAPTER ONE
CHAPTER TWO
CHAPTER THREE
CHAPTER FOUR
CHAPTER FIVE
CHAPTER SIX
CHAPTER SEVEN
CHAPTER EIGHT
CHAPTER NINE
CHAPTER TEN
CHAPTER ELEVEN
CHAPTER TWELVE
CHAPTER THIRTEEN
CHAPTER FOURTEEN
CHAPTER FIFTEEN
CHAPTER SIXTEEN
CHAPTER SEVENTEEN
CHAPTER EIGHTEEN
CHAPTER NINETEEN
CHAPTER TWENTY
CHAPTER TWENTY-ONE
CHAPTER TWENTY-TWO
CHAPTER TWENTY-THREE
CHAPTER ONE
G
RAHAM
M
ORRISON
heard the noisy motor long before the floatplane came into view. He stuck his ax into the top of the log he’d been splitting with a loud
thwack,
removed his gloves and watched the plane circle the cove and make a graceful landing on the water.
Like other homes and establishments in Port Protection, Alaska, the small community was accessible only by boat, or by floatplane. Most people would have found the extreme isolation on the northern tip of Prince of Wales Island unbearable. But never once had Graham regretted coming to Alaska to renovate the fishing lodge his grandfather had left him.

Port Protection was a safe haven.

For him—and for the daughter he was raising alone.

Graham shoved his gloves into the back pocket of his jeans and started down the path to the long dock stretching out below Trail’s End Lodge. His place was always the last stop for the bush pilot on Friday, but today Graham hoped Gil Hargraves wouldn’t try to amuse him with any of his escapades.

Women were always Gil’s favorite subject. And Gil never missed an opportunity to remind Graham what he was missing staying secluded in Port Protection where the population was less than one hundred people and where the only single woman in town was in her late seventies and had outlived three husbands.

On Gil’s last trip he’d supposedly been gearing up for an amorous weekend with twin sisters from Anchorage. Other men might enjoy hearing Gil brag about his conquests, but Graham didn’t.

He needed to grow up.

The floatplane came to a stop alongside the dock. Gil switched off the loud engine, opened the door and swung himself easily out of the plane. Even Graham could understand why he didn’t have a problem with the ladies. Gil was better looking than most guys, kept in shape, and Graham had heard his fifteen-year-old daughter refer to Gil more than once as
wickedly hot.

His daughter referring to any male as
hot
—wickedly or otherwise—always made Graham cringe. Graham prayed Rachel would stay away from guys like Gil who liked to kiss and tell before moving on to the next woman.

“You’re looking good, Graham,” Gil said as he bent down to secure the plane’s tie lead to the dock. He straightened with a menacing smirk on his face. “In fact, you don’t look a day over forty.”

“Don’t push it, Gil,” Graham warned. “I won’t turn forty until tomorrow. I’m holding on to thirty-nine as long as I can.”

“Well, I brought you one hell of a birthday present,” Gil said, “that’s for sure.”

“Yeah?” Graham assumed Gil was referring to the log splitter he’d finally decided to buy rather than continue splitting wood the hard way. This birthday served to remind him he wasn’t getting any younger. So he’d circled the splitter in the outdoorsman catalog, and he’d left his credit card in plain view for his daughter’s benefit.

Rachel had obviously taken the hint and made the purchase on the Internet the way they did their big-item shopping. Her last words before she left for school were to remind him to stay near the lodge so he wouldn’t miss Gil when the plane landed with his birthday present.

Gil laughed. “No, but you probably will.”

Graham was puzzled by his answer. And he was even more confused when Gil walked back to the plane and opened the passenger side door. There were no fishing parties scheduled for the weekend—a promise he’d made to Rachel—even though May was a peak month for salmon.

Whether Graham liked it or not, his daughter was throwing him a big party on Saturday. And Rachel had been so proud of herself for making the arrangements he hadn’t had the heart to disappoint her.

A tall blonde stepped from the plane.

Legs that went on forever.

Gil winked at Graham when he reached for her hand. And Graham went from confused to downright stunned. She could have been a model on the cover of a fashion magazine. And now she was walking in his direction.

Graham didn’t say a word when she came to a stop in front of him. Her high heels brought them almost nose-to-nose, and her eyes were as blue as the fur-trimmed parka she was wearing.

She leaned forward and kissed him gently on the lips.

Graham was tempted to kiss her again.

Until she said, “Happy. Birthday. Graham.”

Her words were so stilted and robotic Graham took a quick step backward. And when he looked past her, Gil was standing at the rear of the plane grinning from ear to ear.

Just last month Gil had told him about a Russian hooker he’d met in Nome who could barely speak English. And he’d bragged he could fix Graham up with her on a moment’s notice.

So the joke was on him.

Gil had paid the hooker to kiss him for his birthday.

Graham was prepared to be a good sport and laugh the whole thing off—until Gil unloaded two matching pink suitcases and placed them on the dock.

“Hey!” Graham called out in a panic and hurried in Gil’s direction.

It would be just like Gil to take the joke too far—to pay the blonde to give him more than just a birthday kiss. But damn! Had Gil forgotten there was an impressionable teenage daughter to consider?

Graham made it to the plane just as Gil was reaching out to close the cargo bay door. He grabbed Gil by the arm to keep that from happening.

“Okay, Gil, the joke’s over,” Graham told him. “You seem to have forgotten I have a daughter. So pick up the luggage, get your friend back into the plane and—”

“Whoa!” Gil said, jerking his arm away. “She isn’t any friend of mine. I’ve never seen her before.”

Gil looked past him for a second. “Your guest doesn’t seem to think this is funny, either.”

Graham glanced over his shoulder.

The frown on her face sent a shiver up his spine.

Gil shook his head. “No way. I have a hot date with a redhead in Ketchikan tonight and I’m already behind schedule. The blonde is your problem. I’ll be back to pick her up on Monday when I drop off your guests for next week.”

Graham took a threatening step forward. “Don’t be a wiseass, Gil. I have no idea who this woman is. And she certainly can’t stay here all weekend.”

Gil peered around him again. “Don’t you be a
dumb
ass, Graham. Whoever she is, she’s a knockout, man. And you’ve got a big lodge with a bunch of empty rooms for her to choose from. If you don’t know her, get to know her. That’s what I’d do.”

“I’m not you,” Graham said between clenched teeth.

“Your loss,” Gil said and bent down to unfasten the tie lead.

“I mean it, Gil,” Graham said. “Don’t you leave this dock until I get this straightened out.”

Graham turned and walked in the blonde’s direction. He was midway to where she stood when the sound of the noisy engine coming back to life jerked Graham’s head around.

Gil’s reply was a final salute before he sped across the cove. Two seconds later the only chance Graham had of his birthday present leaving before Monday lifted into the air. Two seconds more and the plane flew around the cove and disappeared out of sight.

Graham looked over his shoulder again. Now she had her hands on her hips. And she didn’t look one bit happy.

That made two of them.

The Captain's Dog by Roland Smith
The Arrivals by Melissa Marr
Bargaining for Baby by Robyn Grady
The Years of Rice and Salt by Kim Stanley Robinson
Point of No Return by Rita Henuber
Kissing the Beehive by Jonathan Carroll
October's Ghost by Ryne Douglas Pearson
Cypress Point by Diane Chamberlain
Trapped Under Ice by Schiller, M. J.
Dirty Love by Lacey Savage