Read Dance, The (The Restoration Series Book #1): A Novel Online

Dance, The (The Restoration Series Book #1): A Novel 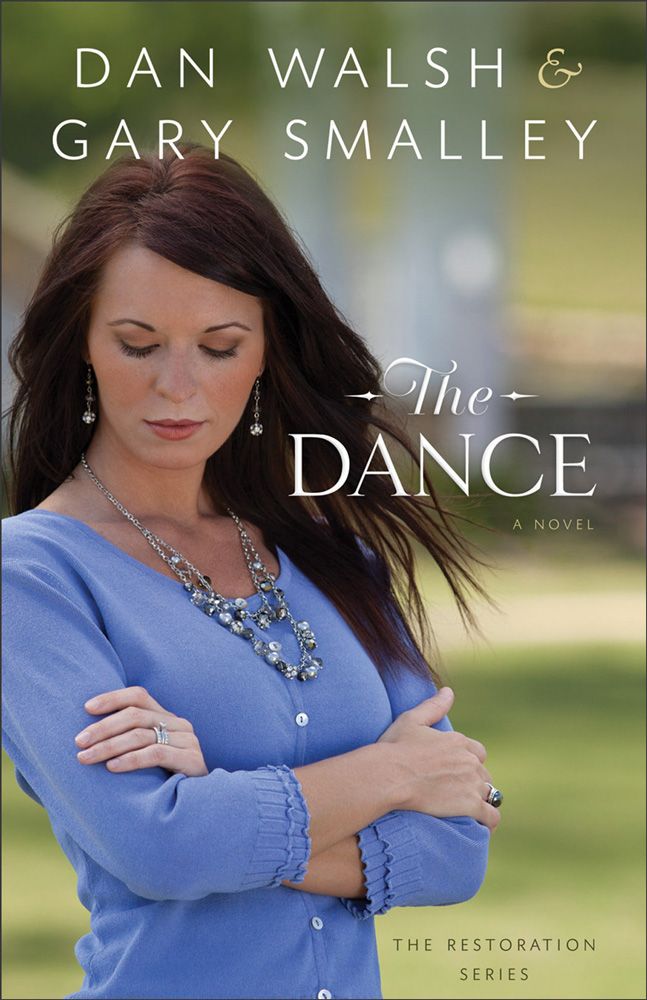 a division of Baker Publishing Group

The internet addresses, email addresses, and phone numbers in this book are accurate at the time of publication. They are provided as a resource. Baker Publishing Group does not endorse them or vouch for their content or permanence.

To Gary, whose first book rescued my marriage thirty years ago.

To all of my ten grandchildren, because each one is growing closer to God.

My dear brothers and sisters, take note of this: Everyone should be quick to listen, slow to speak and slow to become angry, because human anger does not produce the righteousness that God desires.

Many waters cannot quench love; rivers cannot sweep it away.

Dan’s Interview with Gary about
The Dance

M
arilyn Anderson drove her car into the charming downtown section of River Oaks, Florida, holding her cell phone three inches out from her face. She hated talking on the phone with Jim when he was upset. She’d been dreading this day for months. And this call. Things like this should be said in person; she knew that. But she also knew that would never happen. She’d never muster up the nerve.

Sitting there at a stoplight, she looked at the phone. Jim was inside it. Him and his angry little voice.

“Please, Marilyn,” Jim said. “I’m just getting back from a horrible lunch. Another tenant is canceling their lease. You have no idea the pressure I’m under right now. Can’t this wait till later?”

Marilyn sighed. She wanted to yell back her reply but didn’t dare. “No, it can’t wait,” she said.

Love you, bye? Did he really just say that?

The light turned green. Marilyn gently applied pressure to the gas pedal.
I have to do this. There’s no other way
. Tears
flowed down her face, but she refused to turn the car around. To silence the guilt that had been hammering her all day, she blurted out, “God, I know you understand me. Even if no one else does, I know you do.”

Jim Anderson’s workday ended like so many others, right at 5:00 p.m. His daily routine had unfolded according to his precise intentions. He locked the doors of his office suite for the day and tried to suppress dark thoughts about his cash flow situation.

It had slowed to a trickle from where it was a few years ago. His company—Anderson Development, Inc.—was located on the outskirts of the quaint downtown area of River Oaks, Florida, an idyllic planned community built along the St. Johns River, not far from Sanford. You wouldn’t find this admission in any real estate brochure, but River Oaks had clearly been modeled after similar planned communities like Celebration near Disney World or the lovely town of Seaside in the Florida panhandle.

A few years after moving to River Oaks in the midnineties, Jim had started his own commercial real estate company. Business had boomed, and for years the money poured in. Right up until the bottom fell out of the market. Several businesses that leased properties from Jim had gone belly-up, and now another one was about to bite the dust. It was all he could do now to keep his nose above water.

For Jim, the name of the game was looking prosperous and successful while he scrambled to find new tenants to close the gaps. But no one wanted to get on board a sinking ship.

He drove his Audi A8 along River Oaks’s tree-lined streets. It was hard not to look the part living in a place like this. Marilyn had fallen in love with it from the start. Every home was an
architectural masterpiece. Most were built in old Southern tradition or, like the Andersons’ house, with a decidedly Victorian flair. Large two-story homes with wraparound front porches, big windows, lots of ornamental trim. And, of course, every lot was professionally landscaped. Even the smallest homes were priced out of the reach of all but the upper middle class.

Jim arrived at Elderberry Lane, then turned down the one-lane service road running behind his house. All the homes had freestanding garages in back. Who wanted to see garage doors or grimy trash cans at the end of driveways? From the front, the homes looked pristine, immaculate, the epitome of neighborhood bliss.

After Jim clicked a button inside his car, the first of three garage doors lifted. Jim pulled his Audi into its spot and was instantly annoyed at the sight of his son Doug’s little red Mazda.
Look at it. It’s filthy . . . still filthy
. He’d been after his son to get that thing washed for a week. He grabbed his briefcase and suit jacket and shut the car door.

What had Marilyn fixed for dinner?

He walked through the utility room, surprised to find a laundry basket full of his clothes sitting on a counter beside the washer. Stopping to inspect, he lifted one of the shirts. By the wrinkles, he could tell it had been sitting there for hours. What was Marilyn thinking, leaving his clothes in the basket like that?

As he left the utility room and headed for the main house, he noticed his breakfast dishes still sitting on the glass table on the veranda by the pool. It was mid-July, but that morning had been unseasonably cool, so he’d asked Marilyn to set breakfast out there. He’d invited her to join him, of course, but she was busy doing . . . something.

Why were the dishes still there? She knew better.

He opened the glass patio door off the great room. “Marilyn?” he yelled. No answer. He noticed something else. Or, the absence of something. There were no dinner smells, no activity in the kitchen at all. As he walked inside, it was obvious dinner had not even been started.
What the heck?

“Marilyn,” he yelled again, loud enough to be heard in the center rooms of the house. She must be in one of the bedrooms. He walked through the tiled hallways toward their master bedroom suite, the only bedroom downstairs. “Marilyn?”

The bed was made, sort of. The fancy pillows were on the floor, not stylishly arranged as they should be. He walked into the bathroom suite. She wasn’t there. He hurried out to the stairway, called her name again as he ascended. In all three upstairs bedrooms, there was no sign of her. No indication that anyone had even been up here today. That wasn’t unusual.

Of their three children, only Doug lived at home, and he stayed in the little apartment above the garage. Their daughter, Michele, lived in her dorm at college. And Tom, their oldest, was married with two children. He and Jean lived in Lake Mary, about twenty-five minutes away.

Jim came down the stairs, certain now something was wrong. Pulling out his phone, he checked to see if he had any messages. He did not. The only call from her was that quick chat right after lunch, when he couldn’t talk. But that was hours ago. He called Marilyn’s number, waited for her to pick up. It rang a few times, then he waited through her voice mail message. “Hey, where are you? I’m home, and you’re not here. Dinner’s not even started. What’s going on? Call me as soon as you hear this.”

Jim remembered the message center on a short wall beside
the refrigerator. He looked; something was written on the yellow pad. He hurried over, but it was only a note from Doug.

Jason picked me up around 3. Eating dinner at his place. Be home by 9.

Jason, Jim thought. He couldn’t stand that kid. Jason was into hip-hop, wore big baggy pants he had to hold up with one hand, his boxer shorts always sticking out for the world to see. Jim reread Doug’s note. So, Doug left the house at three; that meant Marilyn hadn’t been home then or he’d have told her instead of writing the note. Where was she? Maybe something had happened with one of Tom’s kids, and she’d had to leave in a hurry. He quickly dialed Tom’s home phone number.

“Hi, Jean. Is Marilyn there? She wasn’t home when I got here. Are you okay, are the kids okay?”

“Everyone here is fine.”

“I can’t figure out where she is.”

“She’s probably fine. Maybe she just stepped out to get something she needed for dinner.”

“Dinner’s not even started.”

“Hmm. I don’t know what to say. I’ll ask Tom when he gets home. Call us when you find out so we don’t worry.”

He hung up and called Michele. By this time, she’d be done with her classes for the day. She was a senior doing a summer semester at Southeastern University, a small college in Lakeland. Of course, he didn’t get her. He never got Michele when
he called, always her voice mail. “Hey, Michele, it’s Dad. I’m looking for Mom. Got home from work and there’s no sign of her here at the house. I’m getting worried something might’ve happened to her. It’s not like her to leave without telling me where she’s going. Give me a call as soon as you get this.”

After hanging up, he made another pass through the house, this time looking for any signs of foul play. As he cleared each room, his heart beat faster. Something must have happened. Had she been abducted? Had there been a home invasion? It seemed unlikely; crime was almost unheard of in River Oaks. Other than the house being a little messier than usual, there were no signs of a break-in. None of the high-ticket items appeared to be missing.

But where was she?

The garage. It just dawned on him, he hadn’t seen her car there when he’d pulled in. He ran out to the garage to confirm it.

Had she been in an accident? He hurried back to the message board by the fridge, where they kept a list of important numbers. He was just about to call the local emergency room when his cell phone rang. It was Michele. “Thanks for calling,” he said. “I’m getting a little frantic here. Your mom is missing. I think something may have happened to—”

Jim’s heart sank. He collapsed on a bar stool and braced himself for bad news. “Tell me what?”