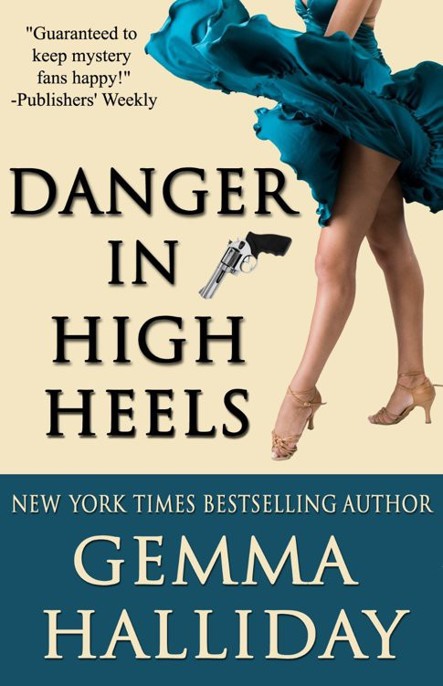 What the critics are saying about

"A saucy combination of romance and suspense that is simply irresistible."

"Maddie Springer is like the west coast version of Janet Evanovich's Stephanie plum - only more stylish!"

What the readers are saying about

"The high heels books are one part Fashion Police's Joan Rivers, one part Janet Evanovich's Stephanie Plum, and one part Agatha Christie cozy - which all add up to pure fun."

"Laugh out loud fun! Lucy and Ethel have met their match with Maddie Springer and her sidekick Dana."

"If you like
Dancing with the Stars
, you're going to love this book! It's the funniest take on the TV show I've ever seen!"

This ebook is licensed for your personal enjoyment only. This ebook may not be re-sold or given away to other people. If you would like to share this book with another person, please purchase an additional copy for each person you share it with. If you're reading this book and did not purchase it, or it was not purchased for your use only, then you should return to your online retailer and purchase your own copy. Thank you for respecting the author's work.

The sun was shining, the birds were chirping, the traffic was even flowing on the 405, and I was out of the house enjoying an afternoon cocktail on the patio of a trendy Melrose restaurant with an old friend. Life was good.

"So, where was I?" I asked, momentarily distracted by the overwhelming goodness of my life. (And possibly the effects of the cocktail.)

"I haven't the foggiest," my companion remarked dryly, his British accent lilting across the table to me.

"Right. Livvie," I said, remembering my train of thought. "I swear it was just the cutest thing I have ever seen in my entire life. She and Max were outside, and we'd propped them up with their Boppy pillows, and Max had his binkie on his belly, and Livvie just reached out and got qhold of it with her chubby little fists and..." I paused, stealing a glance across the table at my companion. He was smirking at me, raising one eyebrow in an is-this-chick-for-real? expression.

The smirk turned into a full-fledged grin as he sipped his martini. "Maybe just a smidge."

Recently I'd stumbled across a very odd phenomenon. Not everyone in the world thought my twin babies were as fascinating as I did. Crazy, right? But I'd found that when I was telling the story of how my three-month-old daughter, Olivia, or Livvie as we'd taken to calling her, was spitting up on her car seat or how my son, Max, exactly three minutes younger than his sister, was prone to colic, my fashionably single friends all seemed to yawn, roll their eyes, or smirk (as was the current case) and suddenly remember some very important appointment they were late for. Go figure.

I sighed, reaching for my pomegranate margarita. "Point taken," I mumbled. "Honestly, I swear I can carry on an adult conversation, too."

He waved me off. "Not at all, love. Your Boppy, binkie, boopie-whatever little munchkins sound delightful."

"They are. You know, you really should come see them sometime."

"Uh-huh," he said. "I will. As soon as they stop drooling and leaking from their back ends."

My turn to smirk. Felix Dunn was not what I'd call a baby-person. I'm sure he didn't actually hate them. And he had probably even been one once. But I had a hard time picturing him in the vicinity of one now.

Felix was the managing editor of the
L.A. Informer
, Hollywood's most notorious tabloid, making him much more comfortable stalking an A-lister down the Sunset Strip than holding an infant that may "leak" at any moment. I'd met Felix years ago when we'd both ended up in Las Vegas tracking down a group of Prada smuggling drag queens. Clearly that had been in my pre-husband-and-kids lifetime. But Felix's life was, as far as I could tell, pretty much the same as it had been back then.

Felix was not overly tall, but not what you'd call short either. He had a slim build, sandy blond hair, and blue eyes that always seemed to be twinkling beneath his sandy brows with some sort of secret knowledge. He was dressed today in his usual uniform of a button down shirt and khaki pants, though I noticed that since he'd been promoted from reporter to editor, he'd traded in his sneakers for a respectable pair of oxfords. John Varvatos, if I wasn't mistaken. A splurge I was surprised at, considering Felix's usual tendency toward thriftiness.

"Okay, Dunn," I conceded, "I've got a moratorium on the baby talk. So what was it you wanted to discuss this afternoon?" I asked, switching gears.

Two days ago, Felix had called me out of the blue and asked if I could meet him for lunch. Not that I didn't appreciate the afternoon out, but, as I mentioned, Felix wasn't known for his extravagant generosity in the cash department. If he'd agreed to pay for lunch, I knew he had an agenda.

"Right." He leaned his elbows on the table, studiously avoiding getting any marinara sauce from his pasta dish on his sleeves. "I need your help with a story we're working on. Specifically, I was hoping you could give me some background information on someone."

I raised an eyebrow his way. "Sounds intriguing."

I nodded, the name jogging an old memory. "Sure. She and I went to design school together. She was my roommate. But that was forever ago." And, at the risk of dating myself unnecessarily, I wasn't going to admit to Felix just how long ago "forever" was. In school Lana'd had a flair for the dramatic, and after graduation she'd taken her talents to Hollywood, designing costumes. I, on the other hand, had gone the footwear route and started my own line of high heeled shoes. "Last I heard Lana had a boutique on Melrose and was wardrobe assistant at some TV network," I told Felix.

He nodded. "Actually, she's the head of wardrobe for UBN now."

"Wow. Good for her," I said, honestly meaning it as I sipped my drink again.

"Anyway," he continued. "One of my reporters recently got a tip that some wardrobe items have gone missing from one of the network's shows."

"Exciting. Your paper must be thrilled."

"Ah. So, you want to know if Lana can be trusted."

Felix nodded. "Exactly. Is this a case of an overworked wardrobe woman being careless or an actual crime?"

"Okay, tell me about the theft."

"Well," Felix said, leaning back in his seat again. "The source claims that three separate times now costume items have gone missing. Last, it was the lead's outfit, and the whole production had to shut down. Cost them a day's worth of shooting time, and Lana was in some very hot water with the execs. Time is money."

"So you think maybe she's just claiming theft to cover her ass?" I asked, reading between Felix's cynical lines.

Felix shrugged noncommittally. "What do you think?"

I leaned back in my chair, letting the warm sun wash over my shoulders. "That's a tough one. Like I said, it's been years since I've seen her. Was she a little dramatic? Sure. But this is Hollywood. That's kind of a given."

Felix pursed his lips together, clearly not hearing the answer he was looking for.

"But," I added, "she was good at what she did. Fashion was her life. I couldn't see her simply misplacing something that important. If it were up to me, I'd be inclined to believe your source."

Felix nodded. "Perfect." I could see juicy headlines dancing in his eyes.

I grinned at him. "Since when are you tabloid boys so concerned with the truth, anyway? Don't I seem to remember a time when you pasted my head on the body of Pamela Anderson to pump up one of your stories?"

Felix narrowed his eyes at me. "You're never going to let me live that one down are you?"

I shook my head, feeling my blonde hair whip at my cheeks. "Nope. Not in this lifetime."

"Truth is, those were different times. B.T. Before Twitter," he clarified. "Now, we print something that isn't on the up and up, and everyone and their mother is online calling us liars, propagandists, you name it. Subscribers are a lot more savvy." He paused. "Or possibly just cranky. Either way, we have to be a bit more careful about checking our facts if we don't want to lose followers."

"Well, hurray for Twitter. I'll be expecting a retraction to print any day now," I said, signaling the server for another drink. Hey, I wasn't driving home, Felix was paying, and it was the first time since the twins had been born that I'd left the house without a diaper bag. I was going to enjoy my adult afternoon to the fullest. "So, how are we going to catch the thief?" I asked. "You want me to talk with Lana? Go undercover on her show? Ferret out some suspects among the cast?"

Felix gave me a funny look over the rim of his martini glass. "Maddie, love, you're a mum now. I wouldn't ask you to do any of those things."

I paused. "But didn't you just say you needed my help?"

"Your background on Lana is plenty enough help," he assured me.

"It is?" I asked, feeling a tiny prickle of disappointment.

"More than enough," he added. "Besides, I've got Allie on the story, and I'm sure if there is a thief at the network, she'll get to the bottom of it."

I felt a frown marring my perfect afternoon out.

Allie Quick was one of Felix's star reporters on the
Informer
staff. She also just happened to be his girlfriend, ten years his junior, and the living embodiment of Barbie. While my first impression had been dumb-blonde all the way, she'd actually proven to be a good reporter, so I had to give her credit there. However, I suddenly had the faintest feeling of being replaced by a younger model.

"But what does Allie know about fashion?" I protested. "I mean, I could at least have lunch with Lana. Get the details for you."

Again Felix shook his head, closing his blue eyes and doing a frown-slash-smile thing that had "patronizing" written all over it. "Don't worry a bit about it, Maddie. Allie's got it under control. In fact, she's meeting Lana this evening at her boutique to get the full story."

Kraken by M. Caspian
Selected Poems of Langston Hughes by Langston Hughes
Count It All Joy by Ashea S. Goldson
Shadow Spell: Book Two of the Cousins O'Dwyer Trilogy by Nora Roberts
Heat Wave by Eileen Spinelli
Revenge by Mark A. Cooper
The Family Corleone by Ed Falco
Place to Belong, a by Lauraine Snelling
Ticket 1207 by Robin Alexander
Giver Trilogy 01 - The Giver by Lois Lowry