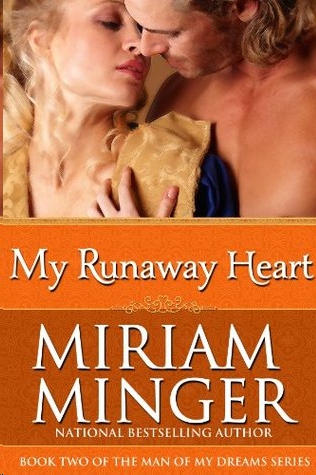 “Miriam
Minger
is a master
storyteller who illustrates the full gamut of emotions felt by her characters
.

Emotions so strong
that you are pulled into the pages and into their lives.” – Inside Romance

With the exception of quotes used in
reviews, this book may not be reproduced or used in whole or in part by any
means existing without written permission from the author.

This is a work of fiction
.

Any references to historical events,
real people, or real locales are used fictitiously
.

Other names, characters, places, and
incidents are the product of the author’s imagination, and any resemblance to
actual events or locales or persons, living or dead, is entirely coincidental.

Other Electronic Books by Miriam
Minger

A Hint of
Rapture

"Do we set her ablaze,
Cap'n
?
She's listing so far to port already, it won't take long—"

The damning words were spoken so low that they were
almost sucked up by the roar of the wind, but the captain made no effort to
repeat them. And the stumpy Irishman scrambled to obey his command. As another
howling gust tore at the captain's hair, the icy sting of salt spray plastering
his shirt to his body, he gripped the starboard railing and peered through the
gathering dusk at the doomed merchantman,
Superior
.

Galleys loaded with officers bobbed around the crippled
ship like ducklings reluctant to leave their mother's side, although one
longboat had turned into the wind to head for England. A harsh smile touched
his face. "What do you say, Walker? Think they'll see the flames in
London?"

"Ha! With all those munitions aboard? Damned if
they don't hear the explosion all the way to Boston."

The captain didn't respond, falling as grimly silent as
the raven-haired American standing behind him. Torches hissed to life along the
quarterdeck. Bright orange flames curled and clawed at the wind with malevolent
fingers. First one, then another, then a dozen torches
were
hurled across pewter-dark waves to the Superior, her billowing white sails soon
writhing like tortured souls in a maelstrom of hellish fire and heat.

Within moments the upper decks were a roaring pyre of
flame and the captain smiled again, his face as tight as his grip on the railing.
Hoarse cries of alarm carried to him from the galleys, plaintive wails to the
Blessed Virgin careening to the heavens.

"Yes, pray, damn you," he said under his
breath, watching as the frantic officers rowed like fiends to get themselves
clear of the burning ship. "Pray as if God had any time for man's piteous
affairs."

Blasphemy, he knew, but he was already damned. He didn't
flinch when an earsplitting explosion suddenly rocked the night, the
merchantman's foredeck blown to bits into the darkening sky. Red-hot sparks and
shards of burning wood pelted the sea like blistering rain. It was only then
that he gave the signal to unfurl the sails, and the sleek schooner cut cleanly
through the waves, leaving the merchantman to its watery fate. But he kept his
eyes riveted upon the flames even as another thunderous explosion ripped in two
what remained of the British ship.

Boiling, seething flames that only fed the inferno in
his soul, faces appearing to him against a backdrop of crimson fire and acrid
black smoke. The faces of beloved ones long dead and the faces of those he
lived to hate. He had lost so much, and what of the years that had been stolen
from him? Precious, irretrievable years . . .

Such fierce rage swept over him that his knuckles
whitened, his splayed fingers digging into the railing. A great hiss cut
through the wind, hot steam rising like a mist. The sea churned and bubbled
around the glowing carcass of what had once been a mighty trading vessel. Then
the merchantman was gone, dragged beneath the debris-strewn waves, and with its
disappearance he felt the rage begin to subside within him.

But the soul-deep chill remained. As icy cold as the
salt spray stinging his flesh. He turned from the railing, his hands cramped,
his fingers numb, and met Walker's gaze.

"See that the prisoners are fed, blankets all
around. The sea is up. It'll be a hard crossing to the Isle of Wight."

"True, but what better end to a tale they'll be
telling their children and grandchildren for years to come? It isn't every day a
ship's crew is escorted safely to land while their officers are made to row
home. Think they'll place wagers on their captain's skill at the oar?"

He made no reply to the American's wry response, having
grown accustomed long ago to Walker's grim humor. But right now he had no
stomach for it. He wanted to be alone. He wanted a brandy. He wanted an entire
bottle.

"Aye, it's him, the
cap'n
of this ship, didn't I tell you?" A young sailor's excited voice carried
from mid-deck, where the
Superior
's
crew stood surrounded by guards. "The scourge o' the entire Channel fleet!
'
Tis
the Phoenix himself,
and
wearin
' a gold mask to boot, just like
they been
sayin
' in London!"

The man they called the Phoenix was looking their way,
his jaw growing hard when he saw the older sailor nearly knock the youth to his
knees with a harsh cuff to the ear. His strides strong and furious across the
listing deck, he had the man by the throat before the astonished fellow could
blink.

"Strike him again and you're over the side to swim
back to England," he growled, his fingers tightening mercilessly around a
leathery neck. "Am I understood?"

Bulging blue eyes stared back at him in raw fear, an
Adam's apple gulping beneath his hand. "A-aye, sir, but I meant no harm to
the boy. No harm at all, I'd swear on me mother's grave! I-I can't breathe,
sir, please . . ."

Jarred by the deep, slurred bass which held the
faintest note of reproach, he bit back the memories of vicious blows raining
upon his own head and ears. With a vehement curse he released the sailor to
crumple gasping at his feet, while the other prisoners stared openmouthed at
the fair-haired, bearded giant whose height and breadth of shoulder cast a
hulking shadow across the deck.

A gentle giant—half his wits and most of his speech
lost to a metal ball still lodged in his brain—who helped to remind him of what
shreds remained of his conscience whenever it seemed he possessed none at all.

"Help Walker with the prisoners, Dag."

His low command greeted with a solemn nod, the captain
made for the hold while the deck erupted with activity, blankets being handed
out,
the
savory smell of beef stew tingeing the air. A
grim laugh escaped him.

Warm blankets. Beef stew. Safe passage back to England.
Hardly inhospitable treatment from the dreaded Phoenix, legendary plague of the
Channel fleet. But, of course, no ship's officers could say such gracious
things about him; even now those men pulling for their lives upon wet, slippery
oars were probably cursing his name.

Just as the British Admiralty would be cursing and
rattling their shiny dress swords when they heard of the
Superior
's fate. And the ton, always so quick to grow bored, would
have fresh fodder to add to the latest society gossip and scandal. Blast them
to hell; he could already hear them.

Oh, dear, how monstrously wicked! What a horror!
Another King's ship burned to ashes upon the sea! Ladies would swoon. Men would
bluster. Commotion would reign.

Blast them all to hell; he would enjoy every bloody
minute of it.

"Oh,
Corie
, I can hardly
believe you're here in London! The party was lovely tonight, wasn't it? And you
looked so beautiful in that green gown—no, no, sea foam sounds so much
better—yes, your exquisite sea-foam gown, and how perfectly it complemented
your auburn hair! And Lord Donovan looked so handsome and I'm so happy that
everything has worked out for the best—"

"Lindsay Somerset, you're making me breathless!"
her best friend replied. "Aren't you beginning to feel sleepy at all?"

Lindsay rolled onto her stomach, a sheepish grin on her
face as she met
Corisande
Easton's exasperated gaze.

No, no, not
Corisande
Easton
anymore, but Lady Donovan Trent, Lindsay reminded herself as she swept
white-blond strands from her eyes. And it was all so romantic, so
wonderful,
she would never tire of hearing the story, never

"No, I'm not sleepy, not a bit. How could I be?
Tell me everything again, will you,
Corie
? From
beginning to end—how you first met Lord Donovan, when he first kissed you, when
you knew you were in love with him. Everything!"

Fully expecting to be obliged, Lindsay eagerly rose to
a cross-legged sitting position in the middle of the huge four-poster bed and
tucked her linen nightgown around her knees. She hoped Lord Donovan's
last-minute business would keep him from
Corisande's
side just a little while longer, although from the pink flush on
Corisande's
cheeks, Lindsay imagined her friend was already
anticipating his return. As she followed
Corisande's
expectant brown-eyed gaze to the door, Lindsay felt a poignant tug at her
heart.

She was so happy for
Corisande
,
truly happy. She thought back to the last afternoon, four weeks ago, they had spent
together in Cornwall, just before she had left for London. They had clambered
onto a rock and shouted their secret pact to the four winds: neither of them
could wed anyone less than the man of her dreams. Had it been only a month ago?