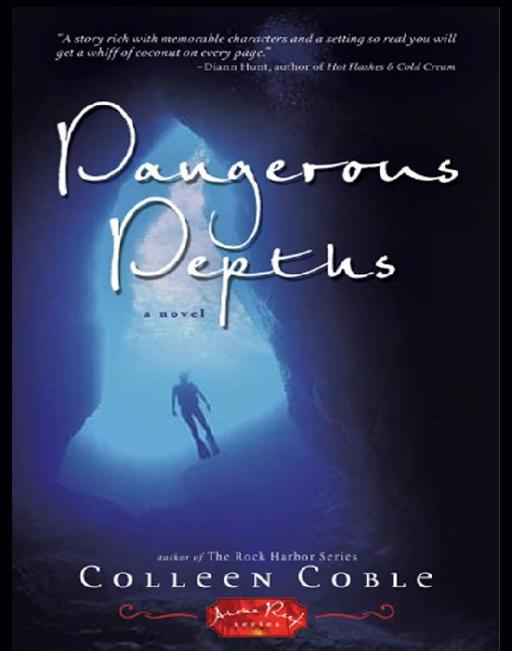 “Colleen Coble uses bold strokes of brilliance to paint a realistic picture of beautiful Hawaii. She then throws in a fast-action plot with plenty of suspense-filled twists to keep us guessing until the very end.
Dangerous
Depths
is another winner!”

—Hannah Alexander, author of
Fair Warning
and
Under Suspicion

“
Dangerous Depths
is a fast-paced adventure, where murder lurks among the hibiscus and bougainvillea. The story gives us a look at island life that goes beyond what tourists see, an exciting world of undersea diving and sunken treasure, plus a tender world of the heart. And there’s a scuba-diving dog too!”

“
Dangerous Depths
: exotic locale, delightfully memorable characters, and murder . . . it’s classic Colleen at her best. If you want to get swept away, look no further.”

“In
Dangerous Depths
, Colleen Coble gives her readers an exotic location, an exciting adventure, and a charming romance. Who could ask for any-thing more?”

—DeAnna Julie Dodson, author of
In Honor Bound,
By Love Redeemed,
and
To Grace Surrendered

“
Dangerous Depths
is a masterpiece of suspense, romance, and discovery. Colleen Coble delivers exotic intrigue, plunging us into the murky waters of the soul with skill and grace. She is a fabulous writer, giving her readers what they want and so much more! [This book] is not to be missed. Jump right in!”

—Kathryn Mackel, author of
Outriders,
The Surrogate
, and
The Departed

“In
Dangerous Depths
, Colleen Coble weaves an authentic tale of suspense and romance that will mesmerize! Set in Hawaii and brimming with colorful characters, [she] explores so much more than the bottom of the treacherous Pacific Ocean. Coble will win new fans with this latest installment of the Aloha Reef series.”

“True to her style, Colleen Coble has written yet another intriguing tale—this time set on the Island of Moloka’i amid myna birds, sunken ships, lost treasures, and . . . murder. Turn on all the lights, pour yourself a cup of coffee, and get comfortable. This third book in the Aloha Reef series is a page-turner from beginning to end.”

—Diann Hunt, author of
RV There Yet
?

OTHER BOOKS BY COLLEEN COBLE

Published in Nashville, Tennessee, by WestBow Press, a division of Thomas Nelson, Inc.

WestBow Press books may be purchased in bulk for educational, business, fundraising,
or sales promotional use. For information, please e-mail
[email protected]

Words Used in This Book

For my son, David,
whose strength and loving heart was the inspiration
for Bane in this book. May you always stand strong and
care for others the way you do now.

K
oma Hamai sat in the warm Hawaiian sun with his fishing net strung out on the volcanic rock. He muttered an ancient chant as he mended the net with gnarled fingers. Hansen’s disease had numbed the nerve endings in his fingers, and net mending was a hard job but one he found satisfying. There was nothing better than seeing something broken become useful again.

The ocean boiled and foamed with blue-green ire as it spent its power on the rocks, then came to lap at his feet with a cooling touch. He heard a sound behind him, back by the fishpond, probably one of the many axis deer that romped the jungle along the edge of the sea. When it came again, the furtiveness of the sound penetrated his contentment.

He stood and turned to investigate. The apparition staring back at him was like nothing else he’d ever seen in this life. From the head to the hips, the thing was round. Dark eyes stared out of a hard helmet, and the rest of its body was covered with some kind of green skin that looked as tough as a lizard’s. Koma backed away, forgetting his fishing net, then bolted and ran for his cabin. As he ran, he prayed his ninety-five-year-old legs would run as fast as they did when he was twenty, but with the limp from his broken hip, he knew he’d never outrun the monster. He didn’t want to end his life as food for Ku. Surely the thing chasing him was the Hawaiian god who built the first fishpond.

A predatory hiss sounded behind him, and he spared one final glance at the strange being. Ku aimed what looked like a speargun at Koma. He fired. The old man stumbled and the spear barely missed his back. He recovered his balance and ran for his life to his cabin.

Tree branches whipped at his face when he entered the jungle, but he was safe here. He knew these trees and paths the way he knew his one-room cabin in the dark. He paused, sensing no pur-suit. He peeked through the leafy canopy and saw the being moving off in the opposite direction. Ku never looked back as he moved off through the trees. Why not follow him to his lair? Koma was able to move without a noise through the jungle. He hurried after Ku along an almost impassable path to a cabin so overgrown with vines it was nearly invisible.

By the time Koma returned to his own cabin, the creature had grown in his mind to a height of fifteen feet and sprouted fangs.

L
eia Kahale rubbed an aromatic salve of crushed ginger, aloe, and other natural ingredients gently into the deformed hand of the old woman seated in front of her. Hansen’s disease was manageable these days, but the scars were not so easily erased. The sight of her grandmother’s missing fingers and toes had ceased to make Leia flinch long ago. To her, Ipo Kahale was the most beautiful woman to ever grace Moloka’i’s shores.

“That feels much better, Leia,” her grandmother said in a hoarse voice. Leprosy had taken her vocal cords as well as her lips and nose, and her words had a flat, toneless quality. “You should have been a doctor.”

“My mother agrees with you,
Tûtû.
I thought you had a pact to always take up different sides of the fence.” Leia put the salve down and stood. She was nearly a head taller than her grand-mother’s five feet, and
Tûtû
was practically skin and bones. Leia stepped out from under the shade of the coconut tree to test the pulp of the mulberry bark she was fermenting in wooden tubs of seawater. The odor of fermentation had been the most distasteful part of learning the ancient art of making bark cloth, but now she barely noticed the sour tang. She stirred the mess, then eyed the strips of
tapa
, or
kapa
as the Hawaiian version was called, she’d laid out for the sun’s rays to bleach. They could stand some more time in the strong sunshine.

“
Kapa
obsesses you,” her grandmother observed when Leia joined her on the garden bench again. “I was never so driven.”

“I wish I had your talent for the painting of it.”

“Already, you’re better than I was,
keiki
, but you try too hard.” She nodded toward the pots of fermenting bark. “You’re like the unformed cloth, Leia. There is much beauty and power hidden inside you. I grow tired of seeing you shrink back when you should be taking your place in the world. Look forward,
keiki
, not backward.” Ipo put her deformed right hand over Leia’s smooth brown one.

“I’m finding my way,
Tûtû.
I’m finally doing something I love. No more inhaling antiseptic for me.” Leia gave her grandmother a coaxing smile. “I love it here—the quiet that’s so profound it’s almost a sound, the scent of the sea, the strobe of the lighthouse on the point.” Kalaupapa, a small peninsula that jutted off the northern coast of Moloka’i, could be reached only by plane, mule, boat, or a long, strenuous hike down the mountain, but Leia liked it that way. She wasn’t hiding here at all, not really. “Besides, I’m needed here. The residents are eager to try my natural remedies.”

“It’s a good place for those of us who don’t want to face the stares of curious strangers. But you deserve more than a dying town filled with aging lepers.” Her grandmother caressed Leia’s hand with gnarled fingers.

“Like what—breathing smog in San Francisco? Besides, you’re wise, not old. Old is just a state of mind. When I watch you, I see the young girl inside,” Leia said. Today was going to be a good day. There was no sign of the dementia that often rolled in and took her grandmother away from her. Leia touched the tiny scar on her own lip. “I just want to learn more about making
kapa
from you. I like feeling an important part of this little community.”

She turned and looked toward the sea. Her nose twitched as the aroma of the ocean blew in to shore. Smells ministered to her soul—the scent of brine, the rich perfume of the mass of ginger and plumeria outside her clinic, the sharp bite of the ink for the
kapa
she made. Sometimes she wished she could guide herself through life by scent alone. Her garden had been taken over by her hobby. Lengths of
kapa
covered the rocks and tree stumps in the yard, and the wooden shelves attached to the back of the building bowed under the weight of supplies.

She stood and stretched. Usually by this time, her friend Pete Kone had arrived with a dozen teenagers to learn the process of making the bark cloth from her. The art had recently been revived in the Hawaiian community, and Leia taught a cultural class to eager young Hawaiians. “Where is everyone? It’s nearly eleven, and no one has come in.”