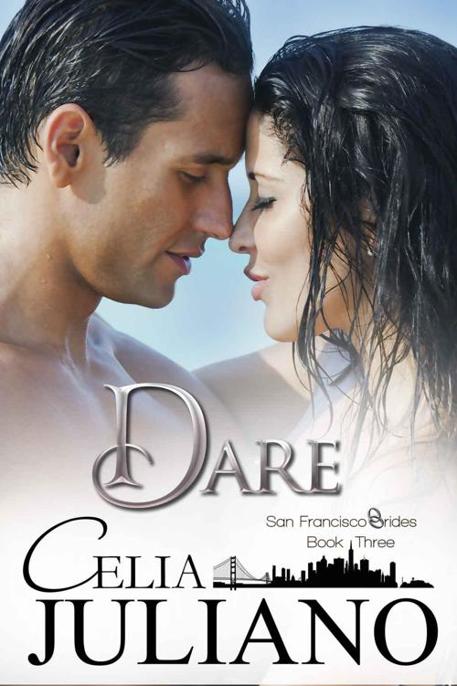 This book is a work of fiction. Any references to historical events, real people, or real locales are used fictitiously. Other names, characters, places, incidents, and scenarios are products of the author’s imagination. Any resemblance to actual persons, places, or events is coincidental.

All rights reserved. No part of this work may be reproduced in any format without the author’s consent. [email protected]

Thank you for downloading this book. I hope you enjoy reading the San Francisco Brides series as much as I love writing it. I grew up in the San Francisco Bay Area and want to share the magic of the places and people here with you. This series is especially close to my heart because many of the characters are inspired by my materal grandfather, born Salvatore Pietro Juliano, and his family. Grandpa loved to say, “Everyone in the world is either Italian or wishes they were” because he wanted to share joy. May you experience
la dolce vita
and
la grazie dell’amore
!

Joe D’Angelo has a good life—a career as a cop, his own apartment, a close family. But something is missing—the girl he can’t forget, Ariella Linda. When Ariella returns to San Francisco with her daughter after disappearing nine years before, he can finally get answers to his long-standing questions. First he has to contend with his family, Ariella’s secrets, and his fiery feelings.

Ariella’s dreams are coming true. She’s recovered from her abusive marriage, has a new job at a law practice, and she and her daughter are home, just in time for Christmas. Now she wants a family—and Joe D’Angelo. Will they dare to dream, or play it safe?

Joey slid money in the box for the candles. He glanced at the statue of the Madonna and child in the West Chapel of the church. The baby Jesus sat on his mother Mary’s lap, leaning into her, supported and loved. Mothers and children—the relationship didn’t stay as simple as the statue portrayed. Must’ve been hard for Mary, letting go of her son, but she had, with grace and caring.

“You light the candles,” Grandpop said. He bent onto the kneeler in front of the small crucifix and whispered a prayer.

Joey lit the candles for Grandma Angela and Aunt Teresa. Grandpop missed his late wife, Teresa, still wore his wedding ring, though it didn’t stop him from having female company. Joey understood. It was lonely, missing the one woman you really wanted. Like Grandpop, Joe appreciated women, but there was only one who’d ever captured his heart.

Joey bowed his head in prayer too, his hands clasped tightly, remembering all his loved ones who were gone. Including Ariella Linda and her family. For Ariella he said an extra prayer: that she was safe and happy, not dead like the others he prayed for. He shook out his hands.

Grandpop rose and they walked out of the small chapel. The church lights were dimmed, a signal they’d close the church soon. Midnight mass was over. The high ceilings and white altars evoked the heavens. Somehow the spaciousness of it all made him feel his prayers might be heard.

“Heard anything about Lorenzo and Lita’s baby?” That was why Gramps, Mom and the rest of the family weren’t here with them, like the usual Christmas Eve. They were home with Lita, who was in labor.

“No. Should be by morning. A Christmas baby.”

“Aunt Teresa and Grandma would’ve loved seeing the marriages and babies.” He voiced what he believed Grandpop and Gramps had been thinking lately, but they wouldn’t say it. The men in his family didn’t talk about feelings, if they could avoid it. He’d gotten as close to Grandpop as he was to his real grandfathers. Grandpop, who was his great uncle, had become a second Grandpa to him after Grandpa D’Angelo had died. Grandpop and Aunt Teresa had seen him through his parents’ split and rocky reconciliation when he was younger. He shook his head. Always the bad memories with the good when he came here.

Grandpop placed his hand on Joey’s shoulder. The space crackled with cold silence.

Joey nodded, and they walked toward the East Wall Shrine. Gramps, Grandpop, and Joey regularly lit candles for Ariella’s family. She’d appreciate that.

Please, Joey prayed again, let her be somewhere, alive and happy, not in the cold ground like her parents and sister. He crossed himself and looked up again. Then he strode to the shrine.

He stopped. A woman and a little girl stood in front of the candles by the shrine. The woman bent, her black hair fanning against her back and face. Her long legs were silhouetted as she stood, grasping the girl’s hand.

“Ariella?” he said from behind her.

Her back stiffened. She squeezed the girl’s hand tighter. She turned. Her features were as tight as her grip on the girl’s hand. But she was beautiful. More beautiful than he’d remembered. Still high cheekbones, pouty lips, that aloof look fashion models have. Until she smiled, a slight grin. He took off his coat, suddenly hot.

“Joey,” she breathed out.

Even his feet sweltered. Yep, she was still beautiful, still made his brain fog and…

She cleared her throat delicately, as if she sensed his inappropriate thoughts. “And Grandpop. I…” The girl tugged on her hand. “This is my daughter, Layla. Layla, these are my friends, Vittorio DeGrazia and Joey D’Angelo.”

“Nice to meet you,” Layla said.

“And you, young lady,” Grandpop said with a bow. “I hope you’ll call me ‘Grandpop.’”

Layla smiled. She looked a lot like Ariella’s little sister had. Questions flipped through his mind. The heat scorching him wasn’t all pleasant anymore.

“You’re both a sight for these old eyes.” Grandpop pulled a mini teddy bear out of his pocket. “Merry Christmas, Layla.”

Since when did he carry toys in his pocket? Layla’s smile beamed. Grandpop could charm a six-year-old as well as a sixty-year-old.

“Thank you!” Layla took the bear in her small hand.

“Are you here for long?” Grandpop asked.

Joey watched her. She didn’t look at him, only at Grandpop and Layla. And why not, the way he was scoping her out, the way they’d left things. He ran his fingers through his hair and glanced around. Grandpop ushered them toward the door.

“You remember Liz Bascom?” Ariella held Layla’s hand as they walked down the broad front stairs.

Grandpop nodded. Joey knew her too. She had mentored students at their high school who were interested in law. She had a small but well-respected law practice in the neighborhood.

“She’s offered me a job as a paralegal until I pass the bar here. I became a lawyer in Arizona recently.”

So that’s where she’d been. Why hadn’t Grandpop’s contacts found her when they’d looked nine years ago, if she’d been so close? He should have looked for her himself, not trusted Grandpop to do it, and he shouldn’t have given up the search. Except it had seemed like she’d wanted nothing to do with him, so he shouldn’t have searched at all.

Grandpop strode forward, toward where they’d parked. “Good, good. Where are you staying?”

“Nonsense. You’ll stay with me.”

“We couldn’t. You’ve already done so much for me…”

Joey snapped his gaze back to her. Grandpop and Gramps had been kind to Ariella after her family had died, but her tone was so sincere, so full of tears, he wondered if Gramps and Grandpop had done more for her after her family had died in that car wreck than taking her into their homes for the last months of high school. He shook his head slightly. No way. Grandpop and Gramps wouldn’t have lied to him. His chest tightened. Objectively, he’d question that trust, given the uncertainty he was feeling now, and the unanswered questions.

“It’s Christmas. You’re like family. You know I have plenty of room. It would be more fun for Layla.”

Layla tugged on Ariella’s hand with a hop. Ariella studied her daughter before pulling herself taller.

“You’re right. Then, yes, thank you.” She still hadn’t glanced at him again.

Hell, did he have dirt on his face, or some other embarrassing thing? Or was she ashamed of what they’d done, or blame him for it? He sure did. They’d made love, but it had only been love for him. She’d needed comforting, and he’d let his feelings for her overpower him. He’d thought she’d enjoyed it, but she’d gone while he was asleep, left him a note saying that it had been a mistake. He hadn’t seen her since. She’d disappeared, and no one had heard from or of her, until now. He slid his jacket back on, the chill night air slicing into him as they walked around the square.

She brushed her hair back. Long, wavy black hair… He began to reach toward her, the urge to run his fingers through the strands hampering his sense, an urge he locked down. He shoved his hands in his jacket pockets.

“Joey, you drive me home, then take Ariella to get their things.”

“No need, the hotel is just up the street a few blocks.” Her tone was clipped.

His shoulders tensed. Well, Joe, why the hell would she want to be alone with you? Her note had made it clear their being together had been a mistake. And she was right. She’d probably needed a shoulder to cry on, not him on top of her…and then her on top of him. He unzipped his jacket, the memory scorching through him. He was a man now, not a stupid teenage kid. Still, she affected him the same way as she had then.

“Still don’t like to accept help, eh?” Only Grandpop could get away with talking to someone like that. Especially someone as stubborn as Ariella…or as she used to be. He didn’t know her anymore. Hadn’t seen her for nine long years. Nine years he’d wondered about the only girl he’d ever loved, the one who’d left, the one who might have stayed if he’d done something different, better.

Ariella nodded. “Okay. Layla should be in bed.”

“That’s right, young lady. Santa and I are old friends, so he’ll know to find you at my house,” Grandpop said. He held out his hand, which Layla took.

“Have you visited him at the North Pole?”

“He visits me right here in North Beach.” Grandpop waved his hand, as if the brightly lit, building-packed streets were his domain. Light poles were festooned with greenery and ribbons and Christmas tunes floated on the cool breeze, as if proving his point that the spirit of Christmas was here.

The three walked forward. Joey followed. Out in the cold, again. He tugged his gloves on. He was used to the cold, the loneliness, even had befriended it. But with Ariella here, the cold seemed less welcome.

Now his “what if” could have an answer. He didn’t like unanswered questions.

A Little Change of Face by Lauren Baratz-Logsted
REMEDY: A Mafia Romance (Return to Us Trilogy Book 3) by M.K. Gilher
Body Image (Body Heat Series Book 2) by Madeline Parr
The Dragon's Banner by Jay Allan
Every Day Is for the Thief: Fiction by Teju Cole
Stone Fox by John Reynolds Gardiner
The Surge by Roland Smith
Conversations With the Fat Girl by Liza Palmer
Three for a Letter by Mary Reed, Eric Mayer
Lights Out Liverpool by Maureen Lee