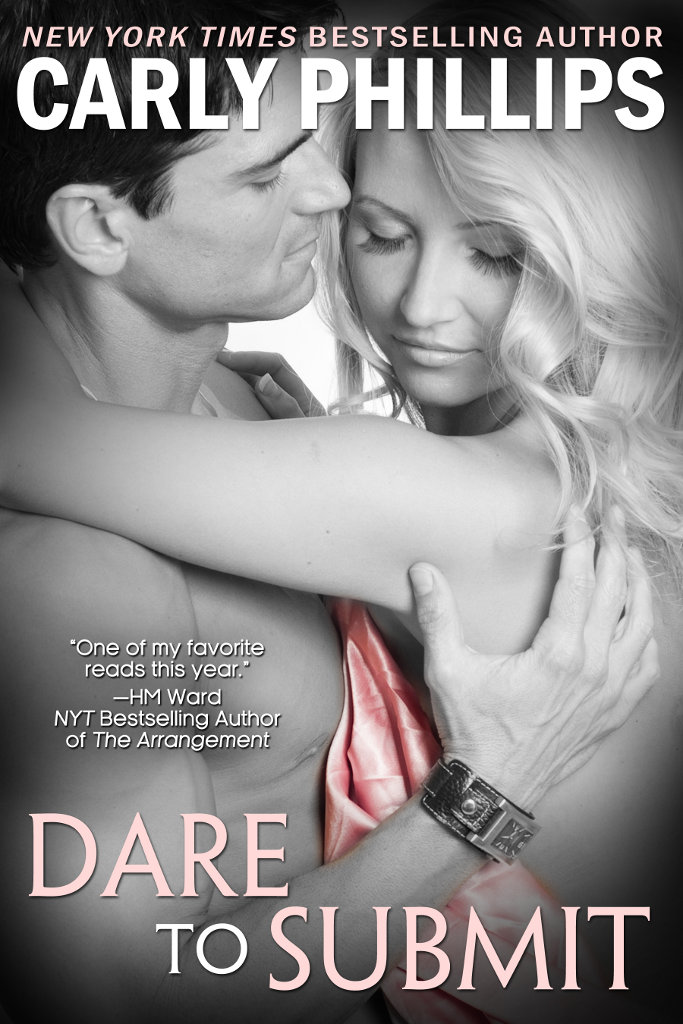 Book Four in the Dare to Love Series

NY Times Bestselling Author Carly Phillips turns up the heat in her newest sexy contemporary romance series, and introduces you to the Dare family… siblings shaped by a father’s secrets and betrayal.

“Carly Phillips is synonymous with red-hot romance and passionate love.”

Decklan Dare knows about the unexpected loss of loved ones and for this reason, he values control in all areas of his life. Amanda Collins enjoys the freedom she finds in casual encounters without the emotional connection a relationship brings. They meet and their physical attraction is mutual but both experience feelings that could run deeper – if they drop their guard and let each other in. Decklan is first to trust, but when he discovers the secret Amanda’s been hiding, will he forgive? Or will he rebuild every wall before she has a chance to explain?

All rights reserved. No part of this book may be reproduced in any form by any means without the prior written consent of the Publisher, excepting brief quotes used in reviews.

S
he submitted without the comfort he’d expect to see from a woman who’d been coming to this club for over six months. In the main room, members were in all states of dress, some naked, some in leather, all comfortable with themselves. She dropped gracefully to her knees, legs spread wide, palms up, and yet he sensed her discomfort from across the darkened room. The sound of pleasure, of sex, of pain echoed from the play areas nearby. To most, it was familiar, comforting. It should be the same for her, but her posture was too stiff, her entire demeanor, too wary. Possibly because she played with a different man each time. Searching for something. For what? Decklan Dare wondered, not that he understood why he cared. But she called to him. Had from the first.

So he watched her. Just as he watched for her arrival, uneasy when too much time passed between her visits. She didn’t show up more than once, sometimes twice a month. He wasn’t here much more often but tried to time his visits with what he knew of her past schedule. Ridiculous. She was just another female and not one he’d ever played with, at that. But she was soft and rounded in just the right places, curvy in a way that appealed to him when no one before had ever reached that deep.

He shook his head and told himself to move on. Find someone else. Someone who knew he had no expectations but for the night. But he no longer used the club for pleasure. He’d tired of it awhile back. He came to relax here with friends, that’s all.

His gaze fell back to
her
. She shifted her body uncomfortably and Decklan frowned. He’d always disliked protocol. He’d never expected it. Didn’t need it. He’d bet she didn’t either. She just needed a man she believed in, that was apparent.

Not him
. She looked too vulnerable for someone who took, gave the minimum, and walked away.

Decklan cocked an eyebrow. “Fighting what?” he asked although it was stupid to play dumb. Max knew him better than he knew himself.

“Yourself. Go play with her. Get it out of your system.” Max eased himself onto a barstool beside Decklan. “Better than watching her and wondering. Besides, you need to get laid.”

Decklan clenched his fist in his hand. His brother, Gabe, had told him the same thing. “You know as well as I do I can’t give her what she needs.”

Max barked out a laugh. “Like you’d even know what that is?”

“I can guess. Does she look like she’s found the right guy? She comes here and tries out different men. Obviously she’s not into exhibition, because she ends up in one of the private rooms for whatever her kink happens to be, he gets her off, and the next time, she’s on to the next guy.”

“Sounds perfect for someone who doesn’t do relationships,” Max said, gesturing to the bartender for his regular scotch on the rocks.

The club had a one-drink maximum. Alcohol and consensual play didn’t go well together. Decklan had already had his, ordered it the minute
she’d
walked in. One look at her curves, the full breasts, perfect indentation at her waist, and that luscious ass he’d like to squeeze, and only a drink would do.

“Or maybe she hasn’t found what she needs and she’s looking for a relationship of some kind,” Decklan said, guessing at what the beautiful woman was really in search of.

He didn’t do those. Had thought neither of the Dare brothers did those. He’d been wrong. Gabe had found Isabelle, and now Deck was left wondering if there was something wrong with him.

Max ran a hand through his longer blond hair. “You could always walk away after.”

That was the problem. Decklan was afraid one night with her wouldn’t be enough.

He scowled at the scene across the room. She still wasn’t comfortable, and Mike, her chosen man of the night, wasn’t a patient dom. The monitors had had to intervene more than once in a scene he’d performed, and Decklan watched the duo warily. Maybe that was what she sensed, what made her unable to find her peace.

But in position, her long blonde hair fell over her back. And Decklan’s groin tightened at the sight. Every cell in his body rebelled at the notion of the other man’s hands on her body, or worse, him thrusting into her wet heat. No doubt that would be the end result. Why else would she choose a private room for play?

“Let Mike fuck her tonight.” The bastard now tangled his hands in her hair.

“She doesn’t always sleep with the guys she plays with.” Max sounded pleased as he imparted the information, then took a long swig of his drink.

“How would you know?” Decklan asked, his shoulders stiffening even more.

The other man shrugged. “I negotiated a scene with her once.”

An unexpected wave of jealousy turned Decklan’s vision a blurry haze, and he grabbed Max’s shirt, only to have the man laugh in his face. “It was before you’d laid eyes on her.”

“And she wasn’t interested in having sex with me.” Max smoothed out his shirt, his grin still annoying the shit out of Decklan. “Does that change things for you? Maybe she’s not looking for anything but subspace and a couple of orgasms. Surely you can handle giving her that?”

Decklan closed his eyes, wondering if the lack of sex with her partners did make a difference. If she just came here to scene and relax, that he could handle. Maybe. But if she wasn’t sleeping with someone until she’d established a deeper level of trust, that was beyond his ability to give. But he didn’t know how much longer he could go on like this, watching, unable to get her out of his head.

The sound of raised voices caused his eyes to snap open.

Mike stood and she’d risen to her feet. Her full breasts nearly spilled over the leather corset binding her body with enticing hooks Decklan wanted to open one by one.

The dom’s face grew hard and he grabbed her hair.

Her eyes opened wide. “Red.” She said the word loud and clear.

Instead of releasing her, Mike yanked her hair harder.

In less than a heartbeat, with Max right behind him, Decklan was out of his chair and heading across the room. He wasn’t about to allow a woman to be taken advantage of in his presence. Especially not
this
woman.

“Come on, let me be the first one in this club to get into that pussy.” Mike, the dom Amanda had agreed to scene with tonight, pulled her hair harder than she liked, especially when she wasn’t near to being aroused by him.

“No.” She cringed at the thought. Hadn’t they already negotiated? Laid down the accepted rules and boundaries? She’d been uncomfortable all night, and now she knew why her instincts had been on high alert.

“No?” This time he yanked on her hair to show his displeasure. “What about me and my friend?” He spoke louder than was appropriate or necessary, and she blushed as people around them began to look. “One of us in that tight pussy, another in your ass?”

“Get your hands off her.” This from the man whose dark gaze followed her everywhere but whom she’d never met.

“What’s going on here?” John, a club monitor, approached. Fully dressed in leathers and wearing a badge indicating his status, his arrival was exactly what Amanda needed.

He turned a hard and pissed gaze on Mike, the man she’d stupidly opted to play with tonight.

He
stepped into her personal space, getting between her and Mike, the asshole. Apparently he had a protective streak.

“The lady said red. Mike didn’t respect it. You can take care of the bastard. I’ve got
her
.”

John nodded, pulling an argumentative Mike away for what looked like a good dressing down.

“Thank you,” Amanda said to her rescuer, admiring his take-charge personality, which turned her on as much as his good looks already did. She’d had her eye on him for months.

Cropped, jet-black hair and a strong, chiseled face that knocked her on her ass. He had an air of authority that aroused her.

“My pleasure.” He smiled, taking her breath away. Until now, she’d only seen him from across the room. His impact was more potent up close.

She only came to the club once in awhile, to try and get what she needed from a guy without the hassle of a relationship. It still amazed her she’d only ever really desired
him
. But he’d never approached her, and she wasn’t the kind of woman to take what she wanted from a man. Never had been. Didn’t trust the reaction she’d get in return. There was a reason she had a membership here, where expectations were laid out up front and if someone approached her, he wanted her, if only for the night.