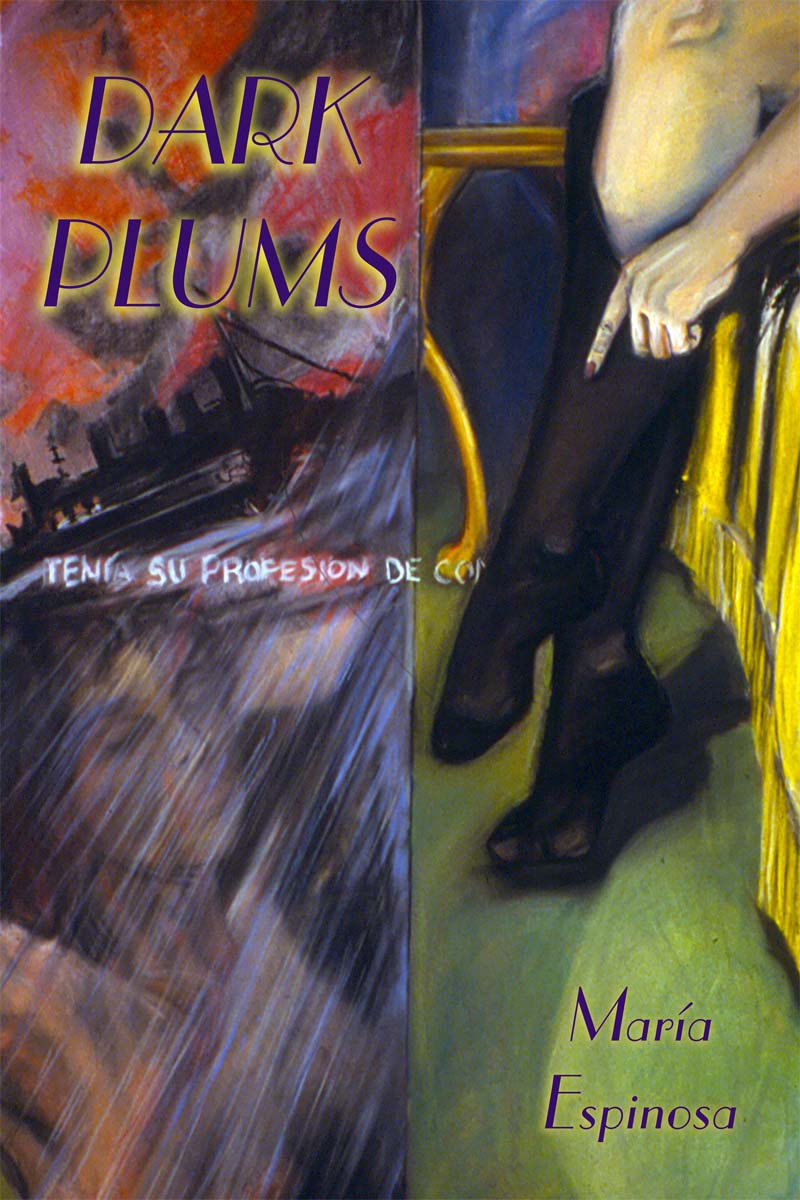 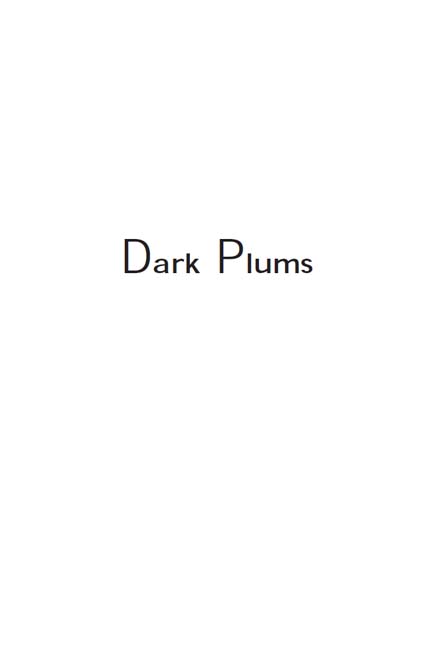 Other works by MarÃ­a Espinosa:

Incognito: The Journey of a Secret Jew 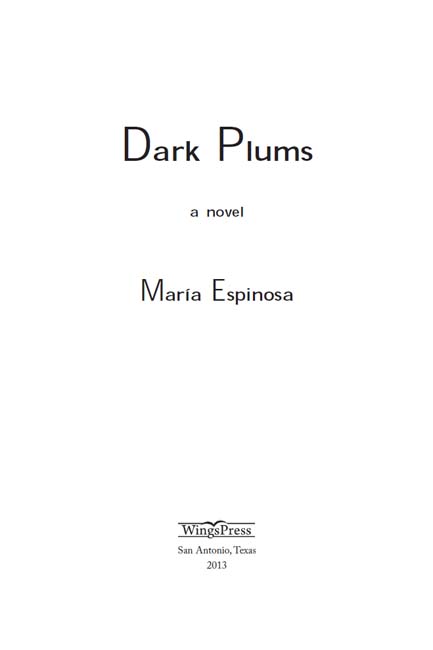 Dark Plums
was first published by Arte PÃºblico Press in 1995.

All Wings Press titles are distributed to the trade by

Except for fair use in reviews and/or scholarly considerations, no portion of this book may be reproduced in any form without the written permission of the author or the publisher.

Many people have given me support during the writing of this novel. I especially wish to thank Barbara Atchison, the late Josephine Michael, Helene Knox, Sally Headding, Lucha Corpi, and my daughter, Carmen, for their feedback and encouragement. Roberta FernÃ¡ndez has been a generous and insightful editor. My appreciation also goes to the Arte PÃºblico staff for their hard work. I am grateful to Bryce Milligan of Wings Press for making the novel available again in electronic form.

Heavy and dark are the plums. From the sweet poison of their flesh flows desire so intense the heart could be engulfed never to emerge.

A man in a pale green shirt was watching her. Adrianne could feel his gaze as she walked along Broadway in the steamy afternoon heat. In this humidity her bleached hair grew frizzy. She was tired from working at the office of Eureka Fabrics all day. Her high heels were beginning to hurt her swollen feet, while her dress, damp with perspiration, stuck too tightly to her large buttocks and breasts.

When the light changed, the man crossed the street, following her as she made her way uptown towards the Forty-Ninth Street subway stop. Three black teenage girls swung past him, laughing raucously, momentarily obscuring him from view. His attention made her spine tingle. This stretch of Broadway above Forty-Second Street never failed to fascinate her. The crowds seemed to throw out waves of electricityâpoisoned reds and greens, golds and heavy purples. After walking just a short block, she would feel breathless and drained of energy.

Two boys with tight trousers and slick hair were standing at a hot-dog concession. They nudged each other, laughing, as Adrianne walked by. What is so peculiar about me, she wondered. Why were people always laughing behind her back? She knew they did in the office, just as they had in high school.

Gerald was the only one who hadn't jeered. Gerald, where are you? she wondered. What are you doing at this very moment? Do you ever think of me? She glanced now at every man on the street, as if by some miracle Gerald might appear among them. But he was back in Houston. “Gull girl,” he used to call her in moments of tenderness, when he still loved her. “You have the breasts of a gull girl.”

Noises of traffic and people, blaring music from a record shop, and a slightly nauseating stench all assailed her senses. Further up 43rd Street a huge shovel swung through the air with a pendulous motion.

As she slowed to glance at her reflection in a window, the man in the pale green shirt overtook her. “Hello there,” he said. Transfixed,
Adrianne stood absolutely still while people continued to press on around them. Her image faded in the window glass. With his small eyes and narrow, reddish face, he reminded her of an animal that had been trapped underground.

Then he reached out and held one of her hands. Empty and lightheaded as she was feeling, there was comfort in his touch. As he moved a step closer, she held her breath. When he stroked her fingers, she fought an urge to press herself against him. His warmth was protection against the waves of human electricity all around her. However, she tried to wrench away. But he only gripped her more firmly.

His voice was commanding, with a rough edge. He pressed against her, and in spite of herself, she wanted him to hold her and soothe the anguish inside her, even if it were only for an instant. Love me. Take me in your arms. Oh, this was crazy, she knew. Yet she felt as if the crowd all around her could suck her into itself and leave her hollow as a gourd, while this stranger's touch defined her body and gave her a sensation of being solid.

Discarding all caution, she went with him to a hotel room which had peeling cream-colored walls. The maroon carpet was stained; the ceiling was cracked; the old-fashioned sink in the corner was coated with rust; while the greasy gray embossed bedspread exhaled such a mixture of odors that, lying on it, she felt as if her life were touching all those who had lain here before. He put his arms around her and stroked her buttocks. His lips pressed hard against hers, and his tongue explored her mouth. At last he released her.

“Why don't you take off your clothes,” he said.

Slowly she unzipped her dress and pulled it over her head. She removed her sweaty shoes, then peeled off her white brassiere and nylon panties. Sitting on the edge of the bed, she felt fat and unattractive. He took off his clothes, too. Pale and runty, he had a greenish cast to his skin, except for his ruddy face. A tattooed design of a woman encircled by a serpent covered one of his upper arms.

As he folded his clothes on the chair, he asked with seeming casualness, “Do you need money?”

Adrianne laughed. On an impulse she said, “Yes.”

With the money she could buy the beautiful dark dress she'd seen in a Macy's window. Its bell-shaped skirt would make her look thinner, and its low neckline would reveal the cleavage of her bosom.

She felt giddy in the dim light which seeped in through the closed Venetian blinds.

“Do you know that asking for money is prostitution? I can have you arrested.” His voice had grown menacing.

Maybe he was crazy.

She'd better do what he wanted, or he might hurt or even kill her. Why had she come here with him?.

As he stood naked in front of her, his cock, purplish and red and swollen like some prehistoric reptile, was pointed straight at her belly. Her fear and, perversely, her desire grew.

He gripped the back of her head and pushed her downwards. Kneeling on the carpet, she took him into her mouth. His odor was overpowering. His cock was so large that it was difficult for her to breathe as her tongue played against his pumping, slippery motions. She licked against the ridge. His testicles hung limp and full as she took them into her hand. His hands were pressing down hard against her head. Her knees were beginning to hurt. She thought of Gerald and the curious sweetish taste of his semen, the way he had of making her feel servile. She hoped this man didn't have any terrible disease. God protect me, she prayed. What was the point of living, anyway? Tears streamed down her cheeks as she pressed her hands harder against the stranger's buttocks.

“That's it, baby,” the stranger moaned, swaying against her. Then she tried to pretend he was Gerald. She tried to disconnect this stranger's personality from the hard, swollen flesh inside her mouth. Finally, he started to come. His liquid gushed inside her mouth, sour like brine. If she didn't swallow it, he'd be angry, and God knows what he might do.

Moaning, he continued to press her against him.

Finally, he collapsed on the bed, pulling her beneath him. She tried to hold back her nausea. Sweat ran off him in rivulets, dripping from his body onto hers. When she wrapped her feet around his knobby legs, she realized with a shock that he was still wearing his socks. Afraid he might catch athlete's foot? In her strange state of mind, this seemed hilarious. The man revolted her. If she had a pocket knife, she'd slit his penis lengthwise.

He began caressing her vulva, then inserted a finger inside her, and her anger fed her desire as she grew wet beneath his touch. His mouth clamped on hers, his tongue probed between her teeth, and she inhaled his breath.

The man's face was rough with acne scars. His hair felt sticky. She felt that he could be cruel, like Lucille. She remembered Lucille's French perfume and those thin lips pressing against hers.

He pulled her hand down to his penis. “Help me, sweetheart.”

She kneaded him between her fingers, and after what seemed an endless time, he hardened.

He was suckling her breasts. Momentarily, she felt that she floated out of her body and into his. She became his throbbing genitals. She looked at the world through his pale eyes as she guided him into her.

Adrianne could not understand it, but often she experienced what could only be called lapses of herself, as if she floated out of her body and into the other person's, and his will became hers. Now was one of those times, as she floated above both their bodies. She saw herselfâa plump, flushed girl with bleached hair spread out in a tangled mass over the pillow, and she watched himâa rabbity man pumping away at her.

Spasms of desire within her grew in waves, and she felt like a huge cunt coming against his body. Coming, coming. God, let her come. Finally she found release. He, too, made an explosive sound and collapsed against her, crushing her breasts.

Limp inside her, his body was even more nauseating. He smelled like a fetid animal. Adrianne wanted to pull away, but he was holding her too tightly.

The blinds rattled under the impact of an air current through the slightly opened window.

“Stephanie,” she lied, using a name she had mused over in her fantasies.

“You're a nice girl. I want to see you again. Where do you live, sweetheart?”

Un secreto bien guardado by Maureen Lee
The Unmapped Sea by Maryrose Wood
Hot Dog and Bob: Adventure 1 by L. Bob Rovetch
Guilty Thing by Frances Wilson
The Breakaway by Michelle D. Argyle
Emma vs. The Tech Guy by Lia Fairchild
On the Edge A Novel by Edward St. Aubyn
Bone of Contention by Roberta Gellis
A Is for Abstinence by Kelly Oram
Kiss the Enemy (Slye Temp) by Dianna Love