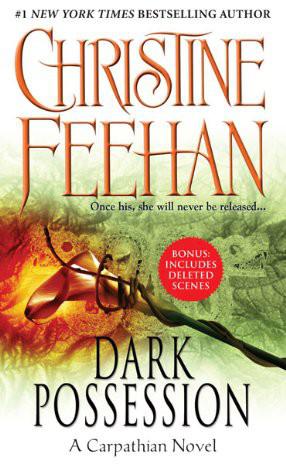 All rights reserved.
No part of this book may be reproduced, scanned, or distributed in any printed or electronic form without permission. Please do not participate in or encourage piracy of copyrighted materials in violation of the author’s rights. Purchase only authorized editions.

For Jaunnie Ginn, with love

Be sure to go to http://www.christinefeehan.com/members to sign up for her PRIVATE book announcement list and get a FREE exclusive Christine Feehan animated screensaver. Please feel free to e-mail her at [email protected] She would love to hear from you.

As with all works, one has so many people to thank. Cheryl Wilson and Kathi Firzlaff, who spent an amazing amount of time with me helping with details. Brian Feehan, for the long nights you stayed up letting me talk the story line through with you. Domini, you were amazing, working with me at the end until we saw it through. Tina, for providing me with all the little things so I could get the job done. But most of all, my husband, the love of my life, for understanding and supporting me through everything. M
anolito De La Cruz woke beneath the dark earth with his heart pounding, bloodred tears streaking his face and grief overwhelming him. A woman’s despairing cry echoed in his soul, tearing at him, reprimanding him, drawing him back from the edge of a great precipice. And he was starving.

Every cell in his body craved blood. The hunger raked at him with merciless claws until a red haze covered his sight and his pulse hammered with the need for immediate sustenance. Desperate, he scanned the area above his resting place for the presence of enemies and, finding none, burst through the rich layers of soil, into the air, his heart thundering in his ears, his mind screaming.

He landed in a crouch in the midst of dense shrubbery and thick vegetation, and took a slow, careful look around him. For a moment everything was wrong—monkeys shrieking, birds calling out a warning, the cough of a larger predator, even the brush of lizards through vegetation. He wasn’t supposed to be here. The rain forest. Home.

He shook his head, trying to clear his fragmented mind. The last thing he remembered clearly was stepping in front of a pregnant Carpathian woman, shielding mother and unborn child from a killer. Shea Dubrinsky, lifemate to Jacques, brother to the prince of the Carpathian people. He had been in the Carpathian Mountains, not in South America, which he now called home.

He replayed the images in his head. Shea had gone into labor at a party. Ridiculous that. How could they keep the women and children safe in the midst of such madness? Manolito had sensed danger, the enemy moving within the crowd, stalking Shea. He’d been distracted, dazzled with color and sound and emotion pouring in from every direction. How could that be? Ancient Carpathian hunters didn’t feel emotion and saw in shades of gray, white and black—yet—he distinctly recalled that Shea’s hair had been red. Bright, bright red.

Memories whirled away as pain exploded through him, doubling him over. Waves of weakness rocked him. He found himself on his hands and knees, his belly in hard knots and his insides heaving. Fire burned through his system like molten poison. Disease didn’t plague the Carpathian race. He couldn’t have become ill with a human disease. This was manufactured by an enemy.

Who did this to me?
His white teeth snapped together in a show of aggression, his incisors and canines sharp and lethal as he glared fiercely around him. How had he gotten here? Kneeling in the fertile soil, he tried to sort through what he did know.

Another jolt of blinding pain lashed at his temples, blackening the edges of his vision. He covered his eyes to try to block out the shooting stars coming at him like missiles, but closing his eyes worsened the effect. “I am Manuel De La Cruz,” he murmured aloud, trying to force his brain to work…to remember…pushing the words through teeth clenched tightly together in a grimace. “I have one older and three younger brothers. They call me Manolito to tease me because my shoulders are broader and I carry more muscle, so they reduce me to boy. They would not leave me if they knew I had need of them.”

They would never have left me. Never.
Not his brothers. They were loyal to one another—they had been through the long centuries together and would always remain so.

He pushed past the pain to try to uncover the truth. Why was he in the rain forest when he should have been in the Carpathian Mountains? Why had he been abandoned by his people? His brothers? He shook his head in denial, although it cost him dearly, as the pain increased, spikes seeming to stab through his skull.

He shivered as the shadows crept closer, ringing him, taking shapes. Leaves rustled and the bushes shifted, as if touched by unseen hands. Lizards darted out from under the rotting vegetation and raced away as if frightened.

Manolito pulled back and once again looked warily around him, this time scanning above and below ground, quartering the region thoroughly. There were shadows only, nothing flesh and blood to indicate an enemy close. He had to get ahold of himself and figure out what was happening before the trap was sprung—and he was certain there was a trap and he was close to being truly caught.

Throughout his time hunting the vampire, Manolito had been wounded and poisoned on many occasions, but still he’d survived because he’d always used his brain. He was cunning and shrewd and very intelligent. No vampire or mage would best him, sick or not. If he was hallucinating, he had to find a way out of the spell to protect himself.

Shadows moved in his mind, dark and evil. He looked around him at the growth of the jungle, and instead of seeing a welcoming home, he saw the same shadows moving—reaching—trying to grasp him with greedy claws. Things moved, banshees wailed, unfamiliar creatures gathered in the bushes and along the ground.

It made no sense, not for one of his kind. The night should have welcomed him—soothed him. Enfolded him in its rich blanket of peace. The night had always belonged to him—to his kind. Information should have flooded him with each breath he took into his body, but instead his mind played tricks, saw things that couldn’t be there. He could hear a dark symphony of voices calling to him, the sounds swelling in volume until his head pounded with moans and pitiful cries. Bony fingers brushed at his skin, spider legs crawled over him so that he twisted left and right, flailing his arms, slapping at his chest and back, brushing vigorously in an effort to dislodge the invisible webs that seemed to stick to his skin.

He shuddered again and forced air through his lungs. He had to be hallucinating, caught in the trap of a master vampire. If that was the case, he couldn’t call on his brothers for aid until he knew if he was bait to draw them into the web as well.

He gripped his head hard and forced his mind to calm. He
would
remember. He was an ancient Carpathian sent out by the former Prince Vlad to hunt the vampire. Vlad’s son, Mikhail, had, centuries since, taken over guiding their people. Manolito felt one of the pieces snap together as a bit of his memory fell into place. He had been far from his home in South America, summoned by the prince to a reunion in the Carpathian Mountains, a celebration of life as Jacques’s lifemate gave birth to a child. Yet he now appeared to be in the rain forest, a part familiar to him. Could he be dreaming? He had never dreamed before, not that he remembered. When a Carpathian male went to ground, he shut down his heart and lungs and slept as if dead. How could he dream?