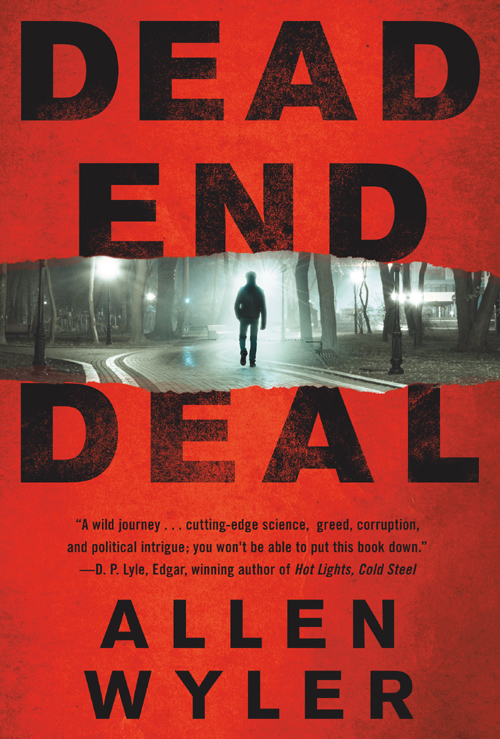 “
DEAD END DEAL
is a medical thriller of the highest order, reviving the genre with a splendid mixture of innovation and cutting-edge timeliness. Neurosurgeon Allen Wyler knows of what he speaks, and writes, and the result is a thriller that equals and updates the best of Robin Cook and Michael Crichton. His latest is terrifyingly on mark, riveting in all ways, and a masterpiece of science and suspense.”

—Jon Land, best-selling author of STRONG AT THE BREAK

“
DEAD END DEAL
by Allen Wyler is a masterful medical thriller, intelligent, ferociously paced, scary as hell, ripping with suspense, and filled with fascinating (and horrific) details that only a neurosurgeon-turned-writer like Wyler could provide. If you like the medical thrillers of Robin Cook or Michael Crichton, you will absolutely love
DEAD END DEAL
.”

—Douglas Preston, author of THE MONSTER OF FLORENCE and co-creator of the PENDERGAST NOVELS

“The gritty, graphic details of cutting-edge surgical procedures, capped with an exciting conclusion, should keep fans of the genre riveted.”

“With its lightning-paced excitement and fascinating science,
DEAD HEAD
has everything you could hope for in a medical thriller!”

“The suspense builds and builds in this riveting pageturner. It’s a skillful merging of the medical thriller and political thriller . . . Tom Clancy meets Tess Gerritsen!”

“You’ll be asking the nurse to swab your forehead when you’re admitted into this tense medical thriller exposing
DEADLY ERRORS
. Wyler does for hospitals what Benchley did for the ocean.”

“Wyler writes a fast-paced thriller, which reawakens your scariest misgivings about the Medical-Industrial Complex and the profit motive corrupting the art of healing.”

“
DEADLY ERRORS
has a fascinating and frightening premise that gives it the potential to be a best seller in the Robin Cook mold.”

“This is an ‘up all night’ pass into troubled places that only hardworking doctors know about, a turbulent world of trusting patients and imperfect humans struggling with the required image of perfection. Only a gifted surgeon like Allen Wyler could craft such a wild and wonderful best-of-the-breed medical thriller!”

“Wyler’s debut novel is both an engrossing thriller and a cautionary tale of the all-too-frequent intersection of high technology and higher greed. It’s a message all of us better pay attention to, or face the consequences.”

—Mark Olshaker, author of EINSTEIN’S BRAIN, UNNATURAL CAUSES, and TH E EDGE; co-author of MINDHUNTER, JOURNEY INTO DARK NESS, and THE CASES TH AT HAUNT US

This is a work of fiction. All characters and events portrayed in this novel are either fictitious or are used fictitiously.

All rights reserved, including the right to reproduce this book or portions thereof, in any form under the International and Pan-American Copyright Conventions. Published in the United States by:

S
EEMED LIKE A DYNAMITE IDEA
twelve months ago. Still did, for that matter. But now Marge Schwartz was killing him because of it. Sweat sprouted across Richard Stillman’s forehead, making him worry that any second now a drop would slither into an eye and cause him to blink, but he’d be damned if he’d wipe it. Besides, with what? The back of his hand? And if he did that, then what? Wipe his hand on his shirt? How would that look? No, he had to be tough, cool, unflustered. In essence: in charge.

Schwartz leaned forward on her elbows and drilled him with that squinty-eyed no-shit-serious look she’d mastered during her take-no-prisoners ascension through corporate ladders. “The board wants a solid plan to rectify the situation, Richard. Not some grandiose hypothesis.”

He swallowed the gastric reflux burning the back of his throat and willed himself to appear relaxed. Let her harangue. After all, that’s her job, especially given the financial disaster facing Trophozyme. A disaster for which he freely took responsibility. Yet, he still believed that with enough time their present track would be profitable. But that required more money and, the way things were going, the company would be bankrupt in six months. Unless he pulled the proverbial rabbit from the hat.

Easy for her to say. Especially with the clarity retrospection brings.

The board members sat eying him now with various emotions that were easy to read on their faces: empathy from Levy, disdain from Chandler, bored bemusement from Gliner. Warner, well, she was apparently more engrossed in her smart-phone than the bloodbath playing out before her.

Schwartz began collecting the various papers in front of her to replace in the manila envelope.
The bitch!

He flashed the vacant, non-threatening smile he’d picked up from their VP of marketing. One he practiced in front of a mirror until he could flash it under the most stressful conditions. He scanned the room, making eye contact with each board member—well, except for Warner—certain that every one of those smug egotistical bastards believed they could run the company better than he. Truth be told, their success was due to either dumb luck or magnificent ass-kissing. Or both.

Trophozyme needed a new blockbuster therapy. Their pipeline was drying up. With the patent on their only revenue-generating product expiring in less than a month, their competitors were already licking their chops, gearing up production of a generic substitute while several major shareholders were dumping stock. Once the short sellers started . . .

Schwartz said, “Need I remind you, Richard, you were hired to put our company back on track.”

The board had lured him with a fat signing bonus, a high salary, and a group of industry-savvy executives who had no idea where to take the company. To Richard Stillman, the future was obvious: by 2020, thanks to drugs like Lipitor, mortality from heart disease and stroke would be way down, making diseases like Alzheimer’s the leading cause of death. Any company to come up with an effective treatment would be sitting on a fortune. That treatment, Stillman believed, was to implant specially manufactured stem cells into patients’ brains to replace dead ones. The problem was the method he picked to grow them didn’t work. Okay, so maybe his first attempt was a bust. But he knew where to get his hands on the right method . . .

Sweat slithered into his right eye, stinging like hell. He inhaled and said, “As I’ve repeatedly advised, we must be patient. My vision for moving us forward remains unchanged. We’ve had minor setbacks, is all.” He shrugged to emphasize the mere insignificance of his mistake. “As my presentation showed, the results of our retinal implant program are excellent.” Two weeks ago his R&D team successfully implanted tissue-cultured stem cells into the retinas of three patients with a specific type of blindness. So far, the results were excellent in spite of being too soon to determine if patients’ eyesight actually improved.

Aronson, CEO of a major pharmaceutical company, waved away his remark. “All well and good, but even if this works, it’s an extremely small market, nothing that will keep this company afloat. We need revenue or we’re out of business.”

Stillman squelched a sarcastic reply. “Everyone understands that, Stan.”
You dumb shit
. “What we can’t lose sight of is,” he chuckled at the pun that no one else seemed to get, “our retinal implant program success will establish the proof of principle to Wall Street. Do that and we leverage the potential that cell implants may have on reversing Alzheimer’s.” He said this with the infectious enthusiasm that had served him well in securing financing for the previous companies he’d taken public.

Schwartz raised her hand to halt further discussion. “We’re getting wrapped around the axle here, Richard. Bottom line is that during our executive session we made a decision. Six months is all you get.” She paused, the room suddenly dead silent. “By then, either this company has a viable therapy or we’ll be forced to close down. Believe me, that happens and there’ll be no other business on the face of this earth, not even a mom and pop 7-Eleven store in Rwanda, that’ll touch your resume.
Do you understand
?”

Before he had a chance to answer, she yanked off her glasses. “Meeting adjourned.”

T
HE BUZZ FROM
the desk phone startled Jon Ritter. The sky was darkening, he realized, and streetlights now dotted the hill across Portage Bay. The phone buzzed again. He picked up, “Ritter here,” and swiveled toward the window to watch traffic shoot by on the 520 interchange.

“Hate to bother you, Doctor. Officer Schmidt, campus police. I’m in S-1 and it looks like someone broke into your car. Can you come down and take a look, see if anything’s missing so we can file a report?”

Aw, man
. . . He checked his watch. Already past seven, time to go home anyway. “Yeah, be right there.” After grabbing the sports coat off the door, he checked to make sure his file cabinets were locked. He decided to pick up some Thai take-out on the way home to eat while watching the Mariners.

He was walking past the secretary’s desk when Gabriel Lippmann called, “Good night, Jon,” from the chairman’s office.