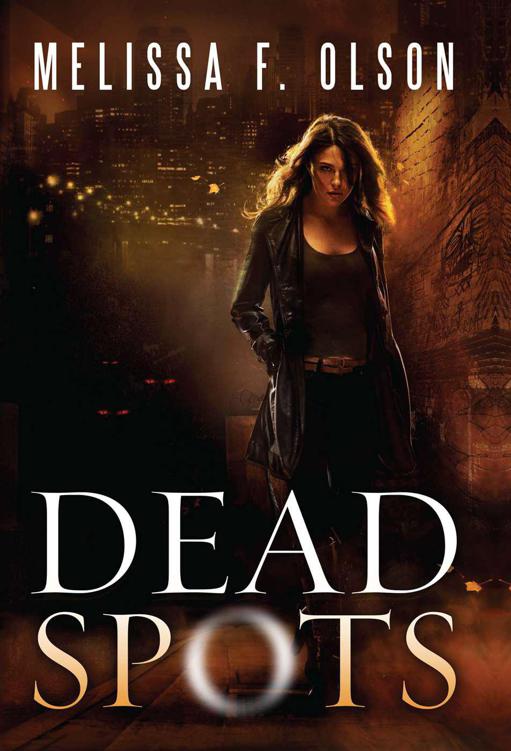 Text copyright © 2012 Melissa F. Olson
All rights reserved.
No part of this book may be reproduced, or stored in a retrieval system, or transmitted in any form or by any means, electronic, mechanical, photocopying, recording, or otherwise, without express written permission of the publisher.

For Mom and Dad, who rolled their eyes, shook their heads—and then backed me up every time.

His little sister was the better climber, to his disgust, but at twelve, she lacked Jared’s reverence for the trees, his respect. Emily would shimmy up, crow her victory, and skitter down again, laughing and breathless. It was Jared who loved to sit and listen to the wind, to find the perfect nook and watch the leaves move.

After their mother died, Jared and Emily took to the trees, escaping their house each hot summer night to sneak into the park at the end of their block. They stayed as late as they could to avoid having to hear their father cry and hiccup into his Jim Beam. Sometimes he brought women home—cheap, disposable women with acrylic nails and vacant eyes—and this was too much, too far. It was better in the park, where they could climb the trees. After the sun set, the mothers packed up their children and the joggers ran home. A listless park employee came to chain and lock the gate, and Jared could pretend they were out of the city and truly alone. Emily curled up at the bottom of a tree to read a book in the harsh streetlight, brushing at the ants. Jared would nestle into the branches above, humming so his sister wouldn’t be afraid.

One night at the end of September, Emily fell asleep, and Jared could listen to the wind and the quiet all by himself. He squinted at the branches, trying to see shapes and patterns, and wished again that the LA smog didn’t cover all the stars, that he could just pick
up and go somewhere clear. Somewhere with trees. He was supposed to have his learner’s permit by now, but his father couldn’t sober up enough to help him get it. Jared thought about his mother, who hadn’t been a saint but had tried hard, and his father, who was so weak and pitiful that Jared already felt as though he himself were the adult. He was turning this thought over in his head as he too drifted off to sleep.

When Jared opened his eyes, hours had gone by, and he almost fell out of the tree in his shock. He opened his mouth to yell for Emily, but closed it again when he heard the voices below. He squinted downward but couldn’t make out the figures surrounding the tree. Had they been discovered? How much trouble would they get in? Jared suddenly had a child’s impulse to hide, to leave Emily to take the blame, but after a quick flash of guilt, he began to creep slowly toward the lower branches. He relaxed an inch when he made out the two ordinary-looking young people talking to his sister. Just checking on her, probably. Before he could call down, though, one of them moved suddenly, and Jared heard Emily’s scream, shattering the air. He suddenly couldn’t move, couldn’t go help, even as he saw the second figure join the first: gently, reverently, biting down into Emily’s neck.

At 2:00 a.m., Eli’s ceiling fan made a sluggish
whug-whug-whug
noise and stopped moving. I know because I was staring at it.

It had been an unusually warm September in Los Angeles, and the temperature in Eli’s bedroom had to be pushing eighty. I threw off the sheets and muttered something along the lines of “stupid fan,” which made Eli stir beside me, rolling over and throwing an arm across my waist. He smelled like the sea, from surfing, and in the weak light from the streetlamps outside the window, his deep tan glowed against my pale skin. He nuzzled into my hair, and I was saved from having to awkwardly disentangle when my cell phone started playing a muted rendition of “Black Magic Woman.” Work. Thank God. I gently lifted Eli’s arm and rolled out of the bed, hurrying over to my jeans, which had somehow gotten thrown over the mirror on top of his dresser. Huh. Luckily, my cell phone had clung to the pocket, and I grabbed it and flipped it open. Yes, my phone still flips. It is also not smart.

Kirsten’s voice was cheerful and apologetic, as usual, directing me to a vacant house in Calabasas where a young realtor and her two friends had been playing with love spells. I picked up the men’s wallet I keep in my front pocket and pulled on the jeans and purple top I’d worn to the bar. Then I grabbed my keys and my knee-high boots and tiptoed out. I didn’t leave a note. He would figure it out when I got to the door, anyway.

Whenever I’m not around, Eli has to go back to being a werewolf.

I hadn’t felt drunk when I followed Eli’s pickup truck back to his place, but it still took me a few tries to find my van, which I guess is what happens when you drive after two glasses of whiskey. On the way to Calabasas, I used the stoplights to put on my boots and pull back the tangled mass of my long near-black hair. Even in LA, the streets were nearly deserted, and I had that creepy sensation that city people get when there’s no one around, like maybe everyone else in the world has died or left without your knowledge. Before I had to go too far into that pleasant line of thinking, though, the lady in my GPS announced that I’d arrived at my destination.

I pulled into the driveway of a raincloud-gray McMansion, and the witches—I use that term loosely—opened the garage door and waved for me to pull the van right in. They were nearly identical: all blonde, all scared, and all wearing some slight variation of light, sleeveless sweaters and what my mother used to call slacks. I would not have been able to pick them out of a lineup.

“Ms. Bernard?” said the blonde on the right, stepping forward. “I’m Sarah-Ann Harris. Thank you so much for coming.”

“Not a problem,” I said briskly. I slid open the van’s side door and grabbed my work duffel. “Tell me what’s happening.”

Sarah-Ann Harris glanced at her two friends, who looked away. “Um, well, we were trying this spell, you know, because Hillary’s boyfriend keeps cheating, and we wanted him to fall in love with her alone for forever?” She headed into the house, walking backward like a tour guide, and I followed her, with the generic blondes trailing behind us like a limp parade. Because they’re such a diverse collection of talents, I never know what I’m going to get on any given witch case, but the silent line of expensive highlights was a little unnerving. “There was this sacrifice part—”

“Chicken or dove?” I interrupted.

“Um, dove. But then we couldn’t go through with killing it because Ashley’s in PETA.” she babbled. Hillary and Ashley? Seriously? Worst witch names ever.

“And we were gonna just set it free, and then something happened...”

We rounded a corner, entering a spacious dining/living area with no furniture. I eyed the polished hardwood floors first and decided I didn’t need to bother with surgical booties. At the far end, glass double doors opened onto a three-seasons porch where I could see candles and books spread on the floor. As we came closer, I spotted a panicked little gray dove hopping frantically about in the doorway, and it took me a second to figure out what the big deal was. “Is its
head
on backward?” That was a new one, even for me.

“Yeah, um, I’m not sure what happened. We think maybe the pages got stuck in the spell book? And we did some kind of healing spell instead, only it didn’t heal?” Sarah-Ann said. “So, like, if you go near it, the dove’s head will go back, right?” She looked like she was about to cry. God.

“No,” I said grimly. I strode across the room, my boot heels striking the polished wooden floors like a timpani drum, dropped my bag, and bent down to pick up the terrified little thing. It cuddled into my chest for a moment, looking at my face with its backward-facing eyes. I took a deep breath and snapped its neck with my other hand. Ick. But at least its head was now facing the correct direction. When I looked up, Sarah-Ann and the clones were staring at me like I’d just stabbed a preschooler.

“But,” Sarah-Ann said in the reasonable, patronizing voice of a woman who’s used to getting the window booth, “we called for you. Kirsten said to call when something went wrong, and we did.”

I crouched in front of my duffel and retrieved a ziplock baggie the size of a shoebox, talking as I worked. “Ongoing spells undo themselves around me, and you couldn’t perform any kind of magic
within about ten feet of me. But the dove wasn’t really under a spell anymore, it was physically changed.” With the little body secured in the ziplock and the ziplock stowed in my bag, I turned back to the women, handing each of them one of Kirsten’s cards. “Sarah-Ann, I know you have this number, but here it is again, just in case. Kirsten will be expecting each of you to call her tomorrow morning to discuss what happened tonight. If she asks her questions and is satisfied with your answers, that’ll be the end of the matter. Do not make her track you down.”

They each nodded at me, frightened, and I took another deep breath, trying to stay professional. “Now, will there be anything else? Do you guys need help clearing up your spell materials?” They shook their heads in unison, still looking stunned, and I gave them a nod in return. “Then I’ll see myself out. Have a good evening.” I turned on my heel and marched out to the van, putting the little dead bird in the freezer compartment in the back. In the morning, I’d take it to Artie, my furnace guy. If it had been a human body, I’d have gone right away, but a dead dove wasn’t worth sneaking onto his property at 3:00 a.m.

Back in the van, I leaned my head against the steering wheel for a second. It irritated me that they had expected me to fix the dove, or maybe it just irritated me that I couldn’t. I’m a null, which means I can cancel out magic within a radius, but I have limits, too. As I sat up and turned the ignition, my cell phone rang again, and I checked the caller ID. Dashiell. Great. A vampire was just what my night needed. I flipped it open. “Bernard.”