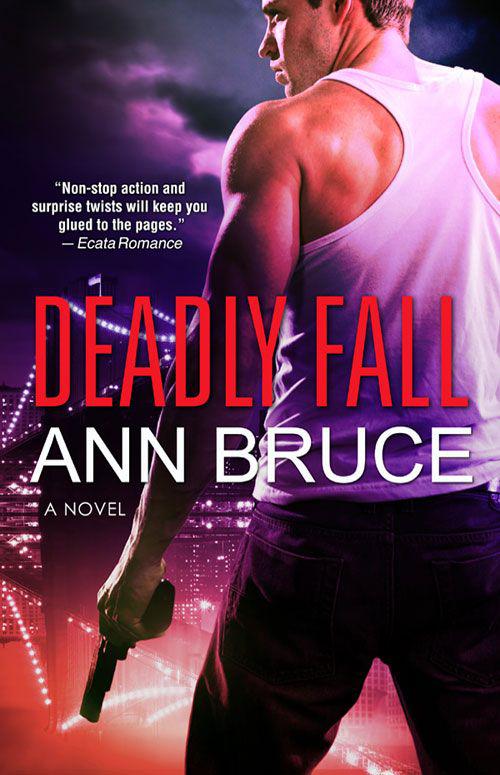 When his latest case falls on him and his partner—quite literally—Detective Nick Markov knows the destruction of his car by a not-yet-cold body is the least of his worries. The deceased is prominent businessman, Andrew Langan, and suicide is swiftly ruled out after Nick pursues the killers down twenty-seven flights—and loses them.

To his superiors’ frustrations, Nick doesn’t believe Langan’s soon-to-be ex-wife, Augusta, is guilty, even though she has motive, opportunity, no alibi and a shady past. The only reasons Nick has for going against logic are the feeling in his gut and the constriction in his chest.

Augusta is thrust back into an unwanted spotlight and her quiet life shattered. Then things go downhill. In between dodging the media, she confronts muggers, kidnappers and goons better dressed than she. With Nick, who dredges up a past she’d rather forget and feelings she’d rather not acknowledge, Augusta must race to unravel her late husband’s secrets before she finds herself skydiving without a parachute.

With the exception of quotes used in reviews, this book may not be reproduced or used in whole or in part by any means existing without written permission from Ann Bruce.

“Damn it, Ethan,” Nick Markov muttered, trying to steady his drunken partner and keep him from falling flat on his face and doing permanent damage to it. “Your wife’s going to have my ass for this.”

Ethan Murtagh’s scowl bordered on a pout more suited to a two-year-old. “I can walk on my own two feet,” he said, his words only slightly slurred. He stumbled, nearly taking them both down.

It was several frustrating moments before Nick managed to strap his partner into the passenger seat of the black SUV parked in front of the bar. Ethan had been, once again, trying to drink himself into a stupor. He didn’t handle disagreements with his significant other well. The current dispute was over the photographer who had shot his wife’s swimsuit spread the previous week in the Bahamas.

“You’d better hope Torie’s asleep when I get you home,” Nick said, getting behind the wheel.

A disgruntled sound came from the sprawled figure beside him. Nick answered with a grunt of his own as he pulled out. At almost one in the morning on a Wednesday night, it was relatively quiet in the Sixties on the Upper East Side, so it was a few short minutes before he was turning onto Fifth Avenue. Deciding it wouldn’t take long to get Ethan upstairs and into his nineteenth-floor condo, Nick stopped the SUV in front of the building, killed the engine and flipped down his visor to display his credentials. He released his seat belt buckle, then reached over for his partner’s. Ethan mumbled a protest, swatted at Nick’s helping hand and fumbled with the door handle. Suppressing the urge to roll his eyes, Nick grabbed a fistful of his partner’s jacket.

“Stay put,” Nick said. “You open that door, you’ll land on your pretty face and Torie will never forgive me.”

Ethan fell back in his seat, head tilted back, eyes closed. Satisfied, Nick opened his door, got out and made his way to the passenger side door. Ethan didn’t move when he pulled the door open. Nick silently groaned at the possibility of having to carry his less-than-petite partner upstairs.

Before Nick could reach for his semiconscious partner, small pebbles pinged the roof of the SUV and bounced off his head and the sidewalk. Frowning, he skimmed a hand over his hair and his gaze across the roof of his vehicle. The pebbles glittered faintly under the mellow glow of the streetlight.

Nick glanced up—and froze, his gaze transfixed by the body above him.

With a faint sense of incredulity, Nick stared, breath trapped in his lungs, as the blurred line of stark paleness grew larger and sharper as gravity closed the distance between its victim and the sidewalk. He couldn’t tear his eyes away from the white face seemingly directly above him. For timeless seconds, that was all he saw, but his mind filled in the rest with disturbing clarity. He saw the wide open mouth and the rounded eyes, filled with the horrifying knowledge of one’s own imminent death.

Nick was wrong about two things—the body wasn’t directly above him, and the ground wouldn’t stop its free fall.

It was directly above the SUV.

His own eyes widening at this realization, Nick fisted his hands in Ethan’s jacket, hauled his partner from the vehicle and jumped back, grunting when the edge of the door caught his shoulder. Ethan stumbled and both men went down hard as the body met metal.

The sickening thud was nearly drowned out by the explosive crunching of metal and shattering of glass as the SUV gave like an aluminum pie plate under the sudden force.

As the squeaky sound of the SUV’s shocks being tested beyond their limits mingled with the other sounds of destruction, Nick, his heart somewhere in the vicinity of his throat, found himself flat on the ground, face first, his head covered with his forearms. The damp, industrial scent of the sidewalk filled his nostrils as he took in the heavy, metallic clinking sounds as parts fell off the vehicle.

Nick opened his eyes, lifted his head and pushed to his feet. Without conscious thought, he withdrew his gun and turned around. He stood on the street, the worn handle of his Glock comfortable and familiar in his grip, and took in the remains of his SUV. The new hood ornament had slammed onto it with enough force to bend the front hood into an imperfect V, partially obscuring the body from Nick’s view. The windshield, torn from the top of its frame, was split in two down the middle. The jagged, incomplete halves—spider webs of shattered glass held together by the thin, inner layer of plastic laminate—disappeared inside the SUV’s dark interior.

Nick took a step closer, his mouth tightening as his gaze dropped. A stark face stared at him from the dashboard. Dark hair topped glassy, unseeing eyes, a bent nose and a mouth opened wide in a silent scream. Blood, thick and dark, seeped from the matted hair to pool on the leather. There was no need to check for a pulse.

Ethan’s shocked whisper brought Nick’s attention around to him. His partner swayed for a moment, then slapped one hand against Nick’s shoulder to steady himself. Blood trickled down the left side of his forehead from a gash that disappeared into his hair. He was sobering up by the second as he stared at the body. Homicide detectives they might be, but they’ve never had a case fall on them literally.

Nick swiveled his gaze back to the front of his SUV and blinked, but the image before him didn’t waver.

The male body was a tangle of arms and legs bent at awkward angles nestled in the damaged hood of the SUV.

There was nothing that he could do.

Something heavy settled inside Nick, as it did every time he saw a body. Not bothering to shake off the feeling, he peered up the high-rise—and caught a flash of pale color on the top terrace.

The suicide just became a homicide.

“There are easier ways to commit suicide,” Ethan murmured.

“I don’t think he jumped,” Nick said, head still tilted back. “He was helped over the penthouse terrace.”

Nick’s eyes narrowed, the corners of his mouth turning down even more. That hazy circle of paleness was gone. “Shit. The perp’s running. Come on.”

Nick raced inside the building, through the glass and brass double doors and into the lobby, Ethan on his heels. The uniformed concierge on duty, a part-time NYU student, was in front of the reception desk with his back to the front doors. At Nick and Ethan’s entrance, he dropped the phone in his hand, spun around and jerked his head up, rounded eyes darting every which way.

“What was that noise? Are we under attack?” he demanded, looking like he was on the verge of hyperventilating. “I was about to call nine-one-one.”

“Do it, Charlie. Then get under your desk and stay there,” Nick ordered, already moving toward the elevator bank. “Someone just took a plunge from the penthouse terrace.”

Charlie’s mouth moved, but Nick couldn’t make out the whispered words. Blood drained from the boy’s face, reminding Nick of the one he had just seen lying on his dashboard.

“Nine-one-one and under the desk. Now!”

The concierge stared blankly at Ethan as if he was spouting Latin.

“We don’t have time, Ethan.” Nick jabbed the elevator button. “We’ll kick the door down if we have to.”

A ding sounded and the first set of elevator doors began to slide open. Nick stepped to one side, thumbed the safety off his gun and aimed it at the parting doors. The car was empty. He reached inside the open elevator and pushed the red STOP button. The elevator made a screeching protest.

With the first elevator out of commission, the perp would have to take the second elevator down to the lobby, where Nick and Ethan would be waiting.

Nick jabbed the elevator button again for the second car. If it was empty, he would take it up to the penthouse. Hopefully, he would apprehend the perp before he got creative and realized that he could hide in one of the other condos. Chances were, the perp didn’t even suspect two NYPD detectives were in the building.

Thanks to the lateness of the hour, the second elevator was swift. Nick aimed his gun at the widening opening in the doors. The car was empty like the first.

“Damn.” Nick looked over his shoulder. Ethan was riffling around under the reception desk. Charlie was still frozen. “Ethan, we don’t have time for that. Let’s move.”

His partner muttered something—most likely derogatory—under his breath, but he joined Nick in the elevator car. Nick punched the twenty-seventh floor button.

Before the doors slid shut, Nick said, “Charlie, get under the desk and don’t do anything stupid.”

It seemed to take forever for each floor number to light up. The atmosphere in the elevator car was thick with anticipation. At the periphery of his vision, Nick saw Ethan pause a moment too long with his hand inside his jacket before withdrawing his own weapon.

“I’m fine,” his partner said, shaking his head as if to clear it. “I can still aim and shoot.”