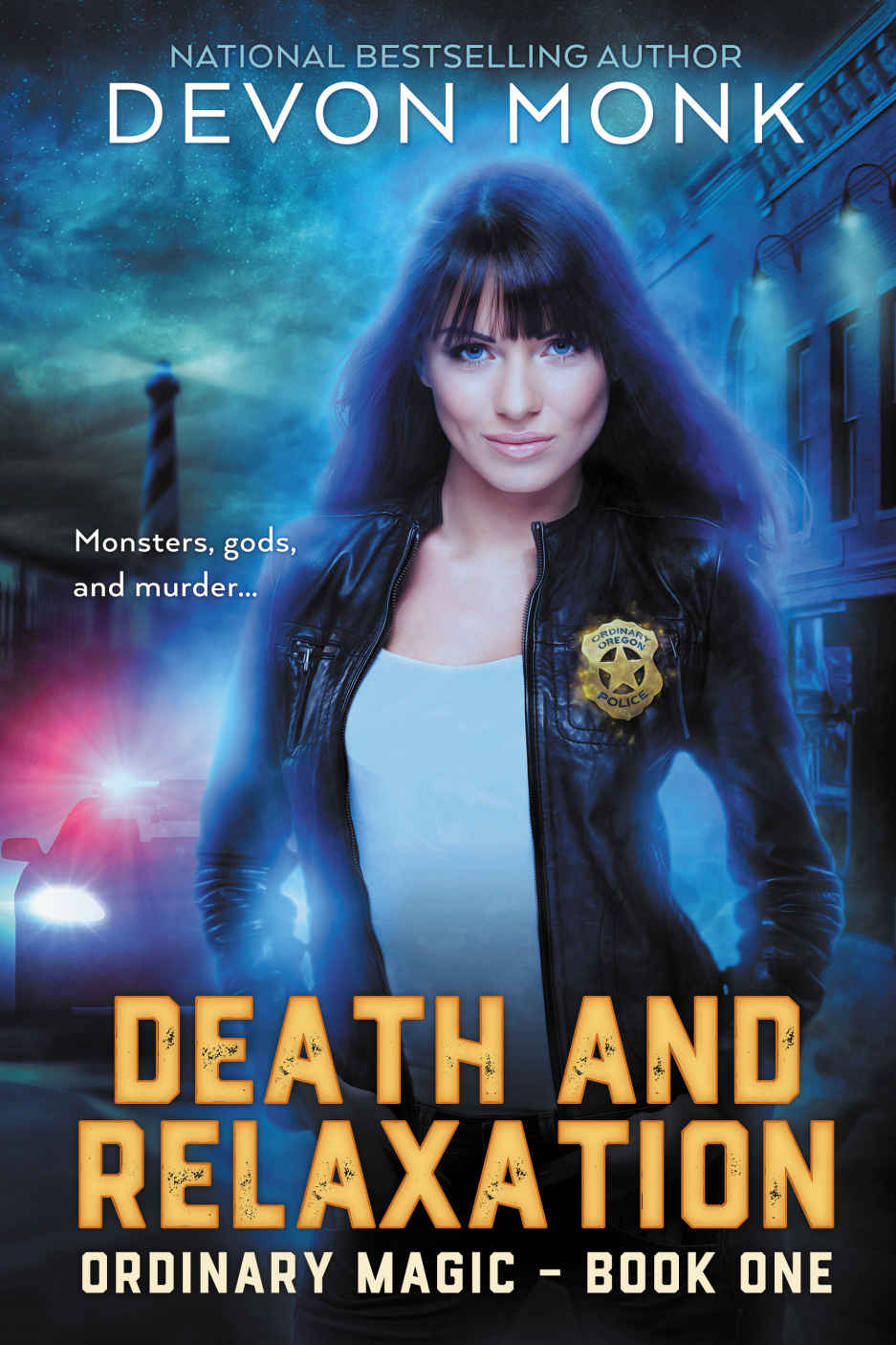 All rights reserved. No part of this book may be reproduced, scanned, or distributed in any manner whatsoever without written permission from the author except in the case of brief quotations embodied in critical articles or reviews. This story is a work of fiction. Names, characters, places, and incidents are the product of the author’s imagination or are used fictitiously, and any resemblance to actual persons, living or dead, business establishments, events or locales, is entirely coincidental.

Police Chief Delaney Reed can handle the valkyries, werewolves, gill-men and other paranormal creatures who call the small beach town of Ordinary, Oregon their home. It’s the vacationing gods who keep her up at night.

With the famous Rhubarb Festival right around the corner, small-town tensions, tempers, and godly tantrums are at an all-time high. The last thing Delaney needs is her ex-boyfriend reappearing just when she’s finally caught the attention of Ryder Bailey, the one man she should never love.

No, scratch that. The actual last thing she needs is a dead body washing ashore, especially since the dead body is a god.

Catching a murderer, wrestling a god power, and re-scheduling the apocalypse? Just another day on the job in Ordinary. Falling in love with her childhood friend while trying to keep the secrets of her town secret? That’s gonna take some work.

To the makers and dreamers and believers of everyday magic.

And to my family, with love.

“DELANEY,” MY father whispered. “Wake up.”

I reached for the gun under my pillow and pushed the quilt aside. My heart hammered as I searched the shadows of the room for my dad.

He wasn’t there. And he shouldn’t be. He’d been dead for a year now.

“Dad?” I asked anyway. No reply. I took a few steady breaths until the dual waves of hope and grief that had crashed down over me were gone.

The night of his death was still embedded in my mind. My sisters and me responding to the emergency call. His truck crumpled at the bottom of the cliff. Ben Rossi and Jame Wolfe in their fire-fighting gear, rappelling down the sea cliff to bring his body out of the cab.

It hadn’t been raining. The moon was full and bright enough I had almost forgotten to turn on the headlights of my Jeep.

That night had ended what I’d always thought of as a normal life. The very next day I’d stepped up as Dad’s successor as both the chief of police and the eldest Reed in town: the confidant to gods and monsters.

I set the gun next to my badge on the wooden stepladder I used as a side table and sighed.

It was going to take a lot of caffeine to get me through the day.

I stood and tugged at the Grateful Dead T-shirt that had belonged to Dad. I hadn’t had the heart to give it to the thrift shop when we went through his things. I thought both my sisters had kept something of his too, probably something of more value. But I liked the comfort of something he’d loved and lounged in.

I rolled my shoulders—a little stiff from yesterday’s run—and bare-footed it through the small living room and into the kitchen.

“If you are going to haunt me, Dad, I could use some helpful poltergeist action around here. Fold the laundry. Start the coffee.”

I knew Dad wasn’t listening. It was probably just a dream that had brought me awake so fast. But now that I was living alone in the old family home—both sisters moved out, no boyfriend moved in, both Dad and Mom gone—I’d fallen into my childhood habit of talking to myself.

“They say talking to yourself is a sign of genius,” I said around a yawn.

I pressed the button on the coffee pot I’d pre-loaded only a few hours ago and pulled a Chewbacca mug out of the cupboard.

I bit back another yawn and scooped sugar into where Chewbacca’s brains should be.

I felt like I hadn’t slept in a year. Taking over as chief of police in Ordinary, Oregon, on the heels of Dad’s death had been hard even with my sisters Myra and Jean right beside me. It might have been easier if Cooper, my oh-so-ex-boyfriend, hadn’t also decided to run off to “find himself” a week after the funeral.

But then, maybe it was better to have my heart broken by both Dad’s death and my boyfriend’s restless urges in such a short span of time. Breaking, that hard that fast, made the rebuilding easier.

“Sweet-talking Cooper Clark, the heartbreak hit-and-run I should have seen coming a mile away, you did me a favor by leaving. Life is so much easier without love.”

I ignored it, just like I’d been doing for the past year, throwing all my energy into my job as peacekeeper, guardian, and law for all the mortals, creatures, and deities who made Ordinary their home.

The normally quiet, if abnormally quirky, town would be transformed into a bustling little city over the next week or so.

If I got more than three hours of sleep between now and Friday when the Rhubarb Regatta sailed to shore for the festival blessing, it’d be a miracle.

I believed in a lot of things. I had to. Not only to keep the peace between the mortals and creatures who lived here full time, but also to deal with the gods, goddesses, and deities who used the town as their official getaway vacation destination.

Growing up here, I had played spin the bottle with werewolves, crabbed the bay with Poseidon, and smoked my first (and last) cigar with Shiva.

But I had yet to see a true miracle.

I poured coffee and took it to the little kitchen table in the nook by the window that looked out over the Pacific Ocean. It was hours from dawn, the landscape bathed in ink. But sitting at this table with coffee was one of my favorite quiet places. And I’d need all the quiet I could get if I were going to survive this week.

A wash of ice prickled up the back of my T-shirt.

A flash of orange cut through the darkness, burning my vision. Thunder blasted hard, close, loud, rattling the windows and setting off car alarms.

I ran to the bedroom, shoved on jeans, boots, and jacket, my mind spinning through possibilities.

It wasn’t a god thing. Those powers were carefully locked away while the gods vacationed here. It wasn’t a creature thing either. No creature in town could light up half the sky.

I grabbed for my phone and keys. My cell rang.

“Delaney?” It was my sister, Jean. “Explosion. Southeast.”

“Got it.” I jogged out the door, not bothering to lock it. “Injuries?” I ran down the thirty steps to my Jeep at the bottom of the hill.

“Calls coming in. Hold on.”

I ducked into the Jeep. Started the engine.

The house lights flashed on at the other three occupied houses tucked against the hill on this dead end overlooking the Pacific.

No one could have slept through that.

“Here.” I thumbed on the speaker and dropped my phone in the coffee holder.

“It’s Dan Perkin’s place. Every neighbor within four blocks says the explosion went off in the field behind his shed.”

“Fire’s on the way. Pearl said Dan is fine. Angry as a snake in a knot, but uninjured. No other injuries reported.”

“Delaney? I have a bad feeling about this.” Jean didn’t bring it up much, but her gut instincts were usually dead-on. “Be careful.”

“Copy that, sister.” I flipped on the Jeep’s light bar, followed the gravel road down to the cross street, and gunned it out to Highway 101, which cut the town into north/south.

“Just don’t anyone be dead,” I muttered as I sped down the mostly empty road. “Everybody stays breathing in my town, on my watch, in the middle of the night. Ordinary stays ordinary. No killer freak explosions.”

I got to Perkin’s place in under a minute and took half a second more to bind my long brown hair back in a ponytail as I stepped out of the Jeep. Not exactly the most professional look, since I was still wearing the Grateful Dead T-shirt and jeans, but it wasn’t the clothes that made me an authority on this scene.

I crossed the gravel road to the small crowd of mortal neighbors gathered at the edge of Dan’s front yard.

Sons of Lyra: Slave Princess by Felicity Heaton
The Lonely Mile by Allan Leverone
The Heat Is On by Jill Shalvis
French Twist by Glynis Astie
Forever Ours (The Billionaire Next Door Book 8) by Paradis, Violette
The Flight of Gemma Hardy by Margot Livesey
Nerves of Steel by Lyons, CJ
Bitterwood by James Maxey
E. W. Hornung_A J Raffles 02 by The Black Mask
MasterofSilk by Gia Dawn