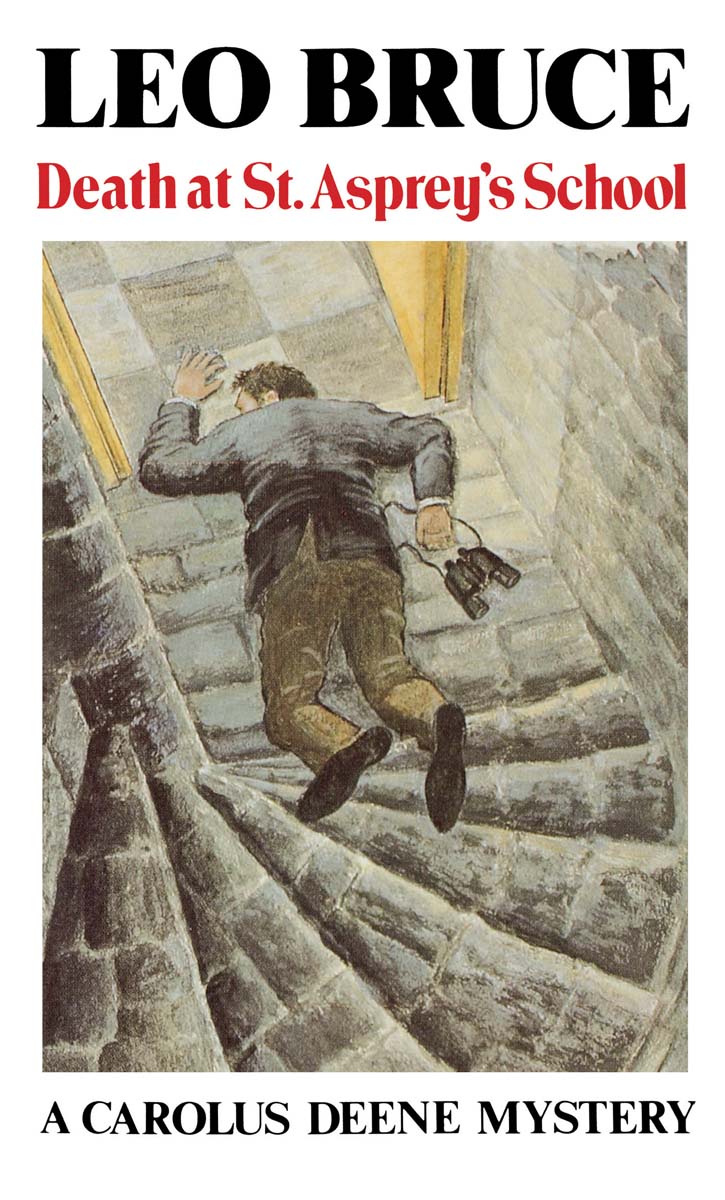 In this new Carolus Deene story, set in a boys' prep, school, it is very much a case of blackmail amongst the blackboards, of mayhem and murder, where Carolus is called in to investigate a series of spooky happenings at St. Asprey's. But the ghostly charades are only a prelude to murder, and a fight to the death for Carolus.

Written tautly, and with delightful understanding of schoolboy love and languageâand the ennui of the teachers in the suffocatingly tense atmosphere of the schoolâthis is an exciting detective story. 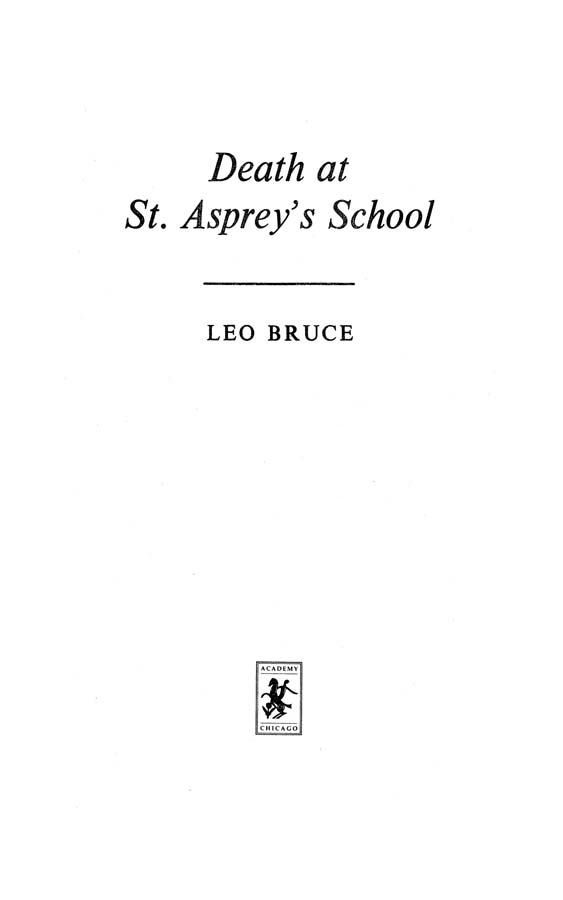 Printed and bound in the U.S.A.

No part of this book may be reproduced in any form without the express written permission of the publisher.

On an airless June night the boys in a dormitory of St. Asprey's Preparatory School were disturbed when one of them, a certain Maitland, had a violent fit of hysterics. Normally a dull if not lethargic boy, he seemed now to have entirely lost control of himself as he shrieked and pointed to the window.

One of the boys immediately ran for Matron, and a skinny woman with prominent teeth appeared, wrapped in a workmanlike dressing-gown. Slapping Maitland sharply across the face she reduced him to gloomy but less hysterical tears and the remaining boys to silence.

“Whatever's the matter with you?” she asked the snuffling Maitland, the son of a prominent ecclesiastic.

“I saw something,” said Maitland desperately.

Curiosity, a constant and lively emotion in Matron, came to the fore. There had been so many ugly and frightening events at the school lately that she was prepared for almost any revelation.

“Well, what?” she asked impatiently.

This had implications for Matron.

The dormitory was on the first floor. Matron began to hope that the boy was suffering from delusions.

“What kind of face?”

“It was a beastly sort of face,” he said.

“It's gone now,” Matron pointed out. “You'd all better get to sleep or I shall have to call Mr. Sconer.”

Just as she reached the door, Maitland shouted wildlyâ“Don't turn the lights out, Matron!”

Even the bravest warrior may realize when the odds against him are too high and Matron saw that the situation had gone beyond her authority.

“Whatever's the matter with you?” she asked, but she left the lights on while she went to call for help.

This came in the person of the headmaster's wife, a formidable woman named Muriel Sconer who, through some association of ideas among the boys, was known as Mrs. Bun. Unlike Matron who had rushed to the dormitory at the first summons, Mrs. Bun had given some moments to her appearance and approached in a magnificent
peignoir.

“What's the matter, Matron?” she asked with lofty confidence in her own ability to deal coolly with any crisis.

“It's Maitland, Mrs. Sconer,” Matron said. “He's been having a nightmare, I think. I found him quite hysterical, saying he saw a face at the window.”

“He does not want the light out,” Matron exclaimed.

“Now, boys,” called Mrs. Sconer in her rich contralto voice, “you must all go to sleep and stop all this silliness. I'm surprised at you, Maitland. I thought you were more sensible.”

“Another word from you and you'll Go To The Study tomorrow,” said Mrs. Sconer peremptorily. This produced silence, as might be anticipated, but not acquiescence in the extinguishing of lights.

“You'd better go to Matron's room and get a pill,” was Mrs. Sconer's lofty rejoinder. “Give him an aspirin,” she whispered to Matron. “You must have been dreaming. Now off to sleep, the lot of you.”

Returning to her room, however, Mrs. Sconer was far less calm than she appeared. The events of that term were enough to disturb anyone, even this monumental woman who dominated her world so arrogantly. Only a week ago there had been a scare in the Senior Dormitory when all the boys, serious youngsters of twelve and thirteen years, swore to having seen what they variously called the Monk, the Old Friar or the Abbot. Their accounts of this phenomenon tallied and could not be shaken even under the threat of Mr. Sconer's cane. A âman in grey like you saw in books' bearded, pale and tonsured, had passed through the dormitory âmumbling Latin'. A ghost? Oddly enough they did not think it was a ghost. It seemed more real. A joke? No, they said, they were sure it wasn't a joke. It remained a mystery, but what seemed certain to the adults was that someone was deliberately disturbing the life of the school with these manifestations.

But such phenomena, unpleasant as they were and
productive of anxious letters from parents, were not the worst influences over the once placid life of the school. Something hostile and corruptive was at work and everyone's nerves were on end. Tempers in the common-room were frayed and there had been a number of senseless outbreaks over trivialities. The happy and jocular relationships which had once been noticeable amongst the staff, when even Matron had been known to smile cautiously at the latest classroom anecdote, had turned to suspicion and secretiveness and Matron herself, so long believed to be a mere âsneak', a laughable bearer of news to Mrs. Sconer, had become an almost satanic figure, a centre of malignant intrigue. Everywhere was tension, anxiety, distrust as though some tragic event was impending.

The actual events which were held responsible for this might not in themselves be thought world-shaking, but they seemed to have some occult significance to the overwrought nerves of the proprietors and staff of St. Asprey's. Footsteps had been heard in the passages at night, not the patter of boys' feet, but the measured pacing of a man, yet those who had been rash enough to open their doors had seen nobody. Lights, spoken of as âlanterns' had been seen moving about the grounds when all Christian folk should have been sleeping.

When six Angora rabbits belonging to a boy called Charlesworth had been found one morning dead in their hutch, their skulls battered, it had aroused furious indignation and much sympathy for the owner, but no explanation for the crime had been found. The boys began to talk of Dracula and other creatures found in horror comics, and a stern censorship had to be exercised over Sunday letters. âDear Mother and Father, Last night we saw a gost' was no matter for laughter in a school which depended on parents' satisfaction with the education and living conditions
for which they were paying high fees, and âDear Mother and Father, On Friday all Charlesworth's rabbits were slain by a Vampire', had to be erased and a new sheet of notepaper issued to the correspondent.

At long secret conferences Mr. and Mrs. Sconer, the proprietors of the school, discussed these matters, realizing their seriousness.

“What will happen on Sports Day I daren't think,” said Mrs. Sconer. “The parents will hear the most grossly exaggerated stories. I shouldn't be surprised if we lose a dozen boys. You really must
do
something, Cosmo.”

Her husband was a gaunt muscular man, rather ineffectual she had always thought, and usually respectful of her wishes.

“I don't see what is to be done,” he said. “I've forbidden all pets after this term. We can't have them sending the creatures home now. In many cases the parents would not know how to feed them and would be most indignant at receiving a litter of guinea-pigs.”

“Then get rid of Sime,” said Mrs. Sconer.

Colin Sime was one of the assistant masters, a clever teacher according to Mr. Sconer and among the boys âthe most popular master in the school', but disliked by the staff and detested by Mrs. Sconer.

“I don't see how I can do that, my dear,” said Mr. Sconer miserably. “Unless we have evidence that he is somehow involved in all this.”

“Of course he is!” said Mrs. Sconer. “Anyone can see it. I've always told you that he's shifty and undesirable.”

“But he's an excellent teacher. He gets the boys through the Common Entrance exam.”

“There won't be any boys to be got through it very soon if things go on like this. That young man you've just taken onâ¦

“Yes. He was disgracefully rude to Matron yesterday. You will please tell him, Cosmo. Matron is quite irreplaceable, as I've told you before.”

“She's not popular with the Men,” said Mr. Sconer.

He was not voicing a wide generalization. âThe Men' were the assistant masters.

“I should think not. She's far too loyal to me for that. But I won't have that overdressed youth insulting her.”

“Mayring is a first-rate cricket coach, my dear, and Parker is getting past it.”

“Parker!” snapped Mrs. Sconer contemptuously. âJumbo' Parker was that faithful old assistant who had been at the school for twenty years and had no other home or interestâa type common to almost all English preparatory schools. Sconer said nothing when his wife brought out his name in that tone, though it was known that he depended on Parker in many ways. “The only man you've got who is at all worth his salary is Jim Stanley.”

“He's not much of a disciplinarian,” Sconer pointed out, making a notable under-statement.

“But he's a gentleman, which is more than you can say for the rest of them,” his wife told him triumphantly. “As for Simeâ¦”

Somewhat feebly Mr. Sconer pleaded urgent work. He did not want his wife's opinion on Sime, which he knew too well, to be repeated.

But in the days following the incident of âthe face at the window', the staff of St. Asprey's School, till then merely startled and worried by curious happenings, began to realize that there was something more sinister at work than a nocturnal practical joker and felt the first real pangs of fear. Once loosed in a small, fairly isolated community like this.
fear could grow and turn to terror, and this is what happened.

Its first serious manifestation came on the very next morning and was generally connected with that apparition. Young Arthur Mayring, who last term had been still at his public school, Radley or was it Uppingham? had obtained the headmaster's permission to bring back to the school a fox terrier puppy named Spike which he kept in the stables. The little creature was well-behaved and though Matron had blamed it for the presence of a flea in Stewart II's underpants, no one had ever had cause to complain that Spike was noisy or a nuisance.

Murder in the Rue Chartres by Greg Herren
Path of Bones by Steven Montano
The Chosen One by Carol Lynch Williams
Something Had to Give by Trish D.
Death of a Nurse by M. C. Beaton
Need Me by Cynthia Eden
The Lotus and the Wind by John Masters
Short Back and Sides by Peter Quinn
Sweet Dreams on Center Street by Sheila Roberts
Demons Forever (Peachville High Demons #6) by Cannon, Sarra