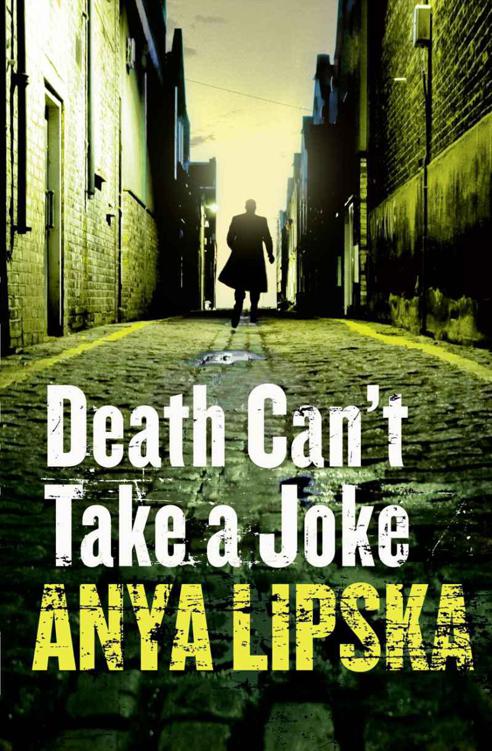 If I don’t hang on I will die. My fingers are curled into claws. So cold and numb they feel like they’re frozen to the ledge. The blackness comes … recedes again, but leaves only panic and confusion. Is this high, freezing place a mountaintop? I don’t remember climbing it. But then I can’t even recall my name right now above the wind’s howl.

Memories flicker out of the darkness like fragments caught on celluloid, briefly illuminated. A door made of plastic. A man in orange overalls. The insolent swish of something heavy through the air. Ducking – too late.

I try to brace my legs, to keep from falling. But the tremors are so bad, they’re useless. In a blinding surge of rage I vow:
Somebody’s going to die for this
. Then a great wind screams in my face and tears my fingers from their grip.

And I realise the somebody is me.

Detective Constable Natalie Kershaw sat on the outdoor terrace of Starbucks in the lee of the Canary Wharf tower, treating herself to an overpriced and underpowered cappuccino. In her chalk stripe trousers and black wool jacket she could have passed for another of the City workers getting their early morning fix of caffeine.

Kershaw was celebrating the last day of her secondment to Docklands nick: the stint in financial crime would look good on her CV, but after three months navigating the murky channels of international money laundering, she was gagging to get back to some proper police work. And not just the routine stuff – the credit card frauds, street robberies and domestic violence that had dominated her career so far.
No.
In two days’ time she’d finally become what she’d first set her sights on at the age of fourteen – a detective on Murder Squad.

Drinking the last of her coffee, she shivered. Despite the morning sun a chill hung in the air, and a light icing on her car windscreen that morning had signalled the first frost of autumn.

As she stood to go, something drew her gaze towards the glittering bulk of the tower less than twenty metres away.

Suddenly, she ducked: an instinctive reflex. The impression of something dark, flapping, the chequerboard windows of the tower flickering behind it like a reel of film. Then a colossal
whump,
followed by the sound of imploding glass and plastic. There was a split second of absolute silence before a woman at the next table started screaming, a thin high keening that bounced off the impassive facades of the high-rise office blocks surrounding the café.

Fuck!
Kershaw took off running towards the site of the impact – a long dark limo parked nearby that had probably been waiting to pick someone up. There was a metre-wide crater in its roof and the windscreen lay shattered across the bonnet like imitation diamonds. She could hear an inanely cheery jingle still playing on the radio. The car was empty, the guy she presumed to be the driver standing just a few metres away, still holding the fag he’d left the car to smoke. His stricken gaze was fixed on the man-sized dent in the car roof – the spot where his head would have been moments earlier. Kershaw filed it away as a rare case of a cigarette extending someone’s life.

Three or four metres beyond the limo, the falling man lay where he had come to rest, in a slowly spreading lake of his own blood. He’d fallen face down, his overcoat spread either side of him like the unfurled wings of an angel. By some quirk of physics or anatomy, the fall had twisted his head around by almost 180 degrees, so that his half-closed eyes appeared to be gazing up at the wall of glass and concrete, as if calculating how many floors he had fallen.

Some eight hours later, Janusz Kiszka strode up the ramp from the tube station to the street, struggling to navigate the ill-mannered torrent of returning rush hour commuters.
Did no one in London say ‘excuse me’ any more?
he grumbled to himself, before recalling that his father,
God rest his soul
, used to make pretty much the same complaint – back in eighties Gdansk. A rueful grin crept across his jaw. He’d need to be on guard against turning into a grumpy old man now that he was approaching the wrong end of his forties.

Janusz was out here on the East End’s northern fringe to meet one of his oldest friends, Jim Fulford, for an early evening jar, but he’d just picked up an apologetic message asking if they could delay their rendezvous. Which left him with a conundrum.
How the fuck was he supposed to kill a whole hour in Walthamstow?

He stood irresolute at the crossroads on Hoe Street as people flowed around him. One woman in a yellow sari holding a tiny child by the hand stared openly as she passed. Even in this, one of the capital’s motliest neighbourhoods, a man of his height and size wearing a shabby military greatcoat and smoking a cigar was an intriguing sight. Janusz caught a glimpse of one of those brown and white signs indicating a nearby attraction.
The William Morris Gallery
. Sighing, he threw down his cigar stub. An hour spent looking at Arts and Crafts furniture wasn’t exactly top of his list of things to do but there weren’t too many other options on offer.

Fifty minutes later, he was on his way to the pub where Jim and he had been meeting every couple of weeks for the last twenty years or so. The Rochester stood in a part of Walthamstow where fried chicken takeaways and Asian grocers had given way to the delicatessens and knick-knack shops beloved of the middle class. Estate agents called it the Village to distinguish it from the plebeian multiculturalism of Hoe Street – and to help justify the neighbourhood’s inflated asking prices. It occurred to Janusz that history had come full circle. In the nineteenth century, the area had indeed been a pretty village settled initially by the genteel classes, before the advent of the railway and a building boom brought a surge of humbler folk from London’s slums. He recalled with a grin that in one of Morris’s diaries on display at the museum, the avowed socialist had bemoaned the arrival of the working classes, their mean houses lapping like a mucky tide around his own family’s elegant mansion.

Janusz pushed open the door to the lounge bar of the Rochester – and experienced a sudden jolt of unfamiliarity. He scanned the bar: he was in the right pub alright, but the place had changed beyond recognition. Its patterned carpet and pool table were gone, replaced by bare floorboards, sofas in distressed leather, and tables and chairs that looked like rejects from a charity shop. The walls had been painted a dismal shade of green.

Mother of God,
thought Janusz,
they’ve turned it into a fucking gastropub.

He felt a surge of rage: sometimes it felt as if everything that had been a comforting fixture in his life for the twenty-five years or more he’d lived in London was doomed to change.

It came as a relief to see a familiar face, at least, behind the bar.

‘Brendan,’ he growled, in not-quite mock fury. ‘What the fuck have you done with our boozer?’

Brendan chuckled but Janusz caught the way his gaze flickered round the bar, as a couple of people looked up, startled by the booming voice.

Janusz looked around, too, but didn’t recognise any of the punters. The only other person at the bar was a young guy in a cardigan frowning into his laptop. His beard, which was carefully coiffed to a point, made him look like he’d just escaped from a Van Dyck painting. And when Janusz checked out his favourite spot by the fireplace, he found it taken by a well-dressed couple chatting softly over food served on what appeared to be kitchen chopping boards.

Lowering his voice, Janusz ordered two bottles of Tyskie. It was one minute to six and Jim was always on time.

‘You’ll be meeting Jimbo then?’ asked Brendan, opening the fridge.

‘Yeah,’ said Janusz. ‘He’s the only guy I know you can order a beer for who’ll turn up while it’s still cold.’

‘Ah, once a Marine always a Marine, as the man himself never tires of saying.’

‘What does he make of his local’s new look then?’ said Janusz, a sly grin creeping across his face. He was picturing the expressions on the new punters’ faces when all eighteen stone of his boisterous crew-cut mate came barrelling in.

Brendan popped the caps off the beers. ‘He’s not what you’d call entirely in sympathy with it,’ he admitted in his Dublin lilt. ‘Especially now he can’t bring that dog of his in any more.’

Janusz winced. Jim owned a gym and fitness club off Hoe Street, and although his workout regime and armfuls of tattoos made him look like a member of some neo-Nazi cell, he was in reality the gentlest man Janusz had ever known. He was besotted with his wife Marika – who he’d first laid eyes on at a Polish wedding Janusz had taken him to a decade ago – but it was the way he fussed over his collie dog, Laika, that really gave the lie to his thuggish appearance.

Brendan named the new, eye-watering price for two bottles of beer and Janusz handed over a twenty.

Fifteen minutes later, Janusz sat frowning out of the window into the gathering dusk. Jim was unerringly punctual: he liked to say that in the Marines, being ten seconds late on operations could get your knob shot off. This would be followed by his trademark laugh, which resembled the joyous woof of a large but friendly dog. For all the joking, Janusz knew that Jim’s experiences in the Falklands War had left worse scars than the shiny cicatrice that ran the length of his right arm from knuckles to armpit. Janusz had never once heard him speak of the conflict, but Marika had told him that Jim had been trapped below decks on HMS
Coventry
after it was struck by an Argentine torpedo.

Jim and Janusz had both been in their twenties when they first met while working on a building site, part of the Docklands development, back in the eighties. At the time, Janusz had his own troubles: he’d recently escaped life under Poland’s communist regime – and a disastrous marriage. Although one hailed from Plaistow and the other from Gdansk, the two men quickly found they shared a black sense of humour and a healthy contempt for faceless authority.

Janusz ran a thoughtful finger down the mist of condensation on Jim’s un-drunk bottle of Tyskie. Thinking about the past always made him melancholic. He pulled out his mobile phone and punched out a message.

Where the fuck are you?
it read.
It’s your round.

As last days at work go, this one had been seriously weird, thought DC Kershaw as she closed down her computer at Canary Wharf nick. It was gone 7 p.m. and she’d only just finished the paperwork on the roof jumper, which would make her late for her own leaving drinks.

That morning, the paramedics had reached the dead guy at the foot of the Canary Wharf tower around ten minutes after he hit the deck. It hadn’t taken them long to confirm the stark staring obvious – that the guy with his head on the wrong way round wasn’t going to make it.