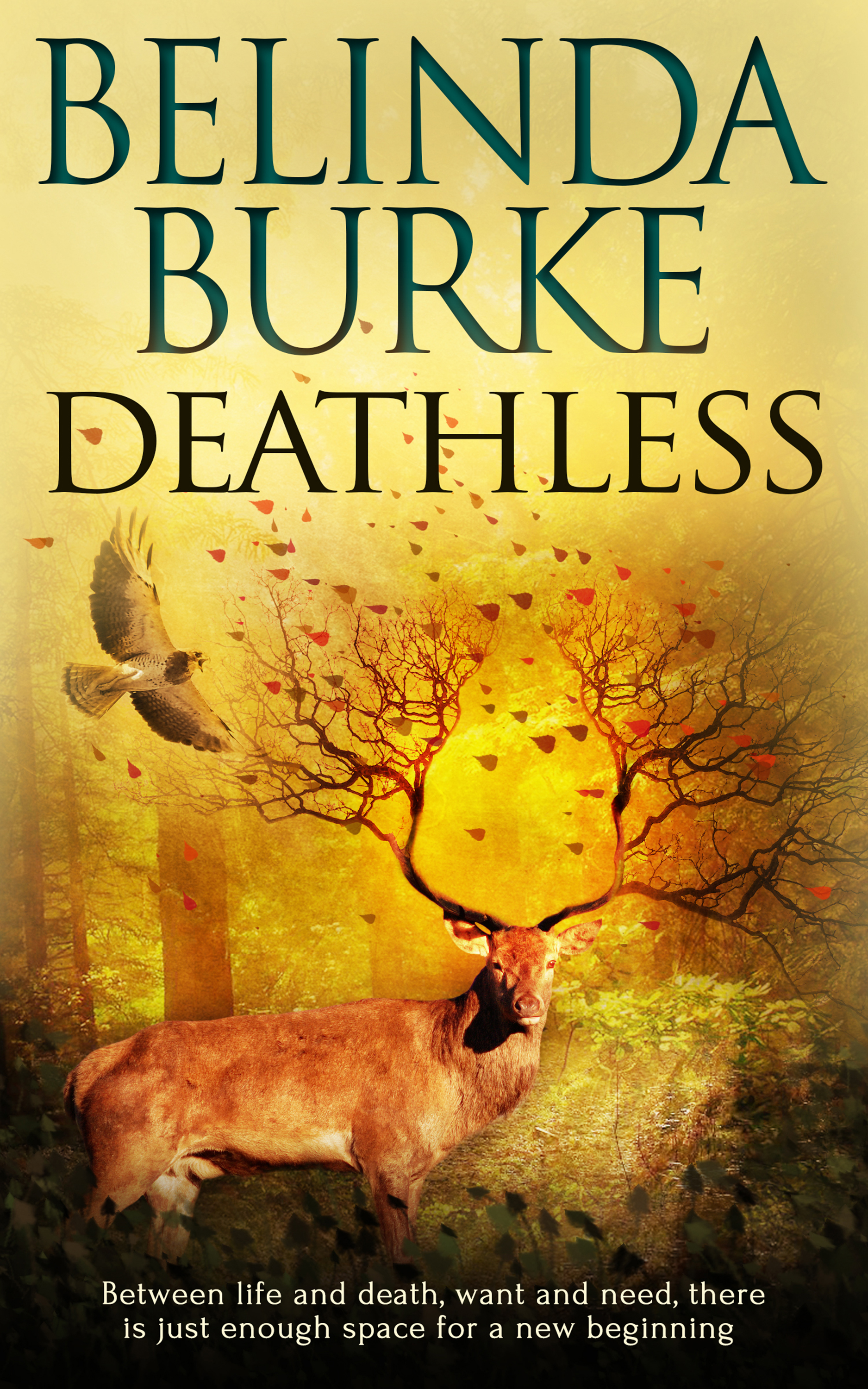 Sweeter than strawberry, darker than blackberry, better than please.

Son of the Wood God, son of a mortal woman, Myrddin has lived a carefree life for sixty years. Now, with his mother dead, the wilderness that has sustained him is an overflowing well of powers he can no longer control. Sent by his father to seek someone who can help him, the one Myrddin finds is a nameless stranger, whom he calls Kas.

Kas, so named, is still what his nature demands he be. He is Death—its essence and its king…its master, and its open gate. Since the first death that came into this world, he has been alone, essential and solitary—until Myrddin. For his sake, Kas aids in building the Rite of Spring, and in the process learns love…and loneliness.

Between life and death, want and need, there is just enough space for a new beginning. The question is how it continues—and whether it ends.

“The boundaries which divide Life from Death are at best shadowy and vague. Who shall say where the one ends, and where the other begins?”

The nights were growing chill, but the change of the autumn foliage had turned the river valley into a sea of flames. Leaves fell like sparks, browned the underbrush and bared the branches of the wood, but not only the canopy was failing. On a bier in the open, breathing slowly and quietly, Myrddin’s mother, the old chief’s daughter, lay dying.

“Oh, it’s time. It’s past time, Myrddin. Look at you, my little shoot. You don’t change any more, but you’ve grown, and your mother is old and only a woman. Now is my time.”

Myrddin gripped her fingers tightly. The lines of her face were smooth, but worn, and her hand was limp in his grasp. The only brightness left in her was in the green shimmer of her gaze. Already he could feel her slipping away.

He supposed he should be grateful it was happening now, at the end of autumn, and not when he’d already begun his winter sleep. But how could he be?
Grateful
. He could have hated it—her dying—if she didn’t look so much like she was letting go of something heavy that she’d carried for far too long.

It was still agonizing to watch.

Why did death have to come so gently? Like a fall of rain—like falling asleep after making love. Myrddin could have hated it, except that she welcomed its coming.

“You’re going where I can’t follow, Mother. I won’t have anyone if you…when you
die
.”

She laughed, or at least she made a sound that was something like it, and he winced. “You have to learn to let go. Let it be. We’re all mortal, aren’t we? Yes, all of us but you. And you…my son, if you can’t learn to let us go, you’ll have no companion but pain, and that’s…not…what I wanted for you.”

Red leaves fell onto the furs that covered her, then mingled with her hair as she tried to lift her head. One descended lightly into the spread-open fingers of her unclasped hand, and she smiled.
“
You’ll have to learn. You will, won’t you? Promise me you will.
”

Myrddin lifted his gaze. Her bearers were already waiting around them, their eyes averted from the final parting of mother and son.
“Mother.
You don’t have to do this. What good is it to just—
”

“
I want to die where it began. That’s all. For you, and for me. Won’t you come with me? I won’t make a journey in this world again.
”

He stared at her, almost shook his head, then squeezed her fingers and let go. “I’ll be watching. I can’t… I’ll just…be watching.”

She sighed, reached up and patted his cheek with her free hand, and the bearers came forward and took up her bier with careful hands. His mother’s fingers slipped out of Myrddin’s grip, and he stepped back, and back, watched her go into the forest then turned and fled up the side of the valley. The sun was setting, and the evening came full of swallowing shadows that he followed along the ridge above the crest of the valley.

He couldn’t stand it, couldn’t bear it, but he was equally incapable of avoiding it, of denying her or leaving her behind. Even at a distance, even in darkness, he could see the cortege accompanying his mother’s body, heard the wails of the tribe’s women as they fell in line behind. He wanted to go to her, stand with her, wait until the end, but he couldn’t do it. Not this.

As he thought it, the wind moved, a sudden hush of gusts that nearly blew him over. It was only then, forced out of his grief, that Myrddin felt the oncoming tide. Power was flowing around him, the green whispering. The wildlife was growing awake, aware, and the blood of his father inside him, the immortal link that connected Myrddin to the growing and greening of the world, pulsed alive.

The whisper rose through the wood until it was a roar among the leaves, a howl in the throats of wolves. The sudden baying of stags mingled with a thousand fluted melodies as the birds scattered from the trees, and the trees bowed, bent, rolled their shoulders and tossed their heads with no need for the wind.

Still, the wind
was
rising, carrying whispers and roars, howls and birds.
Awake!
Wild spirits of the spring sped past Myrddin, not focused on him, not paying him any attention, and he closed his eyes but couldn’t close his mind to the message.
Awake! He comes, He comes.

Myrddin didn’t need to wonder
who.
There was only one reason for this much excitement in the wild.
My father is coming and why? Now? When it’s too late for him to do anything
. A flush of rage replaced his grief, but it was rage tempered by truth and sense. His mother had been an offering since before he was born. That had been the reason
why
he was born. She had belonged to his father from the moment she had chosen to give herself as a gift to the God.

I was just the result, not the fulfillment. My mother, but she belongs to Father as she has always done.

There had never been any doubt about his father. His mother had been taken, and given a child, and returned…and he was that child, bound to the spring as much as to the mortal world—or more, maybe.

Immortal powers were stronger. Immortal purposes were more demanding than anything but death, and Myrddin remembered his
birth
—remembered his first year as well as yesterday.

By the end of his first summer, dressed in a loincloth of leather and painted with the brown mud of the forest, he had toddled behind the hunting men. By the end of his first autumn, he’d been strong and straight enough of limb to walk with them. He’d had the look of a boy of ten years, though he couldn’t yet count even one, but he had carried no weapon and only clung to the edges of their sight.

It hadn’t been their prey that he was after, only the wilderness that ran before their footsteps…until autumn had ended, and the first snow had begun to fall.

Snow
. Timeless and endless and white, it had fascinated him, then made him irresistibly drowsy. He’d gone to his mother and spoken his first words.

“Then sleep, dear one. Sleep…”

And then, and every year since, her lullaby had gentled him into the dark. He had slept through the winter and its whiteness, the long, cold months. Only his mother had never been surprised. Like the spring shoots, he had grown and blossomed with the passing of the seasons. She had thought it only natural that winter was time for him to sleep.

“But there won’t be anyone to sing me to sleep this year.”

The flush of anger at his father gave way to grief again, and Myrddin looked up and saw that his mother and the villagers who followed her had almost passed out of sight. He caught up quickly, with the feeling he was stepping in his father’s footsteps as he crossed the ridge line back down toward the floor of the valley.

The procession wound through the trees, bringing his mother one final time through the wood she loved. Myrddin stopped when it stopped, and stood still, arrested in place for no reason he could explain. It felt
wrong
to move forward, though he could sense his mother’s death coming for her, walking toward her. It was here, in the wood! On the path—in the clearing—right in front of him…

A silence the likes of which Myrddin had never experienced came crashing down.

He tried to take another step forward, but the air was heavy, liquid and too thick to move through. In the same instant, Myrddin saw a shadow dart from the forest with the speed of a fleeing beast, the speed of a predator following. He saw a moment in which darkness lay itself like a shroud of shadow over his mother, a shadow the shade of the forest canopy at night.

Then, color flowed into the dark. His father. The God was green, green and growing as the vivid earth, green as the forest leaves, and He was brown, as the eyes of the stag and the pelt of the stag, and His eyes were black as the rich, turned earth of spring.

The words fell heavy as stones from Myrddin’s mouth and disturbed the silence, but not the frozen moment. He took a breath and held it as his father bent and lifted his mother in his arms.

“
And now it is time for you to come with me
.” His father’s voice did not disturb anything, nor his mother’s, as it came just after.

“Is this what dying is?”

The world snapped open and shut.