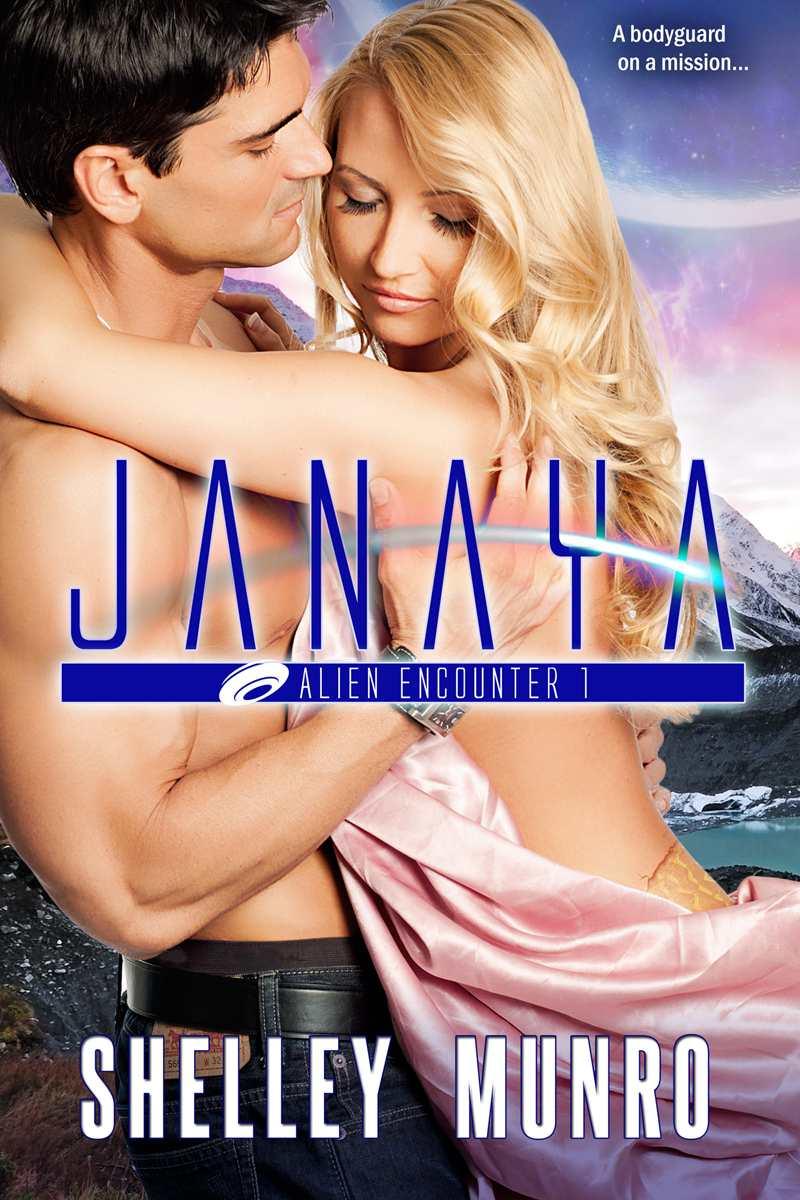 Book 1 in the Alien Encounter series.

Janaya is a bodyguard on a mission. She must protect her Aunt Hinekiri from mercenaries and return to Dalcon in time to take her captain’s exam. A simple assignment for an officer of her caliber—except nothing goes as planned. Their spaceship crash-lands on Earth. No spare parts available. Big problem.

Janaya is stuck on a tiny outpost called New Zealand. She’s going to bungle her promotion chances. And because she neglected to have her travel inoculations in her urgent hurry to protect her aunt, Janaya has bonded with an Earthman.

Police officer Luke Morgan seeks a quiet life. No press. No nosy reporters. No women. Just lots of fishing and fresh country air. He doesn’t count on meeting a pair of aliens and a talking dog, or participating in a shootout with purple-suited aliens. Nor does he expect the surge of lust he experiences for Janaya. Suddenly a routine callout turns into a huge problem that Luke suspects might only be the tip of the iceberg.

This is one of the first books I sold, and as such, it holds a special place in my heart. It was originally titled
Talking Dogs, Aliens and Purple People Eaters
, book one in the Talking Dog series. While the title has changed, the story hasn’t. It’s a fun and lighthearted romantic read about aliens crash-landing near a small New Zealand country town, and I’ve enjoyed reacquainting myself with the characters.

If you’re interested in learning more about my books and the Alien Encounter series, please visit my
website
or join my
newsletter
to receive the latest details, contest announcements and to learn when new releases are on the way.

“What?” Janaya spun around to gape at her aunt, Hinekiri. One look told her the truth. Hinekiri wasn’t teasing.

Janaya gulped and scowled out a porthole at the rapidly approaching blue planet and muttered a succinct curse, trying to halt her escalating panic. Tendrils of icy terror curled around her insides. Her worst fear come to life. “I thought you said this…this antique had plenty of life yet.” She fumbled with the harness straps and another weak curse slipped out when the ship plunged into white, fluffy clouds and sent her stomach swooping toward her toes.

“Ah, good.” Her aunt’s voice held satisfaction, despite their impending doom. “You worked your way through the Earth-speak tapes.”

Janaya stared at her aunt, speechless for an instant, before her gaze slid past the porthole once more. She swallowed and imagined shaking Hinekiri until her teeth rattled and good sense reigned. The image didn’t ease her panic.

“We’re gonna bloody crash!” Janaya shrieked. “Pay attention. What do I do? I don’t know anything about flying this bucket of bolts. I’m a bodyguard.”

“Hinekiri!” The only reason she’d boarded this ship was because fear for her aunt’s life was greater than her dislike of flying. She was beginning to regret her impulse big time.

“I said we were crashing,” her aunt said. “I don’t believe I mentioned death.”

“You… When we land, I’m going to damage you,” Janaya gritted out.

“Tsk-tsk.” Her aunt waggled her forefinger while she nonchalantly maneuvered the manual steering controls. The ship groaned in a metallic protest and, if anything, they picked up in speed. “I thought you stowed away to protect me from the bad guys.” A teasing grin flashed, lighting up her angelic face. “Not do their dirty work for them.”

“Tell. Me. What. To. Do.” They were gonna die. Janaya was sure of it. She’d never live to set foot on Dalcon again. She’d never get the captain’s promotion she was aiming for, the promotion she’d earned by sheer hard work, and Santana would find someone else.

“Harness up and let me concentrate.”

Tension seeped through Janaya’s body, finding an outlet in her white-knuckled grip, as she watched her aunt calmly prepare to crash.

“I thought you said most of the Earth’s surface is water,” she blurted, her gaze darting from the porthole on her right to her aunt and back.

“Are we going to land in water?”

Her aunt looked up from the panel of controls and frowned. “Can’t you swim?”

Janaya bit her bottom lip to keep the curse that trembled on her tongue contained. “Yes, I can swim.” The quirk of Hinekiri’s mouth gave her away, and Janaya’s shallow breaths eased out with a relieved hiss. Chances were good that her aunt was…ah yes…pulling her leg. When she stood with both feet firmly on the ground again, she’d feel more in charge. After an aggrieved glare at her aunt, she amended the thought. Maybe not.

Janaya stared at her aunt. Then with morbid fascination, her gaze drifted to the bridge view port. Instead of the water she’d expected, she saw land. Flashes of green, trees, then a sea of gold.

The initial impact jolted her body and clacked her teeth together. Behind her, something crashed to the floor—probably one of the stupid Earth-speak tapes her aunt had insisted she view and assimilate. The ship hurtled off the ground then hit again.

“Hee-haw!” her aunt shouted, one hand raised in the air, her wiry body riding the impact despite the constraints of her harness.

Janaya lacked the same exhilaration as they bounced across the ground, barely missing a large tree. The sturdy branches gouged the protective outer shell of their ship as they zipped past.

“I’ll try for up in those hills.” Her aunt jabbed at the controls, and the ship responded sluggishly before hurtling to the ground again. Trees and hills passed in front of Janaya’s horrified eyes.

What felt like hours later but was probably only a matter of minutes, they settled feet short of a dilapidated building up on the hill. The stench of metal fatigue lay heavy in the air.

“I need to stand on the ground.
Now
. Is it safe?” Nausea worked up Janaya’s throat. In a panic, clumsy fingers clawed at the restraining harness. In the end, her aunt leaned over to release the lever.

“No problems with the atmosphere here,” her aunt said. “New Zealand, according to my charts. Clean and green.”

Janaya needed no further urging. She stumbled out the hatch, dragging in huge breaths of fresh air until her lungs ached. Gradually, the panic attack subsided, leaving her shaky and embarrassed. Make that mortified. Thank the Gods her aunt had been the sole witness.

Hinekiri strode down the narrow exit steps from the ship and stopped beside her. She patted Janaya on the shoulder in a silent gesture of comfort. “Janaya, we need to camouflage the ship so the Earth people don’t stumble across it.”

“All right. I—” The small hairs at the back of her neck prickled to life. Janaya stilled, her eyes narrowing as she surveyed the area around the ship. Her hand slid toward her hip.

“Back on the ship,” she snapped to her aunt as she pulled her weapon free. “Now.”

To her right, the leaves of a fern shuddered. Janaya scented the air. Sweat. Torgon sweat.

“Come on out with your fingers poked inside your ears,” she ordered, aiming her neutralizing weapon at the dark green bushes.

“That would be, hands in the air,” her aunt said.

Janaya shrugged, not taking her eyes off the leafy plant. “Whatever. I have a weapon. Come out.”

A black face with black eyes poked into view. “Are ya gonna shoot?”

“Janaya, put the weapon down. It’s a dog. Nothing to get trigger-happy about.”

“Yeah,” the little dog said. It stepped into full view. The dog stood below knee height and had white fur peppered liberally with black spots. It trotted closer, tail wagging. “Do ya have any food?”

Janaya reholstered her neutralizer and rolled her eyes. “Talking animals?”

“I never met a humanoid who talked back,” the little dog said. “Hitched a ride with other space travelers. They stupid. Food? Do ya have any?”

Janaya glared. “The sooner we leave this blue planet the better. How long will it take for the ship repairs?”

“Months!” Janaya saw her promotion chances slipping away. Those in charge would note her absence, especially with the big top-secret mission looming. They’d declare her AWOL within five Earth days. Janaya swallowed her regrets. The protector would become the hunted.

“Parts are hard to find. Besides, I intend to sightsee while I’m here. I’m not slaving over a smoking spaceship without a little fun. And I’m not leaving Earth until I see what I came for.”

“Yeah.” Janaya sighed, having heard the refrain all the way to Earth. No matter how logical Janaya’s arguments Hinekiri never wavered from her goal. “The migration of the wildebeest.”

“I didn’t ask you to come. It was your idea to stow away.”

“The Torgon want your galaxy exploration charts and your journals. And once they get them, they won’t care if you’re dead or alive. They’ve put out a mercenary contract on you.”

“Contract, somtract. They’ve got to catch me first.”

Janaya scented in the direction the dog indicated. She felt a curious swooping pull that zapped all the way to her clit. Excitement sparked within. Her heart thudded and she shifted, uneasy with the sensation and the way her new Earth clothes—courtesy of Hinekiri—clung to her breasts.

A steady, buzzing drone filled the air. Janaya frowned, every instinct hyperaware at the new threat of danger. A clean scent drifted to her on the breeze, one that reminded her of the mountains and spruce forests of Dalcon. Then her eyes focused on a small dot on the horizon at the bottom of the hill. The dark blue dot grew steadily larger, her apprehension growing in direct proportion.

Hunger ate at Luke Morgan’s insides. He pictured the medium-done steak he’d left on the kitchen table. One bite less in size than when he’d taken if off the grill. Luke squinted through the late-afternoon light, wishing he were back in his kitchen raising the second bite to his mouth.

Mrs. Bates had been at the vicar’s homemade wine again. He knew it. His second-in-charge knew it. But he still had to check it out. Sometimes it plain sucked being a cop. The grumbling protest of his stomach provided a great punctuation mark for the thought.

His radio blasted into sudden life. “Have you sighted the UFO yet?” Eager anticipation colored his receptionist’s voice.

“No,” he muttered. “Mrs. Bates said the North Ridge, right?” Luke figured he’d better follow procedure and do this thing right even if the sighting was wine-induced and a figment of Mrs. Bates’ fevered imagination.

The rutted track disappeared. Native totara, karaka and manuka covered the hilltop and a narrow path edged the trees before ending at the clearing on the summit. Luke sighed, knowing he was going to have to hoof it. He coasted his Land Cruiser to a halt and yanked on the park brake.

Janaya squinted through the sunlight at the tall figure who climbed from the vehicle and tried to ignore the spark of anticipation. Totally weird. Phrull it, she couldn’t wait to leave this god-forsaken outpost. Had to be a twenty-four-hour bug. Her body ached all over. “What are we going to do? We haven’t had time to hide the ship.”

“I hope he has food,” the little dog said, cocking its head to survey the approaching man.

“Is that all you can talk about?” Janaya demanded, eyeing the creature with disfavor. “Aunt?”

Unbidden, her gaze slipped back to the male. He was tall, and even from this distance she knew he would tower over her medium frame. Dark brown hair, tousled and untamed, touched on his collar.

Janaya sucked in a deep breath. The same clean scent she’d smelled before bubbled through her senses like a sparkling tonic.