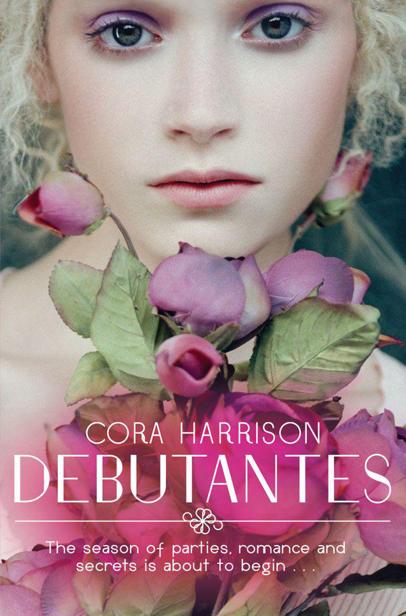 For my friend Patricia Lyons of Tara Book Club with thanks for all her help, advice and encouragement throughout my years as a writer.

The camera clicked and clicked again.

‘Keep still!’ said the director’s voice. ‘Good! Now breathe in and smile – no, not like that. Think of something. Think of a line of poetry.’

‘Don’t forget,’ said the director as a look of boredom began to show in the lovely eyes, ‘once this film gets shown in a cinema you will have offers from Hollywood. Think of the money! There will definitely be enough for you to have a London season, to be a debutante and be presented in court. Think of shopping in Harrods!’

An expression as of one who sees heavenly visions came across the girl’s beautiful face. Suddenly it lit up, as she imagined the gorgeous ball gowns, magnificent jewels and well-cut riding clothes that could be bought with Hollywood money. The camera whirred as she moved her head, her eyes full of a burning ambition.

‘You can come out now, Violet.’ Sixteen-year-old Daisy Derrington lifted her head from the camera and looked across to the beech hedge which framed the face of her elder sister, Violet.

‘I’ve got all sorts of creepy-crawlies in my hair,’ complained Violet as she slid out from under the branches. Standing there, even in worn, darned riding breeches and an old short-sleeved shirt, she looked marvellous, thought Daisy. Violet had always been pretty, but now, at almost eighteen, she was annoyingly beautiful.

‘Don’t make a noise,’ Daisy said. ‘I want to film the horses while they’re still grazing peacefully.’ She picked up her small box-shaped camera and began to move towards the next field. ‘That’s what you are supposed to be looking at. I’m going to do that now until Poppy comes out with the horse food. When I finish filming the peaceful grazing scene, I want to film them galloping. Will you go and help Poppy, Vi?’

The Derrington family consisted of father, great-aunt and four girls. Violet was the eldest. One glance at those beautiful violet-blue eyes had been enough to give her the name of Violet. That had been understandable, thought Daisy. However, her mother (a woman of few ideas, obviously) had then gone ahead to give flower names to the next three girls. Poppy – well, it was obvious from the start that she had inherited her mother’s flame-coloured hair, so her name was appropriate too, and Rose, the youngest, had been a sweetly pretty baby with a wild-rose complexion, according to everyone.

But Daisy, Poppy’s twin, disliked her name intensely. Coupled with her appearance – slightly chubby, with cornflower-blue eyes and pale blonde hair – there was something childish and stupid about the name ‘Daisy’, and as far as she was concerned, it was hardly an appropriate name for a famous film-maker, which was what she intended to be.

The Derringtons lived in Beech Grove Manor – a tall, three-storey house made from honey-coloured sandstone and set amid magnificent beech woods in west Kent. The house had been built almost two hundred years previously with a stately dining room, drawing room, library and study on the ground floor and a dozen bedrooms, a picture gallery and a ballroom on the two upper floors. It had been a wonderful place to live in when there had been money to pay enough servants to keep it warm, well-cleaned and comfortable, money to do the repairs and money to renew the furniture when necessary. Unfortunately, the family fortune had lessened over the years and the present earl had made some disastrous investments, including sinking a large part of his fortune in a hugely disappointing gold mine out in India. By the early 1920s there were only half the servants needed for comfort and the furniture, carpets and curtains all needed renewing and repairing. There was no money for anything. No money to send the girls to school or even to afford the cheapest governess for them, no money for new clothes, no money for enough coal to heat the huge house properly, and certainly not enough money for Violet to become a debutante and be presented at court to the King and Queen, in the same way as other girls from the families that they knew.

Daisy kicked a pile of leaves in exasperation. Everything was so frustrating, she thought. The Derrington family was so poor, the four girls were supposed to ask for nothing, demand nothing, achieve nothing, and eventually marry someone rich and most likely boring. But they all wanted more than that. Poppy wanted to be a professional jazz player and singer, she herself wanted to be a film director and Rose wanted to be an author. Violet, however, was determined to find a rich husband and believed that if she made a good match, married a man with money – well, perhaps that would be the way out for her younger sisters. But to make the match she had to meet the men, and virtually the only way to do that was to have a season. Daisy, however, believed that the key to the future for herself and her sisters lay in the small box camera, complete with an enlarger, a positive film printer, a copier and a projector, all of which had been presented to her by her godfather, Sir Guy Beresford, a wealthy businessman with interests in the film industry. The moment Daisy had seen what Violet looked like on camera she had suddenly become fiercely ambitious to direct and shoot a film which could be sold to earn them some money which would be spent on a season for Violet. Violet was (she had to admit) unusually good-looking in real life, but when shown on film, she became something else. A real film star!

We all have ambitions, thought Daisy, and our first ambition is to get out of Beech Grove Manor.

Daisy was busy with her film when the gong went for lunch. She pulled her head out of the dark cupboard in the dressing room off the bedroom she shared with her twin sister and clattered down the uncarpeted stairs, colliding with Poppy, who was running in through the back door, her long red hair, freed from its usual thick braid, tumbling around her shoulders.

‘Great-Aunt Lizzie will have a fit if she sees your hair like that,’ hissed Daisy.

‘Oh, pish!’ Poppy gave herself an indifferent glance in the hall looking glass.

‘We must be the only girls in England who haven’t cut our hair,’ said Daisy discontentedly, conscious from the glass that her own hair was not too tidy either.

‘You cut your hair,’ pointed out Poppy.

‘Only a quarter of an inch at a time,’ said Daisy. ‘First thing in the morning I just slice through a curl at the end of each strand. I think if I do that every day Father won’t notice, and then after a year or so I’ll have a fashionable bob.’

‘He’s just totally unreasonable,’ said Poppy with a puzzled frown. ‘I can’t see what difference it makes to him.’

And she didn’t, thought Daisy with amusement. That was one of the things you had to accept about Poppy: she was totally incapable of looking at things from anyone else’s point of view. She couldn’t see that their father’s strict Victorian upbringing made him shudder with horror at the antics of the girls in London, with their short hair and their short skirts. She couldn’t see that it was better to coax him rather than to quarrel with him.

Of the four sisters, Daisy was by far the most accomplished at bringing their father round to her point of view. Michael Derrington was rather a difficult man. After his wife’s death in 1916 he had gone to war to fight in the trenches at the Somme, leaving his four young daughters in the care of his wife’s aunt. He had been severely shell-shocked during the war and returned to Beech Grove Manor physically well, but suffering from depression and severe headaches. You had to be gentle with him, thought Daisy.

‘One of these days,’ said Poppy darkly, ‘I’ll just take the scissors to my hair. Perhaps I should do it now – make lunch more interesting, wouldn’t it? Just imagine Great-Aunt Lizzie’s face if I arrived with a neat bob!’

‘Except that it wouldn’t be a neat bob.’ Daisy thought she should put a stop to that idea. Once Poppy took up a notion she never thought of the consequences. ‘Nothing looks worse than a bob that’s not properly done. You’d have to go to a hairdresser and that costs money. Come on, Poppy,’ she hissed, ‘let’s go in or we’ll be late.’

Gift of the Unmage by Alma Alexander
Scout's Progress by Sharon Lee, Steve Miller
The Beggar and the Hare by Tuomas Kyrö
The Busted Thumb Horse Ranch by Paul Bagdon
The Story of Jennie- or the Abandoned by Paul Gallico
The Second Empire by Paul Kearney
Rachel Haimowitz & Cat Grant - [Power Play 1] by Power Play Resistance
The Dirty Show by Selena Kitt
Red Skye at Night by Ashe Barker
BENEATH - A Novel by Jeremy Robinson