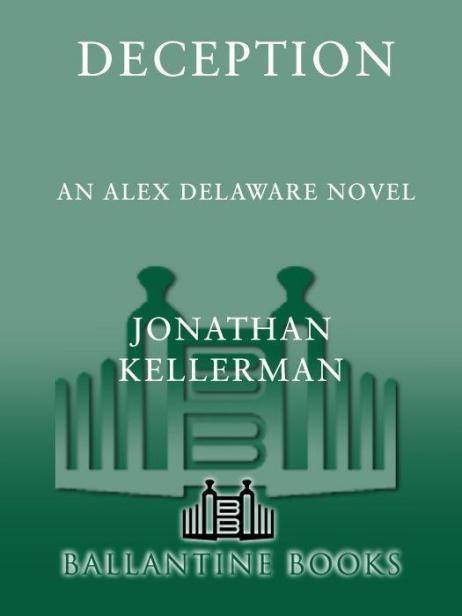 FOR CHILDREN, WRITTEN AND ILLUSTRATED 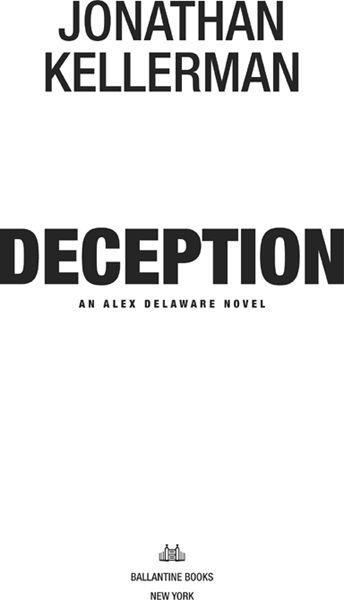 The woman had haunted eyes.

Pale, drooping at the outer edges, they stared into the unseen camera with an odd combination of defiance and defeat.

She didn't move. Neither did the camera. The wall behind her was brown-blue, the color of an old bruise. The couch on which she perched was gray. She was a pretty woman, made less so by fear. Her shoulders were bunched high, her neck tendons taut as bridge cables. A black, sleeveless dress showcased soft white arms. Too-blond hair fell limply to her shoulders.

Moments passed. Nothing happened. In another situation I might've cracked wise about it being one of Andy Warhol's old anti-films: interminable, static studies of the Empire State Building, a man sleeping.

When a homicide lieutenant brings you something to watch, you keep your mouth shut.

Milo stood behind me. His black hair and raincoat were rumpled. The coat was cheap, green, wrinkled past the point of salvation. It gave off a not unpleasant vegetative odor. He'd placed a massive breakfast burrito in a take-out box on my desk, hadn't touched it.

When he drops in, he usually beelines for the fridge, empties a quart of something, raids the shelves for bad carbs. This morning, he'd marched to my office, loaded the DVD with a flourish.

Blanche, my little French bulldog, sat next to me, uncharacteristically serious. She'd tried her usual smile, had figured out something was different when Milo didn't stoop to pet her.

I rubbed her knobby head. She looked up at me, returned her attention to the monitor.

More silence on the screen.

The woman said, "My name is Elise Freeman. I'm a teacher and tutor at Windsor Preparatory Academy in Brentwood." Her voice was throaty. She knotted her fingers, flopped them onto her lap. "I'm making this recording to document sustained abuse I have received at the hands of faculty members at Windsor Preparatory Academy in Brentwood. Which I will hereon refer to as Prep."

Deep breath. "For the past two years at Prep, I have been subjected to repeated, unwarranted, aggressive, and distressing sexual harassment from three individuals. Their names are." Her right hand rose. A finger pointed upward. "Enrico Hauer. H-A-U-E-R." Two fingers: "James Winterthorn." More slow, enunciated spelling, then a trio of digits. "Pat Skaggs."

The hand dropped. "For the past two years Enrico Hauer, James Winterthorn, and Pat Skaggs have made my life a living hell by engaging in brutal, unsolicited, and threatening sexual behavior. I am making this recording so that in the event something violent happens to me, the authorities will know where to look. I do not know what else to do as I feel trapped and frightened and have nowhere to turn. I hope this recording never needs to come to light but if it does, I am glad that I made it."

Her eyes clenched shut. Her lips moved soundlessly and she slumped. Suddenly her jaw jutted and she was sitting up straight. More defiance than defeat.

Staring hard at the camera. "Thanks for listening."

I said, "But you're here. She was murdered?"

"Backlog at the coroner?"

His laughter was harsh. "Nope, this morning I'm Mr. Literal. Ice of the dry sort. Frozen CO
2
. She was found in her home, lying in a bathtub full of the stuff."

I tried to picture the blond woman as a frozen corpse, didn't like the image that flashed in my head, and reverted to Doctor Helpful. "Someone trying to mess up the time-of-death estimate? Or maybe a psychopath coming up with a new way to showcase his handiwork."

He winced, as if all contingencies were painful. Removing the disc, he slipped it back into a clear plastic jewel box. Not bothering to glove up; the DVD had already been printed, matched only to Elise Freeman.

I said, "Where are you going with this?"

He rotated his neck. "Got coffee? Maybe some toast?"

We left my house with black coffee in travel-cups and six slices of lavishly buttered sesame-rye.

When Milo wants to think, phone, text, or sleep he sometimes asks me to do the driving. It's against LAPD regs but so are lots of things. He makes up for my mileage cost with bar tabs and such.

The toast was occupying his attention so I offered to take my Seville. He shook his head, scattering crumbs, continued to his latest unmarked, a bronze Chevy Malibu with a phlegmy ignition. Heading north on Beverly Glen, he steered with one hand, stuffed rye bread into his mouth with the other.

The police radio was switched off. The burrito rested in the backseat and filled the car with
eau de frijole.

He said, "In answer to your question, too messy."

"That was low on my list of questions. Where are we going?"

"Where she died, Studio City."

"Not an official homicide but I'm on it."

The difference between an experienced psychologist and a novice is knowing when not to speak.

I sat back and drank coffee.

Milo said, "Maybe there'll be a microwave and I can heat up the burrito."

Elise Freeman had resided in a green-sided, tar-roofed bungalow on a spidery, tree-shaded lane east of Laurel Canyon and north of Ventura Boulevard. Close enough to the thoroughfare to hear Valley traffic, but mature vegetation and larger houses blocked any urban visuals.

The little green box sat at the terminus of a long dirt driveway split by a strip of concrete. A gray sedan was parked near the front door. Full-sized car but not big enough to hide the bungalow's blemishes as we drew close: worn and ragged siding eroded to raw wood in patches, curling shingles, a noticeable listing to the right due to a sinking foundation.

No crime scene tape that I could see, no uniforms on watch.

"Last night by her boyfriend. He says he talked to her on the phone three days ago but after that, she stopped returning his calls. A forty-eight-hour time frame fits the coroner's TOD guesstimate. Probably at the tail end--early morning. Apparently, dry ice doesn't melt, it sublimates--goes straight into the atmosphere--so there's no water residue for estimating degradation. In an ice chest, the rate of sublimation is five to ten pounds every twenty-four hours, but it's faster under normal room temperature."

"Any empty ice bags left behind?"

Someone had cleaned up.

He scowled. "I never got a chance to see the scene because my involvement began at five thirty a.m. today when Deputy Chief Weinberg woke me from a rare good dream. The DVD, the key to the house, and what's passing for a file were messengered to my house ten minutes later."

"High intrigue and an egregious break in procedure," I said. "Sounds like orders from on high."

He continued slowly up the drive, checking out the surroundings. Layers of greenery to the left, a two-story Colonial mansion to the right. The big house was wood-sided like the bungalow, but what I could see of it was painted white and adorned with black shutters. It sat on a generous lot partitioned from Freeman's skimpy ribbon of real estate by a ten-foot stucco fence topped with used brick. Bougainvillea topped areas of brick, amping up the privacy quotient on both sides.

The smaller structure might've begun life as an outbuilding of the manse, back when multi-acre estates spread across Valley hillsides. A guesthouse, servant's quarters, maybe tack storage for one of the cowboy actors wanting proximity to the Burbank film-lots that passed for Wild West badlands.

Milo rolled to a stop inches from the Crown Vic. No one at the wheel, but a man in a cream-colored suit emerged from behind the bungalow.

A hair over Milo's six three, he was broad, black, bespectacled. The suit was double-breasted and tailored to nearly conceal a gun bulge.

He gave a cursory nod. "Milo."

"That makes it sound like I'm in therapy, Stan."

"Therapy's in fashion now, Milo. The department looks kindly on self-awareness and insight."

"Must have missed that memo."

Milo said, "What brings you down from Olympus, Stan?"

"More like Bunker Hill," said Creighton. "I'm here to keep an eye out."

Creighton said, "One does what one is told." He turned to me. "Speaking of which, Doctor, I appreciate what you do but you shouldn't be here."

Creighton frowned. Cool morning but the back of his neck was moist ebony. "I must've missed
that
memo."

"Probably buried under a pile of wisdom from His Munificence."

Creighton flashed beautiful teeth. "Why don't you call him that to his face? Doctor, you really need to absent yourself."

Creighton's smile degraded to something cold and menacing. "You're telling me you got papal dispensation for his presence at this specific crime scene?"

"Why would I improvise about that, Stan?"

"Why indeed," said Creighton. "Except for the fact that rationality doesn't always figure into human behavior. Which is why my wife, who has an M.D., still smokes a pack and a half a day."

"Feel free to call the Vatican to verify, Stan."

Creighton studied me. "Can I assume that Lieutenant Sturgis has informed you of the need for exceptional discretion here, Doctor?"

Out of Oz: The Final Volume in the Wicked Years by Gregory Maguire
Posey (Low #1.5) by Mary Elizabeth
Daughters of the Dragon: A Comfort Woman's Story by William Andrews
The Rightful Heir by Angel Moore
The Omicron Legion by Jon Land
The Lost Girl by Sangu Mandanna
Adam's Thorn by Angela Verdenius
Ride the Titanic! by Paul Lally
Touch of Desire by Lia Davis
Catwatching by Desmond Morris