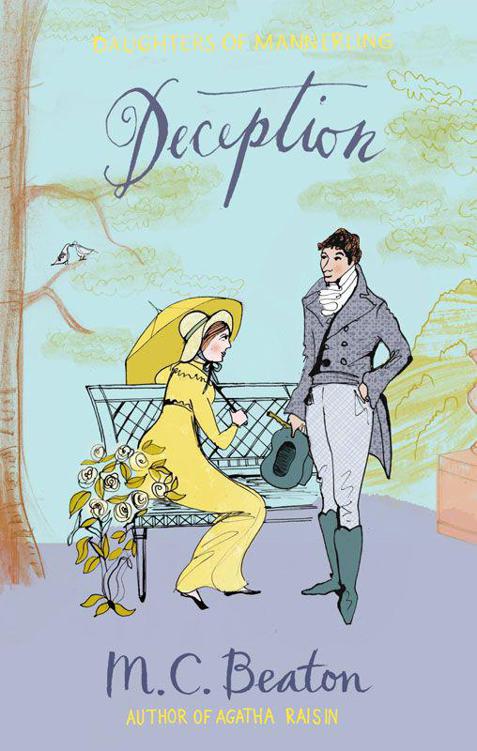 The Daughters of Mannerling Series (in order)

This edition first published in the UK by Canvas,
an imprint of Constable & Robinson Ltd, 2014

The right of M. C. Beaton to be identified as the author of this work has been asserted by her in accordance with the Copyright, Designs and Patents Act 1988.

This series is dedicated to Rosemary Barradell, with love

The Beverley twins were very alike in appearance, but Rachel was softer in nature than Abigail. Sometimes Abigail thought she was made of steel compared to her sisters. Jessica had proved to be a squeamish weakling. Mannerling was what mattered.

The six Beverley sisters and their parents had lost their home, Mannerling, due to Sir William Beverley’s debts. They had moved to modest Brookfield House some miles away. The two elder girls, Isabella and Jessica, who, Abigail believed, had almost had Mannerling in their grasp through marriage, had thrown away all for love. Jessica had actually been engaged to the son of the present owners, Mr and Mrs Devers, but had turned him down because, she said, he had assaulted her. In all her virginal innocence, Abigail believed that all Harry Devers had done was to kiss her sister too warmly, not knowing he had nearly raped her. Such matters were not discussed in a genteel home. The youngest, Lizzie, knew something really dreadful had happened, but time had moved on and gradually the myth that Jessica had behaved too
missishly
became more and more to be believed by Abigail and her twin, Rachel, who was often easily swayed by her.

There was no doubt that Mannerling exerted a powerful influence over all who lived there. It was a well-known fact that Harry Devers wanted the place for himself, and if he married would expect his parents to live elsewhere. It was admittedly a graceful mansion with two wings springing out from a central block and a porticoed entrance. The double staircase and the painted ceiling were accounted to be among the finest in the country.

After Jessica’s wedding to ‘a mere professor,’ Abigail found that she was once more possessed by all the longing for her old home.

‘I would not have behaved like Jessica,’ she said to Rachel for what seemed to her twin like the umpteenth time. Rachel looked at her doubtfully. The twins were dressed alike in simple muslin gowns, both had fair hair and large blue eyes, but Abigail’s eyes always gazed out at the world with confident certainty while Rachel’s held a bewildered innocence. ‘I have just learned Harry Devers is due home on leave quite soon,’ she added.

‘How did you come by such intelligence?’ asked Rachel curiously. ‘Miss Trumble would never tell us even if she knew.’ Miss Trumble was their governess.

‘Mary Stoddart – I mean, Mary Judd. She said it to taunt me.’

Mary Stoddart was the vicar’s daughter, who had been temporarily mistress of Mannerling when she had married one of the owners, a Mr Judd. She was now a widow, her husband having hanged himself when he realized he was about to lose Mannerling because of his gambling debts. Debt had also been the curse of the girls’ father, Sir William, who had died of typhoid not long after gambling away their home.

‘Harry Devers will not come near us, nor will his parents let him.’

‘But surely we could contrive a way to come across him,’ said Abigail. ‘He will go out riding, and perhaps we could be walking past at the time.’

From her window upstairs, Miss Trumble looked down and saw the twins walking in the garden. She was struck afresh every time she saw them at how alike they looked. She had suggested that they might choose different gowns and different colours, but the twins were inseparable and preferred to dress alike. They were both remarkably pretty, thought Miss Trumble, and should be going to balls and parties.

She frowned. Lady Beverley was miserly and kept complaining that there was not enough money to take them about. But the governess had learned from Barry Wort, the odd man, to whom Isabella, the eldest, frequently wrote, that Isabella’s husband, Lord Fitzpatrick, sent sums of money, as did Jessica’s husband, Professor Sommerville. She made her way downstairs with a warm shawl wrapped about her shoulders against the autumn chill, wondering how it was that neither of the twins ever appeared to feel the cold, even dressed as they were that morning in filmy muslin. She had suspended their lessons because Lizzie, the youngest, was ill with a bad cold, and her elder sisters were becoming increasingly rebellious at the idea of lessons in the schoolroom. The twins were aged nineteen, the next in line, Belinda, was eighteen, and Lizzie was seventeen.

As she walked out into the garden, the twins saw her and hurried away. She stood frowning, watching them go, wondering if they were plotting anything. She was constantly worried that what she privately dubbed as ‘the Mannerling madness’ would surface in one of them again. Surely not. With Mr and Mrs Devers still the owners of Mannerling and with their son having shown himself to be a lecher and a lout, there could surely be no danger any more.

She went round the back of the house to find Barry, the odd man, whom she often used as a confidant, thinking him the most sensible member of the household.

Barry was feeding the hens, who clucked around his feet. He was a square, stocky man, a former soldier, of a placid disposition. Miss Trumble hailed him and Barry looked up with a smile as she came across the garden towards him.

He wondered again about the mystery that surrounded Miss Trumble. She was old, in her sixties, with a wrinkled face and fine brown eyes. But she moved with grace and had a certain aristocratic air. She never discussed her previous employers, talked about her family, or explained how it was that she always seemed to have a comfortable amount of money which did not, thought Barry, come from her wages which, he knew, Lady Beverley often ‘forgot’ to pay.

‘I saw the twins walking in the garden,’ said Miss Trumble, ‘and went to join them but they scurried off. I hope they are not plotting anything. Probably they were frightened that I would drag them up to the schoolroom for more lessons.’

Barry put the now empty wooden bowl which had contained the food for the hens down on the ground. ‘I hear Harry Devers is due home on leave soon.’

‘Oh, no! Make sure the girls do not learn of that! But even if they did, surely they cannot still harbour ambitions in that direction. The man is dangerous!’

‘Perhaps they do not know that, miss.’

‘No, virginity makes all seem innocent.’

Barry wondered what had happened in Miss Trumble’s life to remove her innocence.

‘But to get to my immediate problem,’ said the governess. ‘How do I get Lady Beverley to loosen the purse-strings so that my girls can have new gowns and go to balls and assemblies?’

‘I cannot think, miss. Reckon my lady will claim poverty as usual.’

‘There is a grand ball in the offing at Lady Evans’s, you know, at Hursley Park on the other side of Hedgefield. The invitations have not yet been sent out. I would like to secure invitations for the girls. How are they going to find husbands kept mewed up here? I feel sure if I spoke to Lady Evans, she would oblige me.’

‘Beg pardon, miss, but why would such a grand lady as Lady Evans feel she had to oblige a governess?’

‘I think she is probably good-hearted and not at all high in the instep,’ said Miss Trumble, turning away.

She went into the house by the kitchen door. Josiah, the one-legged cook, was scowling furiously at some old, yellowed bits of parchment.

His face cleared when he saw Miss Trumble. ‘My reading don’t be what it should be,’ said the cook.

‘Here is a recipe for Batalia pie. Would you be so good as to read it out for me? I have a good memory and once I hear something, I never forget it.’

Miss Trumble picked up a piece of parchment and studied the old-fashioned writing. It said:

Take four tame Pigeons and Truss them to bake, and take four Ox Pallets well boyled and blaunched, and cut it in little peeces, take six Lamb-stones, and as many good sweet Breads of Veale cut in halfs and parboyld, and twenty Cockscombs boyled and blanched and the bottoms of four Artichokes, and a Pint of Oysters parboyld and bearded, and the Marrow of three bones, so season all with Mace, Nutmeg, and Salt, so put your meat in a fine Coffin of fine Past proportionable to your quantity of meat, put half a pound of Butter upon your meat, put a little water in the Pye, before it be set in the Oven, let it stand in the Oven an hour and a half, then take it out, pour out the butter at the top of the Pye, and put it in a leer of Gravy, Butter, and Lemons and serve it up.

‘I’d best leave them out. The pigeons are our own, but I don’t reckon my lady will allow me to buy kidneys.’

Miss Trumble fished in her reticule and pulled out some silver. ‘Here, Josiah, buy your kidneys and take the horse into Hedgefield.’

‘My lady won’t like a servant using the horse.’

‘She will not know the purpose. I shall merely say I told you to exercise the animal.’

Miss Trumble sat down at the scrubbed kitchen table after the cook had left to go on his errand. The kitchen was warm and scented by the bunches of dried herbs hanging from the ceiling and from the smell of biscuits, recently baked in the brick-built oven. Miss Trumble loved to watch Josiah bake. He would bake the bread first, when the oven was hottest, then small bread, buns, cakes, and biscuits. In the last of the heat, when all the baking was finished, feathers and down for pillows were dried and fluffed, and rose petals and herbs dried for pot-pourri and the store cupboard. It took great experience and intuition to regulate the heat.

Miss Trumble knew that it was not very ladylike in her to favour the kitchen over all other rooms in the house, and yet there was a simple reason for her liking – it was the only warm room in the house.

That thought made her cudgel her brains about how to deal with Lady Beverley’s parsimony. Then her face cleared. She had hit on a plan. Hitching her stole about her shoulders with an unconscious grace, she went to the parlour, where she knew she would find Lady Beverley brooding over the household accounts.