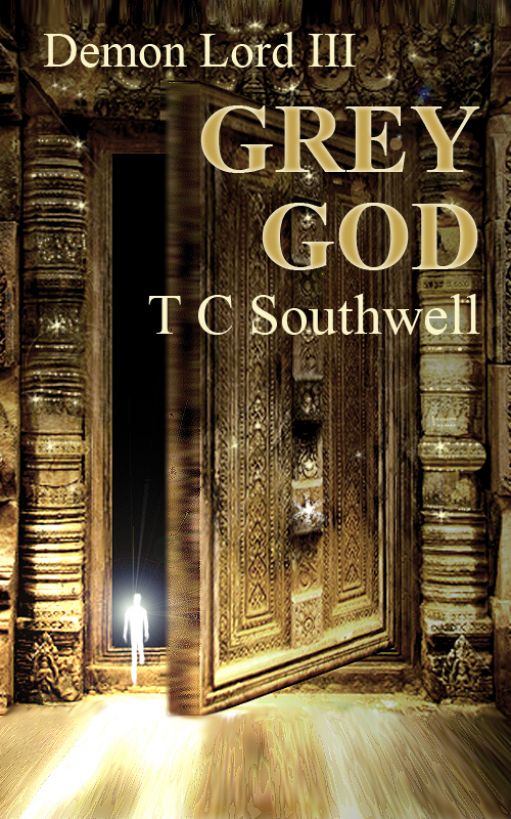 This e-book is
licensed for your personal enjoyment only. This e-book may not be
re-sold or given away to other people. If you would like to share
this book with another person, please purchase an additional copy
for each recipient. If you’re reading this book and did not
purchase it, or it was not purchased for your use only, then please
return to Smashwords.com and purchase your own copy. Thank you for
respecting the hard work of this author.

Chapter
One
– The Wedding

Bane gazed
across the sunny vale with a smile. The wedding preparations were
at last complete. Days of planning and toil by many industrious
people had culminated in a setting they perceived to befit his
marriage. Or at least, Mirra's perception of it. She had chosen the
location in this remote vale surrounded by wild forest. A swathe of
emerald grass stretched away to a distant lake in the bosom of
rolling hills.

A herd of deer
grazed in the meadow, some with garlands around their necks or
entwined in their antlers, decorations young healers had pressed
upon them. Several aged horses grazed amongst them, which the
healers took in when they grew too old for hard work, saving them
from the butcher's axe to pull light carts. He glanced to his
right, where an archway of intertwined red and white erros blooms
awaited his presence beneath it, planted months ago when Mirra had
chosen this place. A profusion of butterflies filled the air, and
birdsong wafted from the trees.

Young healers
ran giggling across the flower-dotted grass, bedecked with garlands
like the deer, and sweet scents wafted on gentle breezes. The
balmy, magical day was a gift, he guessed, from the goddess. He
turned at the sound of footfalls to find Grem and his father
approaching, looking smart but a little uncomfortable in their new
finery. They wore white silk shirts, dark brown tunics laced with
gold, matching trousers, and black boots. When he reached Bane,
Mithran cast a measuring glance over his son and tugged at Bane's
collar.

Bane glanced
down at his dark blue tunic, laced with gold like his father's and
worn over a white satin shirt. Flame-like designs picked out in
gold thread ornamented the collar and cuffs, and a pair of
impeccably cut trousers completed his ensemble. Mithran looked
around as a hush fell. The young healers ceased their play to run
towards the white tent that had been set up at the edge of the
meadow, where Jassid stood beckoning to them.

"Looks like
this is it," Grem said, shooting Bane a grin.

Bane sighed.
"Humans have such strange ceremonies. All this fuss and bother,
when all I have to do is speak the words that bind us."

"Well usually
we need a priest for that, and they're here as witnesses."

"You and Grem
would be witnesses enough, even if my word was not."

"True. This is
mostly for Mirra's sake, I suppose."

Mithran
chuckled and headed towards the floral archway. Bane followed with
Grem at his side. The healers formed up into lines on either side
of the route from the tent to the archway, each armed with a basket
of petals. They glanced at him shyly as he passed, and some cast
him timid smiles. Almost two years had passed since he had cast
Arkonen back into the Underworld and recreated the wards he had
broken to free the dark god, yet his bloody rampage across the
Overworld remained fresh in the minds of many. Only a few people
had been invited to his wedding, most of them Mirra's friends from
her old abbey. Grem and Mithran were Bane's only guests. The
healers expected a special guest to attend, however, and that had
caused much unhappiness amongst uninvited Elder Mothers.

They arrived
at the archway, and Mithran turned to survey Bane again, tugging
and straightening his tunic.

"I wish your
mother was here," he muttered. "She'd be so proud."

Bane nodded,
and Mithran stepped back as all heads turned toward the tent. The
flaps opened and Mirra stepped out. Sunlight burnished the flaxen
hair that framed her delicate face in a cascade of gleaming
ringlets twined with wild blue flowers. A rosy flush coloured her
cheeks, and her blue-green eyes shone with joy when she spied him
waiting beneath the archway. A warm pang shot through Bane's chest,
a manifestation of the strange emotion he had come to know as
love.

A simple white
satin dress clothed Mirra's slender form, its hem, cuffs and collar
edged with lace. A chain of wild flowers loosely encircled her
waist, trailing long streamers of tiny blooms that swayed with the
graceful motion of her strides. She had grown and matured in the
last two years, although she still barely reached his shoulder.
Tallis emerged from the pavilion behind her, her brown eyes
sparkling. Bright yellow daisies decorated her mahogany hair, and
she wore a healer's plain white gown.

Ellese brought
up the rear, wearing a serene smile and sprays of pink flowers in
her iron-grey hair. Mirra clasped her hands before her, the long
lace sleeves covering them. The healers who lined the way threw
petals over her as she walked towards him on bare feet, and the
woods rang with birdsong.

Grem nudged
Bane, reminding him of the surprise he had planned for today.
Raising his hands, he spread them towards Mirra, and the air around
her shimmered, making her glance up in surprise. Bright colours
appeared over her in a shining arch, and she gazed in delight at
the rainbow. The attendant healers gaped at it, Tallis laughed and
Ellese's smile broadened.

Everyone
stopped to admire the rainbow, and Bane lowered his hands, clasping
them before him. Mirra grinned and resumed her progress, the
rainbow following her. The healers tore their eyes from it to
scatter petals over her, and she approached with measured steps,
although he was sure she fought the urge to run to him. When she
reached his side, she turned to face him.

Mirra gazed up
at Bane, a lump clogging her throat. It seemed that she had waited
an eternity for this day, and her eyes roamed his sculpted visage,
with its narrow, high-bridged nose, slanted brows and plunging
widow's peak of jet hair that fell to his shoulders in blue-sheened
wings. His sensuous mouth was curved in a gentle smile, and his
fire-blue eyes shone with tenderness she would not have thought
possible when she had met him, and at which she still marvelled. He
held out his hands, and she slipped hers into them.

A hush fell as
the birds stopped carolling, and the deer crept closer on dainty
hooves. For a moment everything was still, as if frozen in time,
then Bane raised her hands and pressed his lips to the palm of each
one in the strange gesture she had come to know. He often did it
when they met after being apart, and sometimes when they parted.
She had no idea what he was going to do, only that it would be a
strange wedding ceremony indeed, with no priest to perform it.
Although she had begged him to tell her what he planned, he would
not reveal it, and she waited with bated breath.

Bane leant
closer and whispered, "Do not move, and do not speak."

"What are you
going to do?"

Mirra’s eyes
roamed his face again when he straightened, searching for a clue as
to his intentions, but his smile was inscrutable. He lowered his
eyes to her hands, then sank down on one knee, making her gasp in
surprise and dismay. She opened her mouth to protest, but recalled
his request and closed it again. A rustle of amazement went through
the healers, and Mithran and Grem swapped startled glances. Bane
looked up at her, shaking his head when she tried to tug him to his
feet, and she desisted, gazing down at him.

"Mirra," he
murmured, so softly that the healers leant closer. "My heart
belongs to you alone. No other has higher claim than you. The vows
I make to you on this day shall bind me to you forever."

Mirra
swallowed the lump in her throat, and her eyes overflowed. His odd,
formal speech lent a strange and humbling gravity to his words.
Something told her to remain standing, although she longed to throw
herself into his arms.

He lowered his
eyes to her hands. "You have gifted to me the precious oath of your
betrothal, and I vow to protect and cherish you for all eternity.
Never shall an untruthful word pass my lips in your presence. In
you I shall trust, your sorrows I will share. Whatever brings you
joy, I shall endeavour to provide. Any who dare to harm you will
answer to me. All that is mine is yours. I give myself to you, in
body and spirit, without reservation, for all the ages to come.
Thus do I pledge my troth to you, and none shall gainsay me. Upon
the speaking of these words I bind myself to you. Let the world
bear witness."

Bane bowed his
head and pressed the backs of her hands to his brow in a gesture
that brought fresh gasps from the onlookers. Mirra tugged her hands
free and sank down before him, unable to bear his humility. Sliding
her arms around his neck, she embraced him. "I will love you
forever too."

Bane stroked
her hair, murmuring, "This is not exactly as it is supposed to be
done."

"Then you
should have told me what to say, instead of making it a big
secret."

"Then it would
not have been a surprise."

She loosened
her hold to gaze at him. "This is like no wedding ceremony I have
ever heard of."

"Are you going
to finish it before the natives grow restless?"

Mirra sat back
on her haunches, glancing at their audience as she brushed the
tears from her cheeks. "I do not know what to do."

Ellese leant
closer, her eyes sparkling. "I think you should make the same vows,
my dear."

Bane inclined
his head. "How very astute of you, Elder Mother."

"It would have
helped if you had told her, Bane."

He opened his
mouth to reply, but Mirra shook her head. "No, I should have known,
I am just... flabbergasted, that is all."

"As are we
all," Ellese muttered, straightening.

Mirra shook
her head and said, "Bane, I vow to stand by you, and share
everything with you, be it good or bad. Nothing and no one shall
part us. My love for you knows no bounds, and no other has greater
claim to me than you. All that is mine is yours, and I give myself
to you, body and soul, without reservation, forever."

Taking his
hands, she bowed her head and pressed them to her brow, and when
she lowered them, he leant forward to kiss her. "The speaking of
these sacred words has bound us, and the world is witness to our
sacrament." He stood and pulled her to her feet. "Therefore, I
proclaim that we are life-bonded, and from this day forth, husband
and wife."

Bane embraced
her, then released her as Mithran thumped him on the back. Tallis
hugged her, and the healers threw petals over them in a dancing
rain. Grem shook Bane's hand and Ellese hugged Mirra.

Poisoned (The Alex Harris Mystery Series) by Macko, Elaine
Lieberman's Choice by Stuart M. Kaminsky
The Merchant and the Menace by Daniel F McHugh
To Wed A Viscount by Adrienne Basso
A House Without Windows by Stevie Turner
Mail Order Melody by Kirsten Osbourne
BSC09 The Ghost At Dawn's House by Ann M. Martin
Neverwylde by Linda Mooney
Bride of the Shining Mountains (The St. Claire Men) by McClafferty, S. K.
A Most Sinful Proposal by Sara Bennett