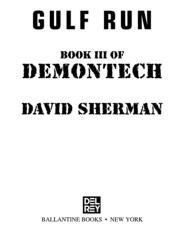 Other books by David Sherman

For
my nephew Pat

The coast huggers rounded the point of Land’s Beginning in the dark of a moonless night. The orange glow from a tiny lamp mounted on the stern of each craft, shielded to be unseen from the front and sides, allowed the boat behind it to follow. One by one, each coxswain opened a second lamp to signal the furling of his boat’s sails. When the sailors dipped oars to water to move against the westerly breeze, the coxswains lit a third lamp. Two hours after the first coast hugger rounded the point, it turned its bow shoreward and the men on each boat moved their oars only enough to keep it in place.

Eventually all the coast huggers were in line abreast, outside the sheltered bay that gave rise to the city state of Harfort, normally a welcome port for traders caught in storms where the Inner Ocean met the Great Southern Ocean, and Princedon Gulf mixed its waters with both. But the storm season was past and the only traders in Harfort port were the shallow-draft ships that plied Princedon Gulf. In another season the docks, taverns, and brothels would be abuzz with activity and jangling with coin, even so soon before dawn. In this season, solitary watchmen struggled to stay awake in the lonely quiet.

Now and again there was a soft plop as a blade reentered the water with the sound of a feeding fish taking a water skimmer. Muffled oarlocks made no noise that could be heard on shore. A bored dog’s bark drifted over the bay from inland.

The first of the coast huggers formed a near solid line from one to the other of the sheltering arms of the bay. Later boats made a second line behind them, and still later boats a third. A fourth and a fifth line were in position by the time the eastern sky began to lighten. The oarsmen of the first line bent their backs and pulled forward to the docks and piers and the beaches in between. The second, third, fourth, and fifth followed sharply and closed the gaps until, when the first was in place, the others were touching so a man could walk from boat to boat to land without getting his feet wet.

The attack didn’t come with screams and battle cries, the flash of blades or thunder of demon spitters. Instead, soldiers in the hundreds padded swiftly through the town to preassigned objectives. The only casualty in the streets was a nodding watchman. A half-troop of soldiers swarmed through the barracks of the city state’s small off-season garrison and captured the weapons before the sleepy Harfort soldiers realized there was danger.

The Earl of Harfort was yanked, naked, from his bed and hauled away by strong soldiers. While struggling, he barely noticed the dead attendants in his bedchamber, or the dead guards outside the chamber door. Behind him, his wife screamed as soldiers ripped away the bedcovers and tore off her nightclothes before taking their turns in the earl’s bed. The soldiers hauled the naked earl to his throne room, where two kicked at the backs of his knees to bring him down. The earl continued to roar and struggle until something heavy thudded wetly into his chest. Then he looked at the floor and saw on the cold paving stones the severed head of his Colonel of the Guard. He looked up and saw the Kamazai Commanding lounging on the Seat of Office—a chair upon which none but the reigning earl ever sat, under penalty of death.

The earl resumed his struggles, trying to break free, until something smashed into the back of his head. By the time his head was clear, his arms were painfully bound and his feet were hobbled.

Bells began to peal, a signal to the rising populace to gather before the walls of the keep.

The curtain wall of the keep wasn’t high, not even twenty feet to the tops of the spiked crenellations, but behind it the rampart was a broad boulevard rather than a mere walkway. The soldiers holding the earl stopped just inside a door giving access to the rampart; he shuddered when he saw the heads of the officers of the Harfort Guard impaled on the spikes. No one stood on the rampart, yet the bells continued to peal and the sound of voices raised in worried question began to grow beneath the wall.

In a moment, members of the court, men and women both, all obviously roused cruelly from bed—as many naked as in bedclothes—began stumbling onto the rampart. Soldiers with pikes and long spears followed, prodding and jabbing them to stand in a rank along the crenellations, though the soldiers remained out of sight of the gathering below. Gasps and cries rose as the people saw the disheveled or naked nobles and courtiers above.

A horn blew to signal that the citizens of Harfort were gathered.

The Kamazai Commanding drew his sword and slapped the earl across his buttocks hard with the flat of his blade. Wincing with pain, the earl moved forward in the short steps that were all his hobbles allowed. The Kamazai Commanding slow-stepped directly behind him, the point of his sword nestled against the base of the earl’s skull. A slave in cleric’s robes trailed.

Louder gasps and cries arose as the people recognized their earl, and rose anew when the stranger appeared at the side of their bound, nude lord.

The Kamazai Commanding looked disdainfully down at the crowd, many of whom wore robes hastily thrown over nightclothes. He snarled, and the cleric-slave came to his side.

The Kamazai Commanding roared unintelligible words that might have been growls from a very large and deep-chested dog. The cleric-slave fluttered nervous fingers about his throat and translated:

“People of Harfort, you have new masters now. Your nobles and their sycophants are no more!”

As one, the soldiers behind the nobles and courtiers thrust their weapons forward, piercing their hostages. Spraying blood, the doomed highborn screamed and gurgled and clutched at their wounds, to no avail. The soldiers stepped briskly forward while tipping the butts of their weapons upward, forcing their victims to bend over the top of the curtain wall. The soldiers then worked the blades free, put their weapons down, grabbed their victims’ ankles, and threw them over the wall, where they landed with sickening crunches and snaps on the cobbled street below. Most were dead; a sturdier few whimpered or moved feebly.

“Do not touch them!” the cleric-slave shouted the translation. “Any who are still alive must be allowed to die on their own. Anyone who touches them will die.”

A line of archers appeared at the top of the wall, their bows drawn, arrows aimed downward. People who had started forward to aid or to rob the fallen scampered back.

The Kamazai Commanding yanked the inverted crown from the earl’s head gouging another wound in the royal brow. He looked at the headpiece for a moment as though wondering what it was. Then a grin split his face and he jammed it onto the nearest impaled head. He nodded. A knight stepped forward, grasped the earl’s hair with both hands and pulled up. The Kamazai Commanding’s sword flashed in the morning sun, and the earl’s body fell away from his head.

The conquest of Harfort was complete. Now it was only a matter of organizing the people into their new occupation as slaves.

A galleon dropped anchor at the mouth of Harfort Bay. On its quarterdeck stood Lord Lackland, self-styled the Dark Prince, half bastard third son of Good King Honritu of Matilda. He looked to the west, farther into Princedon Gulf. Just two more city states remained to be reduced, the two smallest and least important of the Princedons. Then the way would be clear to Dartmutt, where he would finally deal with those infernal Frangerian sea soldiers and their motley army.

“This is a good place; we’ll pull off there,” Haft said softly. He used hand signals to show his men where to leave the road and where to go.

“Here” was where the winding road made a narrow cut through a spur of the Princedon Mountains, the range that formed the spine of the Princedon Peninsula. The ridge was heavily wooded on both sides of the cut, boulders barely visible among the trees on the right, upland, side of the cut. Haft’s nine men, eight of them in the mottled green of the Zobran Border Warders, continued fifty yards beyond the cut to where Haft had indicated before carefully climbing the far side of the ridge and back to its top, leaving no sign that they’d left the road. The first man off the road clambered up a tree to watch their back trail. The other eight men filtered through the trees, seeking places where they would be hidden from the road and protected by stones or stout tree trunks while being able to observe where it climbed the ridge. They strung their bows and readied arrows, drew their swords or axes and lay them near to hand.

Haft moved from man to man, checking his position and view. The road ran straight for nearly a hundred yards from this vantage point before turning sharply left. Its farthest reaches were deeply shadowed. He moved two of his men to positions offering better fields of vision and fire.