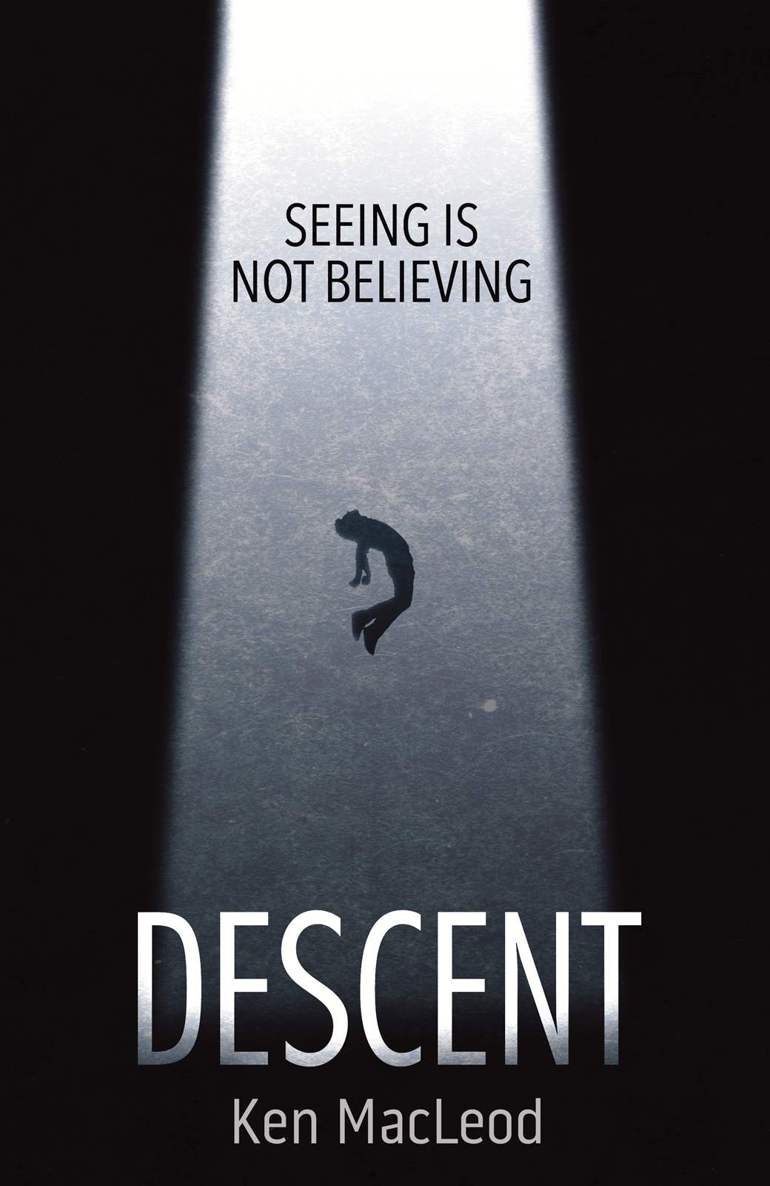 Ken MacLeod
graduated with a BSc from Glasgow University in 1976. Following research at Brunel University, he worked in a variety of manual and clerical jobs whilst completing an MPhil thesis. He previously worked as a computer analyst/programmer in Edinburgh, but is now a full-time writer. He is the author of thirteen previous novels, six of which have been nominated for the Arthur C. Clarke Award, and two which have won the BSFA Award. Ken MacLeod is married with two grown-up children and lives in West Lothian.

Find out more about Ken MacLeod and other Orbit authors by registering for the free monthly newsletter at
www.orbitbooks.net
.

To the memory of Iain M. Banks

The trouble with my job is that far too often it lets me lie late in bed, watching my ex-fiancée. I don’t blame the job, you understand. I blame myself, even while I’m doing it.

Especially
while I’m doing it. This is an activity so futile, so self-destructive, so time-wasting, so unethical and unprofessional and unproductive and downright
unsafe
that I hate myself for indulging in it, as if I were addicted to some harmful and expensive drug (I am, to several) or fixated by a kink so innocuous yet ridiculous that it doesn’t have a porn site let alone a pride march to call its own (that, too) or obsessed with a conspiracy theory so elaborate yet so tenuously supported and so self-centred and self-serving that I’d blush to outline it (but you’re ahead of me, right?) or … ah, fuck it. Compared to all the other things I have to be ashamed of, what I’m doing right now is a foible.

So, here I am at, let’s say, eight thirty on a Tuesday morning, leaning back against the headboard of a bed in a flat near Haymarket in Edinburgh and hovering over a Kelvinside canyon of sandstone tenements in Glasgow. I have tree-top-height line of sight on a door at the top of a dozen worn stone steps, cast-iron railings on either side, man-high weeds sprouting from between the flagstones of the carpet-sized front yard.

The door opens. Gabrielle steps out and closes it behind her. Her red hair flicks as she turns. She’s pert and petite. Her belted coat looks a size too big for her. I’m not getting much in the way of sound other than road thrum and beep but I fancy I hear her boot heels tick as she skips down the steps and sets off up the street towards the main road. I zoom after her, lose resolution, and for a moment consider renting some time on the drone and sending it drifting after her. Then I decide this might be too risky and I just let the app flick and a new view pops up, this time face-on and from lower down, probably from a traffic cam at the junction.

God, she’s pretty. Bright wide eyes and big wide lips in a small face. Not perfect: she has the brow-ridge, barely noticeable except in profile, and the slight fleshiness about the nostrils that trace her descent and, to the discerning, mark her kin, but these make her all the more beautiful and fascinating to me. Her eyes and lips are narrowed at the moment. I wish I knew what she’s thinking about. Probably work. It’s less than ten minutes’ walk from the steps of her flat to the swing doors of the biology building. Lucky her that she has such a brief and brisk commute. Lucky me that I can follow her all the way.

I watch her until she disappears into the ground floor foyer. Another moment of hesitant consideration, this time of linking to drone cameras that can see her through the ninth-floor windows. I’ve done this once or twice – well, seven or eight times – over the past few months, and I’ve got away with it so far, but for today I decide not to push my luck. If she ever found out she could call the police. Well, maybe she wouldn’t, all things considered, but others might. Then, whatever the outcome, the least that would happen is I wouldn’t have the job. End of problem. There are times when I think this would be a solution.

But I do have the job, and with it a big and busy day ahead. I catch up on the news, knock out a few instant reactions, then take the iGlasses off. I consider visiting a few of my favourite sites, then – to compensate for my earlier indulgence – decide not to, and to get up. I have to be at Holyrood for ten thirty, and I want to be there early or at least in good time.

Just before ten, any day in the middle of May, the street at the top of the Mound is crowded with men in black. This disturbs me less than you might think. They’re ministers of the Church of Scotland, here for the General Assembly.

Men in black, I think. Ha! The thought makes me smile.

In my early teens, after I got into all the flying-saucer rubbish and – as I thought at the time – out of it unscathed and unsullied, I read science fiction on my father’s old Kindle. I’d outgrown kids’ books, YA was embarrassing, and the classics prescribed at school were boring and about girls. The SF novels on that antique device with its red leather case were labelled ‘classic’, but my father persuaded me not to let that put me off.

This is why, as I walk up the Mound and down the High Street, the alternative Edinburghs I distract myself by calling up in rapid succession on my glasses aren’t just the standard historicals, entertaining though it is to stroll the main drag of Hume’s and Smith’s Athens of the North and watch the chamberpots tipped from upstairs windows to splatter heads below, or to scroll the city’s growth from Neolithic settlement to modern capital, or let the smoke of Victorian lums and Edwardian slums rise to swamp the streets and then, with quite surprising suddenness, disperse the miasma with a wave of the Clean Air Act.

I play with overlays of alternate pasts and possible futures, with steampunk and cyberpunk, utopia and dystopia. Looking down towards Waverley Station, I replace its long sheds with the Nor Loch, stagnant and stinking. I swing by the Victorian eminence of the Bank of Scotland and see it blazoned with the banners of John MacLean’s 1919 Workers’ Republic. The vista along George IV Bridge gets an instant make-over as a Blackshirt mob storms the National Library, then I time-shift the street to the metropolis of concrete, glass and steel the agitators fancied themselves fighting for. Before I turn into the Royal Mile, past the verdigrised statue of Hume with its pilgrim-polished toe, the whole fascist facade crashes under USAAF bombs, and I smirk in smoke so thick it almost makes me miss my footing and so vivid I can smell it.

The view, now downward to the sea, is of the High Street in yet another unlikely mash-up of possibilities. The houses and shops and churches retain their higgledy-piggledy sandstone granularity, but beyond the Old Town new towers rise, spindly, improbable constructions of materials that suck sunlight and burn breezes, lively as trees. The flags that hang from poles jutting over hotel and shop doorways are the saltire of St Andrew and the cross of St George, Europe’s star-circled banner and Ireland’s starry plough, the Maple Leaf and the Stars and Stripes, and the red flags of the workers’ republics (unimagined by and unimaginable to MacLean) on whose trade and tourism and tat the street relies. Above are, of course, the airships without which any such alt-historical scenario would be incomplete – no lumbering gasbags these, but silver-skinned streamlined shapes that bore through the air with drill-bit determination. Between the airships’ altitude and rooftop height the air is speckled with the dots and flashes of drones occluding or reflecting light.

As above, so below: form follows function in every outré retro style. Nothing is ironic, nothing tips a wink to the past. Men’s broad-brimmed hats shield from unforgiving sun or lashing rain, and block surveillance from above; dandy shirtfronts, long flapping coats and wide lapels soak energy from the air and information from the ether. The face-framing, profile-hiding visors of the poke bonnets affected by fashionable young ladies are transparent from within, opaque from without, giving augmented peripheral vision on the inner surface, and conferring privacy to and from the sideward glance as well as shade; floor-skimming full skirts might look like clumsy crinolines in a still picture, but in the moving image they balloon and glide, hems rippling autonomously like the lateral fins of flatfish to avoid toes and heels, obstacles and dirt, and their extravagant yardage of sun-drenched or wind-stirred fabric powers that motion as well as warming or cooling threads and a panoply of coms with every flounce; lacy parasols uplink to satellites and drones, and dainty handbags encompass libraries by default.

Vehicles on the street whizz by silently but for the whir of rims on cobbles, powered by legs and light, solar battery and hydrogen tank. Urchins scamper unhindered through the throng, watched over by the automated benevolence of the distributed panopticon stare and protected by loitering overhead drones like time-shared guardian angels poised to pounce. Layered in and imbricated with the new, of course, are the strata of earlier looks and times: diesel-belching buses, petrol-burning taxis, trouser suits and short skirts and jeans and skip caps and bare heads and bare legs, airliners coming in with metronomic regularity above the North Sea and then the Firth to sink above Cramond and touch down at Turnhouse, or still climbing from far to the south to head out over the Atlantic high above the airships, and so on and on, but here it is nonetheless, an iffy skiffy future like none I would or could have imagined in my teens.

I have a recurring dream. The details vary, but it’s always the same dream. It’s so vivid it doesn’t feel like a dream. It feels real at the time. I told it once to a man who knows about these things, and he told me what it means. It means they’ll stay with you, he said. They’ll always be with you. You’ll take them with you to the stars.

This is how it begins.

I’m falling out of the sky. All I can hear is screaming. How much of it is from the air and how much from the other hundred-odd passengers I can’t tell. We’re hurtling straight towards the ground, at free-fall speed from twenty miles up, in a needle-nosed, narrow-winged arrowhead. From the window I can see a blue curve, an arc of a vast circular target whose centre is dead ahead. It’s impossible, at some primal level of my primate brain, not to be convinced we’re going to hit.

At such moments your life is supposed to flash before your eyes. It does, if you’re flicking back and forth through decades of visual capture on your glasses. The rational layer of my mind is as terrified as the monkey module. I’m not afraid of dying. I’m afraid of judgement.