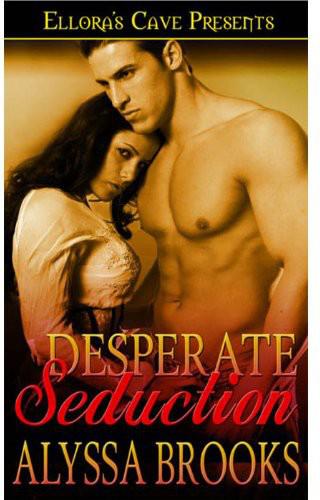 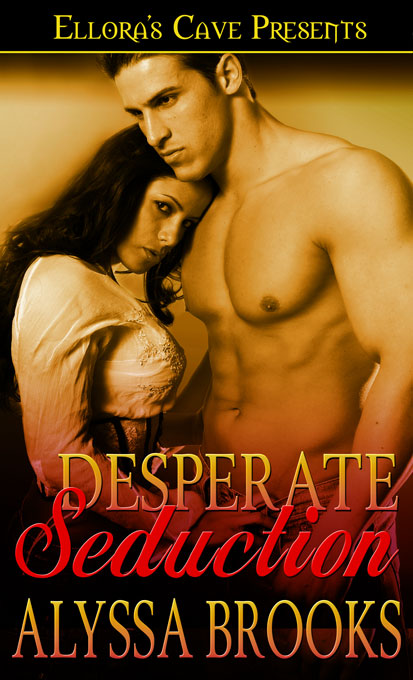 This book may not be reproduced or used in whole or in part by any means existing without written permission from the publisher, Ellora’s Cave Publishing, Inc.® 1056 Home Avenue, Akron OH 44310-3502.

E-
rotic
love scenes are explicit, leave nothing to the imagination, and are high in volume per the overall word count. E-rated titles might contain material that some readers find objectionable—in other words, almost anything goes, sexually. E-rated titles are the most graphic titles we carry in terms of both sexual language and descriptiveness in these works of literature.

X-
treme
titles differ from E-rated titles only in plot premise and storyline execution. Stories designated with the letter X tend to contain difficult or controversial subject matter not for the faint of heart.

A special thank you goes out to Larissa Lyons for her wonderful help and encouragement with Desperate Seduction, and to my editor, for giving me the chance to succeed with Ellora’s Cave (and, of course, for finding all the mistakes I didn’t!).

The news crashed through Claire and her stomach sank like a cinder block in water.

Premature ovarian failure? How could that be?

At twenty-eight, she hadn’t found Mr. Right yet, hadn’t had children, hell, she was still a damn virgin. She’d always thought she had plenty of time.

“Is there any chance the results are wrong? A possibility that I can still have a baby?” She swallowed and looked at the doctor. His sympathetic brown gaze filled her with dread.

She trusted Doctor Johnson’s opinion. Knew damn well he was a good doctor. He’d been her gynecologist for years. Right now though, she wished he were wrong, wrong, wrong.

Regret gnawed at her heart, tears brimming in her eyes. She should’ve practiced healthier habits. Stopped eating lunch out almost every day at the taco joint she was addicted to. Exercised. Come in for regular, yearly check ups.

Instead, she’d focused on her job as an accountant for a local company, neglecting her health, her social life.

“Is there anything I’ve done? Anything I can do?” Clouds of doom closed in around her. A sob choked her. Why hadn’t he replied to her last question? Was the answer so terrible? Could she ever have a baby?

“As far as I can tell, no. But don’t blame yourself, Claire. Sometimes we just get bad genes.” He gave a sympathetic shake of his head. “I’m afraid there isn’t a concrete 5

“And as for having a family?”

“You need to see a specialist at this point, Claire. Hormone therapy and fertility treatments may help. Though, five to ten percent of women with POF can get pregnant naturally.”

Damn it. It wasn’t as if Blake’s door was going to bite her. Over the last few years, she’d knocked on it a hundred times.

Oh, why couldn’t she bring herself to ring the bell? It wasn’t as difficult as she made it seem. All she needed to do was press a simple button and voice one simple proposition. A business proposal, really. No big deal.

Claire couldn’t look at it any other way. She needed to get pregnant. Blake would be the perfect father. They were friends. They loved each other. What was a little sex?

She groaned, running her hand through her hair as a cool fall breeze whipped it.

Since the other day her life had changed. Majorly. She’d seen the specialist and listened to the list of drugs and therapies presented as options. She’d considered everything.

Nothing appealed but this.

Again Claire counted to three, her finger hovering at the bell. But she couldn’t do it.

Tears brimmed in her eyes and she choked on overwhelming frustration. A sense of immediacy pulled her. Since she’d received the news, she felt as if she had no time left.

To think of the two years she’d squandered fretting over her ex. She’d given up on finding Mr. Right after her big break up with Mr. Wrong, a three-year relationship with a goody-goody who wanted to wait until marriage, but didn’t want to marry. Half a decade of wasted time that left her alone and a virgin.

Claire wanted to have a baby naturally, if she could.
Now
. Not in several years,
if
the medicine proved successful,
if
she found someone. What if her circumstances deteriorated? Maybe in five years she’d go to the doctor, in love and ready to get 7

pregnant, only to receive the news she couldn’t. It was too iffy to chance. This was the only way.

Last week, when she and Blake had met at the movies, there had been a moment…

His lips had hovered dangerously close to hers, his eyelids growing heavy. She’d been positive he was about to kiss her, could swear she’d seen more than a glimmer of attraction in his cerulean blue gaze, a clue that perhaps his feelings for her had changed and maybe, just maybe, he cared for her as more than just a best buddy.

She definitely had the hots for him and had since the moment she started tutoring him back in college. There was nothing sexier than Blake in his silly cowboy hat that he insisted she call a Stetson, or better yet, when he wore his karate uniform. The two combined made her salivate. She didn’t know a better-looking guy, with his brilliant blue eyes and dark coloring. Then there were his muscles—tight, sinewy, sexy.

Since they’d become friends in college, she’d hidden her crush from him. She enjoyed his company so much that until now, she’d never dared to take the relationship a step further. She preferred to have him as a trusted friend rather than admit the truth about how much she wanted him. But now, everything had changed. Nothing mattered to her more than getting pregnant, not even her pride or the chance of rejection.

Hearing that she might not be able to have children made her realize how very important a family was to her. She was done wasting time.

This could work out perfectly, if only she could harness the guts to ring the bell. She didn’t have time for dating. She needed to get pregnant this minute. Screw work. She’d buried herself in her accounting job far too long. Enough with the shyness, she couldn’t afford it.

She was ringing that damn doorbell.

The doorbell rang and Blake cranked off the steaming hot water. For a moment, he contemplated whether to answer. He wasn’t expecting anyone, nor did he care for company. Exhausted, all he wanted to do was hit the sack. After instructing four karate classes in one afternoon, his muscles ached.

But what if it was Claire?

Damn, they needed to talk. He grabbed a towel off the rack and wrapped it around his lower half before heading toward the foyer. As he reached the front door, he noted her curvy shadow through the tinted glass. His cock twitched in response and he commanded it down.

But damn,
if only
. The things he could imagine making her do…

He swung open the door, gripping his towel. “Hey, I’ve tried to call.” Blake hadn’t seen her in days, not since he’d almost kissed her and he needed to set her straight. Though he’d love to start something sexual with her, hell, it just wasn’t possible. Not with his kinks.

There was no way he’d risk their relationship. He didn’t want to lose her friendship because of something as silly as petty attraction. They’d been friends since college, when she’d tutored him in math. They’d clicked immediately, growing closer through the years. They had fun together and trusted each other. Who the hell else would he eat too many barbeque potato chips with, while watching sci-fi movies? Go out for beer with at the pizza joint, even on Wednesdays? Cheer him and his students on during karate competitions?

He gazed down at Claire, unintentionally devouring her. Damn. Why couldn’t he stop looking at her like that?

“I, um—” She gulped. Thick brown lashes veiled her wide, dark cocoa eyes, hiding whatever she was thinking.

Claire’s full lips parted slightly. She looked about to say something, but she didn’t.

He wanted to urge her to speak, but he couldn’t help his own silence. She was so stunning he didn’t trust his tongue. The pale skin of her cheeks tinted a healthy pink 9

from blushing and she gave off an aura of naïve sexuality. Blake was well aware that Claire was a virgin, a fact that tortured him as much as her innocent demeanor.

He studied her, soaking in her delicious body. Her addiction to Mexican food and chocolate gave her petite form a soft, curvy figure. The yellow sundress clung to her every peak and valley, accenting her in all the right ways. Innocent as the outfit was, he’d never seen her in something so bold. The neckline dipped in the front, revealing a hint of the crevice between the creamy white mounds of her breasts.

Claire never dressed like this. She typically sported sweatpants when she finally peeled herself out of the strait laced black or gray business suits she wore to work. Then again, Claire never let her hair free either and a cascade of golden brown silk currently flowed down her back.