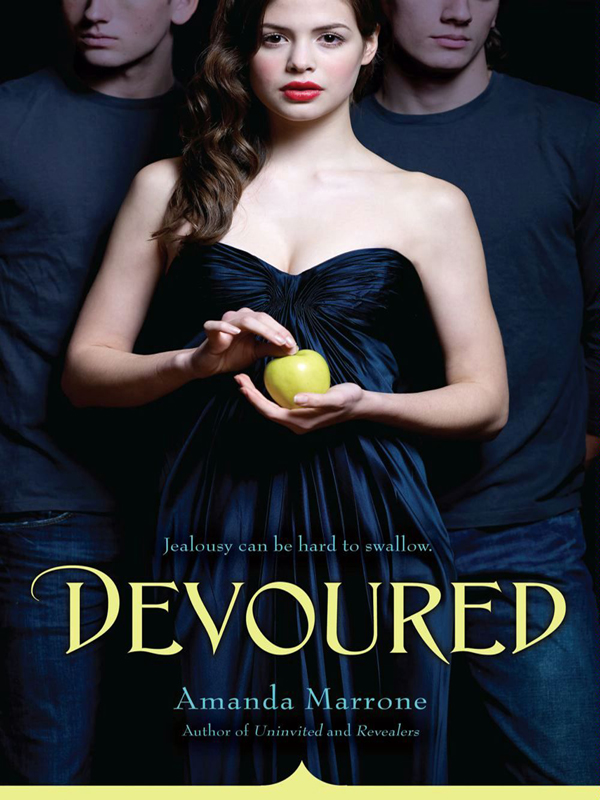 This book is a work of fiction. Any references to historical events, real people,

or real locales are used fictitiously. Other names, characters, places, and incidents

are the product of the author’s imagination, and any resemblance to actual events

or locales or persons, living or dead, is entirely coincidental.

For information about special discounts for bulk purchases,

The Simon & Schuster Speakers Bureau can bring authors to your live event. For more

The text of this book was set in Adobe Caslon.

Summary: Rising high school senior Megan has been haunted by her twin for ten years, but now Remy is trying to warn her about terrible danger surrounding Megan’s summer job at an amusement park called the Land of Enchantment.

This is for my father, Jerry Malloy, despite the factthat he made me knock on mausoleum doors.

And no, getting ice cream afterward didn’t make it better.I still love you, though, Dad.

Thanks to my so-scary-she’s-perfect agent, Wendy Schmalz, and my spooktacular editor, Jen Klonsky, and all the folks at Simon Pulse. Thanks to my critique group: Pam Foarde, Rob Walsh, and especially Naomi Panzer, and Nina Nelson for rapid reading toward the end. And thanks to Kelsey Johnson Defatte for her never-ending support! I couldn’t do it without you all!

“Helena,” the large mirror beckoned from the east wall, “I have something of the utmost importance to show you.”

Helena adjusted the crown on her head and scoffed. “I really don’t think I need to see another damn dwarf pining away at the glass coffin.”

“It’s not that.” The mirror flashed red with impatience. “Come and look.”

Helena ignored the mirror’s request and continued to gaze out at the meadows that had turned from dry brown to lush green seemingly overnight. “Mirror, did you know the girl used to love to run through the new spring grass?” She rolled her eyes. “With the birds twittering maddeningly after her.” Helena thought it was through this same window that she’d felt the first pangs of envy—of hate.

No, not through the window, she decided, through the mirror. She pulled the fox stole tighter across her chest to guard against the cool breeze.

“My
queen
,” the mirror implored, hoping a more formal tone would appease her. “You should see it for yourself, because …” It paused. The mirror had wanted to lure Helena to its glass and surprise her. It took great pleasure in seeing Helena’s face contort with shock, but over the past few months, as Snow White had retained her beauty in the coffin, Helena had sunk into such a deep depression, the mirror could rarely entice her to look into it. But the mirror knew Snow White had been rescued—by a prince, no less—and surprised or not, Helena would be devastated by the news.

“She lives,” the mirror whispered.

Helena inhaled and squeezed her eyes tightly shut. She knew this day would come. The girl simply would not die.

“So she lives,” Helena said as a sharp pounding started in her temple. “You sound surprised.” She rose from the window seat and approached the mirror. She looked at her reflection and plucked out a single white hair from among the black.

The mirror shimmered, casting Helena’s image in a yellow light.

“Well, get on with it,” she said. “Show me the girl, unless you’re not done tormenting me with my fading looks.”

“She lives and she will soon wed,” the mirror stated matter-of-factly. “Preparations are already at hand, and a courier is on his way with an invitation.”

A castle bustling with wedding activity appeared in the glass. Helena watched servants bring in armloads of ivy and heather for the floral arrangements. Snow White skipped into view, took a branch of heather from one of the maids, and waved it about as she danced past them into an open courtyard.

Helena shook her head and turned from the mirror. She rested her hand on the cool marble windowsill. “I’ll be happy to attend Snow White’s wedding,” she said. “And I know the perfect gift.” She walked back to the wall and ran her fingers along the mirror’s gilded frame. “
You
will belong to Snow White.”

“My queen, I belong to you!” the mirror protested.

Helena caught a quick glimpse of the creature that dwelled inside the mirror before her own reflection reappeared. She shuddered knowing that the long, hooked nose flanked by smoke-filled eyes would likely visit her in a nightmare tonight.

“Well,” Helena said to the mirror, “I know how much you enjoy your hold on me, but you needn’t worry. I have no doubt Snow White will succumb to your
charms
as easily as I did.” She smiled. “Frankly, at this point, the prospect of you corrupting her soul is far more appealing than seeing her dead.”

The mirror said nothing. It was already wondering just what would bring Snow White under its sway. Perhaps the knowledge that her prince had been intimate with many of the castle maids—some of whom were at this very moment sewing her wedding nightclothes—might prompt Snow White to seek out the mirror’s special abilities for reassurance. Or spying.

The surface of the glass glimmered happily. Helena knew it was already counting the seconds until it could be alone with Snow White. She sighed. “If only the huntsman had done his job properly and carved out her heart when he was told to, I think I might have had a chance at happiness.”

Helena’s stomach turned. The mirror had told her she’d take in what she coveted the most—Snow White’s beauty— by eating the girl’s heart. She ran her fingers over the coarse hair poking out of her chin, hating to think of what she’d gained by eating the boar’s heart the hunter had presented her with instead.

She looked out at the forest surrounding the fields. The huntsman fled when she asked how it was possible Snow White was cavorting with dwarves if he had indeed removed her heart. She caught sight of a small wisp of smoke floating up over some trees in the distance and wondered if that was where he was hiding. “I wish I could give
him
a gift as well,” she said.

The mirror flashed in anticipation. Unlike some of its previous owners, Helena had never guessed its true nature. She’d never divined that it could have done away with Snow White long ago if only she had wished it aloud.

Helena curled her hands into tight balls. “I wish he could feel the envy that haunts me night and day, the all-consuming longing for what others have.” Helena laughed crazily. “I wish his kin
and
Snow White could feel this burning in their souls
forever
.”

Helena shook her head and sighed again. “In the meantime, I guess I’ll have the seamstress cut me a new dress and have some shoes made.” She looked at the mirror and smiled bitterly. “I hope you bring as much joy to Snow White’s life as you have to mine.”

She left the room, and the jinn that resided in the mirror granted the wish Helena unwittingly cast. It sent out a spell that reached around outcrops of rocks and twisted through brambles until it found the huntsman turning a skinned rabbit on a spit. The spell swirled around the man, and he paused as the hair on his arms stood on end. He scanned the thicket, thinking a wolf was lurking, perhaps drawn by the smell of roasting meat.

Having found its first mark, the spell wound its way around the trees to the next kingdom where it found the girl with skin as white as snow singing happily in the palace gardens. It wrapped around her heart, and she gasped, not knowing why she felt so uneasy just days before she was to wed her beloved prince.

Back at the castle, the mirror gleamed with pleasure. It then thought of Helena and wondered if it should warn her about what it had seen in the future—iron shoes, redhot from lying in a bed of coals, placed on her feet at Snow White’s wedding reception. It saw Helena dancing in the enchanted shoes until she took her last breath. The mirror pondered its ability to change her destiny, but in the end it decided that if Helena really wanted to see her stepdaughter wed, who was it to stop her?

SHADES: An Evil Dead MC Story (The Outlaw Series Book 3) by James, Nicole
The Truth Hurts by Nancy Pickard
Breakaway by Maureen Ulrich
The Gospel Makers by Anthea Fraser
One Touch of Scandal by Liz Carlyle
The People's Will by Jasper Kent
Can't Let Go by Jane Hill
Learning to Dance by Susan Sallis
The Schirmer Inheritance by Eric Ambler
Steamed (Steamed #1) by Nella Tyler