Read Diamond in the Buff Online

Diamond in the Buff 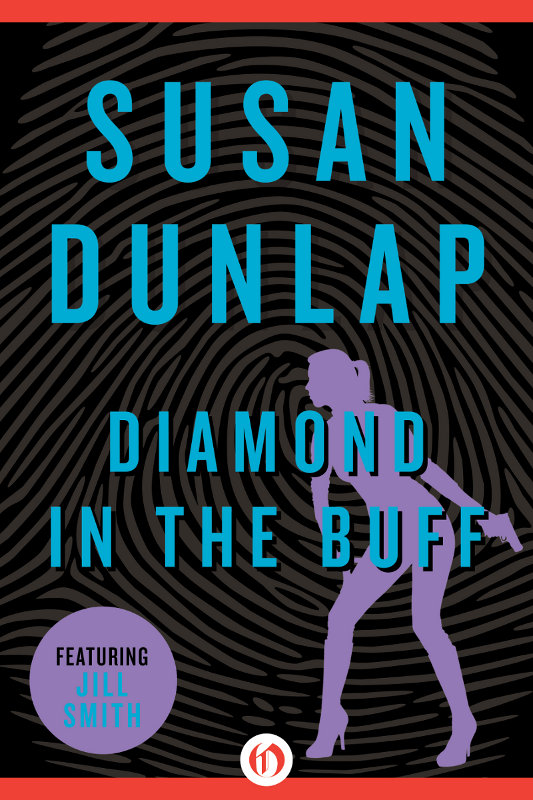 Diamond in the Buff
A Jill Smith Mystery
Susan Dunlap

A Biography of Susan Dunlap

T
HERE’S A SAYING IN
Buddhist lore I heard somewhere: The way to domesticate a horse is to put him in a fenced pasture, but make that pasture so big he never sees the fence. Thus both horse and owner are satisfied.

In Berkeley, California, we’ve got the biggest pasture around. We take pride in our openness. But the problem with an endless pasture is that it fences in some rather odd horses. And there’s not one of us in it who wouldn’t raise an eyebrow at half the other equines in the field.

The combination of a three-year drought and now a sudden heat wave had squeezed our fences as close as those on the ramp to the glue factory. Tolerance was getting rare as green grass. By the third day of the heat wave everyone was acting strange. At any other time, if Farley, the dispatcher, had called me to a 245 (felony assault) like the one he had today, I would have thought it was a joke. As it was, I did wonder if the heat was getting to Farley.

By this third steaming day, the few sleeveless tops any of us owned were in the hamper. We’d all spent two nights when it was too hot to eat, too hot to sleep, and, it was a fair guess, too hot to touch the person lying next to us. Too hot, that is, for anyone who had not repressed her hunger for Seth Howard for two years, wary of the dangers of being involved with another detective on the force, for anyone who had not seen Howard’s curly red hair shake as he laughed day after day, who had not sat virtually knee to knee in a tiny office, watching his big grin spread slowly, inexorably across his face, like a finger running up the inside of a thigh, till the grin burst into great guffaws and my whole body quivered. Talk about stress on the job!

But no one said being a homicide detective was easy.

Now at noon, Howard was in one of the showers and I was still under the all-cotton sheet in the California King-size bed (the domestic equivalent of the endless pasture).

But I had to be out of here (out of both the California King and The Palace around it) by the weekend. Apartment hunting was my reason for taking the day off. Helping to apartment hunt was Howard’s.

I picked up the East Bay
Express
and turned to the ads. But after living in this house with its wine cellar, hot tub, sauna, three decks, and a nightly view of the sun setting behind San Francisco, moving to even the best apartment in town was like replacing an elegant Arabian stallion with a mule.

Howard stuck his head out of the bathroom. He was wearing a blue towel I’d gotten him from the L.L. Bean catalog and he had one arm in a T-shirt from the slide show/lecture on a Himalayan climbing expedition we’d been to last night. He shoved the other arm in and pulled the shirt over his head. It was too short, not an uncommon occurrence for someone six-six.

“Thanks a lot,“ Howard grumbled. “Another of my shirts you inherit.”

“It’s kind of apt, don’t you think?” I said, reaching over to run a finger beneath the hem. “It ends abruptly, like the lecture itself.”

Howard flopped on the bed. “I’ll tell you, Jill, Bev Zagoya’s lucky she’s a mountaineer and not a full-time lecturer. She’s got no sense of timing. She spends an hour on the tedious preliminaries to the climb, and then she spots a blond guy in the back of the room, decides she’s got better ways to spend her evening, and rips through the tale of the climb to the summit like the cops are after her.” He grinned and wriggled closer till his leg brushed mine through the sheet. “A condition you might consider yourself.”

“Okay, Detective.” I started to toss the newspaper aside, but Howard caught my arm and laughed.

“Finally got to the ads, huh?”

“Well, Jill, my offer stands. I’ve got the best house in Berkeley—”

“This
is the best house in Berkeley.”

For no more than an instant the skin around Howard’s eyes tightened and his jaw dropped. In less than a second he was laughing. But I knew the sore spot I’d poked. His house was no mule. But it wasn’t an Arabian either. Except to him. To Howard the shabby six-bedroom brown shingle in which he was chief renter, of which he yearned to be owner, was Kentucky Derby material.

The phone rang. I picked it up with relief. Momentary relief. It was the call from the dispatcher. Calling on my day off. Right then I knew it was not a good sign.

“You’ve got a two forty-five on Panoramic Way. Pereira did the prelim.”

Assault with a deadly weapon. In Homicide–Felony Assault we get plenty of assaults. We don’t get called in on days off to do the follow-up. Definitely not a good sign. “Did Pereira say what the deadly weapon was?”

Farley paused. I could have sworn I heard a laugh. What kind of sign was that? “Yeah.”

“And our victim was assaulted with … ?” I prompted.

A
SSAULT BY EUCALYPTUS!
E
VEN
in the giant pasture of Berkeley, that was a new one. The guilty party, according to the dispatcher, was one
Eucalyptus camaldulensis.
It was going to be a helluva report to write.

I did a quick brush of makeup, grabbed a denim jacket (R.E.I. catalog), and was headed for the front door when the phone rang again. I hesitated before picking up the cordless phone next to the bed. I hated to leave Pereira standing in the scorching sun next to a 120-foot-tall “responsible.”

“Smith? It’s Murakawa.” Paul Murakawa was a patrol officer. His calling me at home in the middle of the day was not-good sign number two.

“Oh. Well, I got this call. The complainant’s in my district. I wouldn’t contact you officially …”

I stepped into the living room. The front door was thirty feet away. I’d leave the phone there. “Then why don’t I call you—”

“… but I thought you should handle it,” he said in one burst of breath. If I’d had any question about not-good, Murakawa’s insistence answered it. Murakawa was young, athletic, and had more energy and drive than any other horse in the pasture. I had never heard Murakawa asking anyone to do work for him. Not until now. Not-good, indeed.

“The neighbors,” he said.

“They didn’t file a complaint,
this
time. But someone needs to talk to Mr. Kepple.” I could almost see Murakawa shaking his head. And I could almost see a smile, so slight that it would alert only the most perceptive soul to Paul Murakawa’s relief that it was not he who was going to deal with Mr. Kepple. But I could appreciate that smile; if I could have passed the buck to someone else I would have been grinning ear to ear.

“The two forty-five? That the call on Panoramic Way?”

“Right. The assault by eucalyptus.”

Murakawa hung up. He was laughing.

I plunked the phone back in its holder and headed for my car. As I drove down the hill I thought about Mr. Kepple and his electric mower, blower, and hedge clipper, Mr. Kepple and his earphones. I wondered when was the last time Mr. Kepple had
listened
to anyone, and I contemplated my impending afternoon with a malicious eucalyptus and an oblivious ex-landlord. Murakawa’s example of professional courtesy was exactly the reason cops had no private lives.

At the station I changed cars. In a city that is self-insured, it doesn’t pay to take your own car anywhere on duty. In an accident, collecting from
your
insurance company would suit the city fine.

The patrol car was hot as a hibachi. I drove east across Telegraph Avenue. The sidewalks were crowded with street artists and shorts-clad University of California students licking ice cream cones. The scene reminded me that I hadn’t had time for the ice cream I’d envisioned for breakfast. This is the reason cops don’t have decent food lives. I drove on past the fraternity houses and the Cal Bears football stadium.

Half a block later the road ended at the bottom of the sharp surge of hills.

Panoramic Way begins there. Looking at the abrupt rise of the hills, it is easy to imagine one tectonic plate sliding under another, crumpling its edge and creating the Berkeley Hills and the Hayward fault.

And yet the feel of Panoramic Way is not the wild temporariness of buildings hanging off the edge of an earthquake fault. It’s more like an old, hillside English village with vine-covered, leaded-windowed cottages that squat up against the sidewalk. The street veers back and forth up the hillside. The pavement is so narrow that when cars meet, the descending one must back up till there is a spot to pull over and the uphill driver can squeeze by. At the first three corners the road cuts back sharply like the sides of a clown’s mouth. To make the turn, a driver has to get right to the outside edge of pavement and cut the wheel so hard the tires squeal.

Across from my call site a retaining wall held up the ground. Redwoods and live oaks grew above it and vines dangled over the edge. And under them Mazdas and ancient Porsches were wedged against the wall by the
NO PARKING ANY TIME
signs. (That’s how hidden our fences are!)

Patrol Officer Connie Pereira was standing on the curb. Pereira was my closest friend in the department. We’d been to conferences, parties, all-night stakeouts; at dawn, Connie Pereira always looked as good as she did at dusk. I’d never seen her show the effects of a wait.

Until now. Pereira must have been waiting here about half an hour. She looked like it’d been half a century. Any curl in her blond hair was gone; it hung limp over her damp forehead. Her eye makeup was gone, leaving pale blue lines down her cheeks. Her skin was not tan but the color of soggy squash. And with all that, she was smiling.

I pulled the patrol car in front of the driveway. It was the only empty spot, legal or otherwise. Pereira hurried over. Closer up I could see the stains of perspiration that streaked through her shirt.

“Justice,” she said, fanning herself with her note pad.

I followed her gaze to a redwood deck attached to a chalet-type house. The deck stood flush against five eucalypts that formed a giant border with the shabby English-style stucco cottage uphill. The decking sparkled in the sunlight. At the near end, wooden chairs painted apple green, lemon, and strawberry clumped around a glass-topped table. At the far corner, the one chaise lounge lay on its side, as if drawing the eye to the gash in the railing above it. A eucalyptus branch that must have been ten feet long and twelve inches in diameter—the assailant presumably—lay nearby. Glancing at the eucalyptus trunks I could see the spot from which the guilty branch had ripped. The bark had already fallen from the trunk, a phenomenon not uncommon in eucalypts. The lines of the scar left by the fallen branch were clear. From where I stood, some thirty feet away, the tear looked rough and abrupt, just as it normally does when a branch tears loose.