Diaries of an Urban Panther 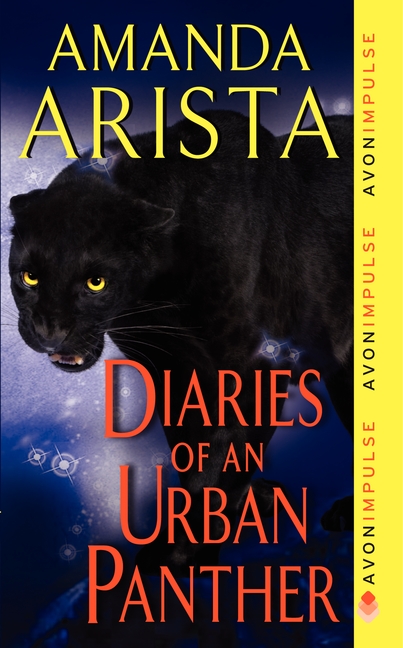 Diaries of an Urban Panther

A
s I stepped into the crosswalk, the boy next to me ran across the white stripes to his mother’s waiting minivan. His blue book bag danced wildly on his back as his hands waved in reckless abandon. Just down the road to our right, a car engine revved and the driver accelerated towards the crosswalk.

The space between my shoulder blades tingled and the scene before me slowed. The manic screams of the children on the playground across the street quieted. The breeze stopped carrying the sweet scents of fall. The police officer’s stop sign rose slowly and froze just above his head. Everything faded into the background as my senses focused on what was going to happen. I knew that in five seconds, there was going to be a schoolboy pancake with a side of scrambled Violet.

Instinct took hold and I darted out in front of the car. Scooping up the small boy from the asphalt, I leapt onto the hood. The motion sent the two of us sliding, leaving a clean streak across the hot metal. We flew off the other side and tumbled to the ground.

I hit the pavement hard, almost on all fours. Kneeling, I held the boy tightly, his arms clutched around my neck. His little heart beat wildly, almost as fast as mine. I looked up to follow the driver down the street. It was the same car that had been parked outside my coffee shop. I caught a flick of blonde hair and a flash of white teeth as the driver laughed and sped around the corner out of sight. His parting shot echoed out his open window, “See you later, Leftovers.”

The little boy began to wriggle in my tight grasp and pushed back to look up at me. I saw his doe-like eyes, his mouth in a small O, and the pulse in his neck. His little face puckered in panic and a small finger worked its way up to poke me in the eye.

That’s when the world seemed to start up again. The wind swept through the trees carrying the scent of excited children. Doors slammed. People suddenly hovered all around us. “ “Oh my god, Tomas,” a woman cried out and the boy was snatched from my arms.

I leaned against the car beside me, blinking rapidly to make the sting from his grubby little finger go away.

As I pushed myself to my feet, I caught my reflection in the side view mirror. Yellow eyes stared back. Crap. Guess if I saw a monster with yellow eyes, I’d poke her in the eye as well.

“You all right?” The police officer’s musky cologne and the smell of leather from his holster drew my attention as he walked closer. He was a police officer. Just a public servant. Not a threat.

“Fine.” I bent over, hands on my knees, hiding my face, simply taking in long deep breaths. In through the nose, out through the mouth. I’m just a writer. And I’m fine. Just fine. Everything’s friggin’ peachy in Violet-Land.

My hands were shaking; my knees were weak. I heard the roar of blood in my ears and saw the pulse in my vision. My glance darted to the other side of the street where people had lined up to watch the show. Just people, I told myself. A boy nearly gets run down by a sports car and people are going to gawk. Nothing weird about that.

“I’m fine,” I repeated, still taking in deep breaths, still processing everything that had flown by. Did the world actual stop moving? Had I actually just run out in front of a car? Who was that guy that called me Leftovers?

A slight chill ran down my body as the breeze cooled the sweat on my skin. My heartbeat slowed; my pulse less visible. As I turned back at my reflection in the car window, I looked like me again. Just Violet.

The boy’s mother reached out and touched my forearm with cool fingers. “You saved my little boy’s life.”

I turned towards her quickly. I had. I had saved a life. Little Violet Jordan was a hero.

The woman hugged me, smashing the boy between us. It threw me off balance for a moment as her rose perfume assaulted my senses but I patted her back softly. She pulled away and, without meeting my eyes again, headed toward her car. Tomas’s frightful eyes peered over his mother’s shoulder and he stared at me until he was securely fastened into his seat.

The police officer watched silently as I tried to catch my bearings. I didn’t know where home was. There wasn’t a school anywhere near my house. I thought I’d run west, but with all the turns and shortcuts, I couldn’t be sure any more.

“I’ve never seen anyone do that,” the officer said with a smile as he scratched behind his ear, lifting up the edge of his hat.

“Adrenaline, I guess.” I forced a half smile and watched Tomas and his mom drive away.

“You training for a marathon or something?”

“I watched you speed around the corner. It was like a woman with a mission.”

I gulped. “Just running,” I squeaked out.

He nodded and waved to the gathering crowd to disperse. As the people slowly retreated to their cars or back into the school building, five black dogs remained on the sidewalk, panting, staring at me.

Frozen, I stared at the motley group of mongrels. My skin crawled and the space between my shoulder blades tightened, the hair prickling down my neck. They’d found me. My vain attempt to blend into a crowd of schoolchildren three feet shorter than me hadn’t worked as well as I thought and now they were waiting with baited breath.

“Is your ankle alright?”

“My ankle?” I looked down to see a gash just above my ankle soaking my sock with deep red blood. “Where’s my shoe?”

The officer pointed to the middle of the street where my size ten rested like a big white speed bump. “You clipped the front; that’s what made you spin.”

He nodded and looked at the dogs, then back at me. “Do you want me to call you an ambulance?”

I tried to put pressure on my swollen ankle and fire flew up my leg. Not just bleeding, broken. I gulped but tried not to show just how painful it really was. “I’ve survived worse.”

He pulled out a small memo pad from his breast pocket. I almost expected him to lick the tip of the pencil like in the old detective movies, but he didn’t. “Did you recognize the car?”

I could only shake my head; my lips clamped shut. I couldn’t positively identify it as the one that had been parked outside the coffee shop where I spent half my waking moments. I mean there were probably thousands of BMW convertibles in Dallas.

“Press charges? The guy sped off.”

With an unsatisfied sigh, he put the pad back in his front pocket. “Well, I’m going to have to fill out a report anyway, but since you’re refusing an ambulance, can I at least give you a ride home?”

I looked down at the empty street, then at the dogs lined up just waiting for me to be alone again. “That would be great,” I said with a pain-filled smile.

I’d never been in the back of a police car but I could see the odometer from there. As I gave the officer directions, I watched the numbers tick away. Seven miles. I’d run seven miles, saved a boy’s life, and broken an ankle. That was a bit more than my standard afternoon. I longed for the days when I stayed in my office to write my little stories and only ran after ice cream trucks.

We stopped outside my townhouse and the officer rushed around the front of his patrol car to let me out. He offered a hand as I gingerly slid across the vinyl seats and stood on one leg. I looked down the quiet residential street. No dogs. No speeding sociopaths.

“Thank you again.” He closed the door and walked back around to the driver side of the car. “We need more heroes like you.”

I watched as he drove off. Wincing with every uneven step, the walk to my house felt like another mile in itself. As quickly as I could, I found my key, unlocked my door, hobbled inside, and slammed the door shut.

Exhausted, I leaned against the door and slid down to the floor. The sock was a lost cause. I’d forgotten my shoe at the scene of the crime. There was so much pain in my leg I didn’t know if I would ever move from this spot.

Now I had a reason to never leave my house again.

I hate dogs. I hate lost shoes and I really hate exercise.

And thanks to what happened two weeks ago, I’d never enjoy another Cosmo again.

Bullet Work by Steve O'Brien
Spacepaw by Gordon R. Dickson
She Who Finds a Husband by E.N. Joy
Captain Vorpatril's Alliance by Lois McMaster Bujold
The Scent of Lilac: An Arrow's Flight Novella by Casey Hays
The Beauty Bride (The Jewels of Kinfairlie) by Delacroix, Claire
All Over but the Shoutin' by Rick Bragg
A New Darkness by Joseph Delaney
The Listener by Taylor Caldwell
Controlling the Sorority (The Magic Remote Book 2) by Nadia Nightside