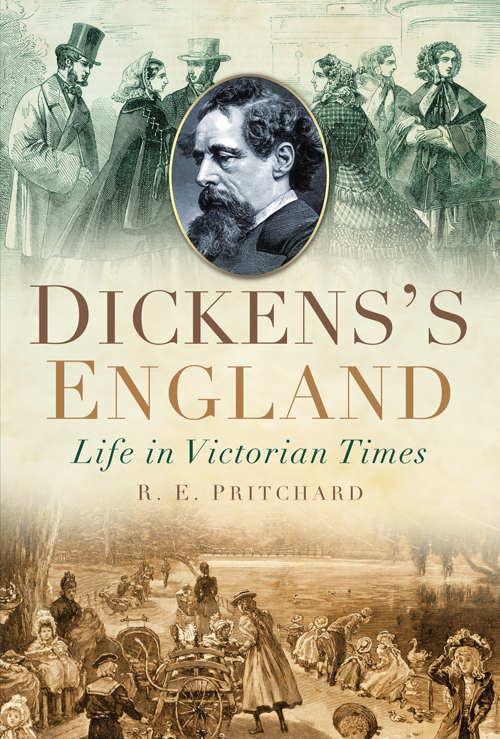 This edition first published in 2009

The right of R.E. Pritchard, to be identified as the Author of this work has been asserted in accordance with the Copyrights, Designs and Patents Act 1988.

It is impossible to put the world in a nutshell . . . we have selected the most striking types, the most completely representative scenes, and the most picturesque features.

I
f Victorian London was too much for Jerrold and Gustave DorÃ© to cope with, the England of Dickens's time was even more varied, too multifarious, mutable and extraordinary to be confined within such an anthology as this. This does not attempt to be a social history of three-quarters of a century, but rather to provide â in Jerrold's spirit â a collection of illuminating and entertaining accounts of the changing life of the times, as observed and interpreted by a wide range of Dickens's contemporaries and by âThe Inimitable', himself one of the major social commentators and critics of the century.

As such, it includes writings from earlier in the century, before Victoria's accession to the throne in 1837 (the year of
Pickwick Papers),
a period that not only shaped Dickens's imagination but provided the foundations for the developments of mid-Victorian England. It also includes some writing from the time after his death in 1870 that deals with the world that he had known; the England of the last quarter of the century was however, as is generally recognised, increasingly unlike early and middle Victorian England, with which this book is mostly concerned.

The subjects touched on include rich and poor, men and women, faith and doubt, entertainment and education, life in the country and in the town, and responses to that strange, un-English world overseas (as Browning wrote, âWhat do they know of England who only England know?'). Excerpts are drawn from popular novels and Parliamentary reports, from serious journalistic surveys to religious disputes and accounts of sports; poems, hymns and music-hall songs reflect the imaginative and emotional responses of the people generally. Each section also has a contextual introduction derived from modern research.

The period was one of change not only in society but in language usage; conventions of spelling, punctuation and grammar changed during the century, as they have since; to avoid unnecessary distraction, spelling and punctuation have usually been modernised (except where this would detract from the effect). Obscure words and phrases have been glossed in the body of the text, in square brackets; these are usually in the writing aimed at a more popular market.

It is worth remarking that at least a quarter of all books published then were religious and devotional works â not adequately represented here. The middle classes patronised circulating libraries and authors less demanding and unsettling than George Eliot or Meredith â the âsilver fork' novel of refined manners was popular; despite âBozmania', Dickens was not altogether respectable. The working classes generally read little, though slowly improving education increased literacy: cheap periodicals and the âcheap and coarse penny novel appearing in weekly parts' (as a contemporary reported) did well â and Dickens's own more mainstream
Household Words
and serial novel publication are well known.

The better nineteenth-century writing generally is vigorous, rich and inventive, less concerned with balance and rhythm â as was the eighteenth century â than with development of vocabulary and imagery. A wide variety of styles is represented here, with writers displaying notable idiosyncracies of expression; while Biblical echoes are frequent, some writers certainly were particularly responsive to urban speech habits, providing striking phrases and lively rhythms. Powerful emotionality, moral engagement, satire and broad humour and, especially, strong responsiveness to the material world abound. Particularly noticeable is a copiousness of language, an accumulation of clauses and adjectives; there is a remarkable particularity and âthinginess' in much Victorian art, whether in the paintings of the Pre-Raphaelites or in Gerard Manley Hopkins's âPied Beauty':

And all trades, their gear and tackle and trim â

or in the catalogues tumbling through descriptions by George Augustus Sala and Charles Dickens, that do so much to bring before us the living and physical detail of the material and social life of the times.

Again and again, through acute observation, vivid detail and imaginative insight, these writers, from the famous to the obscure, give us the feel of what it was like to live in the exuberant, troubling and frequently horrible seventy-odd years of this age, times ostensibly very different from but, underneath, often remarkably like our own.

Comparisons with the past are absolutely necessary to the true comprehension of all that exists today; without them, we cannot penetrate to the heart of things.

Charles Booth,
Life and Labour of the People of London
(1889)

ONE
England and the English

D
ickens grew up in the turbulent reigns of George IV and William IV, the years of the French wars, of the Peterloo Massacre, âCaptain Swing' riots, the Romantic poets. When he died in 1870, England had been transformed: great smoky cities and factories, steam-engines, Gothic churches and neo-medievalism; the dumpy âWidow of Windsor', soon to be proclaimed Empress of India (1876), ruled an empire so extensive that on it the sun had yet to set; the country was the richest in the world.

Nineteenth-century England experienced change â social, economic, political and cultural â to an extent and at a pace never previously known. The population increased rapidly, even overwhelmingly, from a little over 8 million in 1801 to nearly 23 million in 1871; people moved from the country to the towns, and the towns grew: at the beginning of the century, perhaps 20 per cent lived in towns of more than 5,000 people, in 1851, more than half did. Quite apart from London, âthe great Wen', the new industrial conurbations of the north and Midlands grew particularly quickly, with great mills, sprawling slums (so profitable for the landowners) and impressive public buildings. The industrial inventions of the late eighteenth century now bore fruit in the spectacular increase in the production of coal, iron, steel and textiles â especially cotton. Over the century, coal production increased by twenty times, pig-iron by thirty, and total industrial production quadrupled.

Railways, built by thousands of navvies powered by beef and beer, transformed the towns and landscape, with great termini, tunnels and viaducts, and hundreds of miles of line to almost every town in Britain, accelerating the rate of industrial, commercial (and social) development that led to Britain's economic and political dominance (by the end of the 1870s, Britain had 38 per cent of world trade in manufactures). However, not having been overrun by Napoleon, Britain was now less part of the European âcommunity' as regards laws, administration, systems of measurement, and general ethos; but it had a reputation as the home of liberty.

This liberty went with a gross maldistribution of wealth and political power that was modified only slowly and with great struggle. Early in the century the traditional aristocracy was wholly dominant â 44 men each owned more than 100,000 acres; 3,000 gentry each owned between 3,000 and 10,000. A successful barrister might make Â£5,000 a year, the average country clergyman received Â£400, moderately successful shopkeepers and businessmen earned Â£250, a copying clerk about Â£75; a farmworker might get 8 or 10
s
a week. Parliamentary seats, controlled by wealthy landowners, were for sale, and distributed in accordance with landowning rather than middle-class manufacturing interests and population movements: in 1801, while lightly-populated Cornwall had forty-two borough MPs, Yorkshire had twenty-six, and Birmingham, Manchester, Leeds and Sheffield had none â not that many men could vote, anyway. The Reform Act of 1832, a modest victory for the middle classes, doubled the electorate to 1 million and redistributed some seats â Manchester and Birmingham got two MPs each. Other movement for political reform made little, or slow, progress: the working-class Chartist movement was suppressed, and eventually failed through lack of leadership and middle-class support. Nevertheless, the Reform Acts of 1867 and 1884 increased the electorate to 60 per cent of men in towns, and to 70 per cent in the country.

The 1830s and 1840s were desperately bad times for the working classes, overworked, underpaid, badly fed, housed and clothed, whether in the mills or on the farms; however, conditions did improve, driven by Christian concern, an increasing sense of government responsibility and, in the first half of the century at least, fear of revolution. Within a few years society felt itself more stable, with a growing sense of confidence in progress â intellectual, industrial and scientific (for example, medical anaesthetics, Bessemer's steel processing, the electric telegraph). Prince Albert's Great Exhibition of 1851 was an enormous success, with 6 million visitors from all classes.

By the third quarter of the century, the economy was remarkably strong, varied and complex, developing into a wide range of manufacturing, with steam engines, machine tools, shipbuilding, and small manufactured goods from Sheffield cutlery to Masefield's âcheap tin trays', while the City and financial services became increasingly important (so masking the first indications of the coming decline in industrial output and success). The middle classes â sober, industrious and earnestly Protestant â were increasingly doing well; life for the working classes was starting to improve (leisure, entertainment and education were becoming more available; wages increased and food was cheaper); manners changed, as men's clothes became darker and their beards heavier, and society became more disciplined, decorous and respectable â what many people think of as âVictorian'.