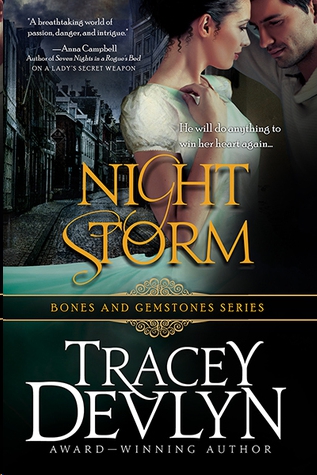 A Bones and Gemstones Novel, Book 1

A promising young apothecary picks up the pieces of her life, only to collide with the ruthless thief-taker who once shattered her dreams and her heart.

When the love of his life chose an apprenticeship in Scotland over his marriage proposal, thief-taker Cameron Adair buried himself in his work—building an unmatched network of underworld spies. Forged by his reputation as a ruthless, greed-driven businessman, he has amassed a fortune. But he has one vulnerable spot in his armor—a brilliant, green-eyed apothecary, who continues to haunt his heart. When a murder investigation brings him back into contact with Charlotte Fielding, Cameron sets aside the past to find a killer and to distract a headstrong apothecary, clue by clue, kiss by kiss.

Cover Design by Jeannie Ruesch, Will Design for Chocolate

No part of this text may be reproduced, transmitted, downloaded, decompiled, reverse engineered, or stored in or introduced into any information storage and retrieval system, in any form or by any means, whether electronic or mechanical, now known or hereinafter invented—except in the case of brief quotations—without permission in writing from its publisher, TDC Creations, Inc.

This is a work of fiction. Names, characters, places, and incidents either are the product of the author’s imagination or are used fictitiously, and any resemblance to actual persons, living or dead, business establishments, events or locales is entirely coincidental.

To Adrienne and Kelsey—

Thank you for taking this journey with me. Couldn’t have done it without you.

Thank you for selecting
Night Storm.
From the moment I wrote Cam and Charley’s short scene in
A Lady’s Secret Weapon
, I knew I had to explore why these two seemed so uncomfortable in each other’s presence. What a surprise to learn they would get their own romantic mystery series!

While researching this novel, I could find no evidence of female apothecaries (or apothecary-surgeons) during the Regency. But I believe much of our true history never reaches the written page. Women tend to be caretakers by nature. To say with absolute conviction that no female apothecaries existed in the early 1800s, stretches my belief system.

What if no one had ever written about Cleopatra, Joan of Arc, Florence Nightingale, Rosa Parks, Jane Goodall, Malala Yousafzai, and so many more?

If no one had written about these courageous, trailblazing women, would we claim they never existed? Never touched the lives of thousands of people?

I believe history is full of women and men who stepped outside of society’s confining box to make a difference. Plus, one of the reasons we love fiction is to escape to a different world. In my Bones and Gemstones world, a woman can be an apothecary-surgeon in 1804 London.

“Mrs. Fielding, which of these would be better for a putrid stomach?” Piper Scott stood holding up two stoppered glass containers—one containing mint and the other wild marjoram.

Apothecary-surgeon Charlotte Fielding set down her pestle, satisfied the paste she had made of snakeweed root, pellitory of Spain, and burnt alum was of the right consistency. All she needed to do was add a little honey and it would be ready for Mrs. Taylor’s aching tooth.

Transferring her attention to her assistant, Charlotte couldn’t help but wonder—for the hundredth time—how Piper managed to stay so put together all the time. Unlike the dark brown wisps framing Charlotte’s face, not a single strand of her assistant’s obsidian-colored hair ever escaped the neat pile atop her head. And if that weren’t bothersome enough, a long, delicate neck supported the heavy mass, and intelligent, emerald green eyes framed by thick, black lashes completed the assemble to perfection.

Instead of jealousy, Charlotte experienced a twinge of pride every time she peered at her beautiful, tidy assistant. Because apothecary apprenticeships were normally reserved for men, Charlotte referred to Piper as her assistant rather than her apprentice. Something she’d had to do herself five years ago in order to work with a renowned, open-minded apothecary-surgeon in Scotland. Having completed only two years of her five-year apprenticeship, Piper continued to doubt the soundness of her own knowledge. “Which one would you choose, Piper?”

To help build her assistant’s confidence, Charlotte had begun encouraging her to work through a solution, utilizing her store of information. As an apprentice, Piper still had much to learn, but Charlotte’s new tactic appeared to be meeting with much success.

The smooth plane of her assistant’s nineteen-year-old forehead bunched in concentration as she studied the two bottles. Each carried Charlotte’s distinctive
C. B. Fielding—Apothecary
label and pictorial of a mortar and pestle framed by an herb sprig and surgical knife, with the initials
CF
emblazoned on the side. Adding the small crest to the label had been Piper’s idea, but Charlotte found herself adoring the small symbol—it represented both her independence and her profession. In fact, she was planning to redesign the plain shingle outside her shop to include the crest.

Charlotte considered her assistant. She could almost hear the battle raging in the girl’s brilliant mind, weighing the pros and cons of each treatment. Cross-checking what she’d read in herbal tomes with what Charlotte had taught her. Piper carefully considered every decision when it came to their customers. She wanted to provide the very best care for each one. A quality that would one day make her a successful apothecary.

“Mint can be quite effective with the right dosage, though wild marjoram is known for strengthening the stomach,” Piper said.

“Did you check his treatment history card for prior adverse reaction to either remedy?”

“Yes. Nothing was listed.”

“What does that tell you about either option?”

“Both are good choices. However, marjoram might be the better remedy.”

Charlotte smiled. “Indeed, it is.”

“You did all the work, Piper.” Charlotte turned back to her work and added a precise measurement of honey to the paste she was preparing for Mrs. Taylor. “Is Felix still about?”

“He’s across the street at the lending library, attempting to repair Mr. Anderson’s counter,” Piper said. “Do you need him?”

“No, it can wait. I want him to drop off this prescription to Mrs. Taylor before he leaves for the day.”

Not long after Piper’s apprenticeship began, her drunken father had stumbled out of their house and never returned, leaving Piper, Felix, their little sister, and mother to fend for themselves. The wages her mother made as a seamstress were barely enough to keep a roof over the family’s head let alone feed growing children. The situation had broken Charlotte’s heart, and she had offered Piper’s then-fourteen-year-old brother, Felix, a job so he could help out with the family’s expenses. Felix ran errands for Charlotte, made minor repairs, unloaded supplies, delivered prescriptions, and kept the shop tidy. The arrangement with the two siblings had proven to be as much a godsend to Charlotte as it was for the Scott family.

During the last six months of her own mother’s life, Charlotte’s father had spent more time caring for his wife than in the apothecary shop filling orders. Neither George Fielding’s apothecary abilities, nor her mother’s midwifery experience, could halt the inevitable. To this day, Charlotte couldn’t imagine how her father, with all his apothecary skills, survived the anguish of knowing he could not save his wife from the terrible wasting disease. The two had loved each other fiercely, all the way to the end and that provided Charlotte with some comfort.

A wave of guilt settled in the pit of Charlotte’s stomach. Had she known the severity of her mother’s illness, she would have cut short her apprenticeship in Edinburgh. Her father had called in several favors so Charlotte could apprentice with the legendary apothecary-surgeon Angus Buchanan and, according to her father, her mother was determined that her daughter make the most of it.

Her mother had adamantly refused to allow her husband to summon Charlotte home until just a few weeks before she died. Both her parents felt that combining midwifery training under her mother with Buchanan’s apothecary-surgeon apprenticeship would give Charlotte the best chance to support herself if ever she needed it in the future. Who knew the future would come so soon?

If only Charlotte could have had one last day with her parents. Just the three of them chatting about her studies in Scotland and gossiping about the shopkeepers in the Covent Garden neighborhood. No pain, no impending death, no failing business. Only laughter, embellished stories, and maybe several long, hard hugs.

By the time she’d returned home, her mother was spending most of her time either sleeping or incoherent with pain. Charlotte would never forget the first evening she sat at her bedside. She’d smoothed her hand over her mother’s damp forehead and choked out, “Mama.” Her mother’s eyes had opened, and she smiled at the sight of her. She’d whispered Charlotte’s name, a beautiful sound Charlotte hadn’t heard in three years. Then pain had spiked through her body, forcing her frail frame into a tight, quivering ball. Charlotte’s heart had bled at the sight of the lone tear that had trailed over the bridge of her mother’s nose and soaked into her white linen pillow. That was the last time she heard her mother speak.

After the funeral, her father had helped her stabilize the business and smoothed the way for her to operate the shop on his behalf before going to live with his brother in the country. At first, Charlotte hadn’t been certain whether or not his customers would accept her. But most knew her, and her story, and liked having an apothecary shop nearby, one that had served the community for nearly three decades. To her surprise, their regulars never blinked an eye at referring to her as “Mrs. Fielding”—her father’s suggestion. Somehow, she thought he had something to do with their acceptance, though George Fielding denied any involvement.