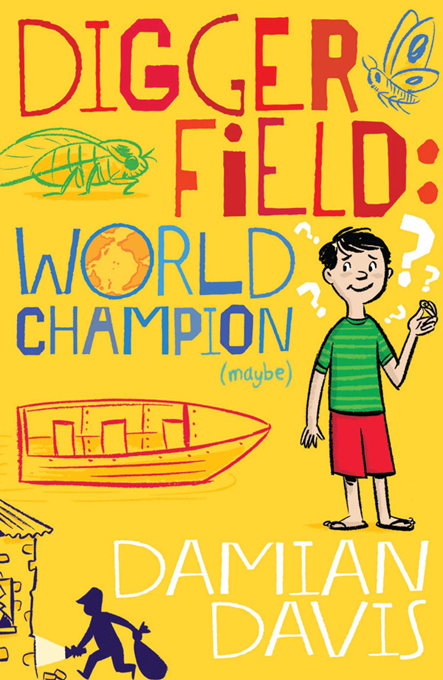 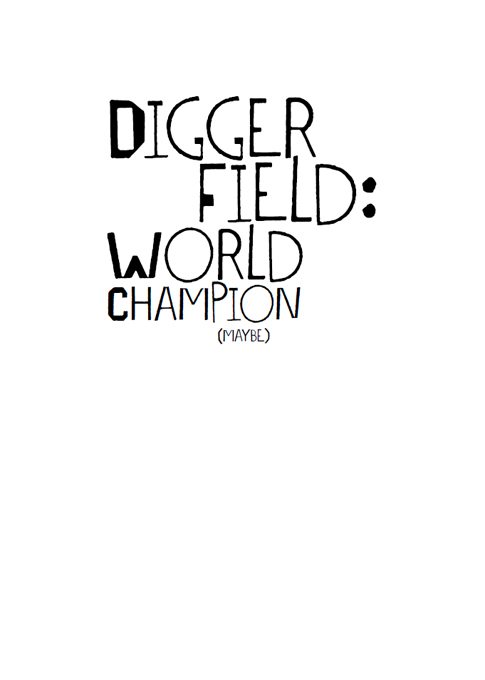 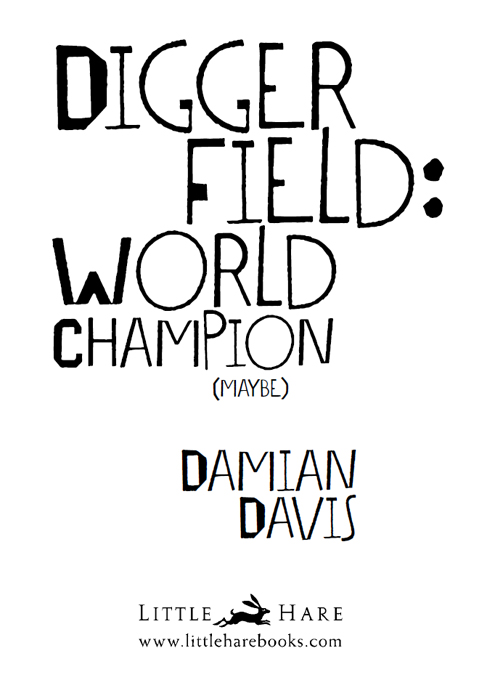 All rights reserved. No part of this publication may be reproduced, stored in a retrieval system or transmitted in any form or by any means, electronic, mechanical, photocopying, recording or otherwise, without the prior written permission of the publisher.

For Georgia,
For Oscar,
For Sally,
With love.

HOW TO SKIM A STONE

Last day of school. I’ve got a plan.

There’s a kid in my class who’s been invited to sing at the Opera House. That’ll never happen to me.

Y’know how I know? Because I got kicked out of the school choir in the middle of the end-of-year concert. I was belting out the national anthem when Ms Wilson stopped the choir and kicked me offstage. Right in the middle of the chorus. And it was in front of six hundred parents. Two of them were mine. Mum said she had never been so embarrassed.

I can’t do anything well. I guess that does make me extraordinary in a way. But not really in a way you’d want. Extraordinarily lame. So I’m going to do something to change all that. I’ve got a plan that will make me stand out from the pack.

By the end of these summer holidays I will be the rock skimming champion of the world. Skimming is throwing a rock so it skips across the surface of the water.

My name is Digger Field. Well, not really. My name is David Field, but for some reason I’ve always been Digger.

My Mum is Polish and my Dad is a dag. We live a couple of streets away from the Clarry River in the most boring suburb in the world. It’s called Pensdale. Nothing ever happens here.

I have two brothers, Dean and Squid.

Dean is fourteen. I’m eleven. The only thing we have in common is that we’ve been at war with each other all my life.

He looks more like a stick insect than a human. He’s all arms and legs. Even if you can work out where his face is, you can’t really see much through the pimples. We share a room and I can hear him scratching his zits all night. It’s gross.

Squid is five going on six. He has the biggest head in the world. It’s so big it’s amazing he doesn’t faceplant every time he walks. He’s got a mop of curly brown hair that looks like a wig and he talks with a lisp that makes him sound like a three-year-old. For some reason people say he’s cute. People are stupid.

Me and my best mate Wriggler skim rocks every afternoon on the river on our way home from school.

There’s an art to it. I’m a natural. Wriggler isn’t. My record is twelve skims. He’s lucky to make three. I can’t tell him he’s hopeless because he’s my best mate and I need someone to hang around with all holidays. Besides, it’s good to watch someone who is more hopeless than me. And also, he’s got a video camera.

I’ve worked out that if I can improve by one skim every day I will get to fifty by the end of the holidays. All I need to do is have two really good days when I improve by two and the record will be mine.

Tomorrow is day one of the countdown to me becoming world champion.

The first day of the big world-championship attempt.

Where we skim is on a couple of empty housing blocks next to the Clarry River. One block is covered in weeds. The other’s got an old falling-down house on it.

The river is so muddy that it’s brown, not blue. And the mud really stinks at low tide.

A few boats go up and down the river, mainly old guys fishing or water-skiers going past. They are coming from the coast, where the river is deeper and wider. Down there, the houses are bigger and nicer and the people are richer and younger. Out here in Pensdale, the houses are made out of fibro and wood and the people are poorer and older. On a hot day Pensdale is like a sauna.

Elite sportspeople need to warm up. Before we started Wrigs and I did some leg stretches, neck rolls and half-a-dozen one-handed pushups. Well, I did the push-ups. Wrigs just lay on the ground doing his best impression of an oversized red-headed blue-tongue lizard.

If you want to be a world champion rock skimmer, it’s important to find the right stone to skim with. You need the flattest one you can find. It should fit in between your thumb and your index finger. To skim, you peg it sidearm, as hard as you can, and see how many times you can make it bounce across the top of the water. The trick is to throw it as flat as possible so, by the time it hits the water, it’s still flying flat. That’s what makes it skip along the surface instead of sinking.

On my first throw I got thirteen skims. This world record is going to be a cinch.

Wriggler tried out a new technique. Every time he released a stone he grunted like a tennis player. He started with a simple ‘
Aagggh!
’ Then he moved onto ‘
Aaoooeeee-ah!
’ Then, ‘
Graa-aa-ee-agh!
’

He said that yelling sucked all the air out of his lungs and pushed the strength to his arms. He could be right because that’s how he got his record.

Just as he let go of his eighth throw he yelled so loud I thought my eardrums would burst. He also let out the hugest fart you’ve ever heard. He got nine skims. I fell over laughing.

If he perfects the grunt’n’ fart technique he’ll get to fifty-two skims and become world champion instead of me.

The rock skimming attempt is not our first crack at a world record. We tried for a different one a few years ago when I was eight. Eight years, three hundred and sixty-four days, twenty-three hours, fifty-nine minutes and fifty-nine seconds to be exact.

I had worked out that I was going to be the world’s oldest eight-year-old. I had to be. A second later and I would be nine. It would be impossible to be any older and still be eight.

I was born at 4.38 in the afternoon. On my ninth birthday Wriggler borrowed his mum’s camera and a digital clock. We worked out what the delay was between Wriggler pressing the button and the camera taking the photo.

We had to time it perfectly for the record attempt to work. I stood looking at the camera, holding the clock close to my face so you could read the time. At precisely 4.37.58 and a half Wriggler took the photo and I smiled. Then he took another one, just to be sure.

Guinness World Records have never got back to me.

Days to becoming world champion: 37 (If Dean doesn’t stuff it up for me.)

Today was a disaster.

My big brother Dean is the biggest dropkick of a disappointment of an excuse of an embarrassment of a brother that you could ever have.

He was supposed to look after my little brother Squid when Mum went to work. But the moment Mum left the house Dean picked up his surfboard.

‘Where are you going?’ I asked him.

‘You’re supposed to be looking after Squid.’

Dean just ignored me and loped out the front door.

I’ve started a list of all the things he does so I know how not to be an annoying teenager when I get there.

When Wriggler came around to go skimming I had to say training was off. Mum would kill me if I took Squid to the river. She reckons by the time I noticed he was missing he’d already be bobbing out to sea.

‘What are we gonna do about the world championship?’ Wriggler said.

‘Y’know, it’s good for top sportspeople to have days off,’ I told him. ‘Good for their bodies.’

‘What do they do on those days?’

‘Y’know, stuff. Stuff they can sell.’

Wriggler thought for a moment. ‘You mean like jerseys and balls and all those things they put their own names and photos on?’

‘Yeah, they make a fortune out of them.’

Wriggler and I are looking for ways to make money. We’re desperate to buy my uncle’s boat. Uncle Scott wants to sell his three-and-a-half metre tinnie with a 7.5 horsepower outboard motor. If me and Wriggler could buy the tinnie we would never be bored in the holidays again. We’d go wakeboarding, fishing and crabbing. And, best of all, there’s a national park on the other side of the river that we could explore by ourselves.

The tinnie is worth thirteen hundred dollars but Uncle Scott said he’d sell it to us for seven hundred and fifty. That’s five hundred and fifty dollars we’d save. The only problem is that Uncle Scott wants to start a mobile coffee business called ‘Coffee with Scotty’ and he needs the cash to fit out his van. He can only wait until the end of the holidays before he puts the tinnie on eBay. So far we’ve only made fifteen dollars.

‘Let’s invent a sports drink,’ I said to Wriggler. ‘We’ll make a zillion.’

All we had to do was work out what goes into a sports drink. Wriggler thought it was lemonade, sugar and a bit of food colouring.