The Seduction of Sophie Seacrest 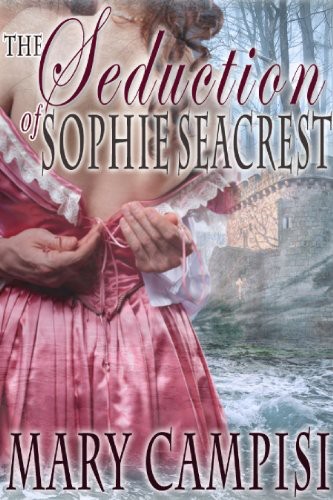 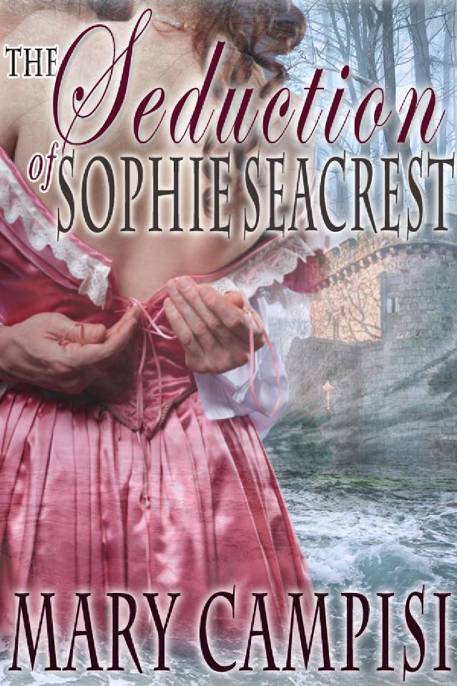 When Holt Langford, the new Earl of Westover,
returns to England after twelve years at sea, he resembles more
pirate than nobleman, a far cry from the scrawny youth shipped off
by his father to become a man. No one recognizes him and he’ll use
this anonymity to enter a game of subterfuge in order to expose the
scoundrel who has vowed to destroy Holt’s family business.

Unfortunately, that scoundrel has a devoted
daughter - Sophie Seacrest. Sophie can’t deny her attraction to the
unorthodox stranger who stirs her blood and makes her think things
no proper lady should. Holt and Sophie are drawn into a seductive
tangle and just when he’s about to reveal his true identity
and
his honorable intentions, she discovers the truth and
must choose between love and family duty.

The Seduction of Sophie
Seacrest

An Unlikely Husband Series –
Book One

Published by Mary Campisi at Smashwords

The Seduction of Sophie Seacrest is a work of
fiction. Names, characters, and situations are all products of the
author’s imagination and any resemblance to real persons, locales,
or events, are purely coincidental.

Discover other titles by Mary Campisi at:

This ebook is licensed for your personal enjoyment only. This
ebook may not be re-sold or given away to other people. If you
would like to share this book with another person, please purchase
an additional copy for each recipient. If you’re reading this book
and did not purchase it, or it was not purchased for your use only,
then please return to Smashwords.com and purchase your own copy.
Thank you for respecting the hard work of this author.

To Mr. Darcy, the perfect hero.

The Seduction of Sophie
Seacrest

Amidst the openly curious stares of the
servants, the tall, dark-haired man entered the Langford mansion.
His dusty clothes were travel worn and not at all in keeping with
current fashion. Or any fashion for that matter. He wore a
sweat-streaked lawn shirt unbuttoned partway across a most
expansive chest to reveal a thick pelt of black hair. A ruby
medallion hung from his neck, drawing one’s immediate attention to
it, though whether the attraction was the brilliance of the piece
or the location on the center of wearer’s broad chest, could not be
determined.

The stranger possessed an aristocratic face
despite the grime and sun-battered effects covering his skin. If
one could sift past the initial shock of the black-haired ponytail
and the glint of gold hoop in the man’s left ear, one might note
the high cheek bones, the straight nose, the full lips, the
arrogant stance that befit the upper class. One might notice many
things. If one were able to look past the obvious.

Jason Langford entered the hallway, caught in
the ruckus that had interrupted his reading and had every
employable female at Ellswood lined outside the library doors
squawking louder than a gaggle of geese on a hunt.

Did you see those legs?

And that chest? I could bury myself in
it.

I was thinking he’d be doing the burying.

Maybe he’s come here to ravage us all.

And just as strong.

“Julia!” Jason spotted his sister pressed
against the wall between two scullery maids. “What
are
you
doing?”

A rush of pink swept her cheeks and she
darted a gaze in the direction of his boots. “Nothing.”

“Julia.” He loved his little sister but she
tried his nerves most days with her excessive energy and contrary
opinions, the latest being her steadfast refusal to even consider a
Season. How was he supposed to find her a suitable match, not that
he wanted to marry her off this very instant, but at some point he
would like to see her settled.

“I’ve done nothing wrong.” She turned to the
woman on her right. “Have I, Jane?”

“No, Lady Julia, not one blasted thing.”

Julia championed a broad smile in his
direction. “There, you have it on good authority.” She stood on
tiptoe and whispered in his ear, “Is the stranger in the library
really a pirate?”

Jason sighed and rolled his eyes. “No, he’s
not a pirate.” Pirates did not present themselves on a gentleman’s
doorstep at tea time. Did they? Pirates clamored about on the docks
and in the pubs of London’s south side, not in the libraries of
country estates. Didn’t they?

“May I meet him, too?” Her gray eyes
glistened with just a bit too much excitement for Jason’s
liking.

“No. And you should not be listening to such
tall tales, either. Now go and wait in your room. When I’ve
concluded business with the person in question, you shall be the
first to receive the details.” He turned on his heel and headed for
the library before she could barrage him with a mouthful of
complaints. Julia always had an opinion and was forever of a mind
to share it. God help him, she would indeed end up a spinster if
she didn’t soon learn to curb that tongue of hers. Then again,
perhaps that was her plan. He entered the library, reminding
himself to speak with her this evening about the dangers of
sabotaging her future.

The man pacing near the fireplace paused when
he entered. He was older than Jason, taller, broader, darker, with
piercing eyes which for some bizarre reason were oddly familiar and
not a little disconcerting. Jason drew himself up to his full six
feet, still a few inches shorter than the other man, and attempted
to regain control. "How may I be of service to you?"

The stranger’s mouth twitched at the corners.
“I could use a whiskey."

Jason chose this diversion to collect his
thoughts. If the man were here to ransom one of the Langford fleet,
what would prevent him from returning in two month’s time seeking
ransom for yet another ship? Langford Shipping had suffered enough
destruction at the hands of that damnable Rendhaven these last
several weeks and a barrage of ill-intentioned activities from yet
another source would prove quite costly. The situation must be
dealt with in such a manner as to prevent any thought of
recurrence. But in God’s name how? Those damnable eyes unsettled
him. What color were they anyway? Black? Brown? "Who are you and
what do you want? You have half this household no doubt with their
ears to the door and the other half awaiting a report. I buried my
father two months ago and I will not have another upheaval in my
life. State your business so we may get on with it."

"But that is
exactly
why I have come.”
The dark eyes turned even darker. “
Because
your father
died.”

Jason ignored the man’s insolence. “How much
do you want?”

“You’re ransoming one of our ships, aren’t
you? How much are you asking to release it?”

Before the man had a chance to reply, the
library door burst open and Julia flew in on a whirl of pink and
white. The stranger devoured her with those damnable eyes, and not
for the first time since he’d entered the room, Jason considered a
punch to the man’s jaw.

Who would not think Julia beautiful with that
mass of golden hair curling down her back and those clear gray
eyes? Not to mention other womanly attributes which a brother
chooses to ignore. But non-relative males were incapable of
ignoring his little sister, and this one was no different, pirate
or not.

“Julia! Did I not specifically request you
remain in your room?” The stranger’s interest in his sister
disturbed him. Best to get her safely sequestered in her quarters
before the man developed a notion to add Julia to his booty.

She dared a glance at the stranger before
addressing Jason. “I could not resist the commotion.” She moved
toward the stranger, eyeing him boldly. He returned the look. Julia
then scrutinized every detail of the man, from his dark eyes to his
muddied boots. As if not comfortable with her conclusion, she
circled him and began her inspection once again. “Holt,” she
whispered, “is it really you?”

“Julia! What are you doing?”

Of course, she ignored him. “Are you
him?”

“Stop this at once.” Jason turned to the
stranger and said, “My sister thinks you remind her of our brother,
which is the most ridiculous bit of nonsense I’ve ever heard.”

“He does remind me of Holt.”

Was she joking? The brother he remembered was
scrawny and pale, nothing like this monster of a man standing
before them. Holt indeed.

“It’s in the eyes.” She inched closer and
squinted. “A rich navy, like Father’s.”

“What the hell are you talking about?” Holt
would never present himself with such arrogance. And the pirate
outfit? The closest his brother had come to a pirate was in the
adventure books he devoured as a young boy.

The subject of their conversation crossed his
arms over his broad chest and replied in a bland tone, “Would you
like me to open my mouth so you may inspect my teeth as well?”

“No,” Jason said, determined to end the
charade. “But I would like to see your right shoulder.”

A half smile shifted over the stranger’s
face. “Of course.” He unbuttoned his shirt and eased it from his
shoulders. Julia gasped. Three jagged lines of silver flesh gouged
the man’s right shoulder. It had healed badly, the skin puckering
in uneven gaps, stretching to cover flesh that had been ripped
away.

Jason remembered the incident. Every sordid
detail. One did not forget wounds inflicted on one’s brother by
one’s own father. He moved closer and studied the man before him.
It had been twelve years since Holt was sent away, a mere eighteen,
scared and angry his father chose to ship him to the West Indies
like a crate of sugarcane. “I never thought to see you again.”
Jason smiled and pulled his brother into a fierce embrace.

“Could you find room for one more? It was I,
after all, who recognized my big brother.” Julia placed her arms
around their backs and hugged them.

“God man, what happened to you?” Jason eyed
his brother’s broad chest and thick-muscled arms. “The last I saw
you I believe you weighed less than Julia.”

“And I do believe the hairs on your chest
numbered less than ten,” he paused and added, “and your face had
even fewer.”

Holt shrugged. “The warm climate agreed with
me.”

Jason laughed. “This calls for a celebration.
The new Earl of Westover has returned.”

Holt frowned. “They’ll be no
announcement.”

“Of course there will be,” Julia insisted.
“We’ll have a grand party and everyone will attend.”

Jason’s patience shrunk to a tiny dot. “In
God’s name, why not?”

“I may not remain in England. Actually, I
find the possibility rather doubtful.”

It was Jason’s turn to frown. “You can’t mean
that. You’re the new earl.”

“You can’t leave us.” Julia laid a hand on
his broad arm and peered up at him. “Jason and I have been alone
for so long and these last years were particularly difficult.”