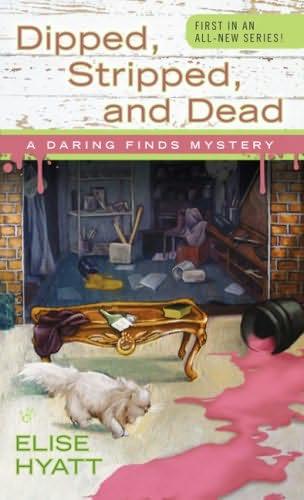 Table of Contents
Title Page
Copyright Page
Dedication
Acknowledgements
CHAPTER 1 - One Woman’s Trash
CHAPTER 2 - A Table in Hand
CHAPTER 3 - Two Ciphers
CHAPTER 4 - And a Scribble
CHAPTER 5 - The Chamber of Horrors
CHAPTER 6 - Hanging
CHAPTER 7 - The Law
CHAPTER 8 - The Bright Eyes of the Law
CHAPTER 9 - Run, Baby, Run!
CHAPTER 10 - Creative Destruction
CHAPTER 11 - Gentleman Caller
CHAPTER 12 - The Trials of Friendship
CHAPTER 13 - Night Drive
CHAPTER 14 - Broken, Searched, Sprayed
CHAPTER 15 - The Fledgling Returns
CHAPTER 16 - Dipped
CHAPTER 17 - The Protection Racket
CHAPTER 18 - Broken Links
CHAPTER 19 - Devil with a Blue Dress On
CHAPTER 20 - Lye, Lady, Lye
CHAPTER 21 - Masculine Wiles
CHAPTER 22 - The Better to Eat You With
CHAPTER 23 - In the Still of the Night
CHAPTER 24 - In the Cool Morning Light
CHAPTER 25 - Once More into the Lye Vat, My Friends
CHAPTER 26 - Who’s Afraid
Furniture-Refinishing Tips and Tricks
A Deadly Dumpster Dive
Slowly, very slowly, afraid that I was going to fall, I stepped down, climbing down from the Dumpster and to the asphalt of the parking lot.
There was a buzzing from my ears. Through it, I vaguely heard E say, “Mom?”
I shook my head, wanting to get in the car and drive him away from all this. But this was real life. One didn’t drive away from something like this. An inner voice encouraged me to just run. After all, it said, I was wearing gloves. There would be no fingerprints.
But someone might have seen the car. And besides, I watched TV. I knew the police had ways of figuring out things these days, even without fingerprints.
I opened my car door deliberately, as though each movement might cause an explosion. Which it very well might. It might cause me to throw up and that would be explosion enough.
I dropped to sitting on the driver’s side and reached over to the floor on the passenger side, where I’d left my purse. I grabbed the cell phone, swallowed, and dialed 911. I heard my own voice, thickened and strange. “Police,” I said, “I want to report a murder.”

THE BERKLEY PUBLISHING GROUP
Published by the Penguin Group
Penguin Group (USA) Inc.
375 Hudson Street, New York, New York 10014, USA
Penguin Group (Canada), 90 Eglinton Avenue East, Suite 700, Toronto, Ontario M4P 2Y3, Canada (a division of Pearson Penguin Canada Inc.)
Penguin Books Ltd., 80 Strand, London WC2R 0RL, England
Penguin Group Ireland, 25 St. Stephen’s Green, Dublin 2, Ireland (a division of Penguin Books Ltd.) Penguin Group (Australia), 250 Camberwell Road, Camberwell, Victoria 3124, Australia (a division of Pearson Australia Group Pty. Ltd.)
Penguin Books India Pvt. Ltd., 11 Community Centre, Panchsheel Park, New Delhi—110 017, India Penguin Group (NZ), 67 Apollo Drive, Rosedale, North Shore 0632, New Zealand (a division of Pearson New Zealand Ltd.)
Penguin Books (South Africa) (Pty.) Ltd., 24 Sturdee Avenue, Rosebank, Johannesburg 2196,
South Africa
Penguin Books Ltd., Registered Offices: 80 Strand, London WC2R 0RL, England
This is a work of fiction. Names, characters, places, and incidents either are the product of the author’s imagination or are used fictitiously, and any resemblance to actual persons, living or dead, business establishments, events, or locales is entirely coincidental. The publisher does not have any control over and does not assume any responsibility for author or third-party websites or their content.
PUBLISHER’S NOTE: Neither the publisher nor the author is engaged in rendering professional advice or services to the individual reader. The ideas, projects, and suggestions contained in this book are not intended as a substitute for consulting with a professional. Neither the author nor the publisher shall be liable or responsible for any loss or damage allegedly arising from any information or suggestion in this book.
DIPPED, STRIPPED, AND DEAD
A Berkley Prime Crime Book / published by arrangement with the author
PRINTING HISTORY
Berkley Prime Crime mass-market edition / October 2009
Copyright © 2009 by Sarah Hoyt.
All rights reserved.
No part of this book may be reproduced, scanned, or distributed in any printed or electronic form without permission. Please do not participate in or encourage piracy of copyrighted materials in violation of the author’s rights. Purchase only authorized editions.
For information, address: The Berkley Publishing Group,
a division of Penguin Group (USA) Inc.,
375 Hudson Street, New York, New York 10014.
eISBN : 978-1-101-14519-7
BERKLEY
®
PRIME CRIME
Berkley Prime Crime Books are published by The Berkley Publishing Group,
a division of Penguin Group (USA) Inc.,
375 Hudson Street, New York, New York 10014.
BERKLEY
®
PRIME CRIME and the PRIME CRIME logo are trademarks of Penguin Group (USA) Inc.

To Amanda Green, Kate Paulk, and Sean Kinsell who kept me what passes for sane around here while finishing this book. Without them the book, not to mention the author’s mind, might not exist.
Acknowledgments
I’d like to thank my editor, Ginjer Buchanan, for work above and beyond the line of duty on this manuscript.
CHAPTER 1
One Woman’s Trash

When I was little, I was going to be a ballerina. This
was a strange ambition for a five-year-old who could trip over both feet at the same time while standing still. As soon as that tragic fact dawned on me, I settled on the more attainable ambition of becoming a lion tamer. This, at least, seemed perfectly within my reach, because my cat always did exactly what I wanted her to—well, except when she balked at jumping through the lighted hoop. Which is just as well, because Mom didn’t exactly approve of my setting fire to her quilting frame. With the quilt in it.
In the aftermath of the fire-in-the-living-room incident and subsequent grounding, I’d regretfully dropped the lion-taming ambition—probably good, because Fluffy wouldn’t come near me anymore, though her fur did grow back—and with it all my hopes of a career in the performing arts.
A failure at age six, my ego crushed, I’d actually been weak enough to consider Dad’s lifelong ambition of having me grow up to become a private eye. Except that I wasn’t absolutely sure what a private eye was—it seemed
to me you’d have to go around with your hands over your eyes to prevent anyone from seeing them and . . .
Well, that also didn’t go well. And my
Little Investigator’s Kit
, which Dad bought me, didn’t provide me with many clues. I spread the fingerprint powder over the cat, finger-painted with the ink pad, and used the magnifying glass to start a fire in the leaf pile in the backyard.
After the fire department had been by and we’d found Fluffy cowering under the azalea bushes at the far end, I thought that this private eye thing was by far too hazardous.
And this is how I never quite figured out what to be when I grew up.
Which probably explained why, at age twenty-nine, I had parked at the edge of the Goldport College campus and was rummaging through a Dumpster.
Okay, it wasn’t exactly as dire as Mom had always said it would be. I wasn’t living on the streets. I still had all my teeth—even if there had been some doubt about that when I went flying from my bike at age eight, after riding down Suicide Hill with no hands—and I wasn’t looking for food.
Well, at least I wasn’t
exactly
looking for food, only for the stuff that allowed me to make a living. Because, after waffling through two years as an English major (until the word
postmodernism
could put me to sleep like a hypnotic suggestion) and a year as a teaching major (before I remembered that another name for hell was
school-room full of kids
) and a year in pre-law (before I realized I just didn’t have the required forked tongue), I’d left college with an MRS degree.
And when
that
exploded in my face—worse than the quilting frame—I’d found myself as at a loss for what I wanted to do with my life as I had been at six, when my hopes of lion taming had been so cruelly dashed.
Only no longer was it a career, or a matter of keeping myself amused, or even feeling like a productive member of society. No. My marriage to Alex—All-ex, completely ex, he couldn’t be more ex if I killed him, something I was tempted to do twice a week and four times on Sundays or whenever we had any interaction—Mahr, though otherwise completely unproductive, had left me with a child.
Enoch (his father had chosen the name because he thought it sounded solid; I called him E because I hoped to save on therapy bills when he grew up) had been one year old when his father and I got divorced. His primary interests in life had been attempting to stuff all his fingers in his mouth at once and finding ever more interesting bugs to eat.
He was still interested in gastronomic entomology at two and a half. But he didn’t look at all like All-ex—or like me, though he had the blond hair and blue eyes I’d had till age three, before both had turned pitch-black—and he showed some signs, through some amazing genetic mutation, of growing up to be someone worthwhile. Which would be thwarted if I let him starve to death or even—forbid the thought—if I allowed his father full custody.
ADS
15.4Mb size Format: txt, pdf, ePub