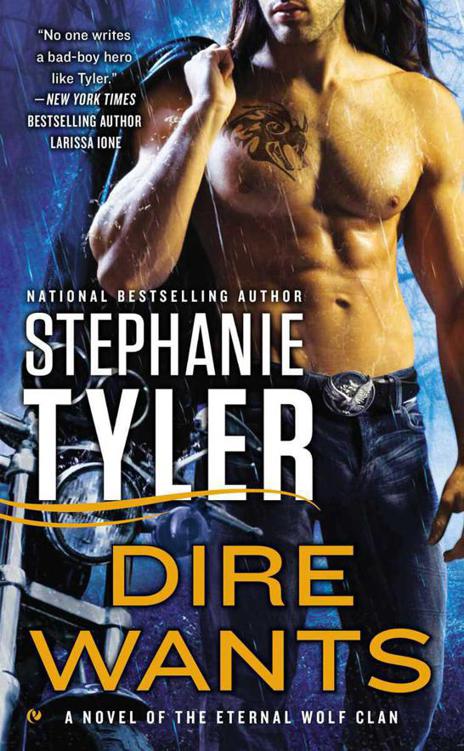 “Fast-paced, dark, and wickedly edgy,
Dire Needs
is a paranormal shot in the arm for the genre! No one writes a bad-boy hero like Tyler.”

“Stephanie Tyler puts a unique, fresh spin on shape-shifter romance. In
Dire Needs
, she creates a raw, sexy world where werewolves make and break all the rules.”

“Stephanie Tyler has created a story that kept me on the edge of my seat. With breathtaking danger, sizzling romance, and unexpected twists, these Dire wolves are going to rock the paranormal world.”

“The first chapter was one of the best I’ve read in a while. . . . The instant the book begins, you know you are in for a great ride.”

—That’s What I’m Talking About

“An exciting new paranormal series featuring werewolves. The theme is a classic to the paranormal romance world, but Stephanie Tyler is able to shake it up and give it a little more edge. . . . the potential to be a fantastic series.”

“The chemistry between Rifter and Gwen sizzles.”

“A fresh and sexy take on werewolves that readers will enjoy. . . . The book moves at a clipped pace as we are introduced into a very imaginative story. . . . a great read with smoking hot scenes.”

“
Dire Needs
creates an interesting new world, with lots of history and mythology. Great plot twists and turns, hot and steamy sex in the woods, and a bit of sweet thrown into the mix.”

“Riveting!
Dire Needs
hooked me from the very first page.”

—Shiloh Walker, author of
The Departed

Praise for the Novels of Stephanie Tyler

“Stephanie Tyler is a master.”

A NOVEL OF THE ETERNAL WOLF CLAN

For JH, always there

When churchyards yawn and hell itself breathes out

Contagion to this world.

Must be the season of the witch, yeah.

—Donovan, “Season of the Witch”

abilities
: The now-immortal Dire wolves were all born with abilities, except for Rifter, who was cursed with his at birth. These abilities were looked at with fear by the Dire population at large. In fact, the Elders were once Dire wolves who were sacrificed to Hati, the creator of the Dires, because they had abilities. The abilities range from dreamwalking to communicating with the dead, and can often be seen as both a gift and a curse to the wolves trying to balance them out.

Brother Wolf:
A Dire wolf is a dual-natured beast who lives with his Brother Wolf inside of him. These Brother Wolves are also depicted in a life-sized glyph on the Dires’ backs, the glyph coming out fully after a Dire’s first shift at age twenty-one. The Dires and their inner wolves have an even balance of power and a deep respect for one another. They both run the show, bowing to each other’s needs and wants when necessary. This differentiates them from Weres, who, when shifted into wolf form, cannot communicate or control their wolf sides.

Catskills, NY
: Place where the Dire wolves currently call home. Also home to the supernatural world of witches, vampires and other shifters who are not friendly and remain hidden; it coexists alongside the human world.

Dire wolves
: (*Also see
Brother Wolf
) Dire wolves are alpha, immortal wolves who live in tandem with their Brother Wolf and take on human form to survive in the world. Dire wolves are differentiated from Weres because they cannot be killed by any means, thanks to a curse of immortality cast upon them by the Elders. When first in existence, the Dire wolves lived a long time, with an approximate one-hundred-year life span, but they were not immortal. The majority of the Dire wolf population—which was quite large, since it preceded the Were population—was killed during the Extinction, and the curse on the remaining Dires wolves with abilities was cast at that time.

However, with their gifts, immortality is exhausting for the Dires—it forces them to remain in hiding and move quite often because their human sides will not age, unlike Weres, who, although immortal in theory, can be killed and will age, albeit slowly, in their human forms.

The Dires were trained in the warrior ways. They are powerful fighters, far more powerful and violent than Weres. However, both Dires and Weres can shift at will and both are pulled by the full moon, although the Dire wolves will never fall prey to moon craze, which often happens to young Weres during their earliest shifts and can last from the age of sixteen until they are twenty-one.

Dire ghost army
: These are the Dire wolves killed during the Extinction. They are raised by Seb, the master witch, through a black magic spell and are intent on harming the living Dire wolves. They then plan on spreading their destruction outward to Weres and humans.

the Elders
: The Elders are a mythical group of otherworldly spirit wolves responsible for the creation of both the Dires and the Weres, and also responsible for meting out justice to both populations when necessary. One example of this was the Extinction. There were originally four Elders: Hildr, Eydis, Leifr and Meili. Hildr asked to be released from her duties (aka killed) when outvoted on an important matter concerning the Dires and their abilities rather than go against what she believed in.

the Extinction
: In Norway, the Dire wolf packs committed a massacre of humans (who will later form the weretrappers) in direct opposition to orders from the Elders. The Elders killed all Dire wolves except for five Dires who were out on their Running—Harm, Rifter, Vice, Jinx and Rogue. Later the Dires discovered that another pack of non-immortal Dires in Greenland had also been saved by the Elders. Stray and Killian are immortal, since they have abilities, but the rest of their Greenland pack isn’t.

fated
: In the time of the Dires, their word for love was fated, so when a Dire talks about being fated, he’s really talking about love.

Greenland pack
: A pack of non-immortal Dires kept alive by the Elders after the Extinction so that wolves in that pack would give birth to brothers who would have abilities and thus fulfill an old prophecy.

hunters
: A human antidote to the weretrappers, they’re a group of humans who are on the side of good and therefore trying to weed out the bad supernaturals from the good, rather than use them or kill them at will, as the trappers do. In the supernatural world, they’re seen as just as dangerous.

mating
: Weres can mate with humans or Weres and sometimes with other shifter species like lion shifters. For the Dires, it’s a very different story, as the old ways dictate that Dires can mate only with other Dires and it must be ceremonial. First and foremost, a mating can never happen during first-time sex. It’s too dangerous to try to mate with a new wolf because shifting for the first several times is too hard and new wolves are uncontrollable. Mating happens by consent on both sides during the third time a male and female Dire lay together—that is the Dire custom because they don’t encourage sex without mating. Sex for the last remaining Dires is painful, because it goes against their mating protocol. During the mating, the non-shifted male is chained and the female will shift uncontrollably at the end. Thus mating equals danger for the male—will he be able to handle his proposed female wolf? After a mating, the Dires must come before the Elders to have the mating blessed. Mating makes Dires stronger.

the old country
: The Dire wolves were created by Hati during Viking times and lived primarily in Norway, with a large pack also in Greenland.

the Running
: An adult Dire has a great responsibility to his pack. Even before his shift, he trains as a warrior, as Dire culture is a warrior one. Also, because the shift for a Dire requires great strength, their lives are devoted to gaining the necessary strength before they turn twenty-one. After their shift, there is an importance placed on sensuality and play. The Running happens after their first several shifts, while they are allowed to run and play apart from the packs for six months in order to see if they are truly independent and able to blend well with humans now that their wolves have emerged.

Skinwalker
: There are many myths about how skinwalkers are created. The Dire wolves know that they can become skinwalkers if they commit matricide and/or patricide. Since this killing is an unnatural act, they become unnatural beings, although they remain, first and foremost, Dire wolves. A skinwalker can shift into other beings, taking on various personas for short periods of time. Some can see the future, and others are thought to be able to curse those who speak out against them. Some are seen as witch doctors, and typically, they are cast out and live alone.

Weres
: (See
Dire wolves
for more differences between Weres and Dires.) Were who are newly shifted can experience moon craze, in which they become uncontrollable and therefore dangerous to themselves, their packs and the human race. Many young wolves are put down because of this. The Dires wolves will often take in moon-crazed Weres they believe have the potential to become great warriors.

werepacks
: Werepacks are scattered across the United States and the rest of the world. The main pack is located in New York City, with other large packs being in Texas, California and Wisconsin. The
outlaw pack
that forms from the New York pack is now taking in rogue wolves from other packs to join their cause. They believed that if their king Linus sold out the Dires to the weretrappers, the Weres would be left alone. They are angry wolves, not very organized, and more intent on killing than following the old ways, which makes them quite dangerous. They like killing humans and have taken to selling their own kind to the weretrappers in exchange for protection. Some of them will work as bodyguards for both the witches and weretrappers.

weretrappers
: A paramilitary group of humans intent on destroying Dires and Weres, as well as using Weres for their own nefarious purposes. Their purpose had evolved over the years. At first, they were formed during Viking times; they were a tight-knit group intent on keeping humans safe from wolves. During the current century, they began to realize the power they could have if they were able to harness the power of the Weres. They capture Weres and experiment with ways to keep them under their control. They also create a pact with the witches, realizing they will need more supernatural help in order to gain domination over humans. Their goal is ultimate power and world domination, and they’ve begun to experiment with the dark arts (aka black magic).

witches
: Witches live in covens and stay among their own kind. Widely regarded with suspicion and hatred by the rest of the supernatural world, many have started allying themselves with the weretrappers for security, which will allow their race to survive.