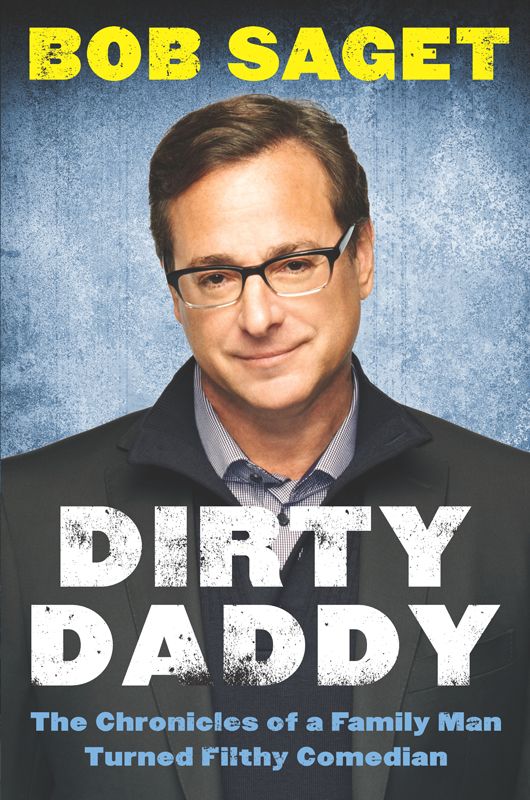 For my brilliant and understanding daughters

INTRODUCTION: We Are What We Are

CHAPTER 1: A Life of Free Association

CHAPTER 5: As One Door Opens

CHAPTER 6: Parenting My Own and Other People’s Kids

CHAPTER 8: Things I Shouldn’t Have Done

CHAPTER 10:
The Aristocrats, Entourage,
and Getting Roasted

CHAPTER 11: Relationships I’d Rather Not Talk About

CHAPTER 12: Falling Upward, or What It’s Like to Be Loved and Hated

WE ARE WHAT WE ARE

As a kid I often heard from my mom, as well as from the teachers in every school I attended, that I needed to behave myself and watch how I spoke. Apparently I was a mischievous little bastard. By the time I started out in stand-up at seventeen, I was careful about my language; this helped me get on television shows and go on the road opening for musicians like Frankie Valli and the Four Seasons and Kenny Loggins.

But one day in my early twenties, I snapped. I didn’t want to disappoint my mom, but I couldn’t take the censorship of it all. Some of the comedians who fascinated me the most—Lenny Bruce, George Carlin, and Richard Pryor—had also felt oppressed by the things you could and couldn’t say in public.

On Conan O’Brien’s show he once asked me how I was able to keep it together through my eight years on
Full House
and not say the wrong things in front of all the child actors. I explained that I would occasionally lose it while we were shooting and arbitrarily yell out things like “Cock! Shit! Fuck!”

It was a planned “bleep,” a setup so Conan could ask me on the air something he’s always asked me on his show: “
What
is the matter with you?”

We were being funny with that exchange, but there’s a deeper truth behind it. It’s why people go into a life of comedy in the first place. When you’re told not to do something, unfortunately, for some of us, is exactly when you do it. No means no. But not to a comedian.

In my career I’ve had the fortune of being able to work continually in radically diverse creative worlds. By day I’ve done some of the most family-friendly TV imaginable. Then, often in the same day, I’ve gone onstage in the L.A. comedy clubs and whirled off with an adolescent’s delight about my grandma’s projectile diarrhea.

That in itself could, by many psychiatrists’ standards, be a bit of a call for help. I never do it to shock anyone, even though people have sometimes thought of me as a shock comic. If it is a through-line or a constant to what I do, it’s not something I’m proud of. But I’m not ashamed of it either. It’s more of a handicap. Or, depending on your perspective, a gift. It’s what I used to think of as my mania. Now I’ve come to embrace it. You have to love yourself. But not in a movie theater, because they will tabloid your ass.

Mostly I’ve just always done what I found funny, strange as it may seem. Immature taboo humor (
good
immature taboo humor) always made me laugh. I love all kinds of humor, but my love of “sick silliness” started with my dad—whom you’ll hear a lot more about—and his constant dick jokes. He was a grown-up who said things a nine-year-old like me always wanted to say
because
I was told not to.

Joking has also been a means for me to avoid pain. I’ve lost a lot of people, and throughout my childhood—almost every two years—someone in my family died at an unnaturally young age. The more tragedy befell us, the more odd gallows humor I would release. My humor, especially once I started doing it professionally, was always dark and twisted. Like your penis if you accidentally slammed it in the door of a car.

This book is about how that humor helped me survive. It’s been inside me for a long time. It has congealed. I am writing what comes out of me. Well, not exactly, or this would be a book about “leakage.”

The goal of living a full life is so, at its end, you’ll have learned some things along the journey. I’m nowhere near the end yet, but I’ve already had some incredible experiences. I’ve met and worked with some amazing people, I’ve lived, I’ve loved, I’ve cried . . . and through it all, I did it my way. In this book I’ll talk about many of the people I’ve known in my life and in the worlds of comedy and entertainment. Some of them are still around; many are not.

I’ve had some dark times, but the thing about dark times is there
has
to be light at the end of the tunnel. And one great thing about being a man is you can go to bed depressed and feeling negative, but when you wake up in the morning, through no effort of your own, you’ve got a nice display of morning wood to let you know it’s the start of a new day. You could be waking up next to the love of your life, or the girl your buddy told you not to talk to the night before because she was a drunken evil vortex. Or you could be totally alone in bed and not sure if you want to get up yet—but
he’s
up. Like a sundial catching the first ray of morning light, casting its shadow on your stomach. Or if you have a tiny penis, casting its shadow directly next to itself, hardly a shadow at all. Or if you have a choad, which I’m told is a penis that is wider than it is long, and you were hoping to use it as a sundial but only had, say, an inch of length to it . . . you could still be proud to look at that tiny stump of wood in the middle of the day and declare to the universe, “It’s one o’cock!”

No matter what the size of your penis, what matters most is not size, it’s honesty, and yes, I’m switching to deep sincerity, that’s right, from penis size to what really matters in life . . . the stuff a lot of people take for granted: health, family, friends, human kindness, a love for all living things, and being honest and true.

“Honesty,” as Billy Joel says, “is such a lonely word.” And I don’t think he’s referring to honesty in regard to penis size—unless yours is truly gigantic, in which case, if you are a compassionate man, have you ever thought of being a donor? Like when you fill out your driver’s license form and sign off your organs to science, you could hypothetically, if they allowed it, leave your penis to someone who could use the extra inch-age. “I’d like to leave my lungs to the American Lung Association and my penis to Marcus, an eighteen-year-old man who awkwardly wanted to talk to me once at a urinal in the Phoenix airport.”

As you can see, I have a tough time writing too many words in a row without a dick joke thrown in. Or a shit joke. Or a combination of the two, which you shouldn’t do, because as all the great philosophers say, “You can get an infection.”

My fear at this point is that this book will not be taken seriously, or for some, it may be taken too literally. If the latter is the case, I recommend you see a shrink. I know there are readers of this who probably don’t normally read books; they are fans of comedy. I would be remorseful if seventeen-year-old boys who have read just this introduction so far have already turned the book into a drinking game—taking a shot every time the word
penis
is mentioned. For the safety of those young people, whom I have huge concern for, as they are our future, I’d like to hereby change the drinking game cue word to
shart
—a hybrid word (
shit
+
fart
), which sadly secures no points in Words with Friends.

You will come across an ample amount of sharting in the chapters that follow. Maybe not as many as you will penises. But that just means you won’t get quite as drunk. Sharting, as a term at least, is relatively new, but penises have been around forever, and penis humor is what my dad and various other weird mentors in my life imparted upon me as a way of dealing with all of life’s pain and challenges.

When I say humor has helped me survive, I don’t mean survival in terms of, say, the Holocaust. Nor in terms of getting stuck in a mountain chasm and having to cut your own arm off in order to stay alive. And for sure this book is not about surviving in the way our reality-TV culture portrays it.

If you are reading this, it means you are a survivor too—you have survived the first pages of a book by me. I am honored you have chosen to spend some of your precious time doing so, and in the following chapters I will share with you my stories of humor, inspiration, and uncontrollable sloppy loud flatulence, if that’s where your entertainment nut lies.

Personally, my entertainment nut lies to the side, underneath my laptop as I type this. And to be honest, that is not an easy position to be in. I had no idea writing a book would involve so much pain. The pain of my nut—in fact, both of them—being heated under my hard drive. Odd it’s called a hard drive considering I am flaccid while I write. Well, usually.

It’s cool to me that it takes so long to write a book. My only concern is that as I type my hard drive may heat up and start making that sound like teeth grinding. I’m not worried about the hard drive; I’m worried that after the many months it will take to write this book, the sound will be actually coming from my testicles. That they could possibly be eating themselves. A very wise man once said, “Eat thyself.” Okay, no wise man ever said that. I doubt anyone ever said that. And if they had been able to say that, they wouldn’t have been able to hear it because they were munching on themselves. Baron von Munchimself.

I apologize. I don’t want to open by dwelling on lascivious stream-of-consciousness adolescent ramblings. So I’ll return to them shortly. You may want to sit down for this. Or put on a gimp suit, zip it up all the way, and have your Dominant strap you into a recliner and read it to you in its entirety while occasionally feeding you Top Ramen noodles so your blood sugar doesn’t drop. I must have you in top physical condition while you are ingesting this material.

A LIFE OF FREE ASSOCIATION

Before I dive in, I should give you a heads-up that my book, like my life, does not always proceed in a linear fashion. When I write—whether it be stand-up, or scripts, or graffiti on the sides of a high school, or a Sharpie self-portrait on a biker’s ass—I enjoy free-associating, just hitting on any subject that somehow pops into my mind. Underpants. I don’t give a thought to how the synapses fire. Deviated septum. I enjoy it, like riffing in my stand-up. Detached retina. It’s a skill of mine that is fun to employ. Like performing improvisational jazz must be for musical people. Come to think of it, there are probably a lot of jazz musicians with detached retinas. For them, I will record this book on tape with pure conviction.