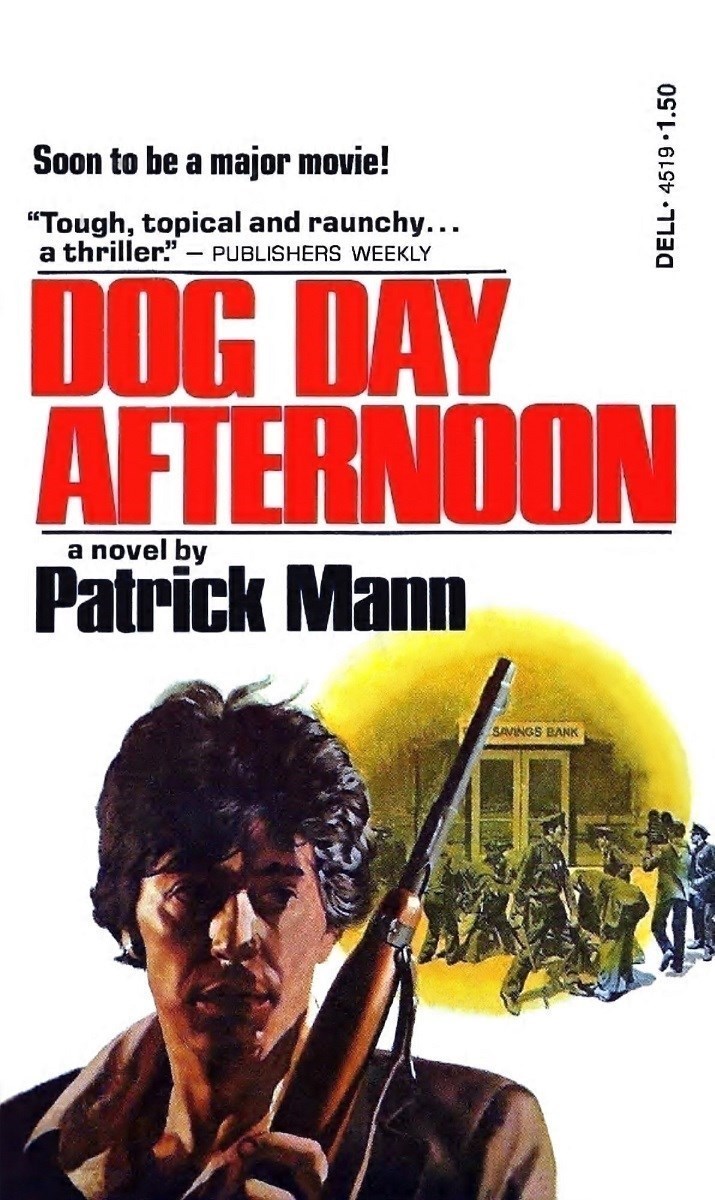 YOUR NAME IS LITTLEJOE
AND YOU HAVE BIG IDEAS

Some men are afraid of the law. You’re not. As far as you’re concerned, the law had better be scared of you—scared enough to hand you a million dollars and a jet airliner to take you to a place where you can enjoy the money. And there’s nobody to say you’re wrong as you and your crew hold a bank full of hostages and start turning on the heat while the TV cameras whirr and the public gasps and the New York City Police Department and the F.B.I. sweat and squirm on the edge of surrender . . .

the hottest afternoon you’ll ever live through!

IT BEGAN IN GREENWICH VILLAGE

where the New York sexual underground and the Mafia rubbed more than shoulders, and the weirdest crew of bank robbers ever assembled was put together by a man named Littlejoe

IT SWUNG INTO ACTION IN A BANK IN QUEENS

IT CLIMAXED AT J.F.K. INTERNATIONAL AIRPORT

where a fueled-up Boeing 707 waited to take off, and the police knew they had just minutes for one last desperate gamble before the most successful getaway in history

DOG DAY AFTERNOON
is based in part on material created by Frank R. Pierson.

No part of this book may be reproduced in any form or by any means without the prior written permission of Delacorte Press, New York, N.Y. 10017, excepting brief quotes used in connection with reviews written specifically for inclusion in a magazine or newspaper.

I
t happened on the hottest day of the year during the last soap opera of the day.

Flo usually didn’t watch the soap opera, not in summer, because summers her husband worked nights and slept mornings. By the time the day had heated up to its fullest, mid-afternoon, he was awake, bitching, yelling for his six-pack of Piel’s and whatever game was on TV.

This day had begun even hotter than usual, a real dog day afternoon in August, when New York City was a pizza left too long in the oven, burnt around the edges, damned near poisonous, impossible to swallow.

Irritably, Flo’s husband switched channels back and forth. The heat was so fierce inside their tiny house in Queens that even a cold beer and a baseball game failed to keep him quiet.

“Shit,” he told Channel 2. “Shit,” he informed Channel 4. “More shit,” he announced as he kept switching. The only reason he paused at Channel 7 was that a rather attractive young woman had just allowed an older man to pull her into his arms and kiss her.

“No, Doug, no,” she was moaning. “I’ll never be able to look Amy in the eyes ever again, don’t you understand?”

Flo had stopped behind his chair, because she wanted to see whether Amy’s husband, Doug, would now let the girl alone. She found herself wondering what could be so special in the middle of a broiling afternoon to warrant the word BULLETIN.

“Will you shaddap?” her husband asked, although she had said nothing.

Now a man seated at a desk filled the screen. The camera pulled back for a moment, then started to close in on him as he began to read from a sheet of paper, barely looking up now and then.

“This special bulletin just in from Police Headquarters. A neighborhood branch of the Chase Manhattan Bank is in the process of being robbed by two armed gunmen in Queens. With the robbery in progress, this now from Channel Nine’s camera crew on the scene.”

Her husband’s knuckles whitened as he prepared to turn the dial. “Augie,” Flo said. “Wait a second.”

“F’ what? Some cockamamie heist?”

“Wait a second. You got something better to watch?”

The picture changed: a section of a street baked in the sun. Uniformed police milled around. A storefront bank with one rather small picture window stood in the center of the screen. Two men seemed to be arguing in front of the door of the bank.

“The robber,” Flo said. She could hardly get the words out.

Her throat started to close over in fright. “Th-the robber!”

The zoom lens was closing down inexorably on the two men in front of the bank, the detective in the hat gesturing, the other man, younger, in chino pants and a white shirt with rolled-up sleeves, looking cool and calm. “Augie,” Flo said. Her voice came out in a moan. “That man. That armed bandit.”

“Fuck ’im,” Augie muttered. He switched to Channel 11, but the tube showed the same scene from a different angle.

“. . . here with Channel Eleven’s camera crew at the scene of the crime to bring you the latest developments in this bizarre and unprecedented—”

“Shit,” Augie grumbled. He snapped the dial back through 9 to 7.

“Amy is my best friend,” the woman was telling Doug. Beneath the image, a line of white type was moving slowly past from right to left. “. . .
ARMED ROBBERY OF CHASE BANK BRANCH NOW IN PROG
. . .”

“Shit again.” Augie twisted the dial to 5, and once more the man in the light shirt was arguing with the detective in the hat.

“What?” Augie demanded. “What’s all the guinea cursing about now?”

“I see they ain’t nothing on the tube but some shit-head holding up some bank.”

Augie sat up in his armchair, his scrawny neck stretched as he stared fiercely at the screen. “Shit and shit again! It’s him.”

“Joey’s holding up . . . a bank,” Flo said, her voice swimming in tears like an anchovy in olive oil, shimmering, drowning sleekly. “My son, my little Joey, he’s robbing a b—”

“Your fucking son maybe,” her husband cut in. “Not mine.”

“Not any more.” Her husband got to his feet suddenly. “I ain’t got no son. I never did have no son. Not that shit-ass little bastard, not ever and especially not no more.” He stamped out of the room.

Flo moaned wordlessly for a moment, then sat down in her husband’s chair. She adjusted the fine tuning to get a better image and turned up the sound to make sure she heard every word.

Her son was all over the tube. All of New York City was watching him. The whole tri-state area was seeing him rob a bank. She wanted to be sure she didn’t miss any of it.

J
oe was of two minds.

He sat in the waiting room with the rest of the people who had come to be interviewed. Some had been far-sighted enough to bring newspapers to read. Being out of work, they brought smudged copies of the
News
or the
Times,
that morning’s newspaper salvaged from subway trash baskets. Nobody was reading the afternoon
Post,
Joe noticed. Nobody had the extra fifteen cents to blow on it.
Post
want ads weren’t worth fifteen cents.

Joe surveyed the four people in the room, all men, all about his age, late twenties. He wondered how many of them had been in Nam. Half, maybe? They were the right age for it. A third?

He felt of two minds because he needed this job badly but the idea of getting it made him want to puke.

Okay, he told himself, cool it. The ad had been running all week and the job wasn’t filled yet. The bank was a big one with hundreds of offices around town. The job was not one of your crappy beginner’s jobs like teller-trainee. The ad said very plainly: “Must have yr’s exp. or equiv.”