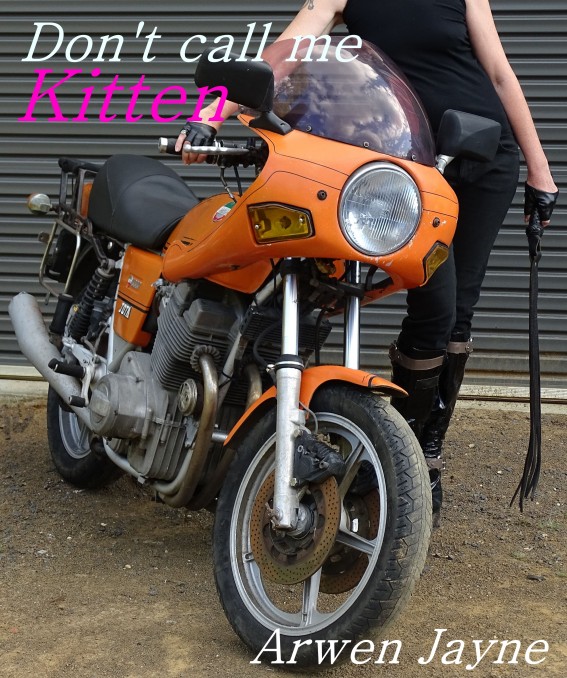 While reference
has been made to some actual historical events or persons and some
real locations all other names, characters and places are
fictional; the product of the author's over imaginative mind. Any
resemblance to actual persons, living or dead, businesses or places
is purely coincidental.

This book
contains sexually explicit scenes and language that may offend. The
author is not responsible for any loss, harm, injury or death
resulting from use of information contained in this title.

This book would
not have been possible without the help and encouragement of my
friends, my partner and my family. Thanks go to my wonderful editor
Jen for volunteering her precious time and giving much needed
polish to this work. Any remaining errors in the book are my own.
I've tried to go with American spelling except where I've used
Australian slang. To Jen, as always, for our discussions on
metaphysics, for listening and giving honest feedback on my ideas.
To my partner for his never ending patience, encouragement, advice
on weaponry and other technologies. And a special thanks to all who
read the first three novels and have encouraged me to continue the
series.

Spiritual paths of the
Malakim

Other books by the
author

Helena felt
the sharp knife pressing against her throat and stilled. The front
door bell rang again. “What do you want me to do father?”

“Answer the
damn door, but if you give me away you’ll be joining that
ungrateful whore. Even if they take me away I’ll make sure you and
your sister join her. I have connections. I can make sure you
suffer. Don’t think for a moment you can betray me and get away
with it.”

Walking away
from her father’s hold as he released her, Helena went out into the
corridor and opened the front door. She looked straight into the
face a sad eyed junior sergeant from the Politsiya, giving nothing
away. If she wanted her and her sister to survive this dreadful
night she needed her wits about her and whatever acting skills she
could harness. “What can I do for you sir?”

The sad eyed
sergeant took his cap off and placed it under his arm. “I need to
speak with your father. I’m afraid I have some horrible news.”

Helena had no
doubt what that news was. Only an hour before, using disposable
gloves her father had thrown at her, she’d helped her father drag
the body behind the bins in the back alley. Her father had reasoned
it would look like a mugging gone horribly wrong. The garbage men
would have found the body when they did their weekly scheduled
rubbish pick up. Helena schooled her face and kept it rigorously
blank. “I’ll go and get him for you sir.” She returned to the
living room she’d just left. “It’s the Politisya Tyatya.” She was
careful to use an affectionate term for papa in case the sergeant
overheard them. Make it look like a normal family. Ha! What a joke.
Truly she hated her father’s guts and prefered to think of him by
the name she gave him in her thoughts, the beast. But now was all
about survival so she played the act.

“I’ll deal
with this Lena. You go see to Anya.”

Helena nodded
and retreated to the bedroom she shared with her sister. An
eighteen and a ten year old sharing a room was a little strained at
times but it was all they had. She loved little Anya. She would
have to be a mother to her now. Now that the beast had finally gone
too far and beaten her mother to death. It was absolute fear that
had had her helping to drag her mother’s body, into that lane. Long
ago her mother had made a contingency plan for just such an event.
She’d known her daughters would have nowhere else to go, no other
surviving relatives to turn to, so she’d made a deal with the local
Mafia. It was that plan that Helena would put in action now.

Anya sat on
the bed, wide eyed and shivering but not from cold. Helena wrapped
her in her arms and gave her as much reassurance as she could but
she didn’t have a lot of time. “Listen Anya. I want you to hide
under the bed. Now sweetheart.” The child was in shock but nodded
and obeyed. Helena passed her a couple of blankets and Anya’s
favorite soft toy. “Wrap yourself up well. I’m going to open the
bedroom window to make it look like you’ve run off, in case he
comes for you. Don’t come out from under the bed and don’t make a
sound. No matter what you hear don’t come out until I return for
you. But if I’m not back by morning go out the window anyway and go
and find Eduard Petrov. Tell him what’s happened. Do you
understand?”

“Be brave
Anya. No matter what we’ll survive.”

“Lena, where’s
my vodka?” A grating yell echoed up the corridor.

Ah so the
politsiya had gone and now the beast wanted his usual did he?
“Coming.”

Helena went to
the kitchen pantry. Using a small step stool to reach to the very
top shelf she found what she was looking for and took it down.
Keep acting Helena
, she reminded herself
he mustn’t
suspect anything
. She hurried down the hall. As she passed the
mirror on the hall stand she thought she saw something in the
reflection. A bird? A vulture perhaps. Her shock and fear must be
playing with her mind but she didn’t have time to see more than a
fleeting glance out the corner of her eye. It was always best not
to keep the beast waiting.

Her father
grabbed her as she returned to the living room, slapping her hard
in the face.

“What the hell
took you so long?” He grabbed the bottle from her and proceeded to
pour himself a large glass. He looked up, studying her. “Now the
bitch has karked it on me you’ll have to take her place. Starting
tomorrow you’re leaving school. I expect my breakfast promptly at
six, the house spotless by the time I get home and a meal served on
the table by seven. You’re to look after Anya. Make her lunches,
keep her clean and get her to and from school. Can you do that
Lena?”

“Yes father.”
Not that she didn’t already do most of that anyway. There’d been
many a time she’d had to cover for her battered and weary mother.
Helena certainly didn’t have any intention of quitting school. As
long as she could remember she’d wanted to be a geneticist like her
maternal grandfather. Her granddad’s experiments in plant breeding
at the Moscow Botanical Gardens had her fascinated long before she
even knew what science was. But she wasn’t about to tell the beast
any of that.

“Good girl.”
He stroked her long blond hair and took a deep swig straight from
the bottle.

Helena
schooled herself not to flinch. The creep would hit her if he got
even a hint of her revulsion. She wasn’t sure how long it would
take for the drug in the vodka to work. She’d have to take whatever
the beast dished out, if only to keep him from Anya. She knew
better than to fight him outright. She wouldn’t goad him but she
wouldn’t give him what he wanted either. She might obey but she
would never submit. Never give him the power over her that he
craved. It would rile him, as it always did, but a beating was
better than the degrading alternative. Her mother had tried to
protect her, tried to stand between the beast and her. It had
finally cost her her life. She felt her eyes becoming wet. She
could have none of that. It would only anger her father. Time to
grieve later. Discretely she drove the nail of her index finger
into the underside of her thumb and let the pain steady her. The
thump on the couch as her father shoved his weighty bum onto it
brought her back to the matter at hand. She gave him her best
impassive look.

“Shit girl,
this is a good drop, where’d you find this?” He peered at the label
with interest.

Always go as
close to the truth as you can if you ever need to lie to his face.
That was what her mother had taught her. “Something special Mum was
saving for you.”

The beast
growled. “Don’t you ever mention her again, you hear. I can still
put you over my knee and beat you girl. Don’t you forget that.”

Ha! As if
she’d forget. “Forgive me father. I only meant to answer your
question.”

“Hmph! You’re
a smart one Lena, I’ll give you that. Maybe I should reward you for
that.” He stood and made to remove his pants.

Helena’s
adrenalin and self-preservation kicked into gear. Fuck! No! Not
that! Time for Plan B. Time to see if she could draw him out of the
house. So she spat at him. “I’m not your whore!” Turning she ran
down the corridor and out the house, hearing the roar of the beast
close behind her. She ran into the backstreets, keeping about one
block ahead of him. He wasn’t that fit and the vodka was probably
slowing him down. She got enough ahead of him she had time to reach
into jean’s pocket and hit the button on the simple hand device the
Mafia had given her Mum not six weeks before. The beast had been
stressed at work. He hadn’t gotten a promotion he’d wanted. A
promotion he thought he deserved. After that the violence at home
had escalated. Having recovered her breath she turned her legs
again towards a point on the Moskva River, not far from the
Northern River Station.

A car came to
the curb and a man in a plain grey trench coat got out. At six foot
five he made an impression, not unlike a brick wall might make to a
speeding car. He had that broad face of someone well fed on
vareniki and vodka. His cold blue eyes betrayed no emotion as he
walked right up to Helena. “We need to draw him out. Come close and
cuddle me as if I’m your secret lover.”

Helena raised
an eyebrow at that but complied. It wouldn’t hurt her any and it
might help in getting the one thing she had wished for in her short
life.

“Get your
hands off of my daughter.” The beast bellowed as he huffed and
puffed to catch up with them.

The man smiled
at him with barely concealed disdain. “You must have the
constitution of an ox old man. The drug should have killed you by
now. No matter.” He pulled the semi-automatic Russian made Makarov
pistol from beneath his trench coat and emptied a round into his
target. “There’s always Plan B.” He then calmly unscrewed the
silencer from the weapon and holstered it before returning his
attention to Helena, lightly stroking her cheek. “Come see me in
the morning Kotitsya. We’ll dispose of this one for you.”

Helena let out
a breath she hadn’t realised she’d been holding and nodded to the
man. She was nobody’s kitten but she’d ignore the pet name he’d
just used for her. She wasn’t about to correct the big Mafia man
who’d just done her a favor beyond price. “Thank you Mr
Petrov.”

“Oh I wouldn’t
go thanking me yet, we have much to talk about you and I.”