Don't Put Me In, Coach 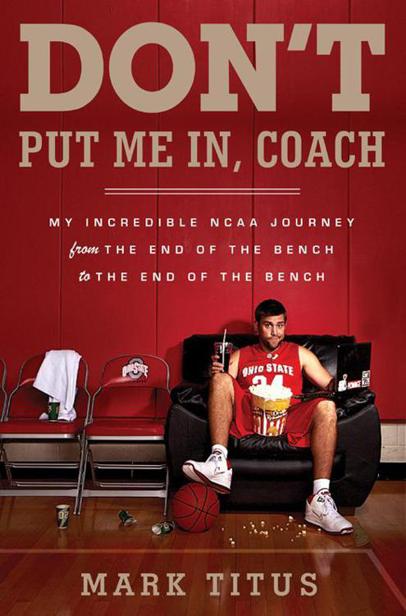 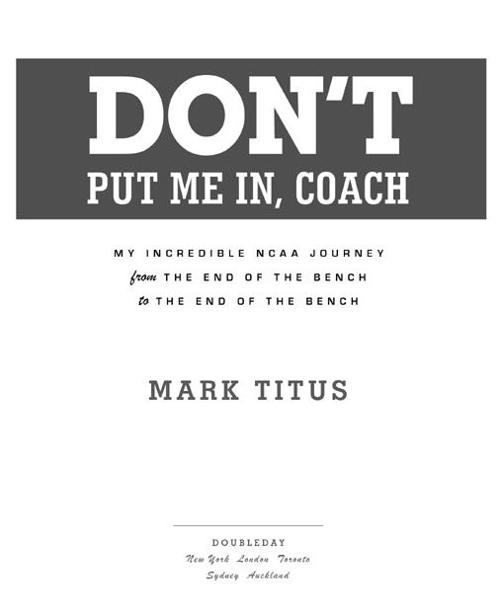 All rights reserved. Published in the United States by Doubleday,
a division of Random House, Inc., New York, and in Canada by
Random House of Canada Limited, Toronto.

DOUBLEDAY
and the portrayal of an anchor with a dolphin are
registered trademarks of Random House, Inc.

Insert photographs courtesy of the author

For Mom and Dad—
Without your many sacrifices, none of this would have been possible
.

And for the Trillion Man March—
You know I still love you, though we touched and went our separate ways
.

I would be remiss if I didn’t thank some people for playing a significant role in my life and helping this book become a reality.

I want to first thank my fiancée for her endless support and for deciding to give a benchwarmer a chance. I want to thank my mom for sacrificing her time and money over the years so I could pursue my dream of playing college basketball, and I want to thank my dad for finding a way to come to every game (home and away) during my senior year at Ohio State, even though he knew I probably wasn’t going to play. Special thanks go out to my brother (and his friends) for letting me tag along when I was younger, which is a big reason why I became moderately good at basketball, and much love to my sister for always being my biggest fan. And a shout-out to my best friend since sixth grade, Keller, for being a great sounding board for my ideas and for giving me some good ideas along the way too.

I want to thank all of my teammates, including managers, throughout my life and from every level of every sport I played (especially my Ohio State teammates), for forming friendships and brotherhoods that will last a lifetime. I’ll forever be indebted to Coach Matta, all of my assistant coaches at OSU, and The Ohio State University in general for giving me an opportunity that I know I was never entitled to. I want to thank all the Ohio State fans all over the world and the people of Columbus, Ohio, for accepting a Hoosier into the community. I also want to thank my fifth-grade creative writing teacher, Mrs. Boles, for showing me that writing can be fun and doesn’t always have to be an arduous process. And a big thank-you goes out to all of the people back in Brownsburg, Indiana, and Danville, Indiana, who supported me even when I was a nobody. There are too many of you to name everyone, but you know who you are.

I want to thank Bill Simmons for giving me my big break, and Jimmy Kimmel for being a mentor for the past couple of years. I also want to thank my agent, James “Babydoll” Dixon, as well as Alex Glass and Scott Trident Media Group, for negotiating a multimillion-dollar book deal for me. And of course, I have to thank all of the fine people at Doubleday, specifically my editors, Jason Kaufman and Robert Bloom, for working hard behind the scenes to make this book much better than it would have been otherwise.

And lastly, I want to thank the Trillion Man March for taking me on an unbelievable ride that I’ll never forget as long as I live. You guys are awesome. But you knew that already.

I
woke up on the morning of August 28, 2009, in Windsor, Ontario, with groggy eyes and a pesky morning wood I couldn’t seem to get rid of.

Undaunted, I crawled out of bed and slowly made my way down the hallway to the bathroom. I positioned myself in front of the toilet, lowered my underpants, and emptied a stream of urine into the bowl, although nearly half of it ended up on the seat.
Sucks for whoever has to clean that up
, I thought before flushing the toilet and returning to my room, where I crawled back into bed and played a game on my cell phone for at least a half-hour.

Yes, August 28, 2009, started like most days typically do for me. Little did I know, though, that by the time I got back into that same bed later that night, it would certainly end up being anything but a typical day.

I was about to start my senior and final season as a walk-on benchwarmer for the Ohio State basketball team, and I was in Windsor because our team had traveled there a couple of days earlier to play the University of Windsor and the University of Western
Ontario in a few exhibition games. Even though it was still the off-season and most American college basketball teams weren’t allowed to practice together yet, we were able to play in Windsor because of an NCAA rule that allows teams to make international trips during the off-season once every few years to play foreign competition. And yes, teams are permitted to go just about anywhere in the world on these trips, yet we chose to go to a place that was five minutes away from America and, at just a four-hour drive, was literally the closest foreign soil to our campus in Columbus, Ohio. In other words, this was an “international trip” in the same way that OJ was “not guilty”—I wasn’t buying it, even though pretty much all of the black guys were.

The first game on our trip was to be later that night against the University of Windsor, who we were actually scheduled to play the following night as well. Throughout the day leading up to this first game, I was certain of two things. First of all, I knew for an absolute fact that we would destroy Windsor because, well, they were Canadians, and if there are two things that I can think of that Canadians are historically not very good at, they are basketball and beating Americans. (I tease you because I love you, Canada.) And secondly, because I knew that we would easily beat Windsor, I was also absolutely certain that I would get to play in the game. As a walk-on benchwarmer for the team, I typically only saw the court during games when there were only a few minutes left and our team was in the midst of a blowout. It seemed to me that this game would qualify as one of those times, so I spent all day mentally and physically getting prepared.

Now, to an outsider, playing for just a handful of minutes in a game in which the outcome has already been decided might not seem like much, but for most of us walk-ons it can be a pretty nerve-wracking experience. After all, when it’s time for us to check into the game we’ve typically been sitting on the bench for a couple of hours and are therefore in no way warmed up or physically prepared to play high-level basketball. Plus, since we’re walk-ons, it can be assumed that even if we were properly stretched and
warmed up, we’d still be much less athletic and much less talented than all the other guys on the court, so really, we’re at a huge disadvantage from the start.

Things We Fear by Glenn Rolfe
Almost a Family by Stephanie Bond
Rebel Elements (Seals of the Duelists) by Giacomo, Jasmine
Clearly Now, the Rain by Eli Hastings
Dead Letter by Jonathan Valin
Faces in the Rain by Roland Perry
Hat Trick by Matt Christopher
Wolf Spell 1 by M.R. Polish
The Moor's Last Sigh by Salman Rushdie
When Angels Fall by Melissa Jolley