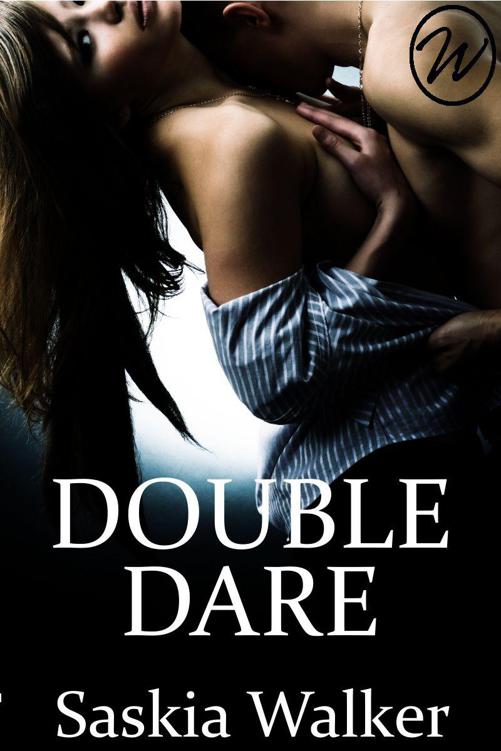 Please note: this novel has been previously published with an alternative cover.

T
his book is for sale to adults only. It contains sexually explicit scenes and graphic language which may be considered offensive by some readers.

"These two characters are a perfect match and the combustible love scenes throughout the book serve to underscore their compatibility. I also enjoyed the unique flavor that Saskia Walker, as an English writer, adds to all of her books."
Fallen Angel Reviews

Investment broker Abigail Douglas has got it all, but Abby
—
the woman
—
longs for a secret affair, a playmate who knows nothing about her high-powered business world, and Zac
Bordino might just be the man. He's mysterious and sexy—just right for Abby's walk on the wild side—but very soon she finds that she wants more, and his mysterious, evasive nature makes her curious. Is there more to this sexy, entrepreneurial club owner than meets the eye? And why does she suddenly feel as if her every move is being watched?

Zac Bordino is perplexed when he realizes that the woman managing his business investments is the same woman he's having an affair with. She's pretending to be a little nobody out for a good time, and because she's a red hot number he plays along, cautiously observing her to get to the truth.
From high-powered offices in London to pulse-pounding nightclubs in Paris, they find an insatiably perfect match in business and in pleasure.
But when Zac begins to fall for Abby, he has to decide whether to reveal the secret link between them, or try to win her heart first.

Please note: this novel has been previously published with an alternative cover.

For Barbara, who encouraged me to write, and for my real life hero, Mark, who dared me to live my dream and is right there with me every step of the way.

"Coming through, hold the doors." Abigail Douglas clutched her take-out lunch packages to her chest and made a dash for the elevator.

An arm shot out, one strong hand halting the movement of the stainless steel doors. She ducked under it, noting as she did the rolled up white linen shirtsleeve and the muscular male forearm.

She quickly counted three occupants, a couple, and the man who'd halted the doors for her. "Thanks." She turned on her heel quickly as the heavy doors shut behind her.

Bright blue eyes met hers, and a wolfish smile. "Any time."

She looked the man over and her body switched all systems to red alert. She'd already been on amber alert—it was a sweltering August day and heat did bad things to her. Men weren't safe from her scrutiny. Especially gorgeous ones with wolfish smiles. Tall and lean, with black hair and startling azure eyes. A document dispatch package rested in one of his hands.

As the elevator moved, she picked a napkin out of the lunch bags and fluttered it in her hand in a futile attempt to stir the air.

Reflected in the shiny surface of the doors she could make out the couple at her side, wobbly but distinct. A suited man, flirting with a bubbly blonde. He was running his fingers over her back whilst whispering in her ear. The blonde giggled in response and shuffled on her high heels, pinning him up against the wall of the elevator.

Abby glanced back at the guy by the door. He caught her eye. He was half smiling to himself.

She glanced away, then back.

He didn't falter under her stare, but then nodded back toward the couple to her right.

The blonde was leaning in against her man, nuzzling his ear with her mouth. He was gone on it, his face contorted with pleasure. His hands clutched at her bottom, riding her dress up. He had a handful of it in his greedy paws as he fondled her behind. The tops of her lacey stockings were on display as a result, her buttocks peeping out below the hemline too.

Abby stifled a laugh then looked back at the wolf-smile on the guy's face. His eyes were narrowed while he watched her, watching them. Curiosity stirred inside her, and arousal. They shared the silent joke. He'd made an intimate connection with her. More than that, there was a contained sexuality about him that aroused a deep response. A pulse charged through her body and began a slow throbbing between her thighs. It was a direct response, a need: she wanted him.

She barely registered the ping of the elevator doors. It was her floor. She gathered herself, shoving the napkin back in the bag.

He rose up to his full height and nodded as she passed.

What a hunk. Dangerous looking too. Wouldn't some sexy leisure time with him be something? She shook her head as she walked across the plushly carpeted landing and through the heavy glass door of the Robertson Corporation offices.

As she waited to hear the familiar sound of the door whooshing shut behind her, the hairs on the back of her neck rose, awareness darting over her body. She turned back just in time to see the doors whoosh closed behind another body. The guy from the elevator was standing directly behind her.

Up close, he was devastating. She was tall, but he was taller still. Those startling bright blue eyes of his contrasted with his darker looks, black hair and lashes to die for. His nose was a little over long, not entirely straight, and his lips were firm and passionate. Hooded eyes measured her reaction, his brow drawn down as he looked at her—an urban predator, his presence impacting on all her senses as he stalked in her wake.

"Documents for Tom Robertson." He gestured with the package in his hand.

"Right, of course, come in." Glancing over at the front desk she saw that Suzanne, the receptionist, was busy on the phone. She stepped behind the desk, set down the lunch bags and put out her hand.

He passed her the package.

She noticed his poise. Even dressed casually in faded jeans and a soft, white linen shirt he made an impact. The shirt fell open around his neck, revealing the elegant line of his lean throat and collarbone, as well as the taut muscle of his upper chest. His hair was thick and black. She wondered what it would feel like under her hands.

"You'll need a signature," she managed.

His eyes lit. "Yes. Indeed." He felt around in his back pocket and pulled out a piece of paper, glancing at it.

She scrabbled on the desk for a pen. Suzanne put one in her hand without breaking her conversation. Glancing down at her, Abby could see Suzanne watched with amusement.

He put the piece of paper on the desk, pointing. "Just sign over that one, the last client signed in the wrong place." His voice had a deep, resonant timbre, as if he were suggesting an illicit rendezvous rather than asking for a signature. It ran over her body like silk over naked skin, making her prickle with awareness. She could collect packages from him all day long.

She signed and passed it back.

"Anything I can help you two with?" Suzanne turned to give them her full attention, once her call was over.

"Thanks, Suz, we're fine." She smiled apologetically at the guy. "She's training me in, I'm new on reception."

Suzanne chuckled at the comment, but didn't contradict it. "Got anything else for us or is that it?"

"That's it, no...wait." He dipped his hand into his back pocket again.

Abby watched, suddenly aware of her fingers and how they might feel dipping into that pocket for him.

He put a couple of business cards down on the desk, black, with a silver hologram image of an eye. "It's a new venue, over in Camden. I recommend it."

Abby picked up one of the cards, passing the other to Suzanne. She felt as if she'd been given a calling card by a magician. When she moved it, the hologram eye winked.

Location details, contacts and web addresses were scrolled beneath.

Suzanne grinned and popped the card into the pocket on her shirt. "Thanks. Personal recommendations for party time are always welcome."

The courier saluted, pocketed his receipt and with one last glance at Abby, sauntered back out onto the landing. After he hit the elevator call button he stood to one side, where he glanced back at them from under those hooded eyes of his.

Abby pulled herself together and gestured at Suzanne, pointing at her lunch bag, trying to regain some semblance of normality. "Here you go."

"Thanks," Suzanne mumbled, reaching into the bag for the food, not moving her gaze from the view.

"No problem," Abby replied, also unable to force herself to look away.

"Now I know why you're always smiling, Suz," she whispered, "being out here on reception duty is so entertaining."

Suzanne shook her head. "They're not all like him, believe me."

The elevator doors opened. He saluted them one last time before stepping inside.

"I wouldn't turn down the chance to check him out." She watched as the doors slid shut and the numbers on the overhead panel began to descend. "But guys like that always do a runner when they find out what I do for a living. Most men can't cope with a woman who's an investment advisor, unless they're in the high finance business themselves."

"I can see how that might happen." Suzanne nodded, ruffling her curly hair in her hands. It immediately fell back into place.