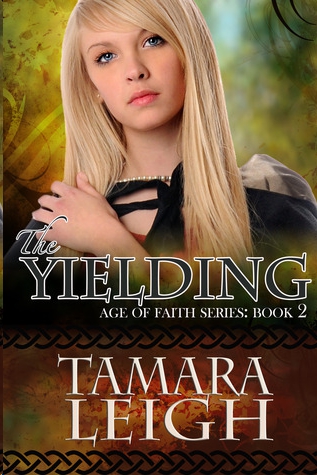 Book Two in the Age of Faith series

The Unveiling
, the first book in the Age of Faith series, introduced readers to the formidable Wulfrith family during Duke Henry’s battle for England’s throne in 1153. Now, four years later, Henry wears the crown, but the Wulfriths are no less defiant—and no more amenable to forging alliances through king-decreed marriage.

SHE HAD KILLED A MAN. OR SO IT WAS SAID…

Convent-bound Lady Beatrix Wulfrith is determined to aid her sister in escaping marriage to their family’s enemy. Unaware of the sacrifice that awaits her, she leads their pursuers astray only to meet with an accident that forever alters her destiny and takes the life of a young knight whose brother vows he will not rest until the lady is brought to justice.

Lord Michael D’Arci is a warrior and a womanizer whose foul mouth and impatience bode ill for all who trespass against him. Falsely accused of ravishment years earlier, he refuses to believe Lady Beatrix’s accusations against his deceased brother. However, when he finds himself at the mercy of that same woman who clings to her convictions and faith even when it threatens to prove her undoing, his quest for justice wavers.

*
Virgin Bride
is the sequel to
Warrior Bride

This novel is a work of fiction. Names, characters, places, incidents, and dialogues are either the product of the author’s imagination or are used fictitiously. Any resemblance to actual events, locales, organizations, or persons, living or dead, is entirely coincidental and beyond the intent of the author.

All rights reserved. This book is a copyrighted work and no part of it may be reproduced, stored, or transmitted in any form or by any means (electronic, mechanical, photographic, audio recording, or any information storage and retrieval system) without permission in writing from the author. The scanning, uploading, and distribution of this book via the Internet or any other means without the author’s permission is illegal and punishable by law. Thank you for supporting authors’ rights by purchasing only authorized editions.

To my all-time favorite heroes: David, Skyler, and Maxen.

I am so blessed.

By trickery they were had.

“Surely there is some mistake,” Beatrix’s mother protested.

The king’s man widened his stance, causing the dog sniffing at his boots to sidle away. “No mistake, Lady Isobel. We are to escort one of your daughters to Broehne Castle upon the barony of Abingdale where she will wed Baron Lavonne.”

Past a throat so constricted it hurt, Beatrix dragged a sustaining breath. She knew what this was—King Henry’s attempt to end the feuding between the Wulfriths and the Lavonnes. And she knew why. Though the two families had once been allies, the relationship had become strained following the accident that forced the old baron to pass his title and lands into the hands of his inept eldest son, Geoffrey. When Beatrix’s oldest brother had defiantly wed Lady Annyn Bretanne, whose betrothal the future King Henry had given to Geoffrey, it had gone from bad to worse. And worse yet when Geoffrey’s assault on Annyn resulted in the loss of his own life. Thus, for the past three years, the Wulfrith lands had been plagued with raids and pillagings devised by Geoffrey’s embittered father and younger brother as retribution for what they deemed an unjust death. And this was the solution—that the Wulfriths yield up a sister in place of Annyn. How King Henry must gloat to thus repay Garr Wulfrith for his defiance!

The king’s man cleared his throat. “’Tis for you to determine which of your daughters will join with Christian Lavonne, my lady.” He glanced at Gaenor, dismissed her with a lift of his eyebrows, and settled an appreciative smile on Beatrix.

She curled her hands into fists at his blatant disregard for Gaenor’s feelings.

“My youngest has chosen the Church,” Lady Isobel said, stepping to the edge of the dais.

The man inclined his head. “Aye, but she has yet to make her profession.”

Though Beatrix felt her mother’s disquiet deepen, Lady Isobel’s voice was deceptively level when next she spoke. “It is decided.”

After a long moment, the man sighed and once more looked to the oldest of the sisters. “Then ‘tis Lady Gaenor we shall have the privilege of escorting to Broehne Castle.”

Guilt flushed Beatrix. True, eldest daughters usually wed first, but she ached for Gaenor who had no say in whether or not she was the sacrifice King Henry demanded of the Wulfriths. And what a sacrifice!

Beatrix’s anger deepened at the thought of what Gaenor would endure wed to Geoffrey Lavonne’s brother, a man surely as cruel and vindictive as his infirm father.

“We shall avail ourselves of your hospitality this eve,” the king’s man said, “and depart at first light.”

Beatrix could stand it no longer. With a snap of her skirts, she stepped from the dais. “’Twas planned! King Henry summoned my brother to London that our sister might be stolen away and wed to that…miscreant!”

Years ago, Beatrix would have heeded her—indeed, would not so much as thought to challenge a man—but that was before Lady Annyn won Garr’s heart. Since, Beatrix had learned by her sister-in-law’s example that women did, indeed, have the right to question wrong.

Imagining what Annyn would do if not that she was laid abed abovestairs, Beatrix halted before the king’s man. Too late realizing she should have remained on the dais that had placed her nearer his height, she strained her neck to look up at him. “Is it not true that King Henry planned this, Sir Knight?”

He narrowed his lids, causing the torchlight reflected in his eyes to dim. “I cannot speak to the king’s intentions, my lady. I but carry out his orders, and this order is that I deliver one of Baron Wulfrith’s sisters to Baron Lavonne for the purpose of marriage.”

Beatrix looked to the man’s entourage. It was comprised of a dozen men, half of whom were said to belong to Christian Lavonne. As with each time she turned her eyes in their direction, her attention was drawn to a young, fair-haired knight whose gaze bore into hers with unsettling intensity. Though he was pleasing of face, something dark dwelt in his pale eyes.

“We shall require food and drink,” the king’s man said, “and pallets upon which to pass the eve in your hall.”

Beatrix swung around. “But, Mother, surely you will not allow—”

“Enough, Daughter! Our guests require hospitality, and we shall accord it as your brother would have us do.”

Beatrix drew a deep breath. “As you say.” She looked to Gaenor who had fixed her gaze on the rushes strewn before the dais. Feeling her sister’s churning and seeing it in the hands she balled in her skirts, Beatrix stepped toward her.

“While I see to our guests’ needs,” Lady Isobel said, “accompany your sister abovestairs and assist with her packing.”

Beatrix would have protested again, but the glimmer in her mother’s eyes told that she had a plan. King Henry would soon learn it was no easy feat to steal a daughter from this woman, even though it was by marriage only that she laid claim to the Wulfrith name.

Beatrix ascended the dais and laid a hand on her sister’s arm. “Come. There is much to do ere morn.”

Gaenor allowed herself to be guided across the hall that, if not for the arrival of the king’s men, would now be settled by the castle folk who made their beds here.

As the sisters neared the stairs, Beatrix peered over her shoulder at where her mother directed the servants to erect the trestle tables that had been put away following the evening meal. Praying Lady Isobel’s plan did not run aground, Beatrix started to look forward. As she did so, her eyes once more met those of the fair-haired knight.

He smiled—if that crooked, leering twist of the lips could be called such.

So affected was Beatrix by what it told of his impure thoughts that she stumbled on the first stair. If not for her grip on her sister’s arm, she would have dropped to her knees. However, Gaenor seemed too deep inside her thoughts to notice the few moments she supported her sister’s weight.

Once out of sight of the hall, Beatrix stepped in front of Gaenor. “Do not fear—”

“Do not?” Gaenor stood taller and thrust her shoulders back. “‘Tis easily said by one who has naught to fear herself. Look at you—you who are of pleasing face and height and form, you who would be better wed to a man than I. And yet, never will you be chained to a man’s whim. Nor his cruelty.”

Beatrix was acquainted with Gaenor’s feelings about her ungainly height, which had caused several suitors to look elsewhere, but never had she shown such resentment. But then, never had she been forced into marriage with a Lavonne.

Beatrix gently squeezed her sister’s arm. “Do not despair. Mother and Annyn will know what to do.”

Alone in the Kitchen with an Eggplant by Jenni Ferrari-Adler
Dancers in Mourning by Margery Allingham
The Playboy's Baby: A BWWM Pregnancy Romance by Blue, Tasha
Celtic Bride by Margo Maguire
The Open Door by Brian Brahm
The Evil That Men Do by Steve Rollins
Cast Iron Conviction (The Cast Iron Cooking Mysteries Book 2) by Jessica Beck
Special Circumstances by Sheldon Siegel
Extremely Famous by Heather Leigh
Nobody's by Rhea Wilde