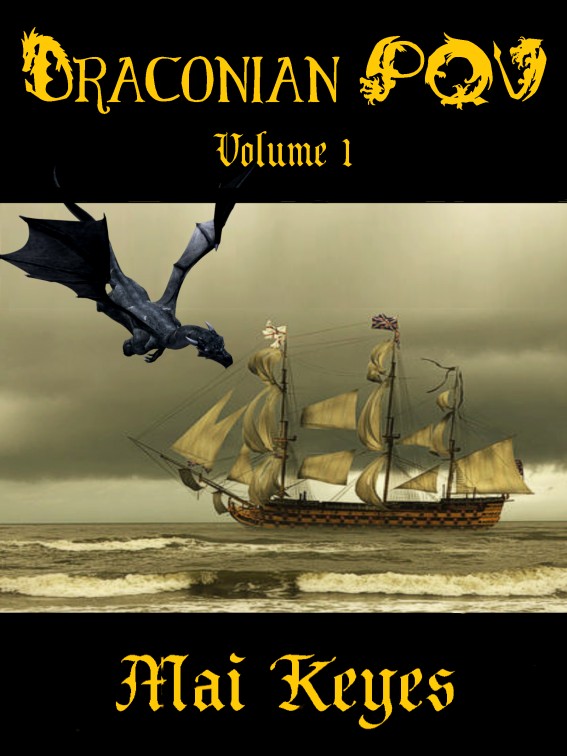 This is a Gryphon
Scribes
™
book.

This ebook may not be
re-sold or shared outside your household. Please ask your friends
to purchase their own copy. If you’re reading this book and did not
purchase it, please pay to help us grow! Thank you!

Once upon an Autumn evening, a dragon nest
lay hidden in tall weeds. The eggs inside were blanketed by soil
and mulch to keep them
cozy
at night
and safe from scavengers.

Fira, a
blue-tipped copper dragon, returned from feeding. She trotted
directly to her nest. This hunt was her first since setting her
clutch, and the experienced mother was eager to check the eggs.

She delicately
raked the protective compost off her large eggs. Fira tilted her
head, inspecting the nest side to side. She could not count
individuals. The dragon affirmed that all eggs were present by
recognizing their set pattern.

Reassured that no egg had been removed,
she next searched for signs of hatching. There were no fracture
lines on the thick shells. Still, Fira felt
juveniles
would soon emerge.

As she settled,
the dragon heard soft thuds rolling across the field. She stretched
up her four foot neck and peered. A shape came into view: a
horseman riding swiftly toward her.

For battle, no
doubt. The large steed neighed as it charged. Given that
blue-tipped copper dragons are wingless, this would be a battle
fought on land.

Not a problem.
She felt confident in her
heat-breath, reserved for these occasions.

Fira arched a toothy smile and reared to
meet the threat. She inhaled, then spewed
spiraling
flames at the horse. She anticipated this spooking the
horse and felling the combatant, for it was her best opening
tactic.

Only the animal
didn’t flinch. This steed was trained for warfare. It rushed
through the blaze, protected by plate metal and a sheared mane and
tail.

Vigilant, Fira
lashed her powerful tail, catching the plated horse with a wallop.
The steed braced, but flipped, scattering grass beneath his hooves.
Brown dust flew up around the impact.

The human, apparently
practiced
in falls, rolled away uninjured. He jumped up and
advanced with his silvery broadsword. The spear strapped to his
back twinkled in the diminishing daylight.

Now, Fira
attacked directly. She tried to keep a distance by using her tail
on him. A solid hit with the thin end could cut a man in two. This
method was not very accurate though, and the man was dressed in
agile chain armor.

When her
opponent dodged the tail strikes, she struck out with claws. The
warrior managed to deflect her swipes with his sword. The
frustrated dragon only obtained nicks on her deadly nails.

This scuffle
was far more arduous than foreseen. Fira decided to change her
tactics and lead the dragon hunter away from her clutch. She
scrambled away. The dragon hunter pursued.

The fight and
sprint were hard on the great, cold-blooded beast. Tiring, she
paused. Fira swung her head around and softly heated her own
wingless back with flame. As her blood warmed, her eyes scrutinized
the enemy who once again hurtled forward on horseback.

Fira readied to
emit an inferno, and was met by a flying lance. The hunter’s spear
pierced her throat. The ensuing pain was less important than the
other terrible fact: her heat-breath was blocked. The copper dragon
furiously scratched at the exposed pole. It would not be
dislodged.

Scarcely
breathing, she struggled with her human adversary until the chill
of nightfall brushed her hide. Realizing she hadn’t swathed her
clutch of eggs, Fira got a surge of vigor. The mother gathered her
failing strength, leapt, and sailed over horse and man.

The hunter saw
the error in her act and raised his broadsword. The blade cleaved
Fira’s underbelly. Her hind foot smacked the man to the ground as
she plummeted. Collapsing in weeds and tall grass, she made a
finale attempt to reach the eggs.

Only briefly
dazed, the man rose again to complete the slaying. The dissonance
of a horse’s whinny was Fira’s last perception.

Afterward
, the dragon hunter gawked at his kill. The
female’s body lay awry on the field. Its large, dead eyes stared
westward into the murky Autumn twilight.

The man remounted and steered his horse to
where the dragon’s gaze indicated. Hunters were obligated to
wipe-out
nests.

The clutch was
bare, exposed to the night – and him. The man might have broken
every shell, but what is a dragon hunter without dragons?

He heaped the
compost mound. The splendid, blue-tipped copper breed would live
on. Yet, he took one egg away.

The princess
would fancy a new pet.

A large ebony dragon stepped upon the
beach. Gaar stretched his
coal-colored
wings and raised his nostrils to breathe in the future
rain’s telling fragrance.

Gaar welcomed this situation. The weather
was perfect for hunting.
Humans
,
particularly. He grinned inwardly, knowing his scales matched the
dark clouds, and no sunshine meant his ominous form wouldn’t cast a
shadow.

He moved toward
the waves, his claws leaving ten-inch imprints in the sand. At the
shoreline, he leapt into the wind and flew in search of food.

Gaar had
formerly been satisfied by the giant fish and marine mammals that
teem the open water. The black dragon gained a taste for seafarers
after whalers slaughtered his mate. Months ago, her body washed
ashore bearing a harpoon with the stink of man.

The creatures
Gaar sot were, in truth, lifeless ships. Whaling ships were his
main target, distinguishable by harpoons. He saw harpoons as tines,
such as he had along his back. A key difference was harpoons could
be darted out, then drawn in.

This day, Gaar
would use all his skills.

After some
time, the male spotted a familiar outline on the ocean’s surface.
He subtly shifted, turning in the ship’s direction. Gaar swooped
in, avoiding narrow beams of sunlight.

Despite his
efforts, the humans began to shout. The creature they rode changed
course.

Infuriated by
detection in the face of stealth, the dragon roared. The water
beast roared back.

Gaar smugly
rolled out of the line of fire. He recognized the sound of canons
only as a creature defending its feeble passengers. Experience told
him that it had no defense to rear attacks. Assuming it to be a
blind spot, he dipped toward the ship’s stern.

Gaar knew how to stop this floating beast
of burden. He
maneuvered
to
attack its thin, pale wings. Shredding the wings would slow the
creature for sequenced assaults and would ensure that it didn’t try
to fly off in desperation.

Men scurried up
and down deck as he tore through the sails.

With the first
task complete, Gaar singled out a sailor standing on the creature’s
highest point.

The dragon’s
claws agilely snatched the screaming man. Gaar soared up into the
sky. Then, he slammed his prey down into the surf, stunning the man
and breaking his limbs.

He repeated
these moves to gather a second meal. By this time, the atmosphere
was nearly as dark as the dragon’s body. A drizzle encompassed the
scene, a precursor to the tempest.

His two catches
made a passable snack, but dragons always aim for the optimal
outcome. More rations would be best, Gaar thought, and he looped
back behind the ship.

This goal was a
mistake. He had not seen the stern cannon that the sailors were
preparing. This time, when approached, it roared.

Gaar almost
froze in place when he felt the orb punching through his wing. The
dragon tumbled from the air with a howl and crashed beneath the
waves.

The crew
hurriedly manned the harpoon and tried to aim. He was safe. No
sailor could see the black beast in the vast, inky water.

Shore dragons
are not swimmers, but Gaar knew he had to make it back to his cave.
His great head lifted above the surf as he angrily searched out his
rations.

Driven by pain
and parental obligations, he skewered his talons into one of the
drifting sailors before the waves swept the meal away. Imagining
the raging waters to be wind, the dragon dived as if he were in
typical flight. Below, the currents weren’t so forceful.

After what
seemed like an entire day, Gaar at last emerged on the beach. He
skulked out of the thrashing tide like a drenched cat, with a hole
in one wing and eyes stinging from brine.

After a brief rest, the dragon carried
his
meager
fodder into the cave. Gaar
brightened as joyful youngsters greeted him. Since the death of his
mate, he had to raise their second brood alone.

It would be
quite some time before he could fly. They would be settling for
small, coastline prey. Unpleasant for majestic dragons, perhaps,
but not dire. The young were nearly ready to hunt for
themselves.

As he settled
and watched their progeny, Gaar knew his mate would be pleased.